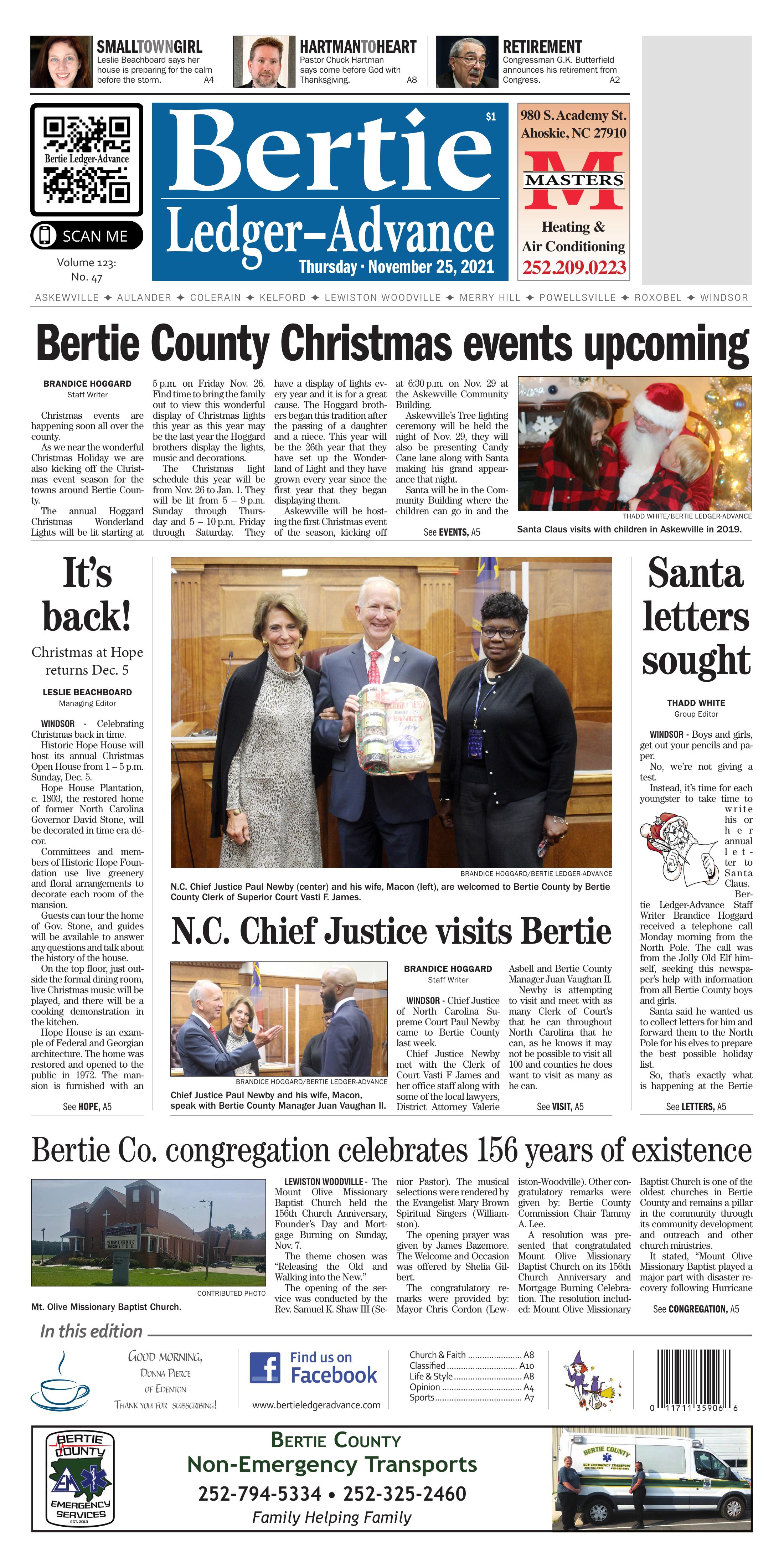 Santa Claus visits with children in Askewville in 2019.

Christmas events are happening soon all over the county.

As we near the wonderful Christmas Holiday we are also kicking off the Christmas event season for the towns around Bertie County.

The annual Hoggard Christmas Wonderland Lights will be lit starting at 5 p.m. on Friday Nov. 26. Find time to bring the family out to view this wonderful display of Christmas lights this year as this year may be the last year the Hoggard brothers display the lights, music and decorations.

The Christmas light schedule this year will be from Nov. 26 to Jan. 1. They will be lit from 5 – 9 p.m. Sunday through Thursday and 5 – 10 p.m. Friday through Saturday. They have a display of lights every year and it is for a great cause. The Hoggard brothers began this tradition after the passing of a daughter and a niece. This year will be the 26th year that they have set up the Wonderland of Light and they have grown every year since the first year that they began displaying them.

Askewville will be hosting the first Christmas event of the season, kicking off at 6:30 p.m. on Nov. 29 at the Askewville Community Building.

Askewville’s Tree lighting ceremony will be held the night of Nov. 29, they will also be presenting Candy Cane lane along with Santa making his grand appearance that night.

Santa will be in the Community Building where the children can go in and the parents take their picture with Santa and their child.

Windsor is having their Christmas Parade again this year!

Bring the family out at 3 p.m. on Thursday, Dec. 2 for the parade in Windsor. The parade line up will begin at the Bertie Campus of Martin Community College and come down Granville Street proceeding to King Street making a left turn onto York Street and end near Liverman Park and Mini Zoo.

If anybody would like to be entered into the parade as a float or anything else, contact Lewis Hoggard at the Windsor Chamber of Commerce at 252-794-4277.

Don’t miss out on Aulander’s Christmas Tree Lighting ceremony. Aulander will be hosting their tree lighting ceremony at 6:30 p.m. on Friday, Dec. 3 at the Aulander Community Building.

Don’t miss out on the Christmas Vendor Event being held from 8 a.m. to 2 p.m. Saturday, Dec. 4 at the old Bertie High School Gym. Attend the event and shop local to buy some Christmas presents for the family. There will be several different vendors there with a variety of different items to be purchased. Also, Santa and Grinch will be there and available for pictures to be taken.

There will be live holiday music, refreshments and horse wagon/carriage rides. There will also be performers in period costumes that will be dancing and playing games of the era.

Bertie County Arts Council is having their Holiday Bazaar and Open House from 5:30 – 7:30 p.m. Thursday, Dec. 9 and the Arts Council building. They will be having Christmas music, carriage rides and light refreshments. They will also be hosting a special guest which is local author Donna Campbell Smith with her latest book, My Neighbors From the Woods. Come out and enjoy the event of unique holiday shopping and warm community fellowship.

Carriage rides around the town of Windsor are going to be hosted again this year. They will be held from 6 – 8 p.m. starting Dec. 14 –16. Come out and enjoy a peaceful carriage ride through Windsor with the family.

Brandice Hoggard can be reached via email at bhoggard@ncweeklies.com.

Chief Justice Newby met with the Clerk of Court Vasti F James and her office staff along with some of the local lawyers, District Attorney Valerie Asbell and Bertie County Manager Juan Vaughan II.

Newby is attempting to visit and meet with as many Clerk of Court’s that he can throughout North Carolina that he can, as he knows it may not be possible to visit all 100 and counties he does want to visit as many as he can.

Chief Justice Newby received a Bachelor in Arts in Public Policy Studies from Duke University and a Juris Doctor from the University of North Carolina School of Law.

Chief Justice Newby’s main goal was to meet with the Clerk of Court and staff in the county along with the others that attended to let them know how important they are and they often times go unrecognized for their service.

Chief Justice Newby addressed the bonus that the Clerk of Courts will be receiving by the end of this year, the pay raise they will be receiving, along with some other goals that he plans to accomplish while he is in office.

The theme chosen was “Releasing the Old and Walking into the New.”

The opening of the service was conducted by the Rev. Samuel K. Shaw III (Senior Pastor). The musical selections were rendered by the Evangelist Mary Brown Spiritual Singers (Williamston).

The opening prayer was given by James Bazemore. The Welcome and Occasion was offered by Shelia Gilbert.

A resolution was presented that congratulated Mount Olive Missionary Baptist Church on its 156th Church Anniversary and Mortgage Burning Celebration. The resolution included: Mount Olive Missionary Baptist Church is one of the oldest churches in Bertie County and remains a pillar in the community through its community development and outreach and other church ministries.

“In conclusion, Bertie County wishes to honor and express gratitude to Mount Olive Missionary Baptist Church for its continued philanthropy to the citizens of Bertie County.”

N.C. Governor Roy Cooper wrote a congratulatory letter that stated Mount Olive Missionary Baptist Church and its parishioners have a history of serving the community and helping to improve the lives of many individuals every day. Best wishes were extended for continued success in future endeavors.

Congressman G. K. Butterfield (1st District NC) was invited to help the church celebrate 156th Church Anniversary and witness the mortgage building. Due to a need in serving his country and citizens, he was not able to attend.

However, a congratulatory letter was read that stated, “I extend my appreciation to you and the members of Mount Olive Missionary Baptist Church who have worked so diligently to provide spiritual leadership to the Bertie community. For years, your church has served as a catalyst for bringing positive changes in the lives of many and continues to extend beyond your spiritual calling.”

The scripture reading: Joshua 14:6-12 and the text of the message, “Unfinished Business.” It was stated that even though Mount Olive Missionary Baptist Church celebrates 156 years of existence and burning the church mortgage, “ou are not finished yet.”

Rev. Manley preached that God has more for Mount Olive Missionary Baptist Church to do and complete.

All members of the Mount Olive Missionary Baptist Church were dressed in Black and Gold attires to commemorate and celebrate our rich church history. On this special day a financial goal set was put in place to raise $12,000. With the help of family, friends, attendees, church members and the hands of God, the church exceeded and raised more than the set financial goal.

Lee — Founder) and reflections of the yearly financial reports in becoming debt free. It was announced that at the end of the service a wreath will be taken to the graveside and placed on the founder’s grave.

At the closing of the service, Anniversary Dinners were served to everyone by Juanita Lighthouse Catering Service (Windsor).

WINDSOR - Boys and girls, get out your pencils and paper.

No, we’re not giving a test.

Instead, it’s time for each youngster to take time to write his or her annual letter to Santa Claus.

Bertie Ledger-Advance Staff Writer Brandice Hoggard received a telephone call Monday morning from the North Pole. The call was from the Jolly Old Elf himself, seeking this newspaper’s help with information from all Bertie County boys and girls.

Santa said he wanted us to collect letters for him and forward them to the North Pole for his elves to prepare the best possible holiday list.

So, that’s exactly what is happening at the Bertie Ledger-Advance.

Beginning today, we are accepting our annual Letters to Santa from boys and girls who live or go to school here in Bertie County.

Letters should be submitted to:

Anyone wishing to use email to send the letters can do so by emailing bertienews@ncweeklies.com. Please make sure the subject line says “Letter to Santa.”

Those wishing to drop them off at the office should bring them to 109 South King St. in Windsor.

Those letters will be gathered and published in our Dec. 23 edition, as well as being forwarded to the North Pole.

Individuals wishing to submit letters should do so by 4 p.m. on Tuesday, Dec. 14.

Local school classrooms and daycares are also encouraged to work on a project together and submit them as a class. Those letters should be submitted by 4 p.m. Friday, Dec. 10.

WINDSOR - Celebrating Christmas back in time.

Committees and members of Historic Hope Foundation use live greenery and floral arrangements to decorate each room of the mansion.

Guests can tour the home of Gov. Stone, and guides will be available to answer any questions and talk about the history of the house.

On the top floor, just outside the formal dining room, live Christmas music will be played, and there will be a cooking demonstration in the kitchen.

Hope House is an example of Federal and Georgian architecture. The home was restored and opened to the public in 1972. The mansion is furnished with an extensive collection of original time era furnishings, including original books from Gov. Stone’s library.

The King-Bazemore House, c. 1763, will also be decorated in time-era Christmas décor.

The house will be open for visitors and a guide will be available to answer any questions and explain the history of the house.

The King-Bazemore House is one of the few remaining examples in North Carolina of mid-18th century “hall and parlor” design.

The home and outdoor kitchen have been restored and furnished based on the 1778 inventory of owner, William King.

Inside the J.J. Monk Harrington Convention Center there will also be activities to enjoy.

There will be live holiday music, cookies and hot apple cider.

Current exhibits will be on display and the gift shop will be open.

Horse and carriage rides will be available from house to house for guests.

The event is free, but donations are appreciated.