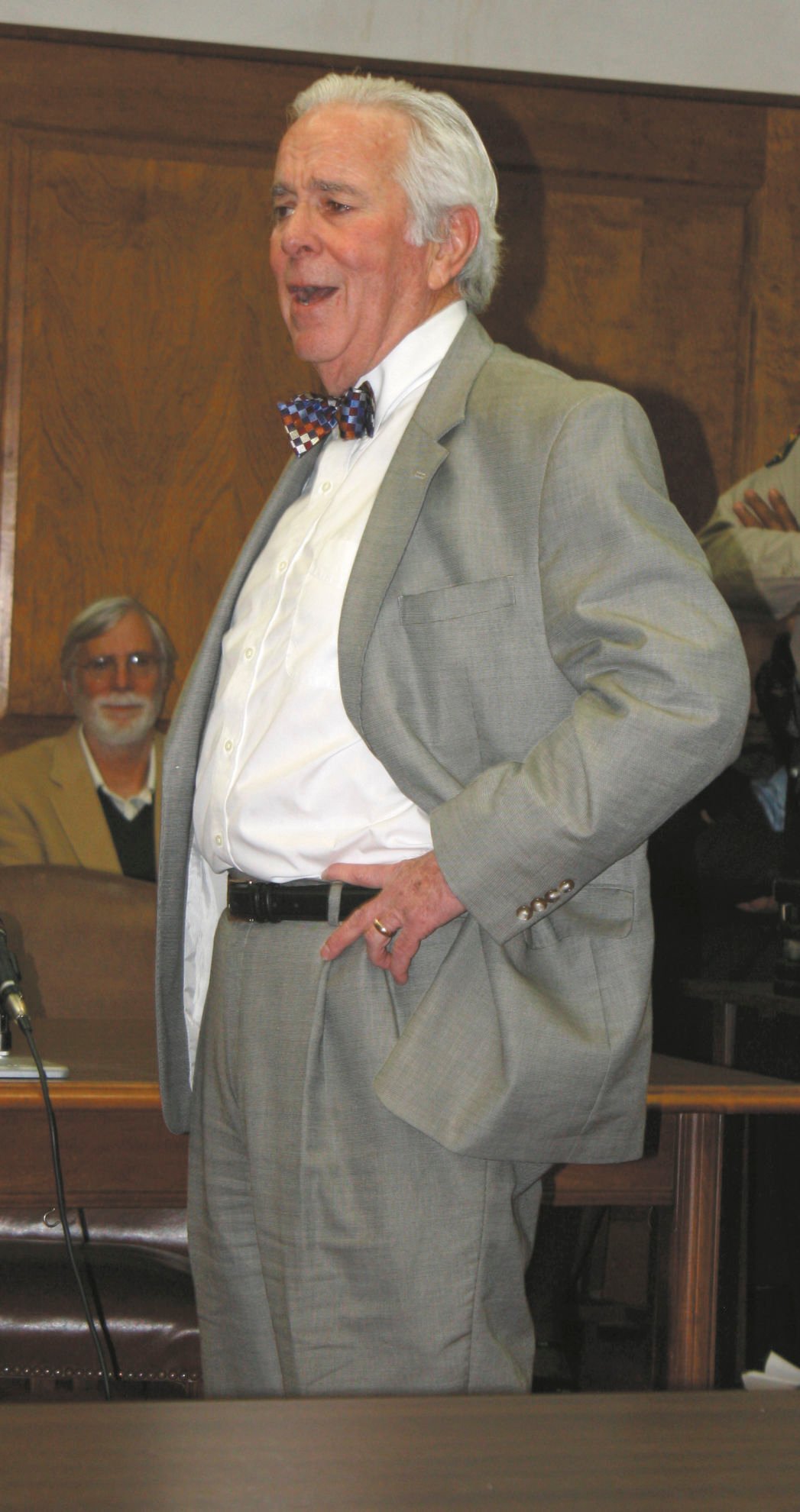 John Tyler during his retirement ceremony in 2014. 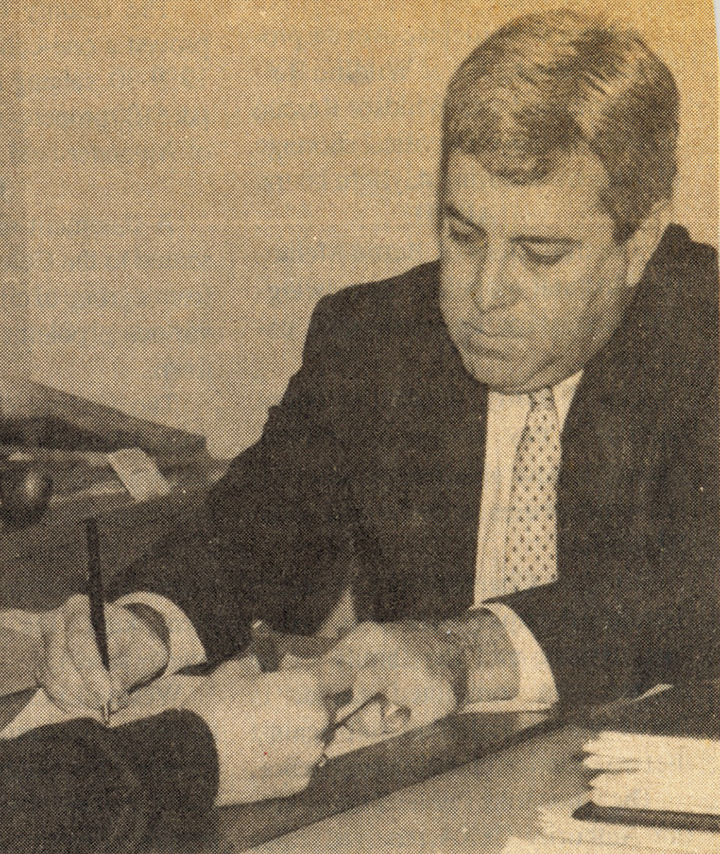 Earlier in his career, John C.P. Tyler files for election.

John Tyler during his retirement ceremony in 2014.

Earlier in his career, John C.P. Tyler files for election.

WINDSOR - He was the walking embodiment of public service.

John C.P. Tyler, or “Mr. Bow Tie” as some preferred, passed away on Tuesday, Oct. 5 leaving behind a legacy of service to God, his family and his fellow man.

Today, as he is honored at a memorial, he is being remembered as a man who gave his all to his fellow citizens, loved his family and made Bertie County a better place.

He served the people of Bertie County as Clerk of Superior Court from 1984 until his retirement 29 years later.

“Mr. Tyler (was) a truly southern gentleman and a great leader with a big heart,” said Bertie Clerk of Superior Court Vasti F. James, his hand-chosen successor. “He had a heart that cared for all people, especially the people of Bertie County. He treated everyone the same – with kindness and respect.

“When I was first appointed as the Clerk, people would still come in the office asking for the man with the “white hair and bow tie,” usually saying, ‘I was told to ask for Mr. Tyler. They said he can help me with (whatever the problem was)’,” she added. “He had the heart for people, was always willing to lend a hand and provide knowledge; going above and beyond. I am truly grateful that I was able to work with him for 17 years. He would always say, ‘just give them (the people) a kind word.’ How blessed we all are to have known him.”

Tyler said in his retirement in 2014, the feeling was mutual as he also loved the citizens of Bertie County.

“I have enjoyed every minute of it,” he said at the time. “I can’t begin to describe how good the people of Bertie County have been to me.”

A native of Roxobel, who was born on Aug. 7, 1945, Tyler is beloved in his home community.

“Tyler was a great guy,” Roxobel Mayor Gary Johnson said. “He was always fun to be around and always one of the good guys. How rare it is to be able to say that. I thought the world of him.”

After attending Bertie County Schools, Tyler went on to graduate from Christ School in Arden before enrolling at his beloved University of North Carolina at Chapel Hill. He graduated from Campbell University in 1972.

Tyler served as a magistrate and worked on the family farm and antique business before being appointed Clerk of Superior Court by Judge Richard Allsbrook in 1984. A year later, he was elected to a full term. He was opposed in his first two elections but never again in his nearly three decades of service.

“I remember John sitting on the steps outside the courthouse after his election,” retired Bertie County Manager Jack Williford said. “He had given his all and he was exhausted, but still won an easy victory over two opponents.”

Williford, who counted himself a close friend of Tyler’s, is also a Tar Heels fan and the two shared their passion – especially during Carolina basketball season.

“I will miss him. I already do,” Williford closed.

Tyler was well known for his genial manner, his desire to help the people of the county and his service as Clerk of Court, but he was involved in many other aspects of service. He served as a Roxobel Commissioner and on the board of Bertie County YMCA and Historic Hope Foundation. He was also on the board of Bertie Rural Health.

“If Bertie County ever built a Mount Rushmore-type monument, a sculpture not to be left off would be that of the Honorable John C.P. Tyler,” said Windsor/Bertie Chamber of Commerce Executive Director and presumptive future Windsor Mayor Lewis Hoggard. “You can travel across the state of North Carolina and people know John Tyler. He served Bertie County Clerk of Court with such distinction and charisma and left a positive impression on almost every individual he met. He met and left them with a smile.

“Whether talking about sports, history, characters or time, John was the consummate conversationalist,” Hoggard added. “He was not just a storyteller, but a person who drew you into the stories and made you part of them. He served our county with integrity and service for all citizens. He was truly a gentleman and a scholar.”

In addition to his service to his community, Tyler was well known for his love for his family and his desire to spend time with his children and grandchildren. He kept a portrait of his beloved grandfather, Ernest Rudolph Tyler, in his courthouse office.

“I am heartbroken over the passing of John Tyler,” she said. “I met John over 28 years ago and since that time, John has been a mentor and second father to me. I am extremely blessed and honored to be able to call John my friend and, quite frankly, I cannot imagine a world without him in it. We had a true friendship that is rare these days.

“John was a true Southern gentleman and his contributions to the citizens of Bertie County and North Carolina are immeasurable,” she continued. “John was the true example of a public servant. I will always admire how he never judged or forced his opinions on anyone, but offered valuable and truthful advice that I will surely miss.”

Asbell continued, “John was loving and beautifully authentic and his magnetic smile and contagious laugh will be missed by all that knew him.”

Tyler is survived by his wife, Marjorie “Marti” Tyler as well as a son, Ernest Rutland Tyler, and a daughter, Marjorie Tyler Bridges as well as a host of other family and friends. A complete obituary is found on page A2.

A memorial is planned for 4 p.m. Thursday, Oct. 14 at St. Thomas’ Episcopal Church in Windsor.