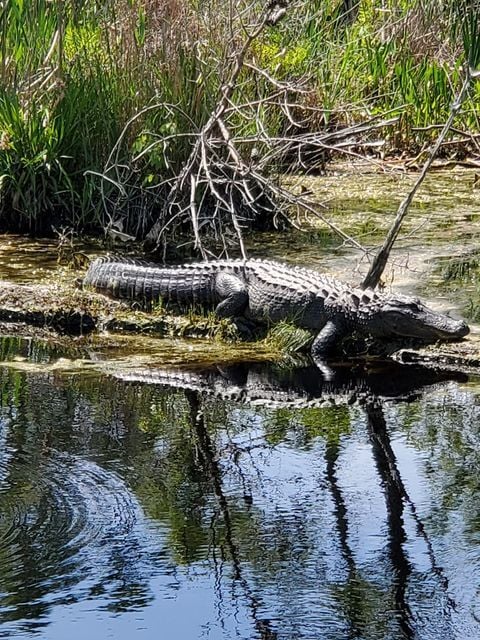 An alligator suns itself in Tyrreell County recently. The photo was taken about 2 miles before reaching the Alligator River, along US 64. 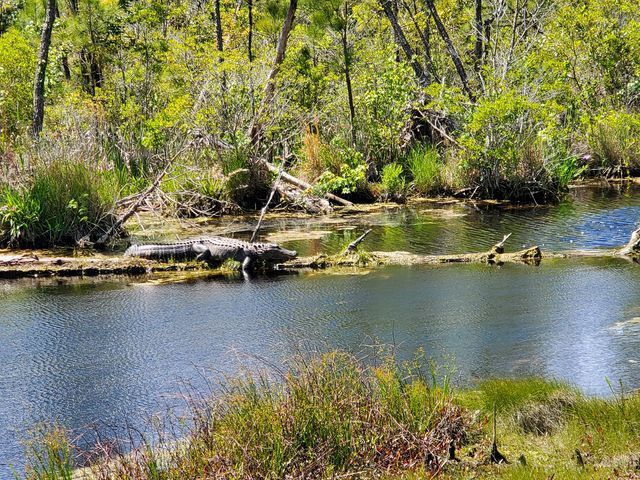 An alligator suns itself in Tyrreell County recently. The photo was taken about 2 miles before reaching the Alligator River, along US 64.

According to Lane, the photographs of the alligator sunning itself on a fallen pine tree were taken about 2 miles before reaching the Alligator River, via US 64. It appeared to be 5 to 6 feet long.

Alligators are actually native to North Carolina. Robust populations of them are in the southern coastal counties.

While it is rare, some alligators can be found in North Carolina’s interior, like near Raleigh. A 7.5-foot alligator was found in May 2020 in Wake County. It was captured from a pond on Hilltop Road in Fuquay-Varina, Greg Batts, a wildlife biologist with the North Carolina Wildlife Resources Commission.

Alligators’ health can be an indicator of contamination in their habitats, much like a canary signally to miners that the mine’s air is toxic.

According to a recent report in the Fayetteville Observer, researchers have found evidence that exposure to per- and polyfluoroalkyl substances, or PFAS, could harm an animal’s immune system.

Alligators in the lower Cape Fear River had changes in their immune system that could indicate the development of autoimmune-like diseases in response to exposure to high-levels of the contaminants, according to information presented at a forum related to the PFAS compound.

The PFAS family of chemicals has been used in products such as cookware, food packaging, stain repellents and other products.

The PFAS group of chemicals includes GenX, which is manufactured by the Chemours company at its Bladen County plant. GenX has been connected to cancer and other diseases in animal studies, but it isn’t known if the effect is the same on humans.