You are the owner of this article.
Edit Article Add New Article
Home
News
Sports
Lifestyles
Opinion
Obituaries
Multimedia
Classifieds
Calendar
Our Publications
Share This
1 of 5 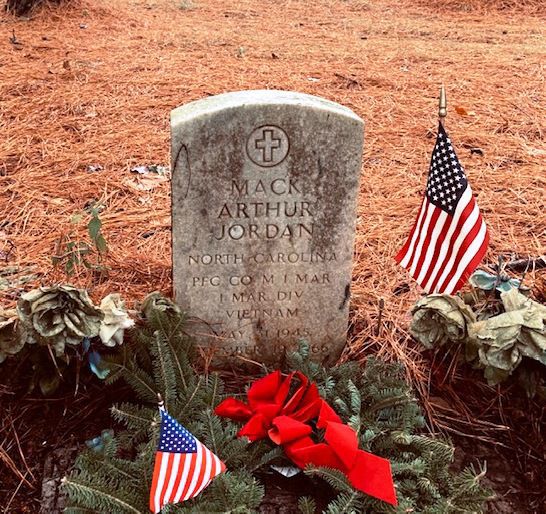 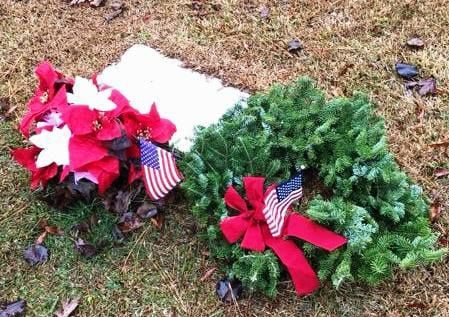 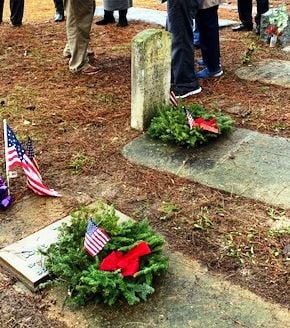 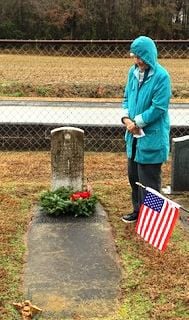 Barbara Wood pauses after placing a wreath on the grave of SSGT-E5 Herman Earl Lassiter (US Army). 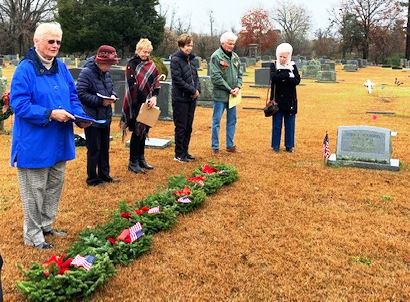 Barbara Wood pauses after placing a wreath on the grave of SSGT-E5 Herman Earl Lassiter (US Army).

“Remember the fallen, honor those who serve.” Edenton Tea Party Chapter First Vice Regent Beth Taylor has announced that this year, for the first time, the chapter will be participating in Wreaths Across America (WAA.)

Chapter members, friends and family met at 10 a.m. Dec. 14 for a brief ceremony at the grave of 1st. Lt. John Hutchings Winborne (US Army), buried at Beaver Hill Cemetery, Edenton. He was born Nov. 4, 1945, and died Oct. 2, 1970. Edenton Tea Party Chapter member Marianne Miller, assisted by Craig Miller laid a wreath and placed a flag on his grave. Bobby Winborne, brother to Lt. Winborne also was in attendance.

Those assembled were welcomed by chairman of the event Beth Taylor, and Chapter Chaplain Clara King offered prayers. An introduction was given by Anne Rowe, Regent, Edenton Tea Party Chapter, and chapter member Pat Bivens, a Vietnam-era US Navy JAG veteran gave remarks. Craig Miller, a US Army Vietnam veteran also brought moving remarks, and Sue House, a chapter member, and a US Navy Vietnam-era veteran nurse, because she was unable to attend, sent remarks that were read by Mrs. Taylor.

After this brief ceremony at Beaver Hill, chapter members dispersed for additional wreath-laying ceremonies at the graves of the other five veterans. According to Sir Terry Pratchett, a British novelist and writer famous for the Discworld series, “Do you not know that a man is not dead while his name is still spoken?” Therefore, at each grave, an American flag was placed with the wreath and the veterans’ name was spoken aloud.

Those buried at Warren Grove Cemetery, NC 32 North, Edenton, are:

Wreaths Across America was founded 25 years ago. Toward the end of the holiday season in 1992, the founders, Morrill and Karen Worcester, of Worcester Wreaths in Harrington, Maine, had a surplus of wreaths. They decided to place the wreaths in the older section of Arlington National Cemetery, a section that receives fewer visitors with each passing year.

As plans were underway, several other individuals and organizations stepped up to help. The owner of a local trucking company generously provided transportation all the way to Virginia. Volunteers from the local American Legion and VFW Posts gathered with members of the community to decorate each wreath with traditional red, hand-tied bows.

Members of the Maine State Society of Washington, DC, helped to organize the wreath-laying at Arlington, which included a special ceremony at the Tomb of the Unknown Soldier. This quiet, annual tribute went on for years, until 2005 when a photo of the stones at Arlington, adorned with wreaths and covered in snow, circulated around the internet.

Suddenly, the project received national attention. Thousands of requests poured in from all over the country, from people wanting to help lay wreaths at Arlington, or to bring the Arlington project to their local cemetery. In 2014, Wreaths Across America and its national network of volunteers laid over 700,000 memorial wreaths at 1,000 locations in the United States and beyond, including ceremonies at the Pearl Harbor Memorial, as well as Bunker Hill, Valley Forge and the sites of the Sept. 11,2001, tragedies. This was accomplished with help from 2,047 fundraising groups, corporate contributions, and donations of trucking, shipping, and thousands of helping hands.

On Saturday, Dec. 14, volunteers laid 253,000 wreaths at Arlington National Cemetery. Each name of each veteran will be said aloud. Why do we do it? We have Veterans Day and Memorial Day, but our service members sacrificed their lives and safety every single day of the year to preserve our freedoms. This year there will be 1,600 participating locations to show our veterans and their families that we will not forget – we will never forget.

Today, WAA is a national movement that takes place every year on National Wreaths Across America Day. And, this year, our Edenton Tea Party Chapter was part of it! Our wreaths were purchased through the American Legion Edward G. Bond Post 40.

The National Society Daughters of the American Revolution, founded in 1890 and headquartered in Washington, D.C., is one of the most inclusive genealogical societies in the country. It is a non-profit, non-political volunteer women’s service organization dedicated to promoting patriotism, preserving American history, and securing America’s future through better education for children.

Any woman 18 years or older — regardless of race, religion, or ethnic background — who can prove lineal descent from a patriot of the American Revolution, is eligible for membership. If you believe you may be eligible for membership, you should contact Edenton Tea Party Chapter Registrar Candy Roth – 252-548-2648 or Membership Chairman Beth Taylor – 252-482-3592 for additional information. You may also go to the Chapter Website; http://www.ncdar.org/EdentonTeaParty_files/ or the Facebook page — https://www.facebook.com/EdentonTeaPartyNSDAR/