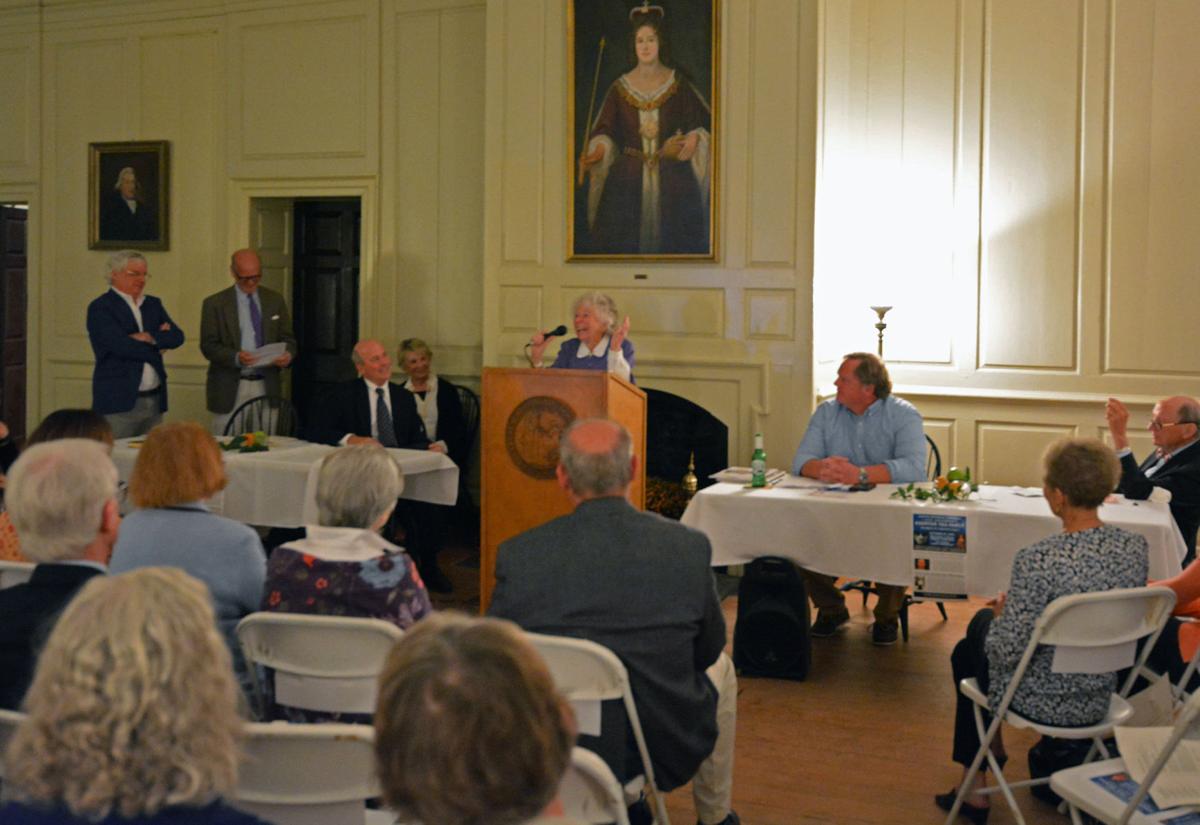 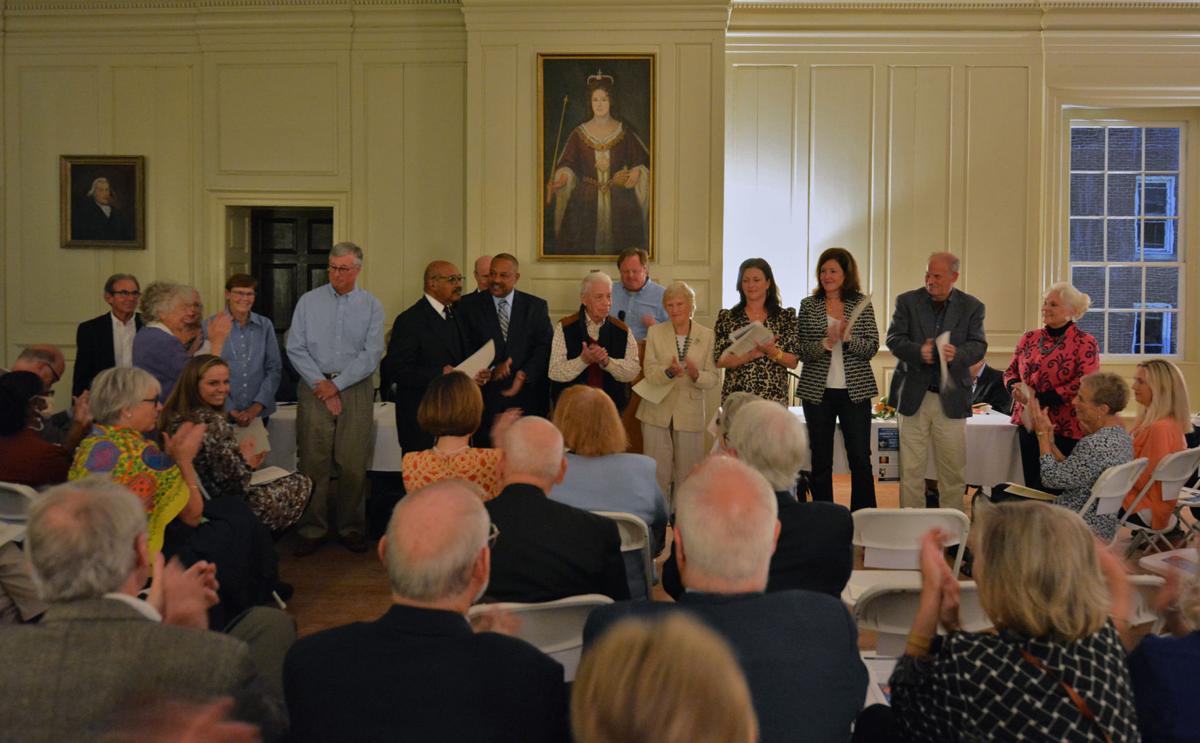 Recipients of the Preservation Awards at the inaugural Bricks & Boards Awards ceremony.

Recipients of the Preservation Awards at the inaugural Bricks & Boards Awards ceremony.

EDENTON - And the award goes to…

Given the profound historical and architectural legacy of Edenton, and the expansive heritage of the area, the Edenton Historical Commission decided it was time to honor those in the community who have been involved with the maintenance and restoration of said history.

The historic 1767 Chowan County Courthouse played host to the inaugural Bricks & Boards Awards on Tuesday, Oct. 19. The result was a sentimental and cordial evening of reflection and tributes.

The awards were dedicated to celebrating the preservation and restoration efforts of numerous individuals and families in Chowan County. The event was presented by Tom Newbern, outgoing chairman of the Edenton Historical Commission, as well as Sally Francis Kehayes and Dawson Tyler, who are both commissioners on the EHC.

Awards were given in three categories of preservation and restoration: homes, commercial structures and institutions.

“This is not a competition at all,” Kehayes said. “We want to encourage everyone involved in restoration and preservation.”

Also awarded Tuesday evening were a handful of community figures who played crucial roles in the evolution of preservative and restorative projects throughout the county. Special awards were also given for research aligning with the history of the area.

Kehayes presented the first award of the night to Peggy Troxell and Gay Davenport, of Hillsborough and Farmville, respectively. Troxell and Davenport were recognized for their research and efforts that resulted in 51 North Carolina women — involved in the Edenton Tea Party — being named as “Patriots” by the National Society Daughters of the American Revolution.

Troxell accepted the award on behalf of Davenport and herself.

“I have a passion for Penelope Barker and her ladies of Edenton,” Troxell said. “This means so much to me, you’ll never know.”

Dawson Tyler took to the podium to thank those in attendance and address the ceremony as a good change for the EHC.

“With the Commission taking this step, we are trying to broaden the net beyond our town and that is our goal. Thank you all for being here,” Tyler said. “We all live in places that are ancient for America. We are very proud of them and the stories they tell. These buildings are some of the only ways we can still touch and interact with history. It’s what’s left and it’s to be celebrated.”

Tyler then went on to present all of the awards for preservation and restoration.

The awards were conferred included:

- Preservation, Institution: Gay Chatham and Vonna O’Neill for the 1758 Cupola House and Association.

- Preservation, Residential: Nancy and Keith Sorensen for the 1764 Coffield House.

- Preservation, Residential: Sarah and Larry McLaughlin for the 1896 Butternut Farm.

- Restoration, Residential: Stephanie and Joe Wach for the 1790 Littlejohn-Byrum House.

Following the preservation and restoration categories, four special awards were handed out to several in attendance.

Tom Newbern bestowed the Publications Supporting Preservation Award to Linda Tiller, President of the Edenton Woman’s Club. Tiller accepted graciously and thanked those in attendance for their support.

“If you take the word history apart, it says ‘hi story’ and Edenton is a wonderful, magical story,” Tiller said.

“They have produced work comparable with Colonial Williamsburg and they have been highly regarded as a result of their research and publications,” Dixon said.

Robert Quinn, former town council member and current EHC commissioner, awarded Anne-Marie Knighton with the Career Achievement in Preservation. The award recognized Knighton and her leadership in preservation throughout her 33-year tenure as Edenton Town Manager.

“Despite distractions that came along, like Hurricane Isabel, and continued other challenges, our progress grew and she fought for our town with creative energy,” Quinn said of Knighton. “She continually encouraged our staff, the council, police and public works winning grant upon grant. Her leadership has kept us safe, beautiful, clean and secure.”

Knighton took the podium and offered a few words in acceptance of the career achievement.

“I have been blessed. Edenton has blessed me,” she said. “I look around the room and see all of my friends and colleagues. I am humbled by this award and I appreciate it dearly.”

The final award of the night, the Lifetime Achievement in Preservation and Restoration, was awarded by Sam Dixon to the Thomas Benbury Haughton Wood family — and particularly Virginia Wood — for their work in restoring significant structures in Chowan County.

Six properties were mentioned as being preserved or restored by the Wood family, including most notably, Greenfield, constructed around 1752.

“Greenfield became Mama’s project,” said Benbury Wood of his mother. “She had the house rewired, shined up the floors and cleaned the mural. For the first time in its 232 year history, the house had a working central heating and air conditioning system.”

Virginia Wood’s work was noted as encouraging for the community at-large and paved the way for others to follow in her restorative footsteps.

“She has contributed more to the restoration and preservation of Chowan County than anyone I know,” Dixon said.

Accepting the award to a standing ovation, Virginia Wood, 91, offered few yet saccharine words to her family and friends in attendance.

“I just want to say thank you all for this and I love you all,” she said.