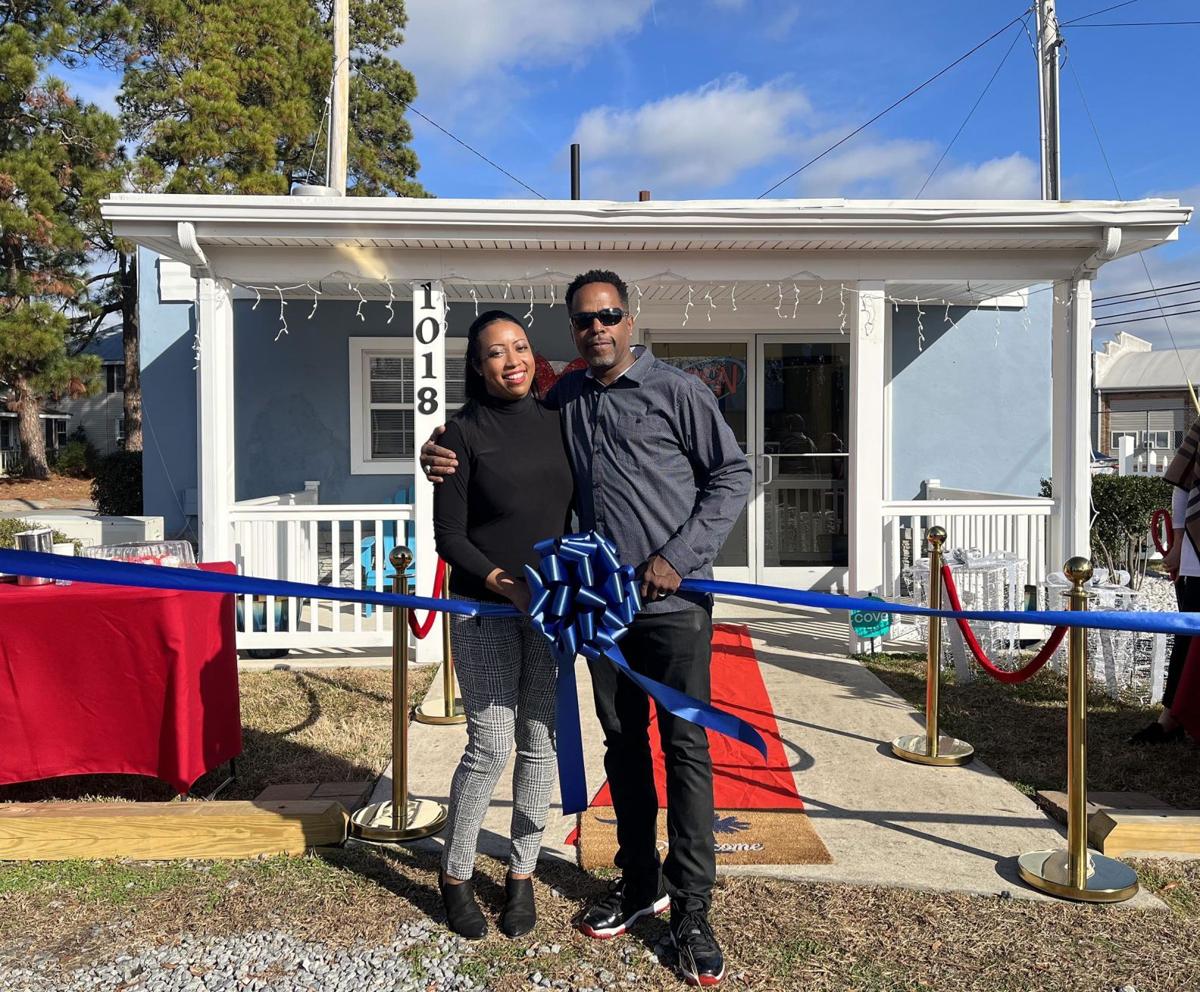 Keana Green-Overton and Carl Overton stand in front of their new restaurant, Inner Banks BBQ, during its Dec. 17 grand opening at the corner of North Broad and North Oakum streets in Edenton. 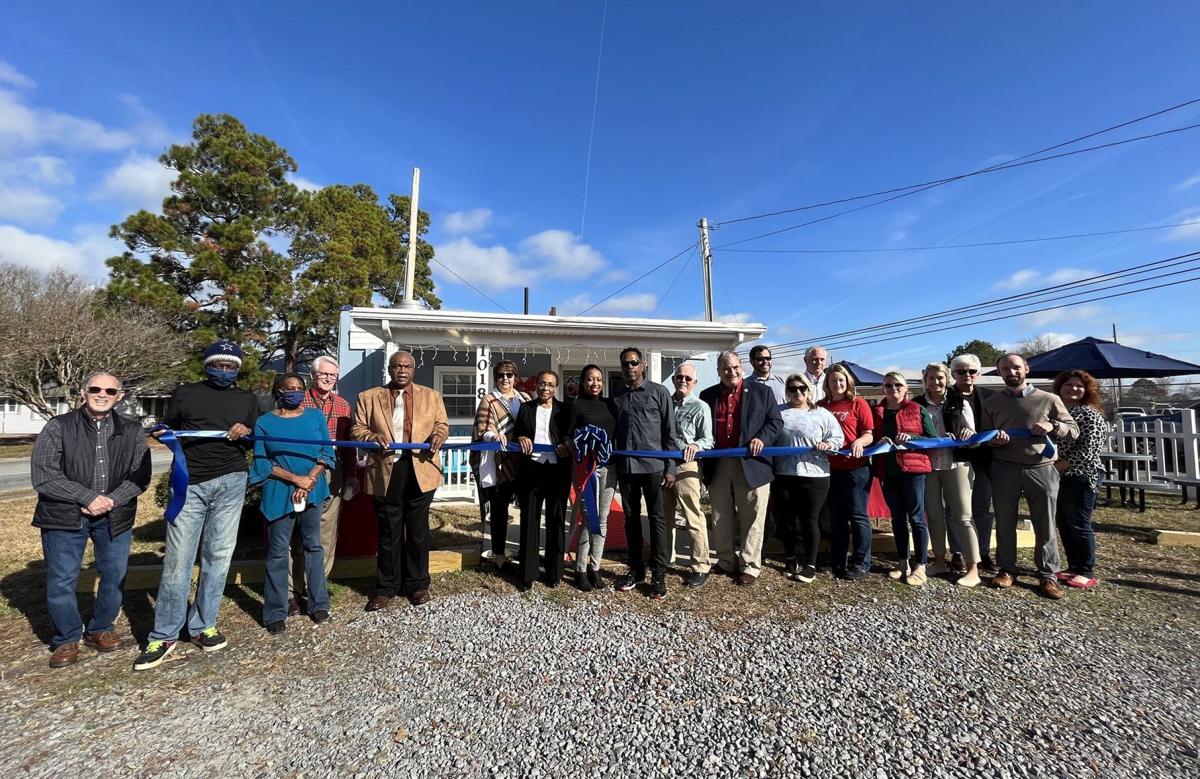 An assembled crowd of local leaders gathers before the ribbon-cutting at Inner Banks BBQ on Dec. 17.

Keana Green-Overton and Carl Overton stand in front of their new restaurant, Inner Banks BBQ, during its Dec. 17 grand opening at the corner of North Broad and North Oakum streets in Edenton.

An assembled crowd of local leaders gathers before the ribbon-cutting at Inner Banks BBQ on Dec. 17.

Situated at the corner of North Broad Street and North Oakum Street, the new BBQ is owned by Carl Overton and his wife, Keana Green-Overton.

Moving from Maryland to open the restaurant in Edenton, Carl Overton says it is his first time starting a business like this.

He is, however, no stranger to Edenton. The Overtons are descendants of the Badham family, a legendary line of African American carpenters from the turn of the 20th century.

“This is my first time getting into the food business,” Overton said. “We’re filling the needs of the community with something that’s different.”

Overton stressed that he wants his business to be a place that folks can come and relax and enjoy good food.

“This is where everyone can come and sit down and enjoy. They can take a moment to decompress and have some good food,” he says.

Overton’s wife, Keana Green-Overton, was on hand before the grand opening to explain the couple’s vision further.

“We’re going for a sweet and sassy style in cooking. Something homestyle, not necessarily greasy soul food,” Green-Overton said. “We first decided to open this place after we came down to get our house up and running. I drove into town and expected good food, being in North Carolina and all, and I saw there were not a lot of choices around for me to eat.”

She continued, “The opportunity presented itself. We talked with the owner of the property and took off from there.”

The food, Green-Overton says, is not as “heavy” as soul food and does not rely on fried chicken as the staple. Rather, the focus is on the pulled pork and pulled chicken, which she says slow cooks for over 12 hours using a vinegar base: Eastern North Carolina cooking at its finest.

In addition to the meats, sides of macaroni and cheese, cabbage, green beans and sweet potato can be found inside.

Looking to shake things up with more diverse offerings in town, Green-Overton emphasized the eatery’s smoothies, all of which are made on-site with fresh ingredients.

The BBQ’s soft opening on Dec. 10 was a massive success, according to the couple.

“The day we had our [soft] opening, the line was wrapped around the corner,” Green-Overton said. “The day after, during the Christmas parade, was the same. We were packed all day.”

Green-Overton said she is thankful that her and her husband were able to secure such a prominent spot for a business.

The restaurant is not only at the corner of a busy intersection – just off of U.S. 17 – but it also finds itself within close proximity to many local businesses as well as the Oakum Street residential corridor.

The grand opening attracted a teeming crowd, eager to see what all of the buzz was about in North Edenton.

Mayor Pro Tem Elton Bond, speaking on behalf of the town of Edenton, welcomed the couple and their new business to town.

“This is like coming back home,” Bond said. “They are my neighbors. You could’ve chosen anywhere to retire and you came to our little country town. Thank you.”

Chowan Board of Commissioners Chairman Bob Kirby also issued a warm welcome, thanking the pair for putting their faith in Edenton.

Kirby complimented the owners on the samples of food passed around.

“You’re doing it right,” Kirby said. “When you’re ready to open a franchise in Rocky Hock – my district – come on down. I’m ecstatic for another eatery in the community.”

After the crowd had assembled, the big red scissors snapped away and the ribbon was cut.

Tyler Newman can be reached via email at tnewman@apgenc.com.