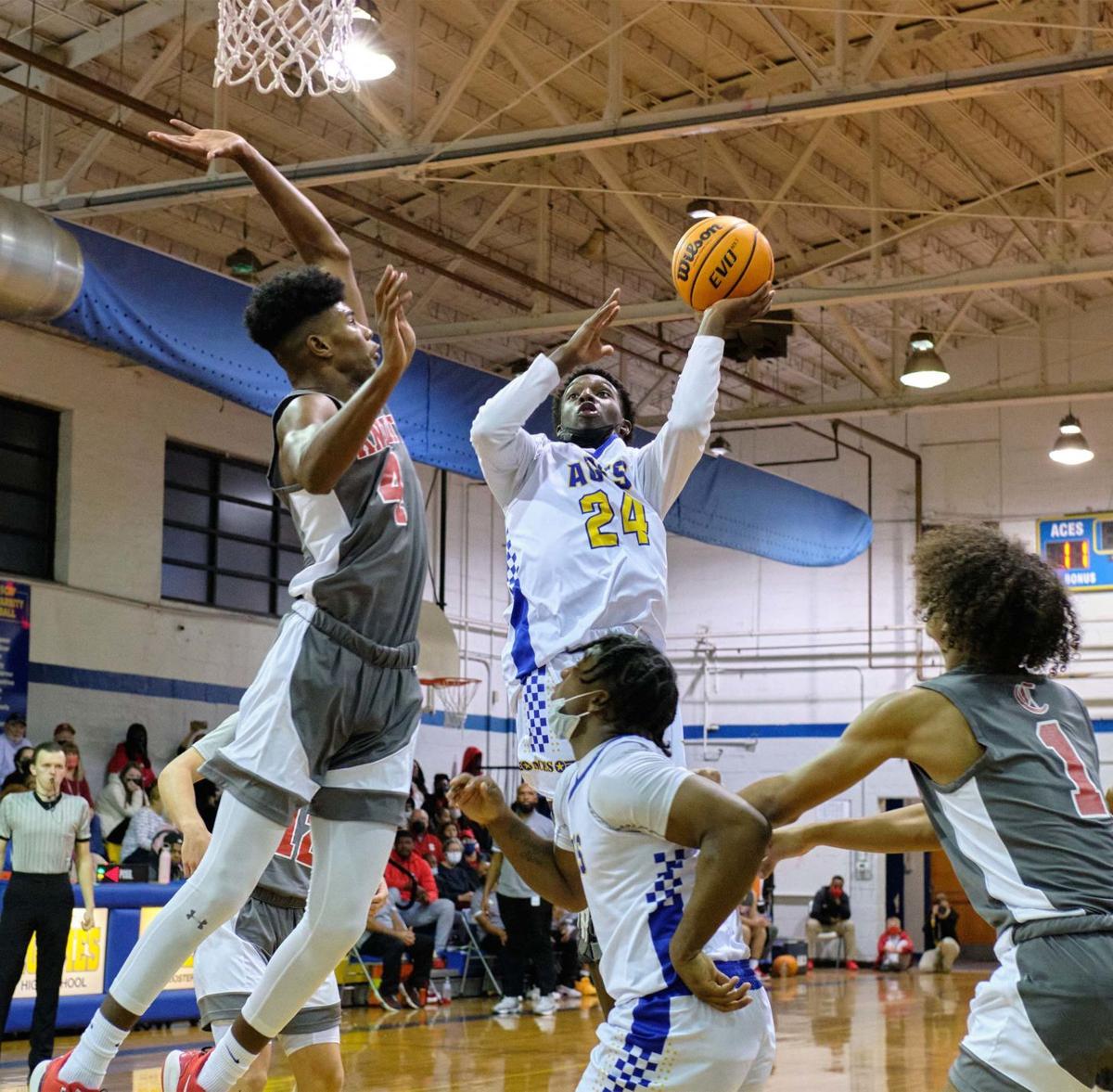 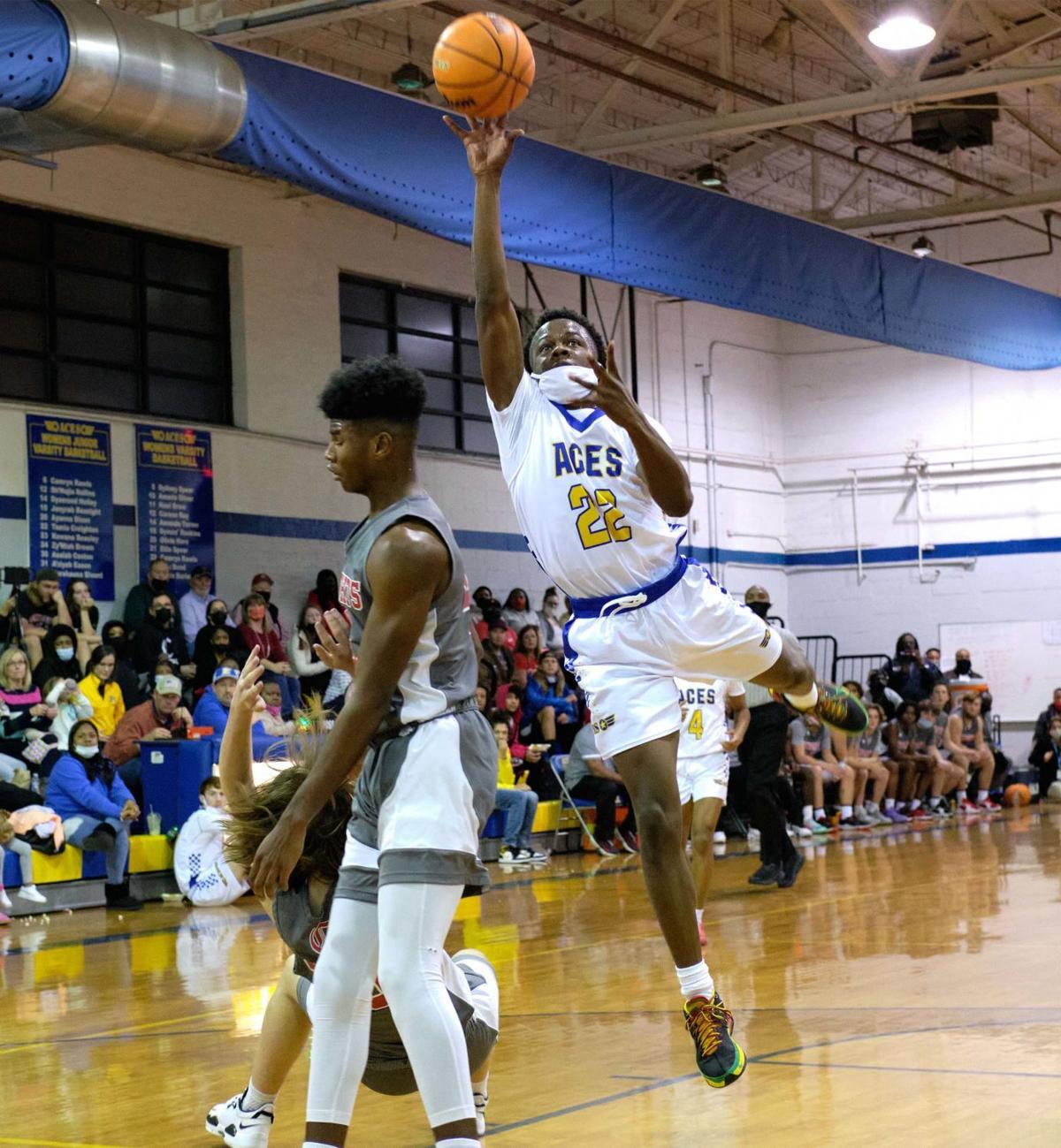 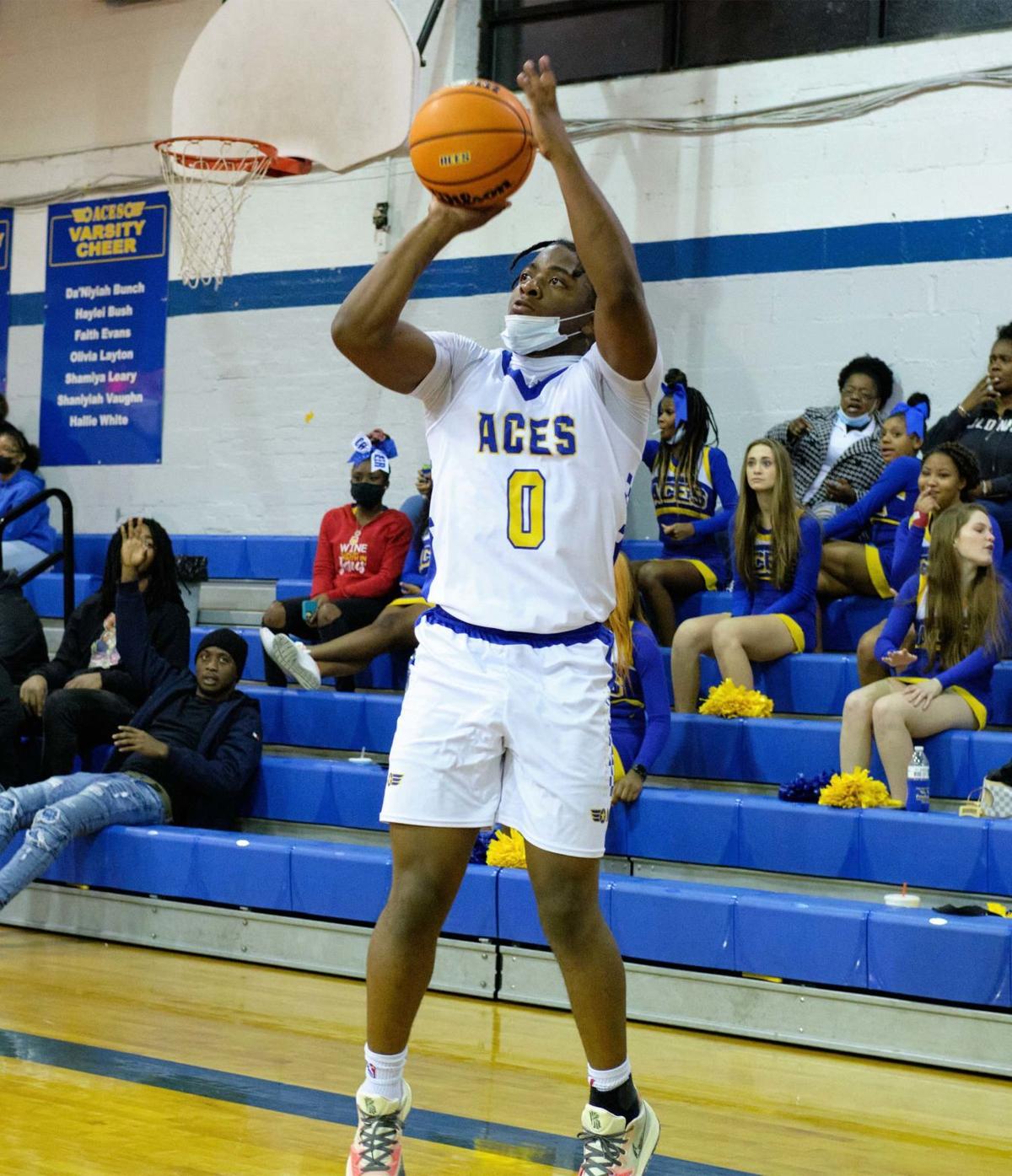 Aces' Quan Twine hits one of his three 3-pointers.

Aces' Quan Twine hits one of his three 3-pointers.

The Knights came for one purpose, to defeat the Aces at home. That purpose was fulfilled as the Knights slipped by Holmes, 45-32.

Currituck’s first score came from a monster dunk by 6’-6” senior Ernest Harris within the first 15 seconds of the tipoff. On the following possession, the Knights Carmillo Burton banged a trey to give Currituck a quick 5-0 lead.

Minutes later, the Knights would send Ireal Hill to the free throw line for two shots. Hill was only able to make both baskets, upgrading the scoreboard to 5-2 Currituck.

Harris was fouled en route to the basket and only salvaged one of two free throw attempts, but Currituck increased it’s lead, 6-2.

Matt Winbourne chimed in with a three-pointer, bringing Holmes within one point. But that would be as close as the Aces would come. The Knights had a six-point run, bringing the quarter to end with the Knights leading 12-5.

The Knights defense rendered the Aces inside offensive game basically unusable. The Knights were long, tall and rotated extremely efficiently, making inside plays hard to come by.

Almost two minutes had elapsed before either team scored.

At the 5:58 mark, R.J. Seymore broke the spell for the Knights with a two-point basket. Teammate Tanner Dowdey followed suit with an additional two points. The Aces found themselves behind 16-5 and called a time-out.

Following the Holmes’ timeout, the Knights would go on a quick five point streak, which consisted of a three-pointer from Christopher Iorio and a two points from Burton, increasing the Knights lead to 21-5.

The Aces finally found the inside of the rim after almost four minutes of play. Naijhar White stopped that drought with a two point basket, modifying the scoreboard to 21-7.

Winbourne was fouled during a made basket, but could not sink the free shot from the free throw line. The Aces were only able to score a total of six in the second quarter. Their last basket was scored by White with 1:07 left to play in the first half.

Meanwhile Currituck would continue scoring, ending the first half leading 27-11.

The Aces seemed determined and rejuvenated at the start of the third quarter. Their aggressive defense placed Knights’ sophomore Luke Morgan on the free throw line back to back. Morgan only made two points out of potentially four and increased Currituck’s lead, 30-11.

Aces’ senior Quan Twine found a spot in three-point land that boosted the team’s score to 30-14. Currituck’s offensive unit seemed to have stalled in the third quarter. The Knights would only score one more time.

The Aces chiseled at the lead with baskets from White and Hill.

A mixture of good defense, bad shot selection and missed shots ended the third quarter with the Knights still leading, 32-18.

Harris, who had been pretty quiet since his dunk in the first quarter, added two-points for the Knights.

Twine found another spot, deep in three-point territory and flushed a trey through the rim. Twine reloaded, set his sights again and banged another trifecta with 4:56 left in regulation, revising the scoreboard to 34-26 in Currituck’s favor.

The Knights answered back with an eight-point surge, running the score up 42-26.

The Aces’ finally stopped the scoring frenzy of the Knights, with a basket from Hill and a timeout taken with 2:25 left to play and the Aces still behind 42-28.

Burton was quickly fouled by the Aces to stop the clock. But Burton cashed in the two free throws.

Currituck was forced to use a timeout to save possession as one of its players was trapped by the Aces’ defense. Subsequently Knights K.J. Skinner was fouled after the time out and only made one basket.

The Aces’ Hill scored the last two baskets before the buzzer sounded.

Andre’ Alfred can be reached via email at aalfred@ncweeklies.com.