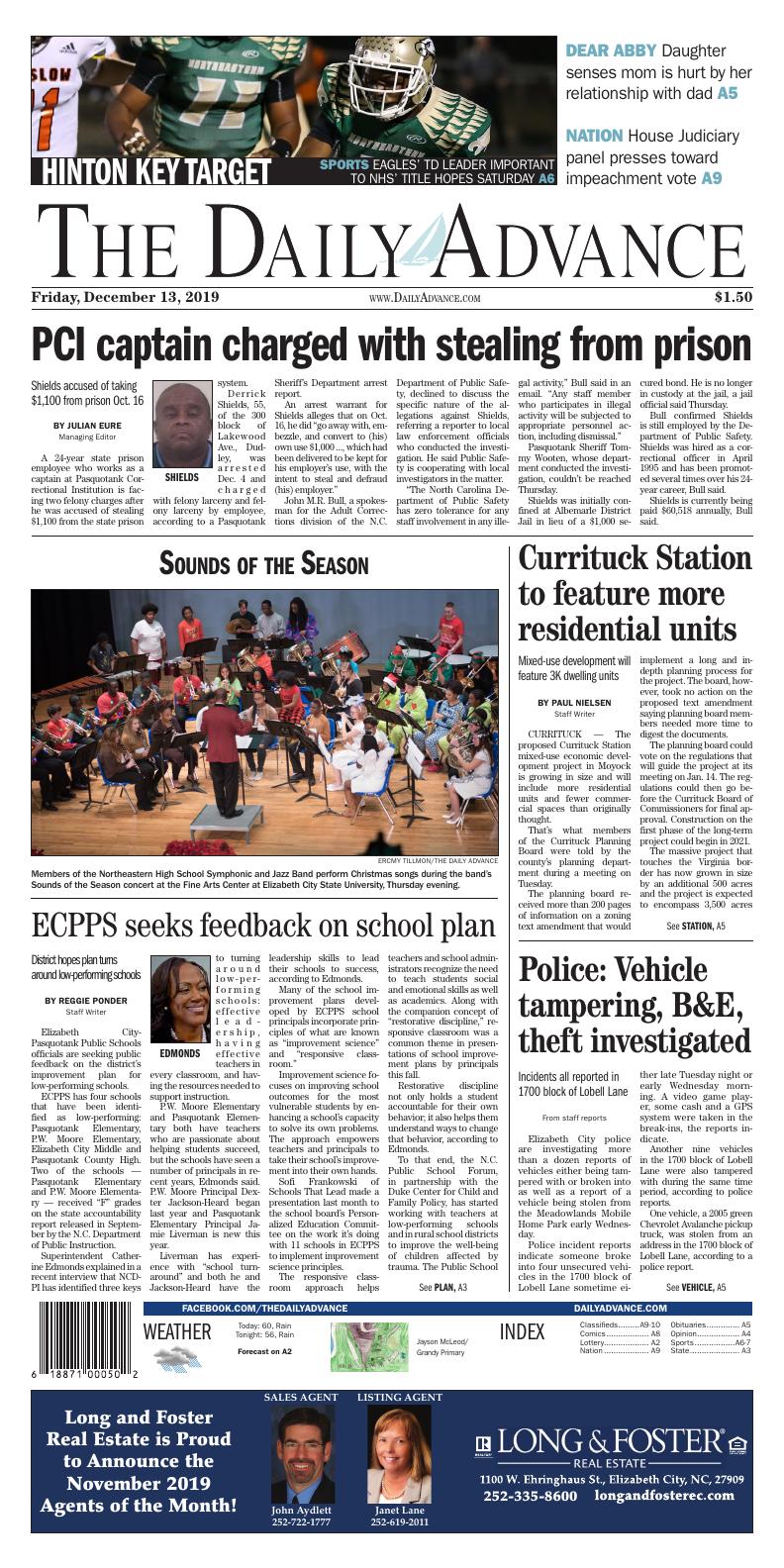 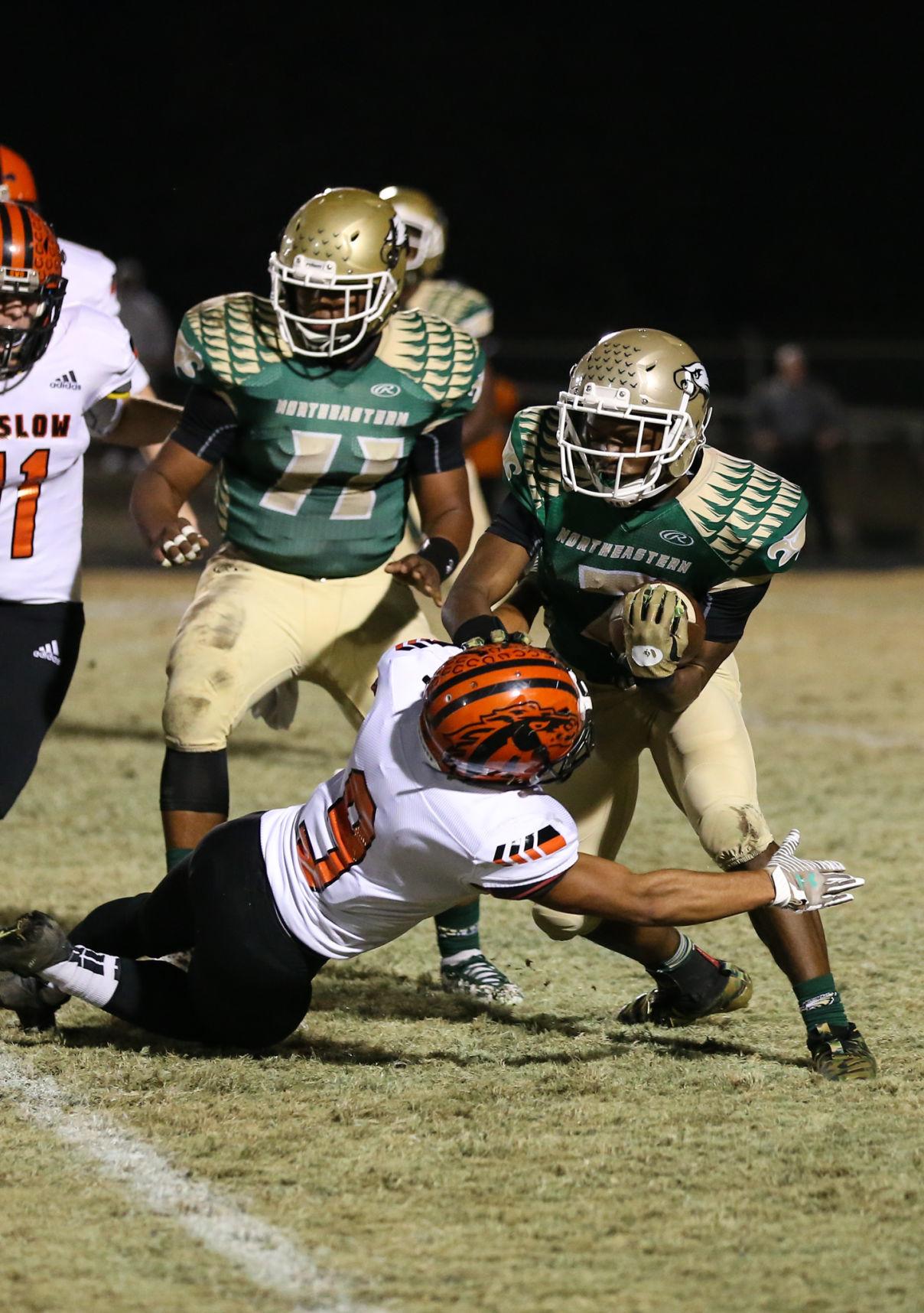 A 24-year state prison employee who works as a captain at Pasquotank Correctional Institution is facing two felony charges after he was accused of stealing $1,100 from the state prison system.

Derrick Shields, 55, of the 300 block of Lakewood Ave., Dudley, was arrested Dec. 4 and charged with felony larceny and felony larceny by employee, according to a Pasquotank Sheriff’s Department arrest report.

An arrest warrant for Shields alleges that on Oct. 16, he did “go away with, embezzle, and convert to (his) own use $1,000 ..., which had been delivered to be kept for his employer’s use, with the intent to steal and defraud (his) employer.”

John M.R. Bull, a spokesman for the Adult Corrections division of the N.C. Department of Public Safety, declined to discuss the specific nature of the allegations against Shields, referring a reporter to local law enforcement officials who conducted the investigation. He said Public Safety is cooperating with local investigators in the matter.

“The North Carolina Department of Public Safety has zero tolerance for any staff involvement in any illegal activity,” Bull said in an email. “Any staff member who participates in illegal activity will be subjected to appropriate personnel action, including dismissal.”

Shields was initially confined at Albemarle District Jail in lieu of a $1,000 secured bond. He is no longer in custody at the jail, a jail official said Thursday.

Bull confirmed Shields is still employed by the Department of Public Safety. Shields was hired as a correctional officer in April 1995 and has been promoted several times over his 24-year career, Bull said. 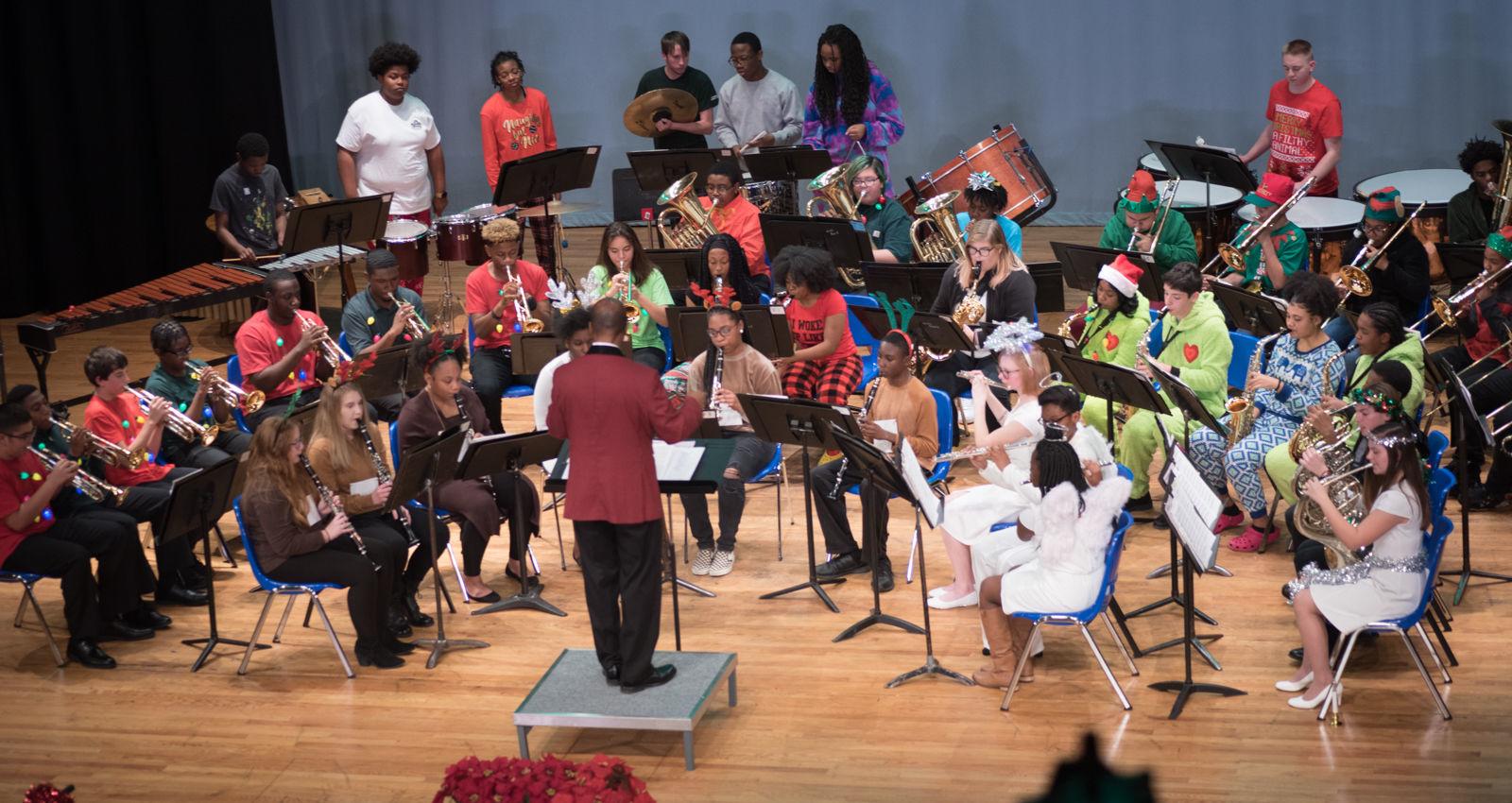 Members of the Northeastern High School Symphonic and Jazz Band perform Christmas songs during the band’s Sounds of the Season concert at the Fine Arts Center at Elizabeth City State University, Thursday evening.

Superintendent Catherine Edmonds explained in a recent interview that NCDPI has identified three keys to turning around low-performing schools: effective leadership, having effective teachers in every classroom, and having the resources needed to support instruction.

Liverman has experience with “school turnaround” and both he and Jackson-Heard have the leadership skills to lead their schools to success, according to Edmonds.

Many of the school improvement plans developed by ECPPS school principals incorporate principles of what are known as “improvement science” and “responsive classroom.”

Improvement science focuses on improving school outcomes for the most vulnerable students by enhancing a school’s capacity to solve its own problems. The approach empowers teachers and principals to take their school’s improvement into their own hands.

Sofi Frankowski of Schools That Lead made a presentation last month to the school board’s Personalized Education Committee on the work it’s doing with 11 schools in ECPPS to implement improvement science principles.

The responsive classroom approach helps teachers and school administrators recognize the need to teach students social and emotional skills as well as academics. Along with the companion concept of “restorative discipline,” responsive classroom was a common theme in presentations of school improvement plans by principals this fall.

Restorative discipline not only holds a student accountable for their own behavior; it also helps them understand ways to change that behavior, according to Edmonds.

To that end, the N.C. Public School Forum, in partnership with the Duke Center for Child and Family Policy, has started working with teachers at low-performing schools and in rural school districts to improve the well-being of children affected by trauma. The Public School Forum is working with P.W. Moore Elementary and River Road Middle School, and soon will also be assisting Elizabeth City Middle and Pasquotank Elementary schools as well. Eventually the effort will provide some training in basic strategies for teachers at all schools in ECPPS.

Edmonds said much of the district’s plan for improving low-performing schools is based on the individual schools’ improvement plans developed and presented by principals. The plan also includes some elements that are new, including an emphasis on principals meeting together for professional development and organization of a safety and security council.

Edmonds said school officials are eager to get public input on the proposed improvement plan, which is available on ECPPS’ website, www.ecpps.k12.nc.us. On the site is a link to an online survey form.

District officials expect to bring the improvement plan back before the ECPPS Board of Education on Monday. Once the board approves the plan it will go to state education officials who will either approve it or send it back to the school district with feedback.

CURRITUCK — The proposed Currituck Station mixed-use economic development project in Moyock is growing in size and will include more residential units and fewer commercial spaces than originally thought.

That’s what members of the Currituck Planning Board were told by the county’s planning department during a meeting on Tuesday.

The planning board received more than 200 pages of information on a zoning text amendment that would implement a long and in-depth planning process for the project. The board, however, took no action on the proposed text amendment saying planning board members needed more time to digest the documents.

The planning board could vote on the regulations that will guide the project at its meeting on Jan. 14. The regulations could then go before the Currituck Board of Commissioners for final approval. Construction on the first phase of the long-term project could begin in 2021.

The massive project that touches the Virginia border has now grown in size by an additional 500 acres and the project is expected to encompass 3,500 acres of what is now mostly undeveloped land. Assistant Planning Director Donna Voliva also told the planning board that a market feasibility study recommends more residential units than previously thought.

The project, which will also see commercial and industrial development, will border the west side of N.C. Highway 168 from the state line down to South Mills Road in Moyock. The far western reach of the project is along undeveloped lands on part of Northwest Backwoods Road, which runs from South Mills Road north to the Virginia border.

The planning process for the project, which was originally named the Moyock Mega Site, started in 2012 with the Moyock Small Area plan, which was eventually adopted by the county in 2014. That plan identified an employment activity center that is now Currituck Station. The county later conducted a market feasibility study for the area and a master plan was finished in 2017.

“This text amendment is the final step in the planning process to implement the long-range efforts that our elected officials began in 2012,” Voliva said. “Officials recognized that the Moyock area was experiencing a tremendous amount of growth and so they engaged staff to begin that process.’’

“We really anticipated more commercial growth for that particular area but what came out of that market feasibility study, yes, there are some commercial demands, but the demand is really residential,” Voliva said.

There are eight sub-districts within the project. The Center Station sub-district, which is along N.C. Highway 168 near Baxter Lane, is intended to be the center of the project and is designed to provide a mix of uses in a downtown-oriented setting. Those uses include retail, convenience, entertainment, civic and public uses with supporting attached and upper-story residential dwelling units. Center Station will have 15-foot wide sidewalks.

“We want people to walk more,” Voliva said. “The center (of the project) is where your concentrated development density will occur, that’s the Center Station. Out from that would come multi-family (uses) all the way down to single-family.”

The other five sub-districts call for a mix of residential uses along with limited neighborhood commercial uses. Residential density could be as low as 1.5 units an acre in some sub-districts and up to 12 units per acre in some cases. A wastewater treatment facility will be located on the site.

Some businesses under the proposed regulations that will not be allowed in Currituck Station include gas stations, adult entertainment, outdoor storage, tattoo and vehicle sales and service businesses.

“There may others that may be added to this,” Voliva said. “But these are the ones recommended by the consultant.”

Elizabeth City police are investigating more than a dozen reports of vehicles either being tampered with or broken into as well as a report of a vehicle being stolen from the Meadowlands Mobile Home Park early Wednesday.

Police incident reports indicate someone broke into four unsecured vehicles in the 1700 block of Lobell Lane sometime either late Tuesday night or early Wednesday morning. A video game player, some cash and a GPS system were taken in the break-ins, the reports indicate.

Another nine vehicles in the 1700 block of Lobell Lane were also tampered with during the same time period, according to police reports.

One vehicle, a 2005 green Chevrolet Avalanche pickup truck, was stolen from an address in the 1700 block of Lobell Lane, according to a police report.

All of the incidents were reported to police between 3:45 a.m. and 4:36 a.m. Wednesday, according to the reports.

Sgt. Latoya K. Flanigan of the Elizabeth City Police Department said each case of vehicle tampering, breaking-and-entering and theft is being investigated. She did not respond to a question about whether police believe the incidents are related.

No arrests have been made in any of the incidents, she said. 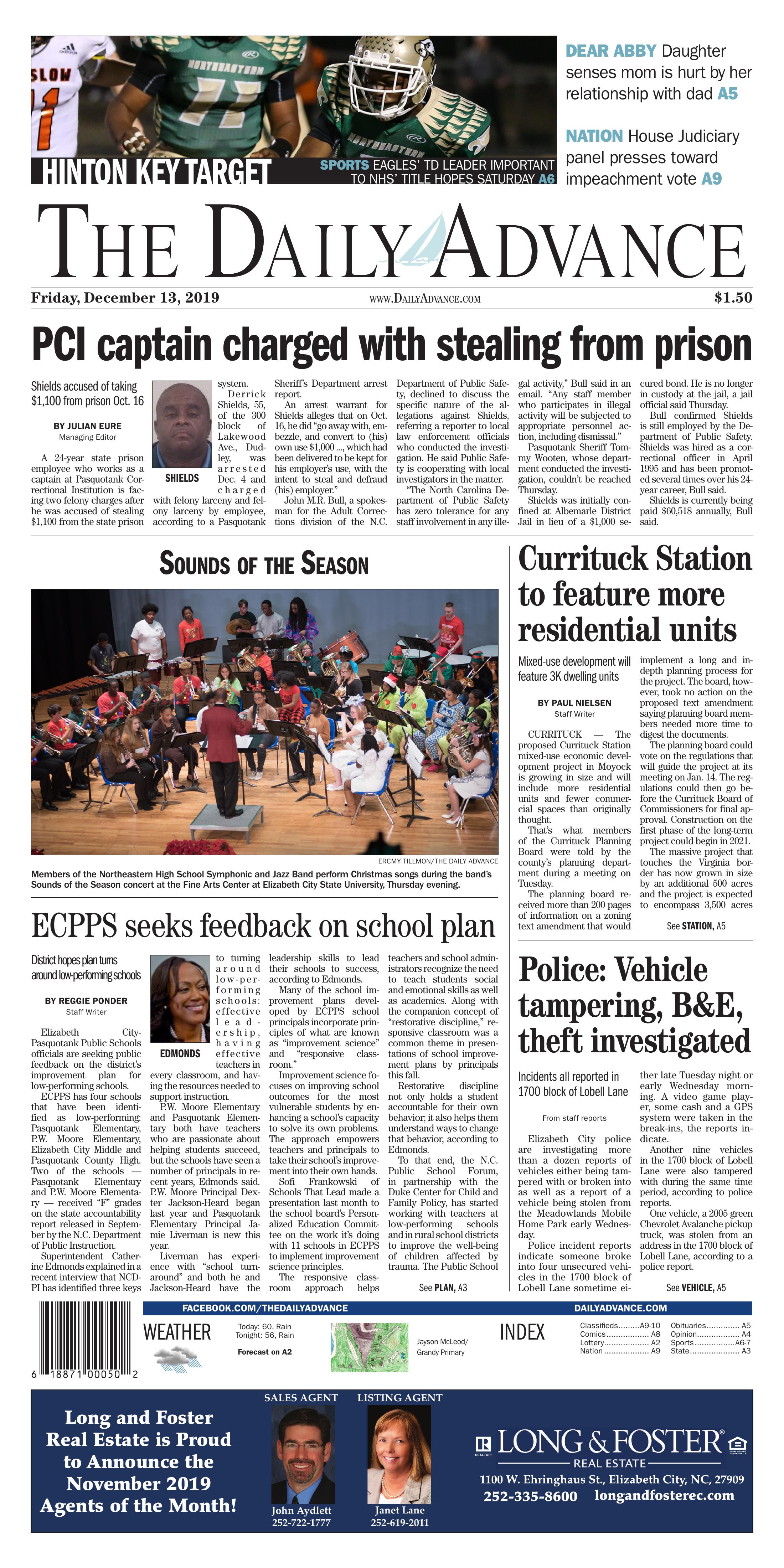