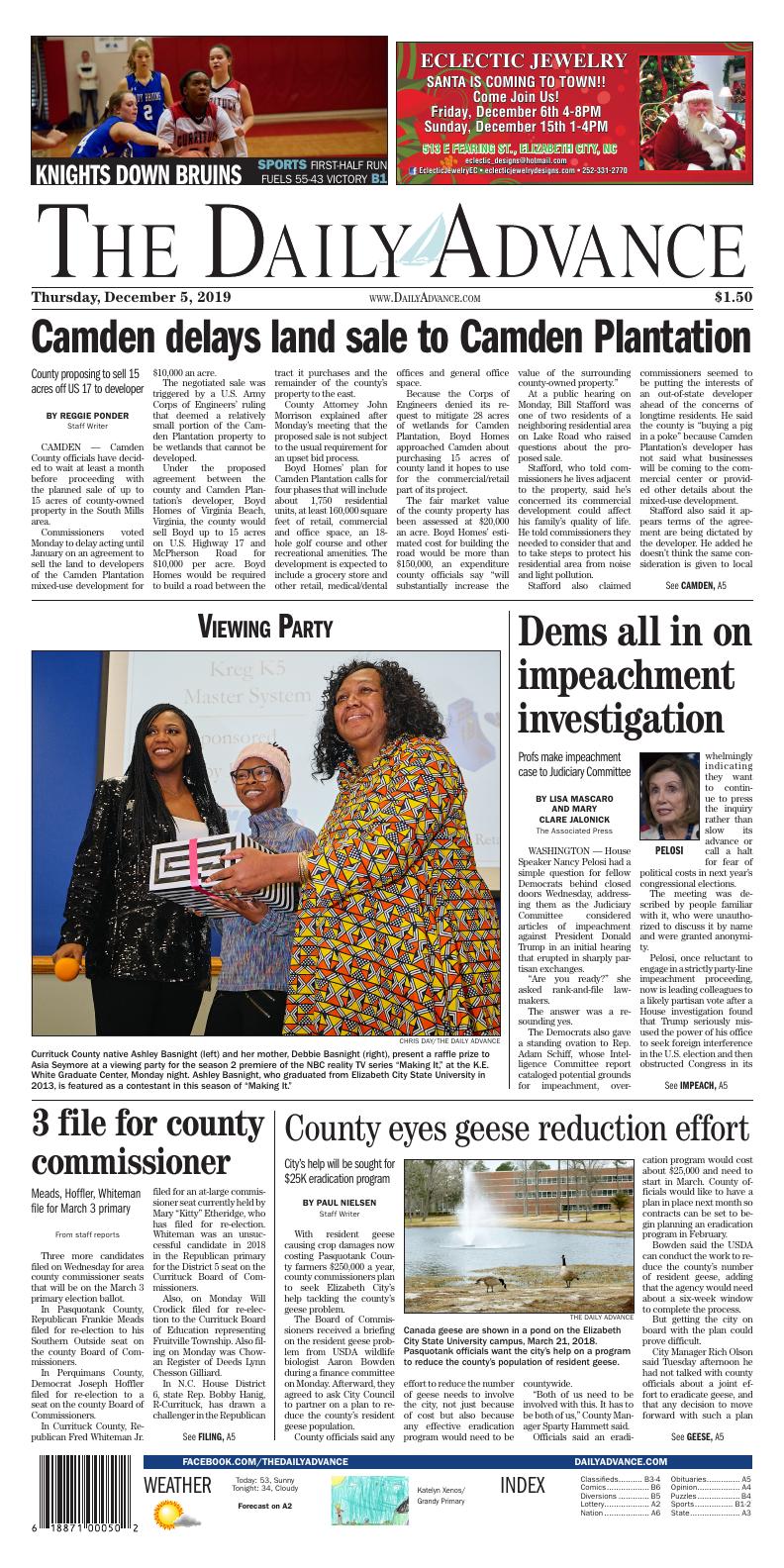 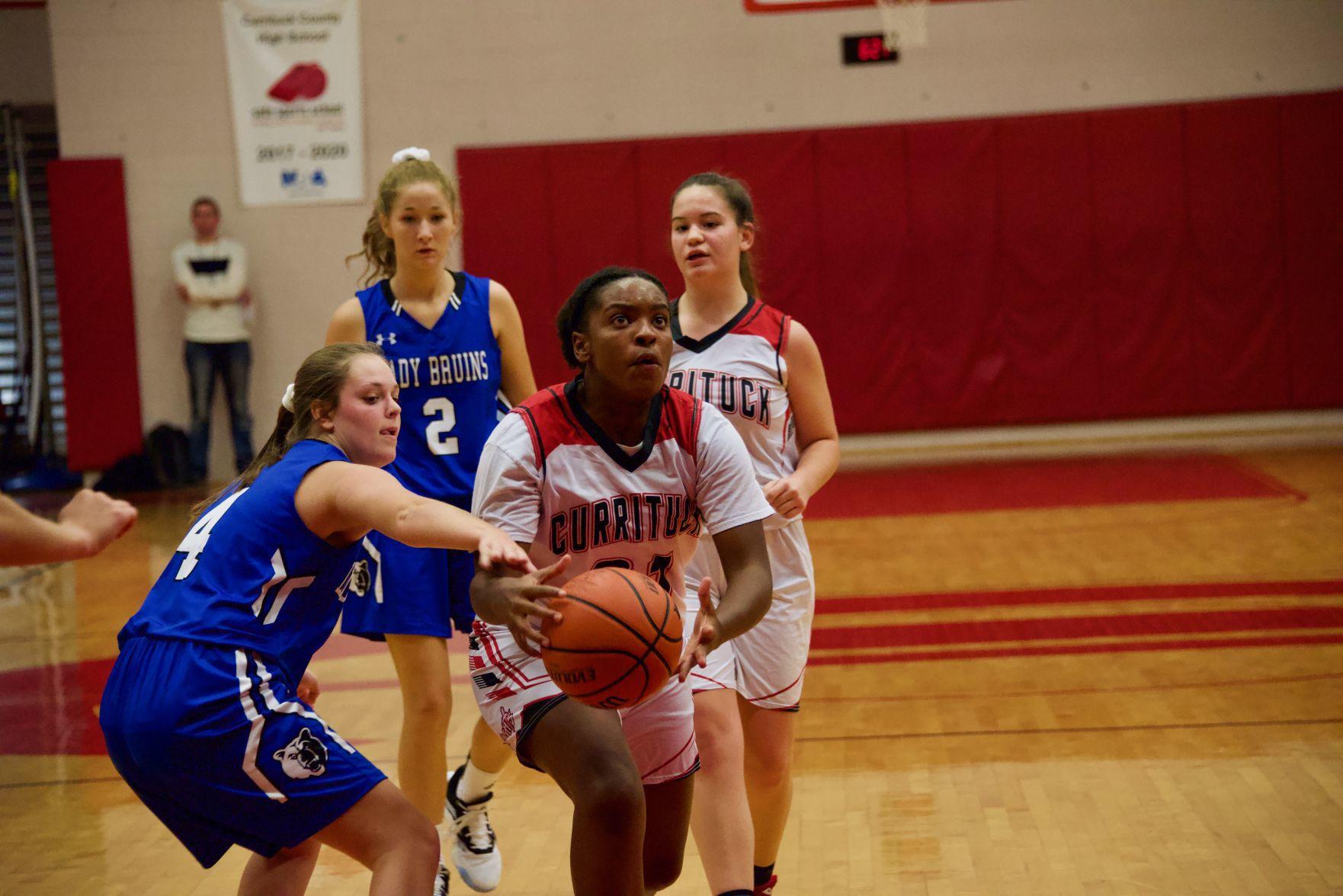 CAMDEN — Camden County officials have decided to wait at least a month before proceeding with the planned sale of up to 15 acres of county-owned property in the South Mills area.

Commissioners voted Monday to delay acting until January on an agreement to sell the land to developers of the Camden Plantation mixed-use development for $10,000 an acre.

The negotiated sale was triggered by a U.S. Army Corps of Engineers’ ruling that deemed a relatively small portion of the Camden Plantation property to be wetlands that cannot be developed.

Under the proposed agreement between the county and Camden Plantation’s developer, Boyd Homes of Virginia Beach, Virginia, the county would sell Boyd up to 15 acres on U.S. Highway 17 and McPherson Road for $10,000 per acre. Boyd Homes would be required to build a road between the tract it purchases and the remainder of the county’s property to the east.

County Attorney John Morrison explained after Monday’s meeting that the proposed sale is not subject to the usual requirement for an upset bid process.

Boyd Homes’ plan for Camden Plantation calls for four phases that will include about 1,750 residential units, at least 160,000 square feet of retail, commercial and office space, an 18-hole golf course and other recreational amenities. The development is expected to include a grocery store and other retail, medical/dental offices and general office space.

Because the Corps of Engineers denied its request to mitigate 28 acres of wetlands for Camden Plantation, Boyd Homes approached Camden about purchasing 15 acres of county land it hopes to use for the commercial/retail part of its project.

The fair market value of the county property has been assessed at $20,000 an acre. Boyd Homes’ estimated cost for building the road would be more than $150,000, an expenditure county officials say “will substantially increase the value of the surrounding county-owned property.”

At a public hearing on Monday, Bill Stafford was one of two residents of a neighboring residential area on Lake Road who raised questions about the proposed sale.

Stafford, who told commissioners he lives adjacent to the property, said he’s concerned its commercial development could affect his family’s quality of life. He told commissioners they needed to consider that and to take steps to protect his residential area from noise and light pollution.

Stafford also claimed commissioners seemed to be putting the interests of an out-of-state developer ahead of the concerns of longtime residents. He said the county is “buying a pig in a poke” because Camden Plantation’s developer has not said what businesses will be coming to the commercial center or provided other details about the mixed-use development.

Stafford also said it appears terms of the agreement are being dictated by the developer. He added he doesn’t think the same consideration is given to local developers.

He also questioned selling the land for $10,000 an acre, saying it seemed low even with the requirement to build the road.

“I hope you’re not trying to breathe life into a stalled or failing project,” Stafford said.

Ken Merner of Boyd Homes said the project was delayed for a while because of the 2008 recession and more recently by time-consuming permitting and review processes.

“It was never a dying project,” Merner said. “It was just a delayed project. There’s a lot of life left in it.”

Merner said he expects the Corps of Engineers will wrap up its work on Camden Plantation within 60-90 days. Construction of the first residential “pod” of 109 homes and the golf course could begin in the spring, he said.

Because a public hearing was held Monday, commissioners could have voted on the sale then. Asked afterward why he made the motion to delay consideration of the sale until January, Commissioner Ross Munro said he wanted to give commissioners time to be sure any questions about the sale are answered.

Commissioners Garry Meiggs and Clayton Riggs both declined to comment when asked about the proposed sale. 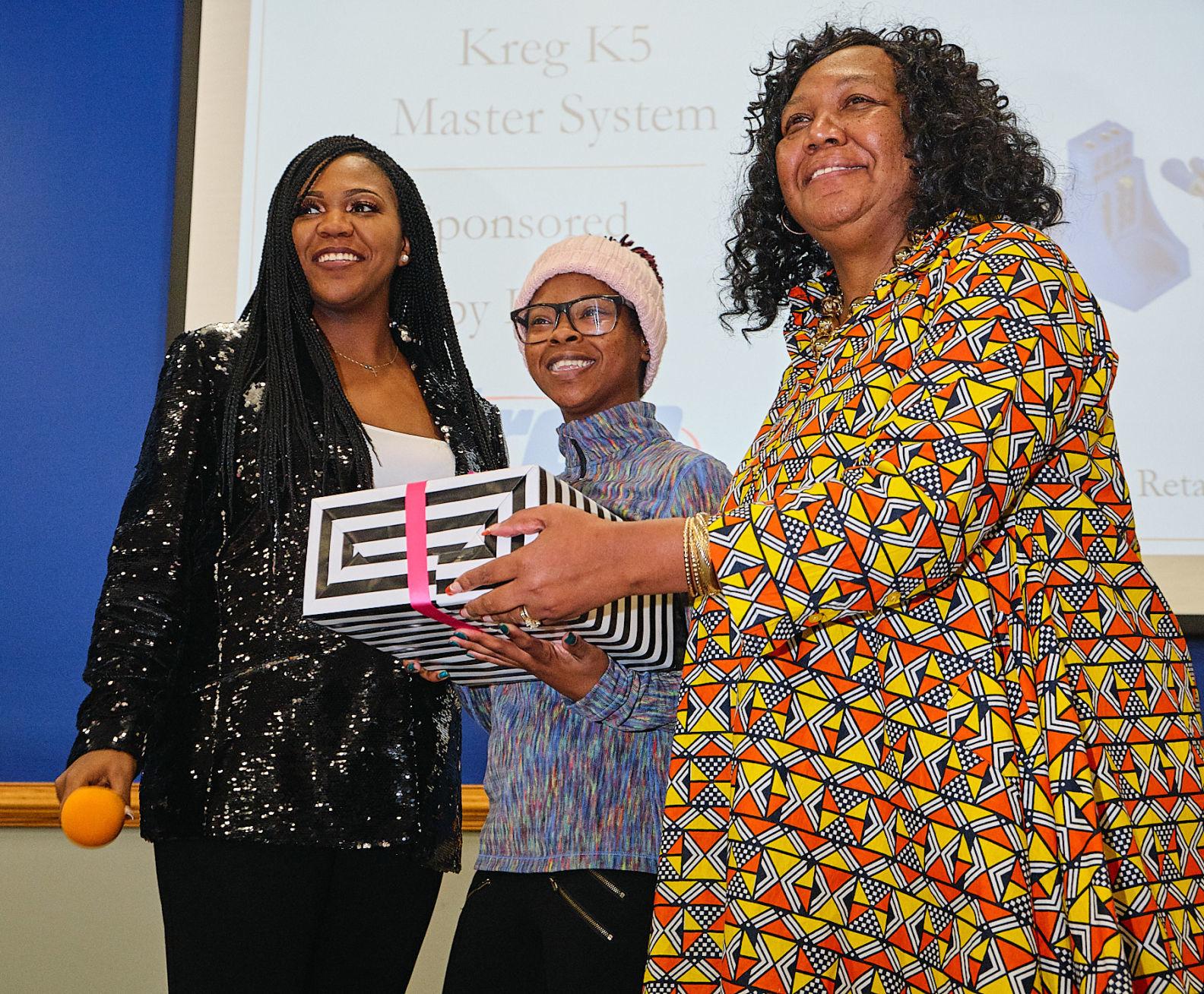 Currituck County native Ashley Basnight (left) and her mother, Debbie Basnight (right), present a raffle prize to Asia Seymore at a viewing party for the season 2 premiere of the NBC reality TV series “Making It,” at the K.E. White Graduate Center, Monday night. Ashley Basnight, who graduated from Elizabeth City State University in 2013, is featured as a contestant in this season of “Making It.”

Canada geese are shown in a pond on the Elizabeth City State University campus, March 21, 2018. Pasquotank officials want the city’s help on a program to reduce the county’s population of resident geese.

The Board of Commissioners received a briefing on the resident geese problem from USDA wildlife biologist Aaron Bowden during a finance committee on Monday. Afterward, they agreed to ask City Council to partner on a plan to reduce the county’s resident geese population.

County officials said any effort to reduce the number of geese needs to involve the city, not just because of cost but also because any effective eradication program would need to be countywide.

“Both of us need to be involved with this. It has to be both of us,” County Manager Sparty Hammett said.

Bowden said the USDA can conduct the work to reduce the county’s number of resident geese, adding that the agency would need about a six-week window to complete the process.

But getting the city on board with the plan could prove difficult.

City Manager Rich Olson said Tuesday afternoon he had not talked with county officials about a joint effort to eradicate geese, and that any decision to move forward with such a plan would have to be made by City Council. Olson also said city staff may have “some reservations” about a joint effort because of the cost.

“We have a lot of expenses coming up right now,” Olson said. “We would have to look at it.”

The USDA made a similar presentation about resident geese to county officials two years ago. Bowden noted there are even more resident geese in the county now and the problem they’re creating is now countywide.

He showed commissioners several photos of crop damage in the county.

“(Farm) producers are losing around $250,000 a year in damages, and that is just to crops,” Bowden said. “You have a perfect habitat, retention basins, creeks adjacent to crop fields and grassy areas. The soybeans look like little sticks and as you can see the tops are completely gone off of them.’’

One of the most effective geese-eradication measures, Bowden said, is to identify the animals’ nesting areas and then “oil” the eggs. That deprives egg embryos of oxygen, thus killing them, he said.

Coating their eggs in corn oil not only reduces geese’s ability to reproduce, it most likely would force them to leave the area in search of new nesting grounds.

“You would see the biggest turnaround in the first, second and third year,” he said. “Over the course of time you cut out 70 percent, give or take, of the population every year. If we can get really aggressive, and especially if we can get on private properties with retention basins, you are suddenly going to realize that when crossing Halstead (Boulevard Extended) instead of seeing 100 geese with 70 goslings you will see a dozen, two dozen adults.’’

Bowden also recommended that any plan include ordinances that prohibit citizens from feeding resident geese and requiring future retention basins be less geese friendly, which would include requiring steeper banks.

“There are some things you can do long term to eliminate the need for future oiling,” Bowden said. “Every time you put in a new development and a stormwater retention basin is put in you are creating more habitat. With a combination of tools, you can chip away at the population over time.”

But to work any effort has to be “comprehensive” and “all inclusive,” he said.

“It has to be pioneered by somebody with a vested interest and it takes a lot of work in a very narrow window of time,” Bowden said.

Dexter Harris, director of the Elizabeth City-Pasquotank County Parks and Recreation Department, said geese are a “huge problem’’ at some parks and public use areas around the county. Harris said he would like to see an ordinance that prohibits feeding resident geese.

“The golf course could be manageable but we have one guy that refuses to stop feeding them,” Harris said. “We have signage up that says ‘do not feed’ them, but we have a couple of people that completely ignore those signs.’’

Three more candidates filed on Wednesday for area county commissioner seats that will be on the March 3 primary election ballot.

In Pasquotank County, Republican Frankie Meads filed for re-election to his Southern Outside seat on the county Board of Commissioners.

In Perquimans County, Democrat Joseph Hoffler filed for re-election to a seat on the county Board of Commissioners.

In Currituck County, Republican Fred Whiteman Jr. filed for an at-large commissioner seat currently held by Mary “Kitty” Etheridge, who has filed for re-election. Whiteman was an unsuccessful candidate in 2018 in the Republican primary for the District 5 seat on the Currituck Board of Commissioners.

Also, on Monday Will Crodick filed for re-election to the Currituck Board of Education representing Fruitville Township. Also filing on Monday was Chowan Register of Deeds Lynn Chesson Gilliard.

Kill Devil Hills resident Rob Rollason said he filed for the seat because he believes the district needs a conservative voice in the General Assembly.

Rollason said he opposes efforts to expand Medicaid in the state and that he will be a strong defender of the Second Amendment. Rollason referenced proposed gun control measures proposed by new Democratic majorities in the Virginia legislature as something he doesn’t want to see in North Carolina.

“I feel that we are at a point where we need a strong conservative voice from this area and that is the only way we are going to be able to stop (Gov.) Roy Copper’s socialist agenda should he be re-elected governor,” Rollason said. “There is a wave against the Second Amendment in the United States right now. Just look at what Gov. (Ralph) Northam is talking about in Virginia now that his party (Democrats) has taken control. I don’t think something like that is good for this district.”

Rollason has lived in Dare County for most of his life and graduated from Manteo High School in 1989. After serving in the U.S. Army for four years, including serving in Operation Desert Storm, Rollason graduated from East Carolina University. Rollason worked in his family’s real estate business for a number of years and he is currently a contractor. 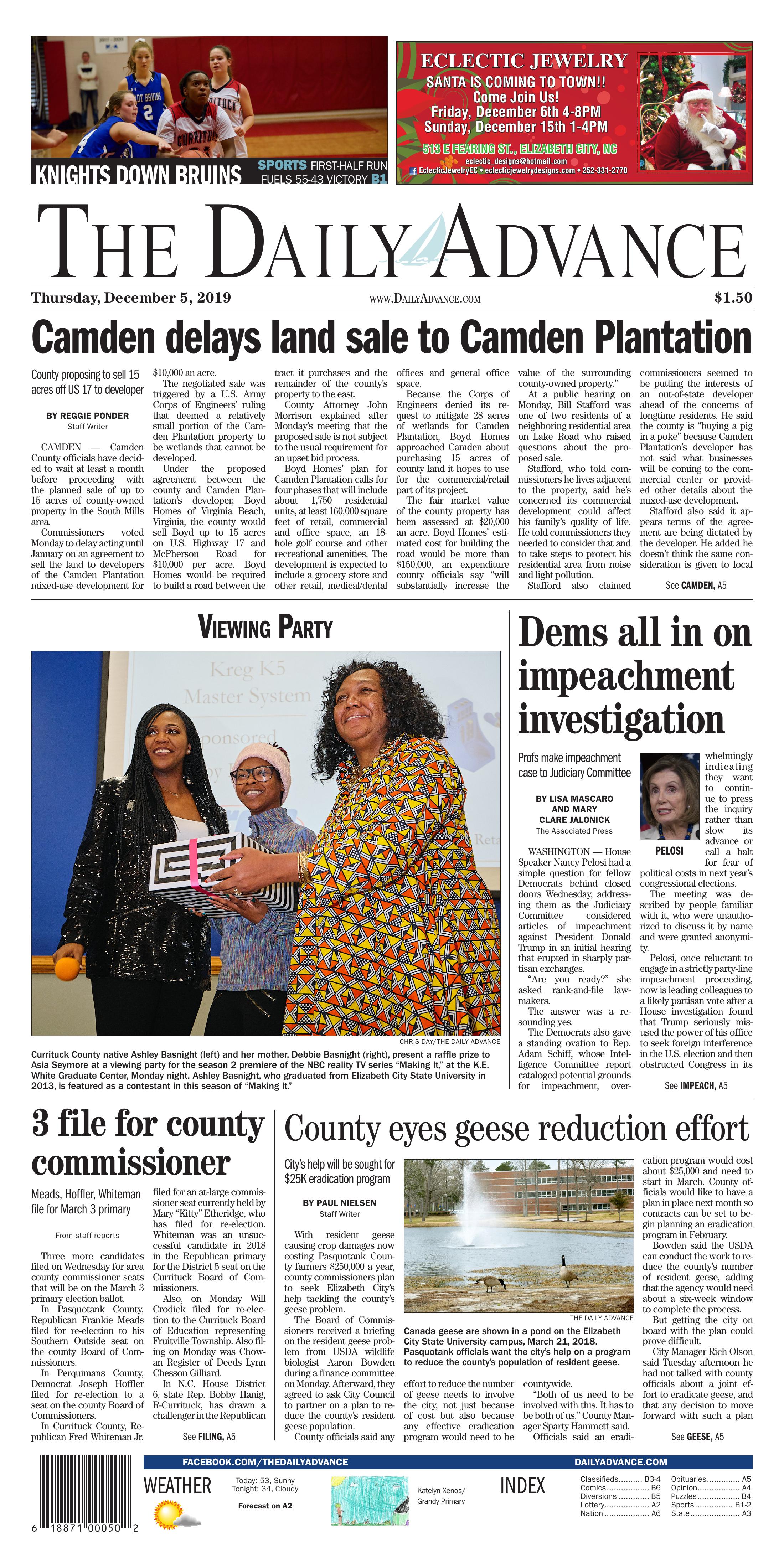