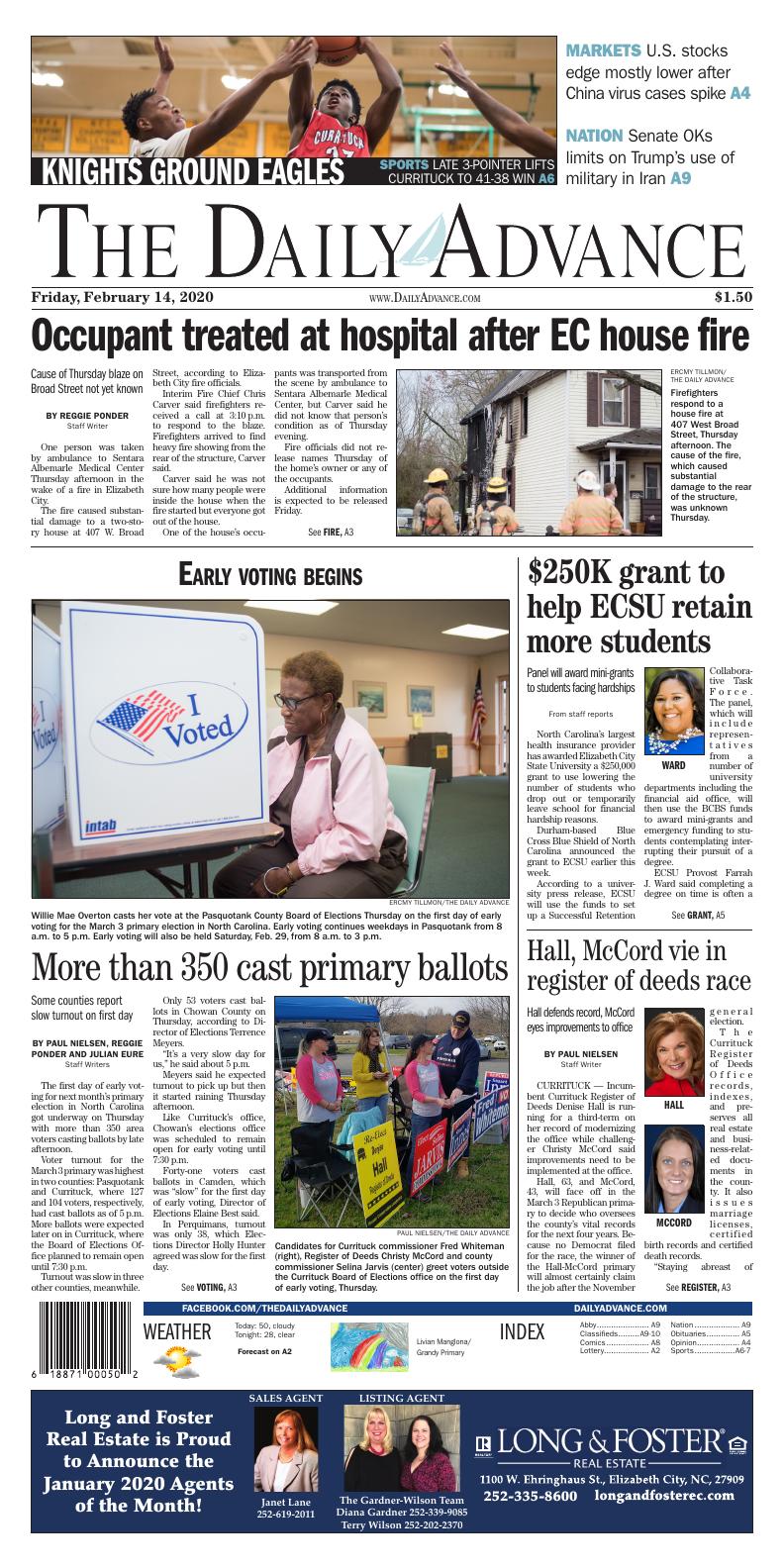 Firefighters respond to a house fire at 407 West Broad Street, Thursday afternoon. The cause of the fire, which caused substantial damage to the rear of the structure, was unknown Thursday.

One person was taken by ambulance to Sentara Albemarle Medical Center Thursday afternoon in the wake of a fire in Elizabeth City.

The fire caused substantial damage to a two-story house at 407 W. Broad Street, according to Elizabeth City fire officials.

Interim Fire Chief Chris Carver said firefighters received a call at 3:10 p.m. to respond to the blaze. Firefighters arrived to find heavy fire showing from the rear of the structure, Carver said.

Carver said he was not sure how many people were inside the house when the fire started but everyone got out of the house.

One of the house’s occupants was transported from the scene by ambulance to Sentara Albemarle Medical Center, but Carver said he did not know that person’s condition as of Thursday evening.

Fire officials did not release names Thursday of the home’s owner or any of the occupants.

Additional information is expected to be released Friday.

Assistant Fire Marshall Tim Chesson is investigating the fire and probably will have a report on the cause in a couple of days, Carver said.

The fire did spread to the second floor, Carver said.

A Coast Guard fire crew and personnel and equipment from the Pasquotank Providence Volunteer Fire Department assisted city firefighters at the scene.

The first day of early voting for next month’s primary election in North Carolina got underway on Thursday with more than 350 area voters casting ballots by late afternoon.

Voter turnout for the March 3 primary was highest in two counties: Pasquotank and Currituck, where 127 and 104 voters, respectively, had cast ballots as of 5 p.m. More ballots were expected later on in Currituck, where the Board of Elections Office planned to remain open until 7:30 p.m.

Turnout was slow in three other counties, meanwhile.

Only 53 voters cast ballots in Chowan County on Thursday, according to Director of Elections Terrence Meyers.

Meyers said he expected turnout to pick up but then it started raining Thursday afternoon.

Like Currituck’s office, Chowan’s elections office was scheduled to remain open for early voting until 7:30 p.m.

Forty-one voters cast ballots in Camden, which was “slow” for the first day of early voting, Director of Elections Elaine Best said.

In Perquimans, turnout was only 38, which Elections Director Holly Hunter agreed was slow for the first day.

Voters from both major parties are casting primary ballots in the March 3 election for president, U.S. Senate and most state Council of State offices. There are also contested state House races in the 5th and 6th districts.

All area counties also have at least one contested local race on the ballot. Currituck, however, has four: three contested races for county commissioner and a contested race for register of deeds.

“We had a couple of people at the door at 7:55 a.m.,” Currituck Board of Elections Director Syndi Banks said, referring to the high interest.

In Pasquotank County, Emma Tate was supervising her first election as interim elections director. Tate was named interim director by the Pasquotank Board of Elections following the resignation of former director Kelli Price. Price’s last day with the elections office was Feb. 7.

Tate said Price’s departure a week before the start of early voting had not affected the office’s operations on Thursday.

“Everything is running like it should. We’re fully staffed,” said Tate, who joined the elections office last July as deputy director.

A couple of voters in Pasquotank shared their thoughts about candidates on the primary ballot.

Larry Brown, 68, a Democrat who lives in Providence Township, said he voted for Keith Rivers in the 5th District state House race and for Joe Biden for president.

Brown said he is concerned about the need for improved water and sewer infrastructure in rural areas of Pasquotank.

He said he voted for Rivers because he thinks the challenger to state House Rep. Howard Hunter, D-Hertford, will support improvements that are needed in Pasquotank and the two other counties, Hertford and Gates, in the 5th District.

Health care and the protection of Medicare and Medicaid are important issues “now that I am a senior citizen,” Brown said.

Brown said he voted for Biden because he values his experience as a former U.S. senator and vice president for President Barack Obama.

“He’s solid,” Brown said of Biden. “He’s been in the government. He knows what to do. He has been through wars, he has passed laws, and he has talked to foreign governments.”

One of those casting a ballot in the Republican primary in Pasquotank Thursday was Gary White, 62, a former county commissioner who lives in the Weeksville area. White served on the board of commissioners as a Democrat but changed his registration to Republican in November 2019.

White said he voted for Mark Robinson for lieutenant governor because he is conservative and visited the area ahead of the primary.

He voted for Dan Forest for governor.

“I think it’s absolutely critical that the people of North Carolina remove Roy Cooper from public office and I think (Forest) is the one to do it,” White said.

Currituck Board of Elections Chairman B. Gary McGee said Sunday voting was proposed as a way to give voters another chance to cast their ballot.

“It was to increase the hours people are allowed to vote since a lot of people work on Saturday,” McGee said. “Sunday is a day most people don’t work.”

North Carolina’s largest health insurance provider has awarded Elizabeth City State University a $250,000 grant to use lowering the number of students who drop out or temporarily leave school for financial hardship reasons.

According to a university press release, ECSU will use the funds to set up a Successful Retention Collaborative Task Force. The panel, which will include representatives from a number of university departments including the financial aid office, will then use the BCBS funds to award mini-grants and emergency funding to students contemplating interrupting their pursuit of a degree.

ECSU Provost Farrah J. Ward said completing a degree on time is often a significant challenge for students from low-income families and rural areas, primarily because of their financial circumstances. She said the BCBS grant is designed to help those students stay in school and complete their degree.

To receive funding from the grant, students must demonstrate they are academically capable of maintaining their grade-point average and are on a path to graduation, ECSU said.

Ward said the SRC Task Force will use a “multi-dimensional strategy” over a three-year period to address the needs of students benefiting from the grant and assessing their success.

The freshman retention rate dropped to 67.8 percent for freshmen who enrolled in fall 2015 and then increased to 73.9 percent for the cohort that started at ECSU in fall 2016. Since then the rate has declined to 70.9 percent, but Ward pointed out the fall 2018 freshman class was much larger — 416 new freshmen compared with 268 in fall 2015.

CURRITUCK — Incumbent Currituck Register of Deeds Denise Hall is running for a third-term on her record of modernizing the office while challenger Christy McCord said improvements need to be implemented at the office.

Hall, 63, and McCord, 43, will face off in the March 3 Republican primary to decide who oversees the county’s vital records for the next four years. Because no Democrat filed for the race, the winner of the Hall-McCord primary will almost certainly claim the job after the November general election.

“Staying abreast of technology and all of the uses of technology to create a larger efficiency has been and will continue to be a goal for me,” Hall said. “When I took office, it was antiquated. With the digitalization of records that I have done, we are no longer faced with expanding the office.’’

McCord, however, said improvements need to be made to the Register of Deeds office. Those improvements include creating a new mobile app that will allow users, especially real estate agents and attorneys, better access to the office’s website from mobile devices. McCord said that only the first page of the office’s website can be accessed from a mobile device. She said she will work with the county’s technology department to improve the page’s functionality.

“We need a mobile website, and that is one thing I will implement immediately if I am elected,” McCord said. “There is not a mobile app and a lot of our real estate agents try to use that (web)site from their phones. When you pull it up, you can only see page one of nine. You can try it out. That is like a kid giving you page one of a three-page report card.’’

Hall said all of the pages are available when using a mobile device and that she has given instructions to people on how to navigate the process.

“If she (McCord) wants to come in to the office, I would be happy to show her how it works on her cellphone,” Hall said.

Hall feels it is not practical for the Register of Deeds Office to take over processing passports because she said that, by law, the employee, or employees, who would process passports would not be able to also have access to the vital records in the office. Having access to vital records, which include birth, death and marriage certificates, is part of the day-to-day activities of the current staff, Hall said.

McCord said the Register of Deeds Office is capable of processing passport requests and it would be a service she would offer if elected.

“I would do it exactly like the Clerk of Court’s office did,” McCord said. “There is not that much involved with it. You don’t have to take employees off their current task. I think there is plenty of time in the office to do that. It is just helping citizens with the application process because it can be complicated for someone that is not familiar with it.” 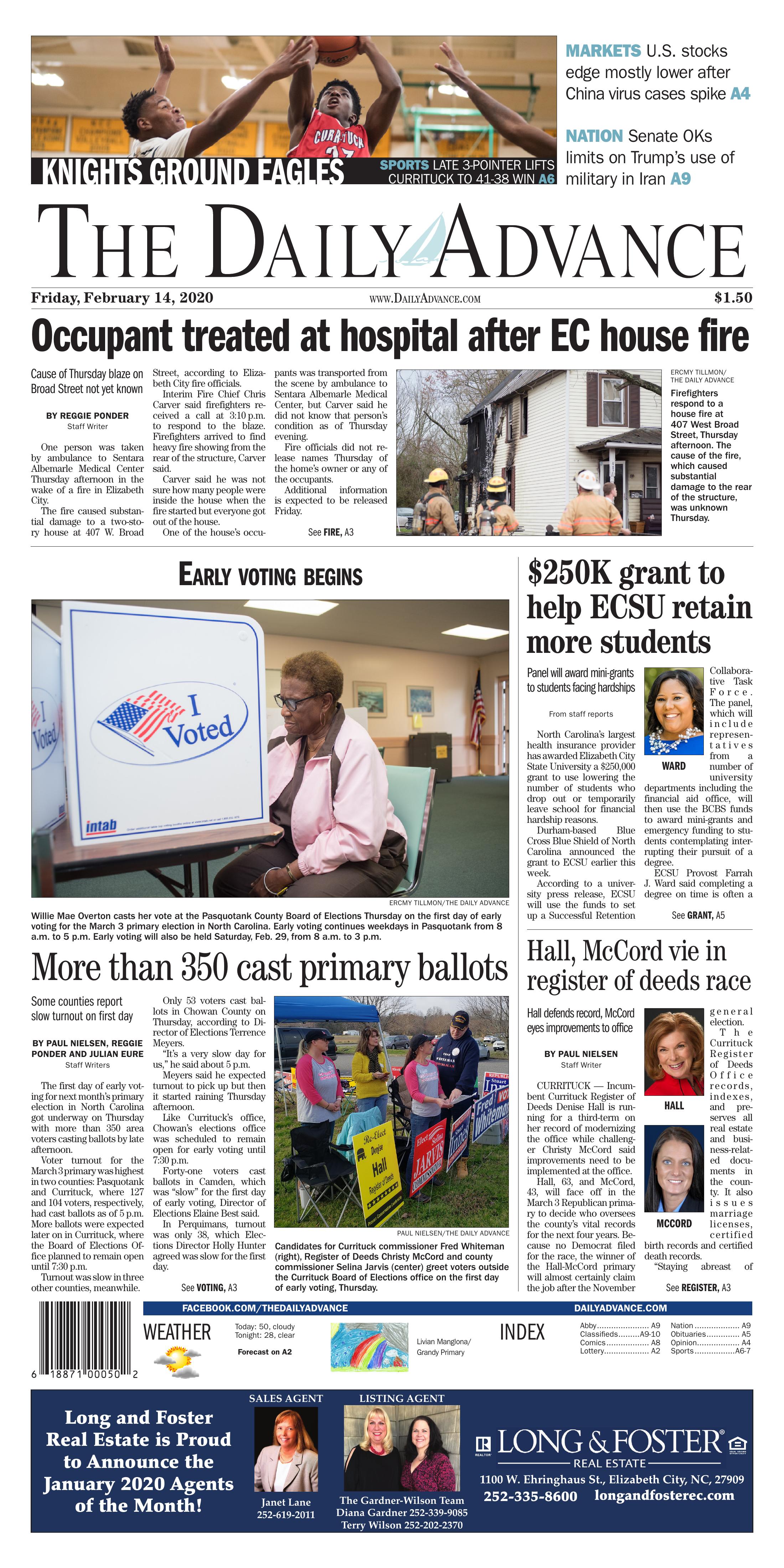