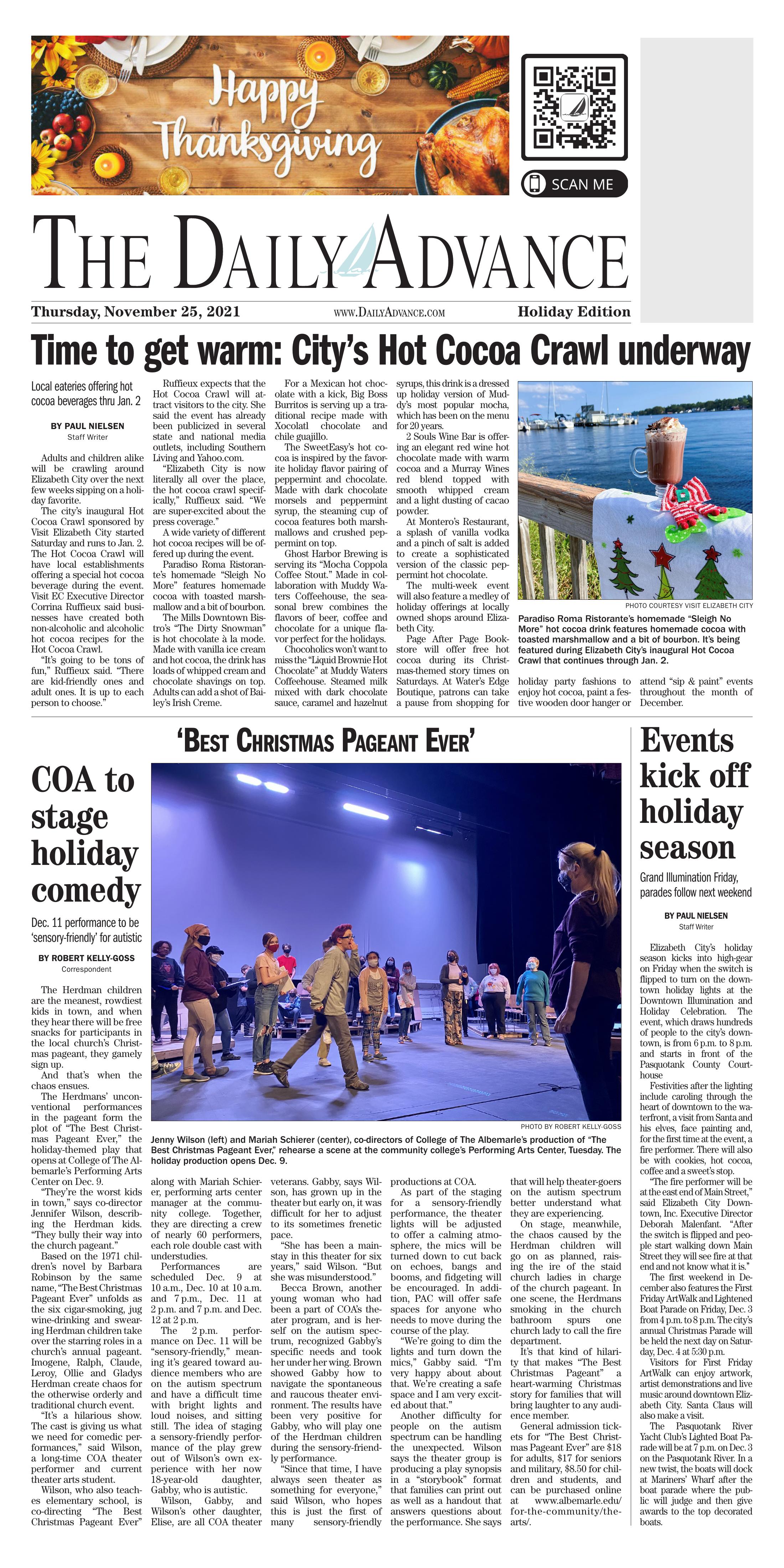 Adults and children alike will be crawling around Elizabeth City over the next few weeks sipping on a holiday favorite.

“It’s going to be tons of fun,” Ruffieux said. “There are kid-friendly ones and adult ones. It is up to each person to choose.”

Ruffieux expects that the Hot Cocoa Crawl will attract visitors to the city. She said the event has already been publicized in several state and national media outlets, including Southern Living and Yahoo.com.

“Elizabeth City is now literally all over the place, the hot cocoa crawl specifically,” Ruffieux said. “We are super-excited about the press coverage.’’

A wide variety of different hot cocoa recipes will be offered up during the event.

The Mills Downtown Bistro’s “The Dirty Snowman” is hot chocolate à la mode. Made with vanilla ice cream and hot cocoa, the drink has loads of whipped cream and chocolate shavings on top. Adults can add a shot of Bailey’s Irish Creme.

For a Mexican hot chocolate with a kick, Big Boss Burritos is serving up a traditional recipe made with Xocolatl chocolate and chile guajillo.

The SweetEasy’s hot cocoa is inspired by the favorite holiday flavor pairing of peppermint and chocolate. Made with dark chocolate morsels and peppermint syrup, the steaming cup of cocoa features both marshmallows and crushed peppermint on top.

Ghost Harbor Brewing is serving its “Mocha Coppola Coffee Stout.” Made in collaboration with Muddy Waters Coffeehouse, the seasonal brew combines the flavors of beer, coffee and chocolate for a unique flavor perfect for the holidays.

Chocoholics won’t want to miss the “Liquid Brownie Hot Chocolate” at Muddy Waters Coffeehouse. Steamed milk mixed with dark chocolate sauce, caramel and hazelnut syrups, this drink is a dressed up holiday version of Muddy’s most popular mocha, which has been on the menu for 20 years.

2 Souls Wine Bar is offering an elegant red wine hot chocolate made with warm cocoa and a Murray Wines red blend topped with smooth whipped cream and a light dusting of cacao powder.

At Montero’s Restaurant, a splash of vanilla vodka and a pinch of salt is added to create a sophisticated version of the classic peppermint hot chocolate.

The multi-week event will also feature a medley of holiday offerings at locally owned shops around Elizabeth City.

Page After Page Bookstore will offer free hot cocoa during its Christmas-themed story times on Saturdays. At Water’s Edge Boutique, patrons can take a pause from shopping for holiday party fashions to enjoy hot cocoa, paint a festive wooden door hanger or attend “sip & paint” events throughout the month of December.

Jenny Wilson (left) and Mariah Schierer (center), co-directors of College of The Albemarle’s production of “The Best Christmas Pageant Ever,” rehearse a scene at the community college’s Performing Arts Center, Tuesday. The holiday production opens Dec. 9.

The Herdman children are the meanest, rowdiest kids in town, and when they hear there will be free snacks for participants in the local church’s Christmas pageant, they gamely sign up.

And that’s when the chaos ensues.

The Herdmans’ unconventional performances in the pageant form the plot of “The Best Christmas Pageant Ever,” the holiday-themed play that opens at College of The Albemarle’s Performing Arts Center on Dec. 9.

“They’re the worst kids in town,” says co-director Jennifer Wilson, describing the Herdman kids. “They bully their way into the church pageant.”

Based on the 1971 children’s novel by Barbara Robinson by the same name, “The Best Christmas Pageant Ever” unfolds as the six cigar-smoking, jug wine-drinking and swearing Herdman children take over the starring roles in a church’s annual pageant. Imogene, Ralph, Claude, Leroy, Ollie and Gladys Herdman create chaos for the otherwise orderly and traditional church event.

“It’s a hilarious show. The cast is giving us what we need for comedic performances,” said Wilson, a long-time COA theater performer and current theater arts student.

Wilson, who also teaches elementary school, is co-directing “The Best Christmas Pageant Ever” along with Mariah Schierer, performing arts center manager at the community college. Together, they are directing a crew of nearly 60 performers, each role double cast with understudies.

The 2 p.m. performance on Dec. 11 will be “sensory-friendly,” meaning it’s geared toward audience members who are on the autism spectrum and have a difficult time with bright lights and loud noises, and sitting still. The idea of staging a sensory-friendly performance of the play grew out of Wilson’s own experience with her now 18-year-old daughter, Gabby, who is autistic.

Wilson, Gabby, and Wilson’s other daughter, Elise, are all COA theater veterans. Gabby, says Wilson, has grown up in the theater but early on, it was difficult for her to adjust to its sometimes frenetic pace.

“She has been a mainstay in this theater for six years,” said Wilson. “But she was misunderstood.”

Becca Brown, another young woman who had been a part of COA’s theater program, and is herself on the autism spectrum, recognized Gabby’s specific needs and took her under her wing. Brown showed Gabby how to navigate the spontaneous and raucous theater environment. The results have been very positive for Gabby, who will play one of the Herdman children during the sensory-friendly performance.

“Since that time, I have always seen theater as something for everyone,” said Wilson, who hopes this is just the first of many sensory-friendly productions at COA.

As part of the staging for a sensory-friendly performance, the theater lights will be adjusted to offer a calming atmosphere, the mics will be turned down to cut back on echoes, bangs and booms, and fidgeting will be encouraged. In addition, PAC will offer safe spaces for anyone who needs to move during the course of the play.

“We’re going to dim the lights and turn down the mics,” Gabby said. “I’m very happy about about that. We’re creating a safe space and I am very excited about that.”

Another difficulty for people on the autism spectrum can be handling the unexpected. Wilson says the theater group is producing a play synopsis in a “storybook” format that families can print out as well as a handout that answers questions about the performance. She says that will help theater-goers on the autism spectrum better understand what they are experiencing.

On stage, meanwhile, the chaos caused by the Herdman children will go on as planned, raising the ire of the staid church ladies in charge of the church pageant. In one scene, the Herdmans smoking in the church bathroom spurs one church lady to call the fire department.

It’s that kind of hilarity that makes “The Best Christmas Pageant” a heart-warming Christmas story for families that will bring laughter to any audience member.

General admission tickets for “The Best Christmas Pageant Ever” are $18 for adults, $17 for seniors and military, $8.50 for children and students, and can be purchased online at www.albemarle.edu/for-the-community/the-arts/.

In this file photo from November 2019, the Albemarle Youth Choir, under direction of Kelly Balmaceda, performs Christmas carols during the Grand Illumination ceremony outside the Pasquotank County Courthouse. This year’s Grand Illumination and Holiday Celebration will be held on Friday.

Elizabeth City’s holiday season kicks into high-gear on Friday when the switch is flipped to turn on the downtown holiday lights at the Downtown Illumination and Holiday Celebration. The event, which draws hundreds of people to the city’s downtown, is from 6 p.m. to 8 p.m. and starts in front of the Pasquotank County Courthouse

Festivities after the lighting include caroling through the heart of downtown to the waterfront, a visit from Santa and his elves, face painting and, for the first time at the event, a fire performer. There will also be with cookies, hot cocoa, coffee and a sweet’s stop.

“The fire performer will be at the east end of Main Street,” said Elizabeth City Downtown, Inc. Executive Director Deborah Malenfant. “After the switch is flipped and people start walking down Main Street they will see fire at that end and not know what it is.’’

The first weekend in December also features the First Friday ArtWalk and Lightened Boat Parade on Friday, Dec. 3 from 4 p.m. to 8 p.m. The city’s annual Christmas Parade will be held the next day on Saturday, Dec. 4 at 5:30 p.m.

The Pasquotank River Yacht Club’s Lighted Boat Parade will be at 7 p.m. on Dec. 3 on the Pasquotank River. In a new twist, the boats will dock at Mariners’ Wharf after the boat parade where the public will judge and then give awards to the top decorated boats.