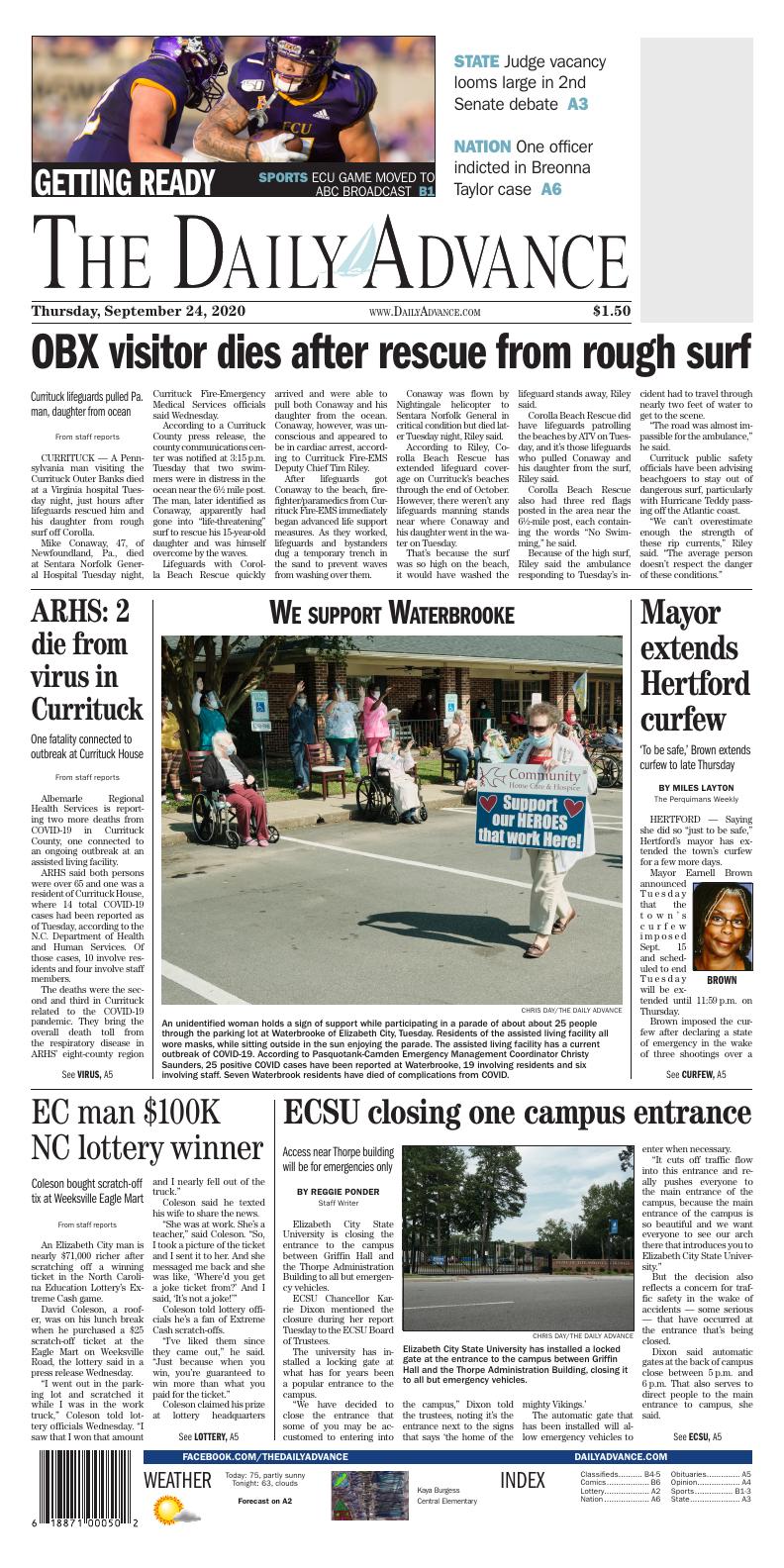 CURRITUCK — A Pennsylvania man visiting the Currituck Outer Banks died at a Virginia hospital Tuesday night, just hours after lifeguards rescued him and his daughter from rough surf off Corolla.

According to a Currituck County press release, the county communications center was notified at 3:15 p.m. Tuesday that two swimmers were in distress in the ocean near the 6½ mile post. The man, later identified as Conaway, apparently had gone into “life-threatening” surf to rescue his 15-year-old daughter and was himself overcome by the waves.

Lifeguards with Corolla Beach Rescue quickly arrived and were able to pull both Conaway and his daughter from the ocean. Conaway, however, was unconscious and appeared to be in cardiac arrest, according to Currituck Fire-EMS Deputy Chief Tim Riley.

After lifeguards got Conaway to the beach, firefighter/paramedics from Currituck Fire-EMS immediately began advanced life support measures. As they worked, lifeguards and bystanders dug a temporary trench in the sand to prevent waves from washing over them.

According to Riley, Corolla Beach Rescue has extended lifeguard coverage on Currituck’s beaches through the end of October. However, there weren’t any lifeguards manning stands near where Conaway and his daughter went in the water on Tuesday.

That’s because the surf was so high on the beach, it would have washed the lifeguard stands away, Riley said.

Corolla Beach Rescue did have lifeguards patrolling the beaches by ATV on Tuesday, and it’s those lifeguards who pulled Conaway and his daughter from the surf, Riley said.

Corolla Beach Rescue also had three red flags posted in the area near the 6½-mile post, each containing the words “No Swimming,” he said.

Because of the high surf, Riley said the ambulance responding to Tuesday’s incident had to travel through nearly two feet of water to get to the scene.

“The road was almost impassible for the ambulance,” he said.

Currituck public safety officials have been advising beachgoers to stay out of dangerous surf, particularly with Hurricane Teddy passing off the Atlantic coast.

“We can’t overestimate enough the strength of these rip currents,” Riley said. “The average person doesn’t respect the danger of these conditions.” 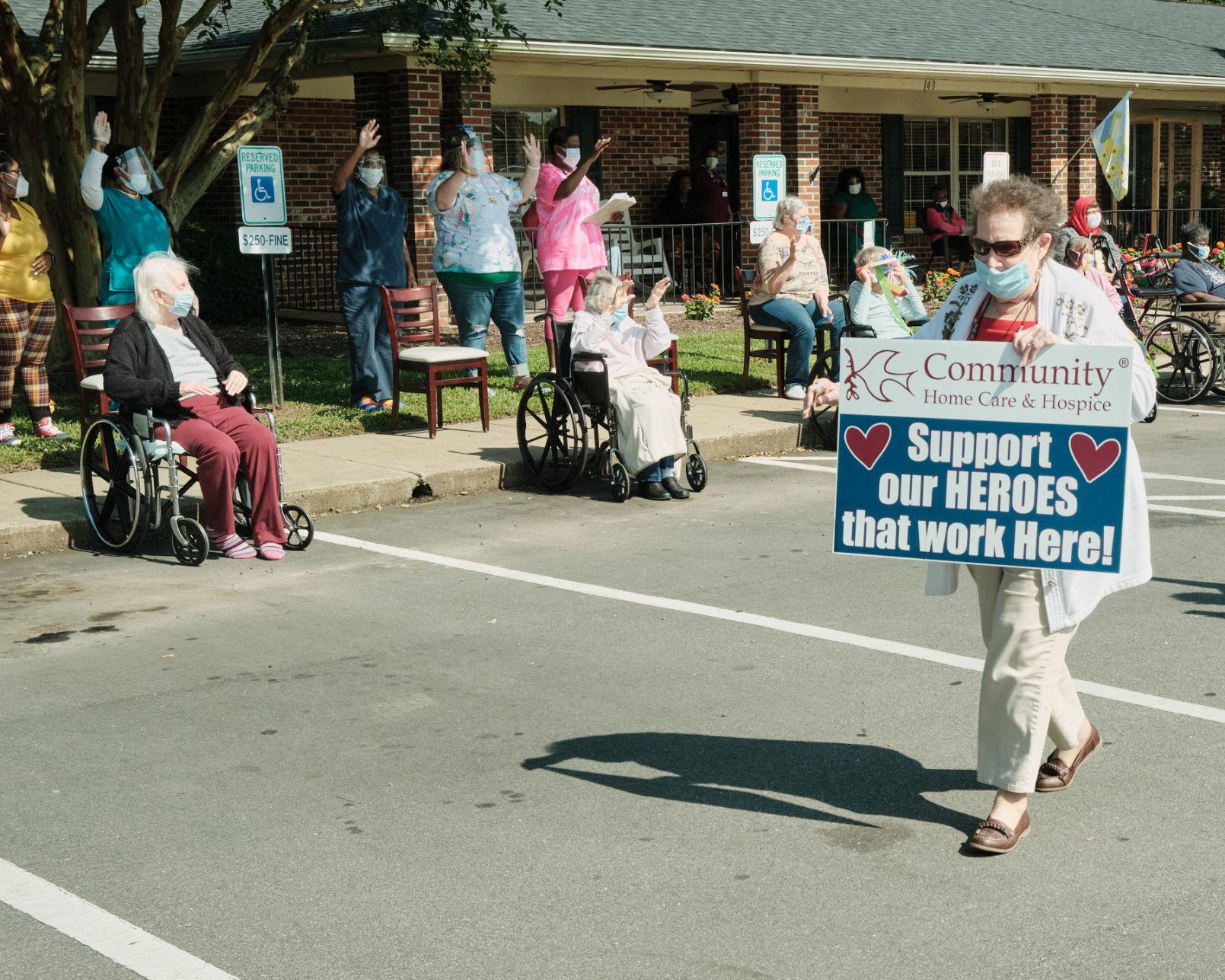 An unidentified woman holds a sign of support while participating in a parade of about about 25 people through the parking lot at Waterbrooke of Elizabeth City, Tuesday. Residents of the assisted living facility all wore masks, while sitting outside in the sun enjoying the parade. The assisted living facility has a current outbreak of COVID-19. According to Pasquotank-Camden Emergency Management Coordinator Christy Saunders, 25 positive COVID cases have been reported at Waterbrooke, 19 involving residents and six involving staff. Seven Waterbrook residents have died of complications from COVID.

Elizabeth City State University has installed a locked gate at the entrance to the campus between Griffin Hall and the Thorpe Administration Building, closing it to all but emergency vehicles.

Elizabeth City State University is closing the entrance to the campus between Griffin Hall and the Thorpe Administration Building to all but emergency vehicles.

ECSU Chancellor Karrie Dixon mentioned the closure during her report Tuesday to the ECSU Board of Trustees.

The university has installed a locking gate at what has for years been a popular entrance to the campus.

“We have decided to close the entrance that some of you may be accustomed to entering into the campus,” Dixon told the trustees, noting it’s the entrance next to the signs that says ‘the home of the mighty Vikings.’

The automatic gate that has been installed will allow emergency vehicles to enter when necessary.

But the decision also reflects a concern for traffic safety in the wake of accidents — some serious — that have occurred at the entrance that’s being closed.

Dixon said automatic gates at the back of campus close between 5 p.m. and 6 p.m. That also serves to direct people to the main entrance to campus, she said.

The back campus gates will strengthen campus safety by allowing campus police to monitor much more closely who is on the campus, Dixon said.

New signs have been erected around the campus to create a more welcoming environment, she said.

Demolition of Hugh Cale Hall and Doles Hall is nearly complete. Dixon pointed out that the area where those residence halls were located is the planned location of a new library.

Lane Hall also has received a facelift, which Dixon said reflects the way ECSU wants everyone who comes to the campus “to know that we value our campus, we want our campus to look nice, we want everyone to enjoy their time there.”

Dixon thanked the facilities staff and others working to ensure the campus looks the best that it can.

“We’ve received such significant feedback from the campus community as well as our community surrounding ECSU on how wonderful our campus looks,” Dixon said. “Everyone is committed to making sure that our campus is beautiful.”

An Elizabeth City man is nearly $71,000 richer after scratching off a winning ticket in the North Carolina Education Lottery’s Extreme Cash game.

David Coleson, a roofer, was on his lunch break when he purchased a $25 scratch-off ticket at the Eagle Mart on Weeksville Road, the lottery said in a press release Wednesday.

“I went out in the parking lot and scratched it while I was in the work truck,” Coleson told lottery officials Wednesday. “I saw that I won that amount and I nearly fell out of the truck.”

Coleson said he texted his wife to share the news.

“She was at work. She’s a teacher,” said Coleson. “So, I took a picture of the ticket and I sent it to her. And she messaged me back and she was like, ‘Where’d you get a joke ticket from?’ And I said, ‘It’s not a joke!’”

“I’ve liked them since they came out,” he said. “Just because when you win, you’re guaranteed to win more than what you paid for the ticket.”

Coleson claimed his prize at lottery headquarters in Raleigh. After required federal and state tax withholdings, he took home $70,757.

Coleson told lottery officials he and his wife plan to use their prize money to pay off bills. The couple recently had to buy a brand-new 2018 Chevy Equinox after theirs was totaled in an accident.

HERTFORD — Saying she did so “just to be safe,” Hertford’s mayor has extended the town’s curfew for a few more days.

Mayor Earnell Brown announced Tuesday that the town’s curfew imposed Sept. 15 and scheduled to end Tuesday will be extended until 11:59 p.m. on Thursday.

Brown imposed the curfew after declaring a state of emergency in the wake of three shootings over a 13-hour period Sept. 13-14, including one that resulted in a man’s death.

Under the curfew, persons younger than 18 are required to be off Hertford’s public streets between 4 p.m. and 5:30 a.m.

Initially, adults 18 and older were required to be off the streets between 9 p.m. and 5:30 a.m. That’s been changed in the extension, however. The curfew for adults now doesn’t begin until 10 p.m.

There are exceptions in the curfew for scheduled doctor appointments, childcare needs, school and employment. However, the town said visits to the store, gas station or to pick up prescriptions should be performed during non-curfew hours.

Police do have the authority to cite curfew violators, he said.

“Officers have discretion on how to handle each incident on an individual basis,” he said.

In her statement extending the curfew, Mayor Brown said the town appreciated citizens’ compliance with the order.

“Thanks to all citizens for adhering to these strict measures to keep everyone safe,” she said.

Brown also asked citizens not to let down their guard, urging them to “be cautious and stay aware of their surroundings.”

The Hertford Police Department and the Perquimans County Sheriff’s Office are investigating all three shootings with assistance from the State Bureau of Investigation. As of Wednesday morning, no arrests had been made in any of the shootings.

In a letter published last week in The Perquimans Weekly, Brown spoke not only as the police chief but as a father in seeking the community’s cooperation. He also cautioned that more violence may be planned.

“As a resident of Hertford and a father, your family’s safety is our utmost priority. We are working diligently to solve these shooting incidents but have received credible information that more violence may occur,” Brown said. “Your police department is addressing this threat by using increased enforcement activities, partnering with other state and local departments to ensure our community stays as safe as possible.”

The chief continued by addressing residents of four streets.

“I am asking as a father, for all our residents on King Street, Stokes Street, Dobbs Street and Market Street to request your children and young adults to not congregate and to stay inside as much as possible,” he said. “I am requesting anyone with information to come forward and help our investigators. This is not the time to keep secrets and protect violent individuals. Remember bullets have no names. Anyone who lives in the town of Hertford, please report anything you believe to be suspicious. Every tip helps. If you know something, say something.”

Albemarle Regional Health Services is reporting two more deaths from COVID-19 in Currituck County, one connected to an ongoing outbreak at an assisted living facility.

ARHS said both persons were over 65 and one was a resident of Currituck House, where 14 total COVID-19 cases had been reported as of Tuesday, according to the N.C. Department of Health and Human Services. Of those cases, 10 involve residents and four involve staff members.

The deaths were the second and third in Currituck related to the COVID-19 pandemic. They bring the overall death toll from the respiratory disease in ARHS’ eight-county region to 83.

No other county had more than 18 active cases. 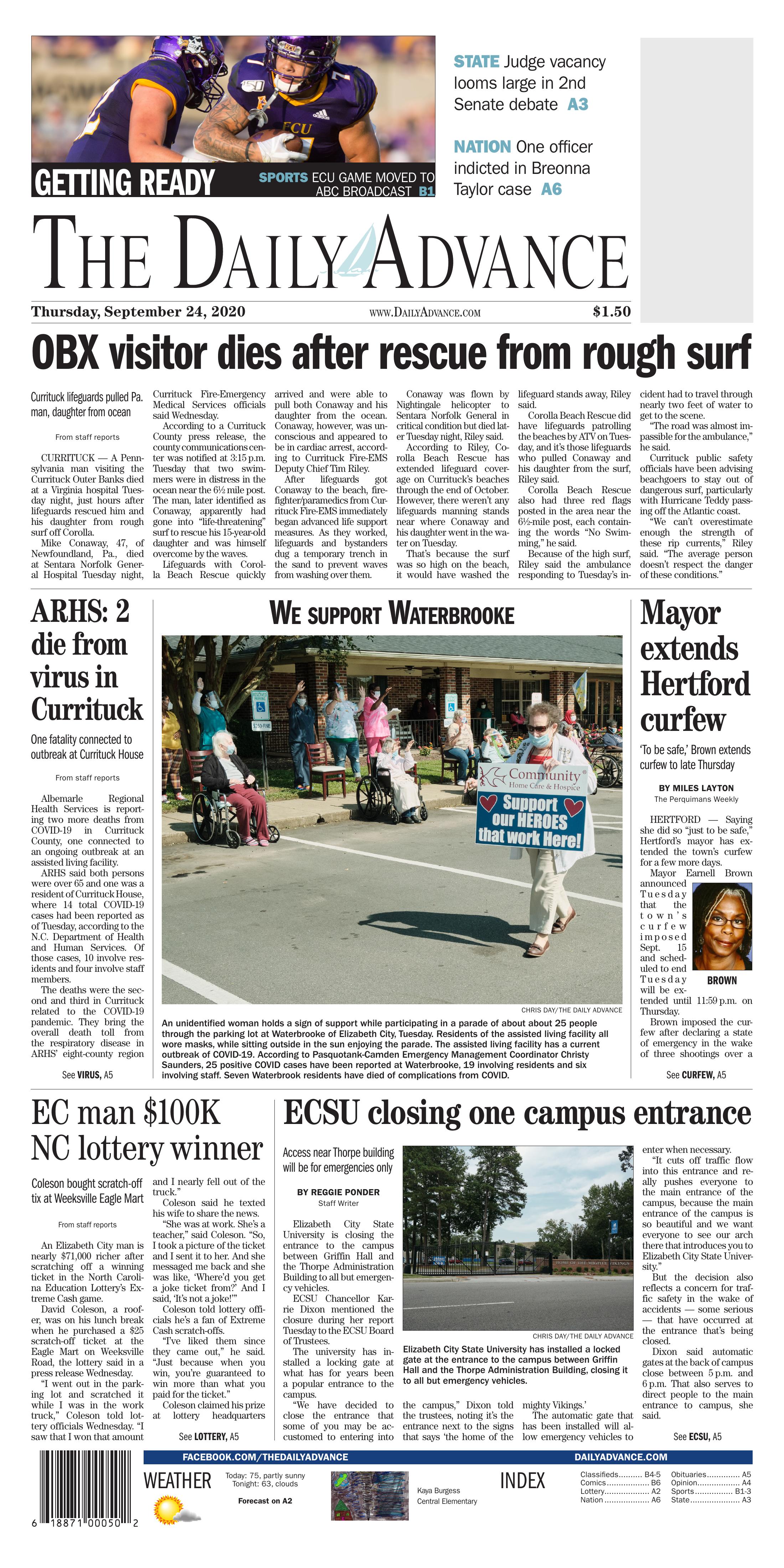