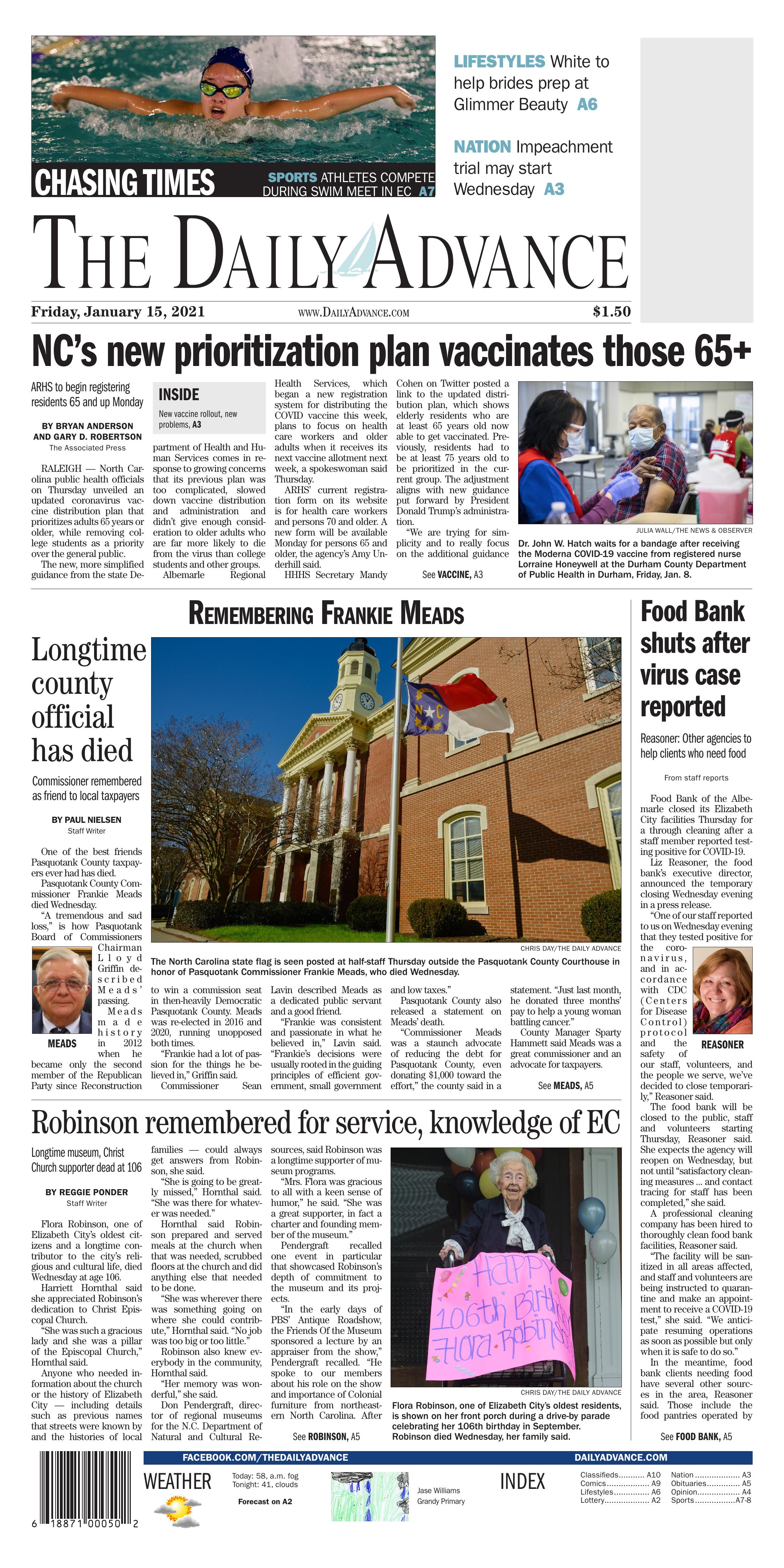 The North Carolina state flag is seen posted at half-staff Thursday outside the Pasquotank County Courthouse in honor of Pasquotank Commissioner Frankie Meads, who died Wednesday.

Frankie Meads (center), seen in this Dec. 7 file photo taking the oath of office for a third term on the Pasquotank Board of Commissioners, has died, county commissioners said Thursday. Administering the oath to Meads is Superior Court Judge J.C. Cole. Holding the Bible is Meads' granddaughter.

One of the best friends Pasquotank County taxpayers ever had has died.

“A tremendous and sad loss,” is how Pasquotank Board of Commissioners Chairman Lloyd Griffin described Meads’ passing.

Meads made history in 2012 when he became only the second member of the Republican Party since Reconstruction to win a commission seat in then-heavily Democratic Pasquotank County. Meads was re-elected in 2016 and 2020, running unopposed both times.

“Frankie had a lot of passion for the things he believed in,” Griffin said.

“Frankie was consistent and passionate in what he believed in,” Lavin said. “Frankie’s decisions were usually rooted in the guiding principles of efficient government, small government and low taxes.”

“Commissioner Meads was a staunch advocate of reducing the debt for Pasquotank County, even donating $1,000 toward the effort,” the county said in a statement. “Just last month, he donated three months’ pay to help a young woman battling cancer.”

County Manager Sparty Hammett said Meads was a great commissioner and an advocate for taxpayers.

“Tremendous loss for the county,” Hammett said of Meads’ death. “One of Commissioner Meads’ big focuses was reducing the amount of general fund debt. He will definitely be missed by the board, staff and the citizens.’’

At-large commissioner Charles Jordan considers his fellow county commissioners family and said that he was extremely saddened when he heard the news of Meads’ passing.

“We have a group of commissioners that work very well together and once you start working together you start to become like family,” Jordan said. “He was a very knowledgeable about things and he had very good ideas. He was passionate about Pasquotank County and he really did his homework.”

Meads served on numerous county boards during his eight years as a commissioner, including the county’s Emergency Medical Services Board, the Solid Waste/Landfill Committee, the Animal Control Board, the Albemarle Resource Conservation & Development Council, and the SPCA Board.

Flags at all county facilities are being flown at half-staff in Meads’ honor, the county said. “Our thoughts and prayers are with the Meads family,” the county’s statement reads.

State law requires that Meads’ replacement be a Republican. The Pasquotank Republican Party will have 30 days to submit a nominee to the board who lives in the Southern Outside district Meads represented to fill out the remainder of Meads’ term, which ends in December 2024.

Flora Robinson, one of Elizabeth City’s oldest residents, is shown on her front porch during a drive-by parade celebrating her 106th birthday in September. Robinson died Wednesday, her family said.

Flora Robinson, one of Elizabeth City’s oldest citizens and a longtime contributor to the city’s religious and cultural life, died Wednesday at age 106.

“She was such a gracious lady and she was a pillar of the Episcopal Church,” Hornthal said.

Anyone who needed information about the church or the history of Elizabeth City — including details such as previous names that streets were known by and the histories of local families — could always get answers from Robinson, she said.

“She is going to be greatly missed,” Hornthal said. “She was there for whatever was needed.”

Hornthal said Robinson prepared and served meals at the church when that was needed, scrubbed floors at the church and did anything else that needed to be done.

“She was wherever there was something going on where she could contribute,” Hornthal said. “No job was too big or too little.”

Robinson also knew everybody in the community, Hornthal said.

“Her memory was wonderful,” she said.

Don Pendergraft, director of regional museums for the N.C. Department of Natural and Cultural Resources, said Robinson was a longtime supporter of museum programs.

“Mrs. Flora was gracious to all with a keen sense of humor,” he said. “She was a great supporter, in fact a charter and founding member of the museum.”

Pendergraft recalled one event in particular that showcased Robinson’s depth of commitment to the museum and its projects.

“In the early days of PBS’ Antique Roadshow, the Friends Of the Museum sponsored a lecture by an appraiser from the show,” Pendergraft recalled. “He spoke to our members about his role on the show and importance of Colonial furniture from northeastern North Carolina. After the presentation the group was invited to Mrs. Flora’s house for a social hour. She was on point and the most gracious host. She was a wealth of knowledge and hospitality.”

Robinson lived in the large white house on Main Street across the street from the Pasquotank County Courthouse. Because of social distancing restrictions, friends gave her a drive-by birthday parade there in September on her 106th birthday.

Jim McGee, an Episcopal priest and Elizabeth City native, mentioned Robinson’s love for the church and dedication to its programs and ministries.

“At Christ Church she has been an institution for many, many years,” McGee said. “She was always there. She was a faithful worshiper. She was such a sweet lady and just a friend to everybody and always ready to help.”

Robinson’s son, Charlie Robinson, said Nags Head was always an important part of his mother’s life. She took her first step at Nags Head in 1915, he said, noting there wasn’t much down there at that time.

But her family spent summers at the Outer Banks community as she was growing up, and the tradition continued as both he and his brother were growing up, he said.

Flora Robinson went to school in Elizabeth City and then attended St. Mary’s College in Raleigh and later the University of North Carolina at Chapel Hill. Her son noted there were very few women who attended UNC at that time and they had to transfer in from other colleges.

Flora Robinson was interested in the museum, served on a number of boards and foundations in the community, and also did a lot of work behind the scenes, her son said.

“She didn’t want people to know that she was responsible (for many of her contributions),” he said. “No plaque and that sort of thing.”

He said she always supported him and his brother in basketball, Boy Scouts and other endeavors, and also insisted that they finish their school work before playing sports.

Twiford Funeral Home’s Memorial Chapel is in charge of arrangements.

Food Bank of the Albemarle closed its Elizabeth City facilities Thursday for a through cleaning after a staff member reported testing positive for COVID-19.

“One of our staff reported to us on Wednesday evening that they tested positive for the coronavirus, and in accordance with CDC (Centers for Disease Control) protocol and the safety of our staff, volunteers, and the people we serve, we’ve decided to close temporarily,” Reasoner said.

The food bank will be closed to the public, staff and volunteers starting Thursday, Reasoner said. She expects the agency will reopen on Wednesday, but not until “satisfactory cleaning measures ... and contact tracing for staff has been completed,” she said.

“The facility will be sanitized in all areas affected, and staff and volunteers are being instructed to quarantine and make an appointment to receive a COVID-19 test,” she said. “We anticipate resuming operations as soon as possible but only when it is safe to do so.”

In the meantime, food bank clients needing food have several other sources in the area, Reasoner said. Those include the food pantries operated by the Salvation Army, First Baptist Church, Samuel Chapel and the Church of God of Prophecy, among others.

To find the nearest food pantry, go to the food bank’s website at www.afoodbank.org. Using the agency locator feature, put in your zip code and a list of pantries will appear, along with their locations and phone number.

“I know our partners will step up while we are addressing the health and well-being of our team,” Reasoner said.

Reasoner also noted that Albemarle Food Pantry was open on Tuesday and the mobile food pantries at Sheep Harney Elementary School and in South Mills were held Wednesday evening.

“Hopefully, this will carry folks through until next Friday, (Jan.) 22nd, when our pantry will reopen or they can visit one of our local partners,” she said. “There should be no reason anyone goes hungry.”

Reasoner said persons who may have been in close contact with the affected staff member have been informed of the employee’s positive test for COVID-19. Others who have been at the food bank within the past five days and have COVID-related concerns should contact her at 252-335-4035, ext. 110 or by email at lreasoner@afoodbank.org.

The Food Bank will continue health safety measures it introduced in April, such as conducting temperature checks on staff and volunteers upon their arrival, Reasoner said. Staff and volunteers will also continue to be required to use gloves when packing and sorting food, wear facemasks, and wash their hands before entering the building, and after food and restroom breaks. Also, high-touch common surfaces will continue to be sanitized.

“We are also working with Albemarle Regional Health Services for guidance on working with staff and volunteers so that we can safely resume operations as soon as possible,” Reasoner added.