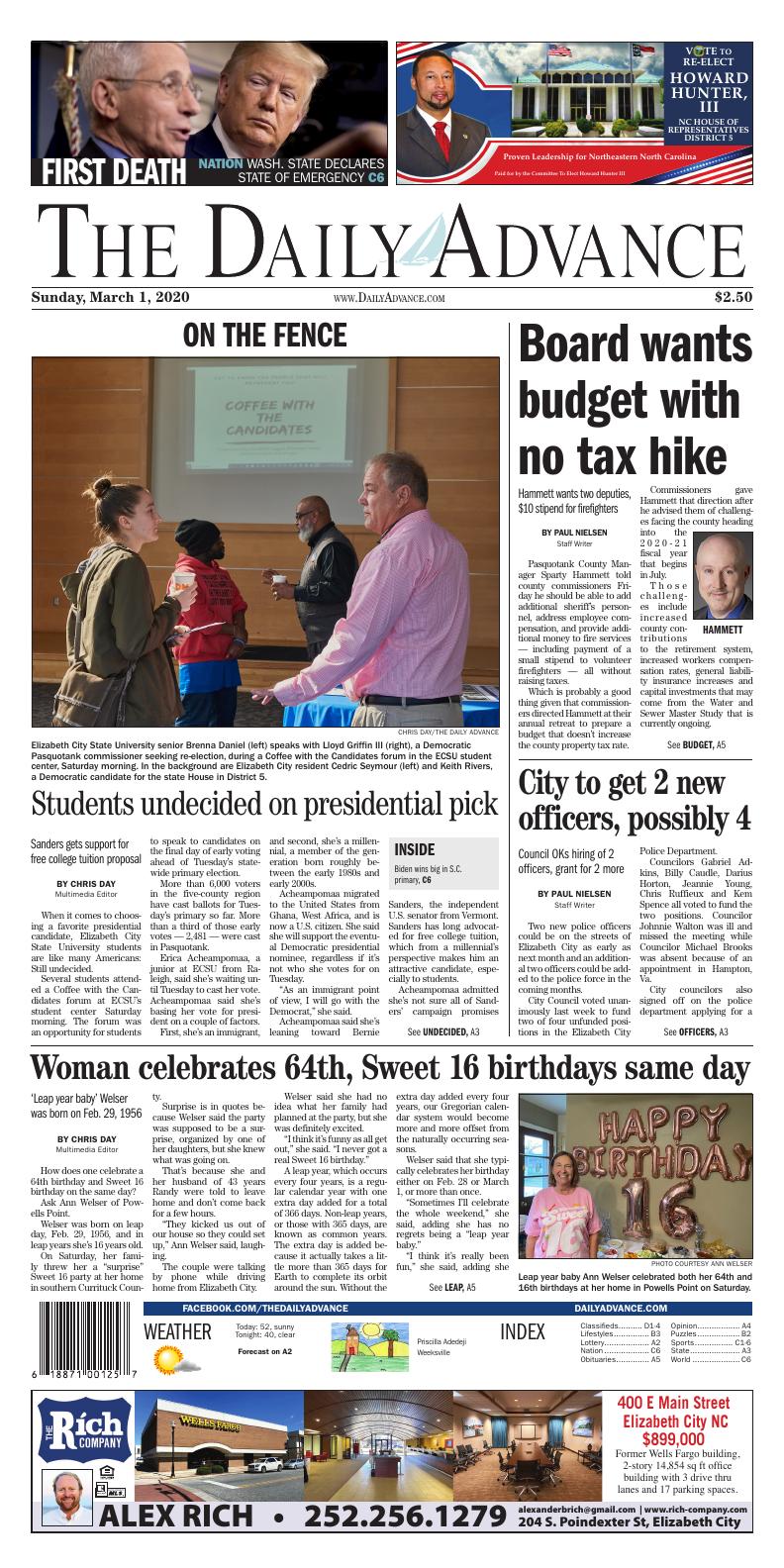 When it comes to choosing a favorite presidential candidate, Elizabeth City State University students are like many Americans: Still undecided.

Several students attended a Coffee with the Candidates forum at ECSU’s student center Saturday morning. The forum was an opportunity for students to speak to candidates on the final day of early voting ahead of Tuesday’s statewide primary election.

More than 6,000 voters in the five-county region have cast ballots for Tuesday’s primary so far. More than a third of those early votes — 2,481 — were cast in Pasquotank.

Erica Acheampomaa, a junior at ECSU from Raleigh, said she’s waiting until Tuesday to cast her vote. Acheampomaa said she’s basing her vote for president on a couple of factors.

First, she’s an immigrant, and second, she’s a millennial, a member of the generation born roughly between the early 1980s and early 2000s.

Acheampomaa migrated to the United States from Ghana, West Africa, and is now a U.S. citizen. She said she will support the eventual Democratic presidential nominee, regardless if it’s not who she votes for on Tuesday.

“As an immigrant point of view, I will go with the Democrat,” she said.

Acheampomaa said she’s leaning toward Bernie Sanders, the independent U.S. senator from Vermont. Sanders has long advocated for free college tuition, which from a millennial’s perspective makes him an attractive candidate, especially to students.

Acheampomaa admitted she’s not sure all of Sanders’ campaign promises would ever pass Congress, but she’s encouraged by how he has mainstreamed ideas like free college tuition and other key social issues.

“Right now he is the person. If I had to vote I’m going to pick him,” she said.

Elizabeth Warren is another candidate she finds appealing, but the Massachusetts senator has more work to do before voters in Acheampomaa’s age range support her, she said.

“She needs to do more to gain millennials’ trust,” she said.

Brenna Daniel, a senior from Burke County, in the western part of the state, said she’ll cast her vote via absentee ballot.

When asked if she had a frontrunner for presidential candidate, Daniel, who’s registered unaffiliated, laughed.

“Not at all,” she said. “I’m fine with several of them but I’m not gung-ho about any of them.”

Daniel said she wasn’t opposed to some of Sanders’ ideas, such as free college tuition.

“To me that’s not as radical as people think it is,” she said, commenting on criticism Sanders has received for being a Democratic socialist. “I don’t see programs like that as, ‘Oh, you’re about to go communist.’”

Daniel pointed to Germany, for example, where free college tuition has been successful for years.

Daniel is studying aviation science at ECSU. She cited the federal government’s role in the U.S. aviation industry in helping to keep the cost of air travel low.

Daniel wasn’t ready to commit on supporting the eventual Democratic nominee, regardless if it were her pick.

“That would depend on who would get it,” she said.

Rivers, who is president of the Pasquotank branch of the NAACP, is challenging Hunter for his seat in the 5th House District, which includes Pasquotank. The winner in Tuesday’s Democratic primary will face Republican Donald Kim Kirkland of Ahoskie in the fall general election.

Griffin, who holds the Northern Inside seat on the Pasquotank Board of Commissioners, is facing a challenge from first-time political candidate Edmond Koker. The winner will take on Republican Paul Moncla in the fall.

Kaiya Smith, a volunteer with the Campus Vote Project, said she planned to vote early before Saturday’s 3 p.m. deadline. The junior from Rocky Mount said she won’t know who she’ll vote for president till she’s filling out her ballot.

All the current Democratic candidates have the potential to be good presidents, Smith said. She wants the candidate she votes for to understand how to continue improving racial equality throughout the nation. A lot of positive change has occurred in recent years but there’s still more work that can be done, she said.

Smith said the Campus Vote Project aims to inform students about the key election issues and the candidates.

“I really hope people get out and vote,” she said. “It’s really important. This is the big one.”

Part of the Campus Vote Project’s work included a student-voter registration drive. Smith and others believe college students will play a key role in this year’s general election.

“They’re a big part of how this election will go,” said Smith.

Leap year baby Ann Welser celebrated both her 64th and 16th birthdays at her home in Powells Point on Saturday.

How does one celebrate a 64th birthday and Sweet 16 birthday on the same day?

On Saturday, her family threw her a “surprise” Sweet 16 party at her home in southern Currituck County.

Surprise is in quotes because Welser said the party was supposed to be a surprise, organized by one of her daughters, but she knew what was going on.

That’s because she and her husband of 43 years Randy were told to leave home and don’t come back for a few hours.

“They kicked us out of our house so they could set up,” Ann Welser said, laughing.

The couple were talking by phone while driving home from Elizabeth City.

Welser said she had no idea what her family had planned at the party, but she was definitely excited.

A leap year, which occurs every four years, is a regular calendar year with one extra day added for a total of 366 days. Non-leap years, or those with 365 days, are known as common years. The extra day is added because it actually takes a little more than 365 days for Earth to complete its orbit around the sun. Without the extra day added every four years, our Gregorian calendar system would become more and more offset from the naturally occurring seasons.

Welser said that she typically celebrates her birthday either on Feb. 28 or March 1, or more than once.

“Sometimes I’ll celebrate the whole weekend,” she said, adding she has no regrets being a “leap year baby.”

“I think it’s really been fun,” she said, adding she enjoys meeting other people who share her unique birthday.

Joking, Randy Welser said one advantage for him has been if he forgets his wife’s birthday on Feb. 28 he can still get it right on March 1.

This year, though, the pressure was on him to remember, he said.

Ann Welser said she and her husband have three daughters and nine grandchildren.

Which is probably a good thing given that commissioners directed Hammett at their annual retreat to prepare a budget that doesn’t increase the county property tax rate.

Commissioners gave Hammett that direction after he advised them of challenges facing the county heading into the 2020-21 fiscal year that begins in July.

Those challenges include increased county contributions to the retirement system, increased workers compensation rates, general liability insurance increases and capital investments that may come from the Water and Sewer Master Study that is currently ongoing.

Another unknown are the capital needs for the Elizabeth City-Pasquotank Public Schools. However, the county is expecting to know what those needs are in the next month.

Commissioner Lloyd Griffin suggested that the schools ask for a “reasonable amount” for capital needs.

“We never know what school capital needs are going to be but I am meeting monthly with the school superintendent,” Hammett said.

“We all realize we have a drug problem in the county, we have a violent crime problem,” Hammett said. “The sheriff has asked for five positions and I trying to get him at least two and a K-9.”

The county’s chief building inspector’s position has been vacant since July and the county has not been able to interview a single candidate. There is also vacancy in the information technology department that “sorely” needs to be filled, Hammett said.

“There are several other positions and it is a major need throughout the county,” he said. “The sheriff’s office loses employees, too. The bulk of our department directors are eligible for retirement within the next five years.’’

Commissioner Sean Lavin agreed that the county needs to look at what it pays employees.

“We have run out of road to kick that can (down the road),” he said.

Hammett is also going to propose paying volunteer firemen a stipend of $10 per call to help retain and recruit new volunteers which would increase coverage in the county.

“It is something a lot of jurisdictions are doing,” Hammett said. “I think that is critical for those volunteers. It’s a nominal fee but it will be something that can help them with their gas, uniform cleaning or maybe get them a sandwich. It is not a lot of money but it is something I think can help us.”

Hammett also encouraged the board to pass a resolution that would ask local businesses to allow volunteer firemen to answer emergency calls while working at their full-time jobs since most calls come during the day.

“It may free up some up some of our firefighters that work locally to respond to calls,” Hammett said. “It may have some positive impact. Hopefully, this will aid us in providing that coverage from 8 a.m. to 5 p.m. Monday through Friday.”

The county is looking at paying an additional mandated $160,000 increase to the state retirement system, and worker’s compensation costs could increase by 2.5 percent.

“We always have increases in worker’s comp and general liability insurance but we won’t know what those numbers are for several months,” Hammett said.

He noted he’ll go over those costs in more detail during the county’s budgeting process.

Councilors Gabriel Adkins, Billy Caudle, Darius Horton, Jeannie Young, Chris Ruffieux and Kem Spence all voted to fund the two positions. Councilor Johnnie Walton was ill and missed the meeting while Councilor Michael Brooks was absent because of an appointment in Hampton, Va.

City councilors also signed off on the police department applying for a grant from the U.S. Department of Justice that could possibly add two more police officers to the department’s Criminal Intelligence Unit.

The police department has 64 sworn officer positions but four of those went unfunded this fiscal year because of a lack of qualified candidates.

Since then, police Chief Eddie Buffaloe Jr. has identified candidates for two of the positions, both with extensive experience.

Both positions will be added to the city budget for the 2020-21 fiscal year that begins July 1.

If the grant is approved from the DOJ’s $400 million pool of money, the city would have to kick in approximately $66,000 over three years. The city would also have to completely fund the two positions for an additional 12 months at the end of three years.

“This would increase the number of sworn officers we have from 64 to 66,” said City Manager Rich Olson.

Law enforcement agencies applying for the DOJ money are required to select a specific problem or focus area such as violent crime, homeland and border security problems or school-based policing.

City staff recommended that violent crime be selected as the city’s focus area and that the two positions, if the grant money is awarded, be used to increase the police department’s Criminal Intelligence Unit from a two-person unit to a four-person unit. 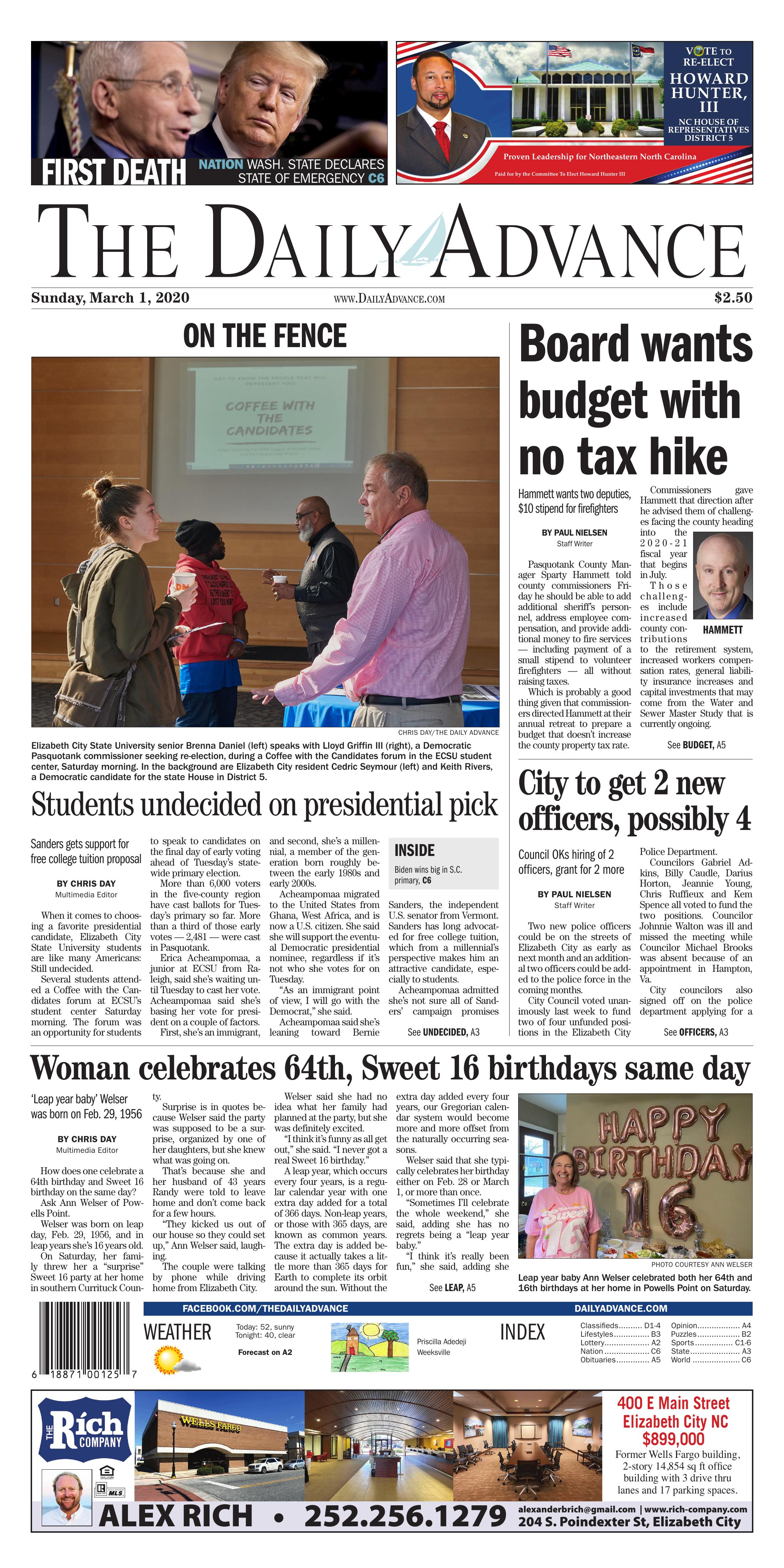