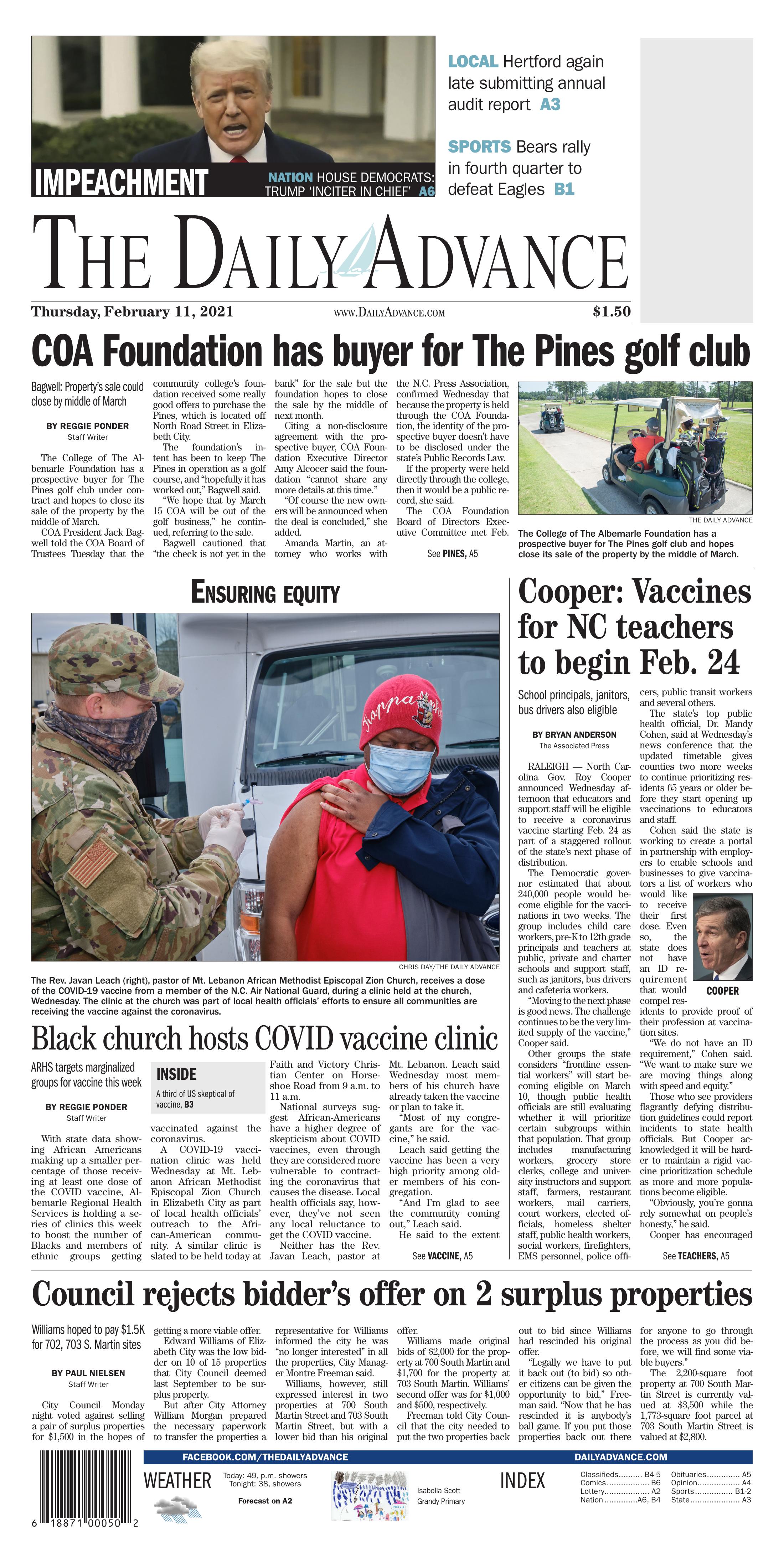 The College of The Albemarle Foundation has a prospective buyer for The Pines golf club and hopes to announce the new owner at a press conference next week.

The College of The Albemarle Foundation has a prospective buyer for The Pines golf club under contract and hopes to close its sale of the property by the middle of March.

COA President Jack Bagwell told the COA Board of Trustees Tuesday that the community college’s foundation received some really good offers to purchase the Pines, which is located off North Road Street in Elizabeth City.

The foundation’s intent has been to keep The Pines in operation as a golf course, and “hopefully it has worked out,” Bagwell said.

“We hope that by March 15 COA will be out of the golf business,” he continued, referring to the sale.

Bagwell cautioned that “the check is not yet in the bank” for the sale but the foundation hopes to close the sale by the middle of next month.

“Of course the new owners will be announced when the deal is concluded,” she added.

Amanda Martin, an attorney who works with the N.C. Press Association, confirmed Wednesday that because the property is held through the COA Foundation, the identity of the prospective buyer doesn’t have to be disclosed under the state’s Public Records Law.

If the property were held directly through the college, then it would be a public record, she said.

The COA Foundation Board of Directors Executive Committee met Feb. 4 to discuss multiple bids that had been received for the property.

“An offer was accepted at the meeting and the property is under contract,” Alcocer said. “There is a due diligence period of 15 days and once everything has been vetted, the Foundation hopes to close on the property before the end of March.”

Businessman Bill Taylor donated The Pines to the COA Foundation in 2017. Not long afterward, the foundation board voted to partner with YMCA of South Hampton Roads to operate the facility. Under the agreement, the Y would manage The Pines’ golf course, swimming pool and other facilities.

Citing operating losses, YMCA officials began asking for local government help for The Pines in 2019, warning that without it, the facility might have to be closed. Both Elizabeth City and Pasquotank County gave the YMCA $25,000, while the joint city-county Tourism Development Authority gave the YMCA a $5,000 grant to help market The Pines outside the area.

Citing operating losses of about $400,000 at The Pines, the YMCA surrendered complete ownership of the facility back to the COA Foundation on Dec. 31. Both the YMCA and the foundation said while some of the operating loss happened before the COVID-19 pandemic, the economic crunch caused by the health crisis exacerbated the financial hit.

Foundation Board of Directors Chairman Doug Gardner told the college’s trustees that the foundation’s plan was to contract with a PGA-certified golf course Realtor to market the property as a golf course and find a golf course operator who would take over its operations.

The preliminary estimate is that the course might fetch as much as $1.2 million, foundation officials said in December.

The COA Foundation Board said it was committed to keeping The Pines as a golf course if possible.

The Rev. Javan Leach (right), pastor of Mt. Lebanon African Methodist Episcopal Zion Church, receives a dose of the COVID-19 vaccine from a member of the N.C. Air National Guard, during a clinic held at the church, Wednesday. The clinic at the church was part of local health officials’ efforts to ensure all communities are receiving the vaccine against the coronavirus.

Residents line up in their vehicles to wait 15 minutes after receiving a dose of the COVID-19 vaccination at Mt. Lebanon AME Church, Wednesday. A nurse is seen between the cars checking in with occupants to ensure they were not experiencing adverse reactions to the vaccine.

With state data showing African Americans making up a smaller percentage of those receiving at least one dose of the COVID vaccine, Albemarle Regional Health Services is holding a series of clinics this week to boost the number of Blacks and members of ethnic groups getting vaccinated against the coronavirus.

A COVID-19 vaccination clinic was held Wednesday at Mt. Lebanon African Methodist Episcopal Zion Church in Elizabeth City as part of local health officials’ outreach to the African-American community. A similar clinic is slated to be held today at Faith and Victory Christian Center on Horseshoe Road from 9 a.m. to 11 a.m.

National surveys suggest African-Americans have a higher degree of skepticism about COVID vaccines, even through they are considered more vulnerable to contracting the coronavirus that causes the disease. Local health officials say, however, they’ve not seen any local reluctance to get the COVID vaccine.

Neither has the Rev. Javan Leach, pastor at Mt. Lebanon. Leach said Wednesday most members of his church have already taken the vaccine or plan to take it.

“Most of my congregants are for the vaccine,” he said.

Leach said getting the vaccine has been a very high priority among older members of his congregation.

“And I’m glad to see the community coming out,” Leach said.

He said to the extent that some skepticism about the vaccines may exist in African-American communities, churches can help bridge that gap.

“When you bring it to the African-American churches you are going to get more participation,” Leach said. “Numbers are going to go up.”

“And it’s working,” he added, gesturing toward a line of cars lined up in front of Mt. Lebanon on Wednesday.

If there is skepticism about the vaccine, Leach said there may be some among younger people. He believes, however, that the more young people hear about other young people getting vaccinated, the more will want to get the vaccine.

Leach noted that some younger people were getting vaccinated at Wednesday’s clinic. “And I think that’s because they know us,” he said.

At least one 20-year-old received the vaccine during the clinic. Janiyah Sutton said she heard about the clinic from her mother, who works for the Department of Social Services.

She said she had been waiting for older adults to get the vaccine, which was why she hadn’t already been vaccinated. She decided to go ahead and get the vaccine, she said, because she works in a pharmacy and felt “I also needed to get it.”

Leach said there were eight members of the congregation helping out with the clinic, which ran from 1 p.m. to 3 p.m. He said the goal was to vaccinate at least 100 people. By 1:20 p.m., Mt. Lebanon was well on its way toward that goal: at least 60 people had been vaccinated.

Although Wednesday’s clinic was part of health officials’ outreach to the African-American community, the event was open to people of all races and ethnic backgrounds.

In fact, First United Methodist Church, which is a predominantly white congregation, heard about the clinic and provided information about it to church members who had been looking to get vaccinated.

“I’m grateful for the opportunity to get (the vaccine),” said Lee Leidy, who explained that she had heard about the clinic from a friend. “I think it’s socially responsible to get the vaccine.”

Myra Rice also mentioned social responsibility as why she was getting the vaccine. “This is my step to help the community,” she said.

ARHS does not currently have demographic information about those in the region who’ve been vaccinated. But state data show African Americans receiving at least one dose of the vaccine in significant numbers in only two of ARHS’ eight counties: Bertie, where Blacks made up 47.6% of vaccinations as of Wednesday; and Hertford County, where they made up 45.2% of vaccinations.

It wasn’t clear how many whites were receiving the vaccine in the two counties; both contain large numbers of persons whose race was “suppressed” for data collection purposes, according to the N.C. Department of Health and Human Services website.

Amy Underhill, a spokeswoman for ARHS, said the agency is targeting all populations for the vaccine, “including those historically marginalized.”

“Throughout the ARHS region, there are communities members who have barriers to receiving care and are at risk for poor health outcomes,” Underhill said. “Therefore, having a more targeted approach with vaccine clinics helps to eliminate some of the disparities that exist.”

Underhill said holding clinics at churches is an effective strategy for eliminating those disparities.

“ARHS is utilizing our relationships with local churches and other agencies within the region to host the vaccine clinics at their site,” Underhill said.

City Council Monday night voted against selling a pair of surplus properties for $1,500 in the hopes of getting a more viable offer.

Edward Williams of Elizabeth City was the low bidder on 10 of 15 properties that City Council deemed last September to be surplus property.

But after City Attorney William Morgan prepared the necessary paperwork to transfer the properties a representative for Williams informed the city he was “no longer interested” in all the properties, City Manager Montre Freeman said.

Freeman told City Council that the city needed to put the two properties back out to bid since Williams had rescinded his original offer.

“Legally we have to put it back out (to bid) so other citizens can be given the opportunity to bid,” Freeman said. “Now that he has rescinded it is anybody’s ball game. If you put those properties back out there for anyone to go through the process as you did before, we will find some viable buyers.’’