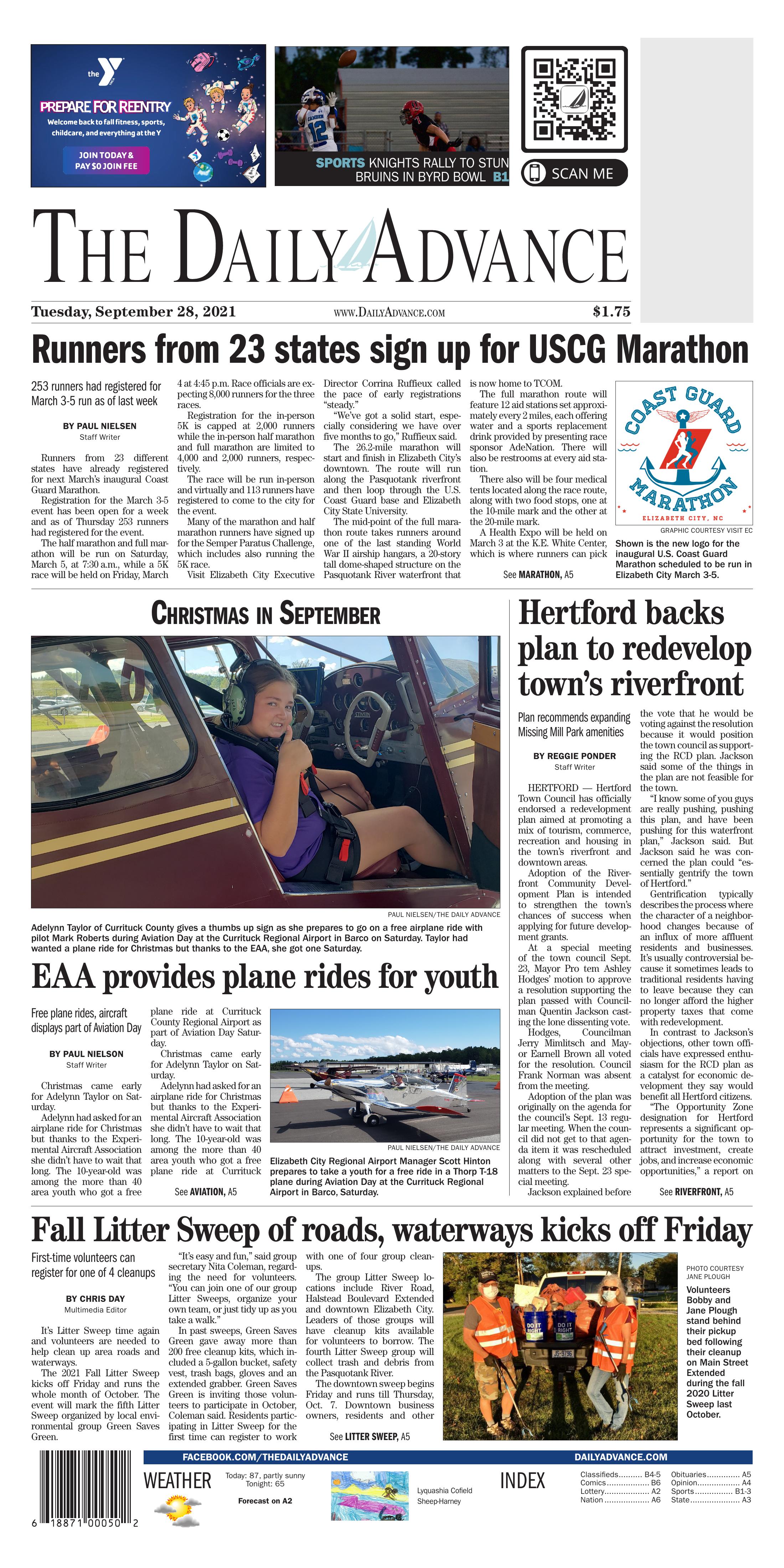 Shown is the new logo for the inaugural U.S. Coast Guard Marathon scheduled to be run in Elizabeth City March 3-5.

Registration for the March 3-5 event has been open for a week and as of Thursday 253 runners had registered for the event.

The race will be run in-person and virtually and 113 runners have registered to come to the city for the event.

Many of the marathon and half marathon runners have signed up for the Semper Paratus Challenge, which includes also running the 5K race.

“We’ve got a solid start, especially considering we have over five months to go,” Ruffieux said.

The 26.2-mile marathon will start and finish in Elizabeth City’s downtown. The route will run along the Pasquotank riverfront and then loop through the U.S. Coast Guard base and Elizabeth City State University.

The mid-point of the full marathon route takes runners around one of the last standing World War II airship hangars, a 20-story tall dome-shaped structure on the Pasquotank River waterfront that is now home to TCOM.

The full marathon route will feature 12 aid stations set approximately every 2 miles, each offering water and a sports replacement drink provided by presenting race sponsor AdeNation. There will also be restrooms at every aid station.

There also will be four medical tents located along the race route, along with two food stops, one at the 10-mile mark and the other at the 20-mile mark.

A Health Expo will be held on March 3 at the K.E. White Center, which is where runners can pick up their race bib and gift bag.

The Coast Guard is the last of the military branches to have a marathon and this year’s race was held virtually because of the COVID-19 pandemic. Over 11,000 runners from all 50 states competed either in the half marathon or full marathon virtually.

“I am excited for the first-ever, in-person Coast Guard Marathon,” said Base Elizabeth City Commanding Officer Brook Sherman. “The completely virtual inaugural event this year was more successful than we could have imagined and set the pace for this legacy event in honor of the greater Coast Guard for years to come. I am personally looking forward to running with and meeting participants from across the nation in Elizabeth City for the March 2022 event.”

Adelynn Taylor of Currituck County gives a thumbs up sign as she prepares to go on a free airplane ride with pilot Mark Roberts during Aviation Day at the Currituck Regional Airport in Barco on Saturday. Taylor had wanted a plane ride for Christmas but thanks to the EAA, she got one Saturday.

Elizabeth City Regional Airport Manager Scott Hinton prepares to take a youth for a free ride in a Thorp T-18 plane during Aviation Day at the Currituck Regional Airport in Barco, Saturday.

Adelynn had asked for an airplane ride for Christmas but thanks to the Experimental Aircraft Association she didn’t have to wait that long. The 10-year-old was among the more than 40 area youth who got a free plane ride at Currituck County Regional Airport as part of Aviation Day Saturday.

Adelynn had asked for an airplane ride for Christmas but thanks to the Experimental Aircraft Association she didn’t have to wait that long. The 10-year-old was among the more than 40 area youth who got a free plane ride at Currituck County Regional Airport as part of Aviation Day Saturday.

Pilot Mark Roberts with the Elizabeth City EAA took Adelynn for a 25-minute ride that included seeing part of Currituck Sound. Roberts was one of a half-dozen pilots who took youth ages 8-17 on the free ride.

Adelynn, who is a fifth-grader at Shawboro Elementary School, said she was a little scared before her first flight but that quickly turned to excitement.

“I liked it, it was fun,” she said. “The best part of the flight was being up in the air and seeing everything.”

Roberts described the ride as a little bit bumpy but Adelynn didn’t seem fazed by it.

“It was only bumpy at first,” she said.

Airport Manager William Nelson estimated that well over 800 people visited the free event on Saturday. He said Aviation Day will become an annual event each fall.

“It was a great turnout and a lot better than I had expected,” Nelson said. “We had a half-a-mile of aircraft stretched on the taxiway and there were times during the day we couldn’t even see the other end of the taxiway.”

The EAA provides the rides through its “Young Eagles” program, which is designed to introduce aviation to young people as a possible career path. Roberts said that EAA nationally has provided more than two million free plane rides to youth.

“Your local high schools really don’t seem to have enough information about aviation and the aviation industry and what the opportunities are,” Roberts said. “We know of people that we have taken for a ride who have later gone on to an aviation career. That is the motivation for us.”

“We run our program to 1 p.m. because we find in the afternoon it (flying conditions) deteriorates and that it can be a not-so-pleasant ride,” Roberts said. “We don’t want to take kids for a ride when it is hot and bumpy. We want the best atmospheric conditions to get the best results. We want it to be a positive experience.”

Chaz Mott of Chesapeake, Virginia, brought one of his three Cessna airplanes to Aviation Day and gave rides to several youth while also directing planes in and out of the taxi area.

In 2019, Mott ranked third in Virginia among pilots in the Young Eagles program when he provided free plane rides to 37 youth.

“We are out here giving back to the community,” Mott said. “I can take up to three in my plane. At other airports, we have flown up to 200 in a day.”

John and Rose Duncan live in the aviation community Brady Landing Airpark adjacent to the airport. They displayed their two experimental planes and answered questions from visitors throughout the day.

The Duncans often fly one of their experimental planes to different airports for breakfast or lunch.

“One of our favorites is the Suffolk BBQ at the Suffolk airport,” John Duncan said. “It’s about 20 minutes from here at the airport to Suffolk.”

And Duncan doesn’t take the most direct route to get there.

“I don’t go over the (Dismal) swamp, I go around the swamp,” Duncan said. “In case there was a problem, I would just as soon not be in the swamp.”

The 2021 Fall Litter Sweep kicks off Friday and runs the whole month of October. The event will mark the fifth Litter Sweep organized by local environmental group Green Saves Green.

“It’s easy and fun,” said group secretary Nita Coleman, regarding the need for volunteers. “You can join one of our group Litter Sweeps, organize your own team, or just tidy up as you take a walk.”

In past sweeps, Green Saves Green gave away more than 200 free cleanup kits, which included a 5-gallon bucket, safety vest, trash bags, gloves and an extended grabber. Green Saves Green is inviting those volunteers to participate in October, Coleman said. Residents participating in Litter Sweep for the first time can register to work with one of four group cleanups.

The group Litter Sweep locations include River Road, Halstead Boulevard Extended and downtown Elizabeth City. Leaders of those groups will have cleanup kits available for volunteers to borrow. The fourth Litter Sweep group will collect trash and debris from the Pasquotank River.

The downtown sweep begins Friday and runs till Thursday, Oct. 7. Downtown business owners, residents and other volunteers are encouraged to spend an hour picking up litter where needed. For Litter Sweep, the downtown is considered the area between Water and N. Road streets, east and west, and Elizabeth to Ehringhaus streets, north and south.

The following week on Oct. 9, also from 9 a.m. to 11 a.m., the Keep It Clean Crew will meet in the parking lot at River Road Sports Park for the River Road sweep.

Volunteers are asked to bring their own gloves, safety vests, grabbers and buckets. Additional trash bags will be available at the Pasquotank County Library.

A date has not been set for the River Sweep. Residents with a boat, canoe or kayak are encouraged to volunteer to do their own cleanup in October.

Learn more about how to participate in Litter Sweep by visiting Green Saves Green online at greensavesgreen.org/littersweep.

HERTFORD — Hertford Town Council has officially endorsed a redevelopment plan aimed at promoting a mix of tourism, commerce, recreation and housing in the town’s riverfront and downtown areas.

Adoption of the Riverfront Community Development Plan is intended to strengthen the town’s chances of success when applying for future development grants.

Hodges, Councilman Jerry Mimlitsch and Mayor Earnell Brown all voted for the resolution. Council Frank Norman was absent from the meeting.

Adoption of the plan was originally on the agenda for the council’s Sept. 13 regular meeting. When the council did not get to that agenda item it was rescheduled along with several other matters to the Sept. 23 special meeting.

Jackson explained before the vote that he would be voting against the resolution because it would position the town council as supporting the RCD plan. Jackson said some of the things in the plan are not feasible for the town.

“I know some of you guys are really pushing, pushing this plan, and have been pushing for this waterfront plan,” Jackson said. But Jackson said he was concerned the plan could “essentially gentrify the town of Hertford.”

Gentrification typically describes the process where the character of a neighborhood changes because of an influx of more affluent residents and businesses. It’s usually controversial because it sometimes leads to traditional residents having to leave because they can no longer afford the higher property taxes that come with redevelopment.

In contrast to Jackson’s objections, other town officials have expressed enthusiasm for the RCD plan as a catalyst for economic development they say would benefit all Hertford citizens.

“The Opportunity Zone designation for Hertford represents a significant opportunity for the town to attract investment, create jobs, and increase economic opportunities,” a report on the plan states. “Relatively modest investments by the public sector can leverage a much larger investment by the private sector.”

The document cites renewed population growth and the development of Interstate 87 as leading positive factors for economic development in Hertford.

The document retains proposals from an existing Riverfront Plan that include a bulkhead to mitigate flooding, expanded Missing Mill Park amenities, and a 1,000-seat amphitheater.

The Riverfront Plan also calls for “an inn and catering/restaurant facility to attract visitors and provide a destination on the water.”

The plan further calls for rehab of existing houses “in fair-poor condition” and preservation of as many historic buildings as possible.

A key role for the town in boosting downtown, according the report, is upgrading Hertford’s utility infrastructure.

“The plan greatly increases the amount and extent of public improvements on the northern riverfront,” the report states.

• A public walkway on top of the inland retaining wall;

• Walkways on piers with educational signage about the role of wetlands;

• Public restrooms near the amphitheater;

• Picnic pavilions with grills and seating;

• Children’s play equipment near the pavilions and central to the park;

• Public open grassed areas adjacent to the retaining wall; and

The report also cites “the possibility of cooperating with Edenton and Elizabeth City to lobby for a tourist train on the existing railroad tracks that connect the three towns.”

Townhouses are proposed to the west of Clark Street.

A link to the full plan has been posted on the town of Hertford’s website, https://www.townofhertfordnc.com/.