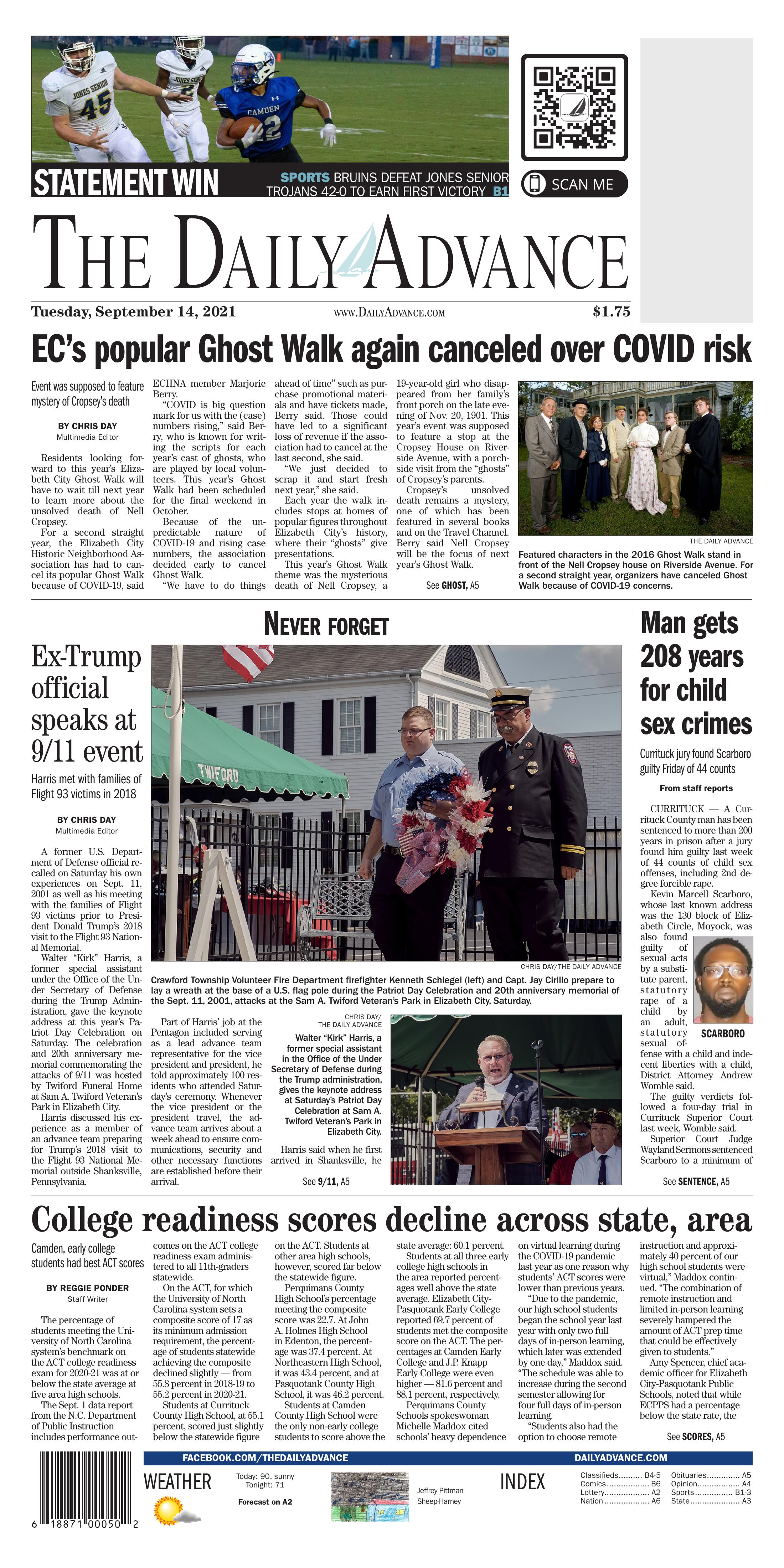 Featured characters in the 2016 Ghost Walk stand in front of the Nell Cropsey house on Riverside Avenue. For a second straight year, organizers have canceled Ghost Walk because of COVID-19 concerns.

Residents looking forward to this year’s Elizabeth City Ghost Walk will have to wait till next year to learn more about the unsolved death of Nell Cropsey.

For a second straight year, the Elizabeth City Historic Neighborhood Association has had to cancel its popular Ghost Walk because of COVID-19, said ECHNA member Marjorie Berry.

“COVID is big question mark for us with the (case) numbers rising,” said Berry, who is known for writing the scripts for each year’s cast of ghosts, who are played by local volunteers. This year’s Ghost Walk had been scheduled for the final weekend in October.

Because of the unpredictable nature of COVID-19 and rising case numbers, the association decided early to cancel Ghost Walk.

“We have to do things ahead of time” such as purchase promotional materials and have tickets made, Berry said. Those could have led to a significant loss of revenue if the association had to cancel at the last second, she said.

“We just decided to scrap it and start fresh next year,” she said.

Each year the walk includes stops at homes of popular figures throughout Elizabeth City’s history, where their “ghosts” give presentations.

This year’s Ghost Walk theme was the mysterious death of Nell Cropsey, a 19-year-old girl who disappeared from her family’s front porch on the late evening of Nov. 20, 1901. This year’s event was supposed to feature a stop at the Cropsey House on Riverside Avenue, with a porch-side visit from the “ghosts” of Cropsey’s parents.

Cropsey’s unsolved death remains a mystery, one of which has been featured in several books and on the Travel Channel. Berry said Nell Cropsey will be the focus of next year’s Ghost Walk.

This year’s walk would have marked the 25th anniversary of the event, as well as Berry’s 17th year being involved in organizing it. Until last year, the association had never had to cancel Ghost Walk. This year also marks 120 years since Cropsey’s death.

Museum of the Albemarle will host a Nell Cropsey exhibit starting Oct. 1, Berry said. The exhibit was to coincide with the Ghost Walk.

Crawford Township Volunteer Fire Department firefighter Kenneth Schlegel (left) and Capt. Jay Cirillo prepare to lay a wreath at the base of a U.S. flag pole during the Patriot Day Celebration and 20th anniversary memorial of the Sept. 11, 2001, attacks at the Sam A. Twiford Veteran’s Park in Elizabeth City, Saturday.

Walter “Kirk” Harris, a former special assistant in the Office of the Under Secretary of Defense during the Trump administration, gives the keynote address at Saturday’s Patriot Day Celebration at Sam A. Twiford Veteran’s Park in Elizabeth City.

An unidentified girl participates as children lead the audience in reciting the Pledge of Allegiance during a 20th anniversary 9/11 memorial service held at Sam A. Twiford Veteran’s Park in Elizabeth City, Saturday.

Elizabeth City Fire Chief Chris Carver salutes a flag dedicated to the firefighters who died on Sept. 11, 2001, while responding to the terrorist attacks of that day, during a 20th anniversary 9/11 memorial held at Sam A. Twiford Veteran’s Park in Elizabeth City, Saturday.

A former U.S. Department of Defense official recalled on Saturday his own experiences on Sept. 11, 2001 as well as his meeting with the families of Flight 93 victims prior to President Donald Trump’s 2018 visit to the Flight 93 National Memorial.

Walter “Kirk” Harris, a former special assistant under the Office of the Under Secretary of Defense during the Trump Administration, gave the keynote address at this year’s Patriot Day Celebration on Saturday. The celebration and 20th anniversary memorial commemorating the attacks of 9/11 was hosted by Twiford Funeral Home at Sam A. Twiford Veteran’s Park in Elizabeth City.

Harris discussed his experience as a member of an advance team preparing for Trump’s 2018 visit to the Flight 93 National Memorial outside Shanksville, Pennsylvania.

Part of Harris’ job at the Pentagon included serving as a lead advance team representative for the vice president and president, he told approximately 100 residents who attended Saturday’s ceremony. Whenever the vice president or the president travel, the advance team arrives about a week ahead to ensure communications, security and other necessary functions are established before their arrival.

Harris said when he first arrived in Shanksville, he was met by family members of Todd Beamer and other victims killed in the plane crash. Beamer is remembered as the United Airlines Flight 93 passenger overheard during a recorded phone message as saying “Let’s roll” before he and other passengers launched an assault on the hijackers who had taken over the plane.

“After meeting Todd Beamer’s brother, I was taken back,” Harris said. “We all sat down in the conference room, listened to the family talk and (heard) stories of their family.”

Harris also played aloud for Saturday’s 9/11 ceremony attendees a few of the recordings of phone calls passengers and crew of Flight 93 managed to make to loved ones in their final moments.

Flight 93 crashed in a field in Somerset County, Pennsylvania, at approximately 10:03 a.m. The plane had taken off from Newark, N.J. and was fully fueled and bound for San Francisco. As the four hijackers took control of the plane, they moved the passengers to the rear and made them sit down. The terrorists then turned the plane around and began heading east, presumably toward Washington D.C.

Thirteen passengers and crew members managed to use the onboard passenger phones in the seat rests to call loved ones, according to Flight 93 National Memorial website.

During these phone calls, the passengers learned of the earlier attacks on the World Trade Center. Shortly before 10 a.m., Beamer and other members of the group initiated their assault on the cockpit. The hijackers responded by rolling the plane left and right to try to quell the uprising. The website states that according to the 9/11 Commission’s findings, the terrorists decided to crash the plane rather than allow the passengers to gain control.

All 40 people aboard the plane, including the hijackers, perished in the crash. Recordings of several of the phone calls made from Flight 93 in its final moments can be heard at the memorial’s website.

Harris said the remains of the Flight 93 aircraft are buried in 18 trailers in unmarked locations in a hillside near the memorial.

“Only the families know where there at,” he said of the trailers’ exact locations.

Earlier in his remarks, Harris described the moment he first learned of the 9/11 attacks.

On the morning of Sept. 11, 2001, he was watching the children’s TV show “Barney & Friends” with his 2-year-daughter, he said. His daughter got distracted from the show, so he decided to switch the channel to the news.

“I flipped on CNN, he said. “Back then that was kind of our only choice for a news outlet.”

It wasn’t soon after he turned to the news, he realized the United States was under attack.

“Then I saw the second plane hit the tower,” he said. “To be honest with you, I was in absolute shock. My gut just dropped. My heart just exploded.”

He described the scene around the Washington-metro area over the next following weeks as “fortified like a warzone.”

“There were combat patrols flying day and night over our house,” he said. “In front of the Pentagon, there were surface-to-air missile batteries right on Route 110.”

He said he never thought in his “wildest dreams” he’d see a sight like that in the United States.

Blue skies and sunshine greeted the roughly 100 residents in attendance Saturday. In addition to Harris, several other guests were in attendance, including law and fire officials from surrounding counties, and local favorite Out ‘N the Cold performed “God Bless the U.S.”

Introducing Harris was Gene Overstreet, the 12th sergeant major of the U.S. Marine Corps. Overstreet, who is retired, gave the keynote address at the 2019 Patriot Day Celebration.

A U.S. Coast Guard MH-60 helicopter flew overhead as the service got underway.

Laying a special wreath at the base of the U.S. flag staff were Capt. Jay Cirillo, of the Crawford Township Volunteer Fire Department, and Crawford fireman Kenneth Schlegel.

Cirillo also brought his horse, who was dressed out in red, white and blue patriotic theme. According to Cirillo, the horse was born on Sept. 11, 2001. Noting the significance of the timing, he said he was unsure what to name the horse. Then it dawned on him: Why not name the male horse in honor of the 343 New York firefighters and first responders who lost their lives on 9/11? He decided to name the horse, FDNY (pronounced Fidney).

The percentage of students meeting the University of North Carolina system’s benchmark on the ACT college readiness exam for 2020-21 was at or below the state average at five area high schools.

The Sept. 1 data report from the N.C. Department of Public Instruction includes performance outcomes on the ACT college readiness exam administered to all 11th-graders statewide.

On the ACT, for which the University of North Carolina system sets a composite score of 17 as its minimum admission requirement, the percentage of students statewide achieving the composite declined slightly — from 55.8 percent in 2018-19 to 55.2 percent in 2020-21.

Students at Camden County High School were the only non-early college students to score above the state average: 60.1 percent.

Students at all three early college high schools in the area reported percentages well above the state average. Elizabeth City-Pasquotank Early College reported 69.7 percent of students met the composite score on the ACT. The percentages at Camden Early College and J.P. Knapp Early College were even higher — 81.6 percent and 88.1 percent, respectively.

“Students also had the option to choose remote instruction and approximately 40 percent of our high school students were virtual,” Maddox continued. “The combination of remote instruction and limited in-person learning severely hampered the amount of ACT prep time that could be effectively given to students.”

Amy Spencer, chief academic officer for Elizabeth City-Pasquotank Public Schools, noted that while ECPPS had a percentage below the state rate, the local district also saw improvement over previous years.

”The average ECPPS ACT student composite score was higher than the previous five years,” Spencer said. “The scores still fell slightly below the state average (less than one point). Each subject area saw an increase from the previous year while the state subject areas saw a decrease.”

CURRITUCK — A Currituck County man has been sentenced to more than 200 years in prison after a jury found him guilty last week of 44 counts of child sex offenses, including 2nd degree forcible rape.

Kevin Marcell Scarboro, whose last known address was the 130 block of Elizabeth Circle, Moyock, was also found guilty of sexual acts by a substitute parent, statutory rape of a child by an adult, statutory sexual offense with a child and indecent liberties with a child, District Attorney Andrew Womble said.

Superior Court Judge Wayland Sermons sentenced Scarboro to a minimum of 208 years, and a maximum of 360 years, confinement with the N.C. Department of Corrections, Womble said.

Scarboro was 38 and working as a civilian contractor for the U.S. Navy in Norfolk at the time of his arrest on Dec. 3, 2019, according to county records. He was ordered held in lieu of a $2 million secured bond. A day earlier, Scarboro had been indicted by a Currituck County grand jury.

Following Scarboro’s arrest, Chief Deputy Jeff Walker of the Currituck Sheriff’s Office said the alleged victims were Scarboro’s three step-daughters, who at the time were between the ages of 12-16.

Walker said the sheriff’s department opened its investigation after the oldest step-daughter told a friend at school about what had happened to her.