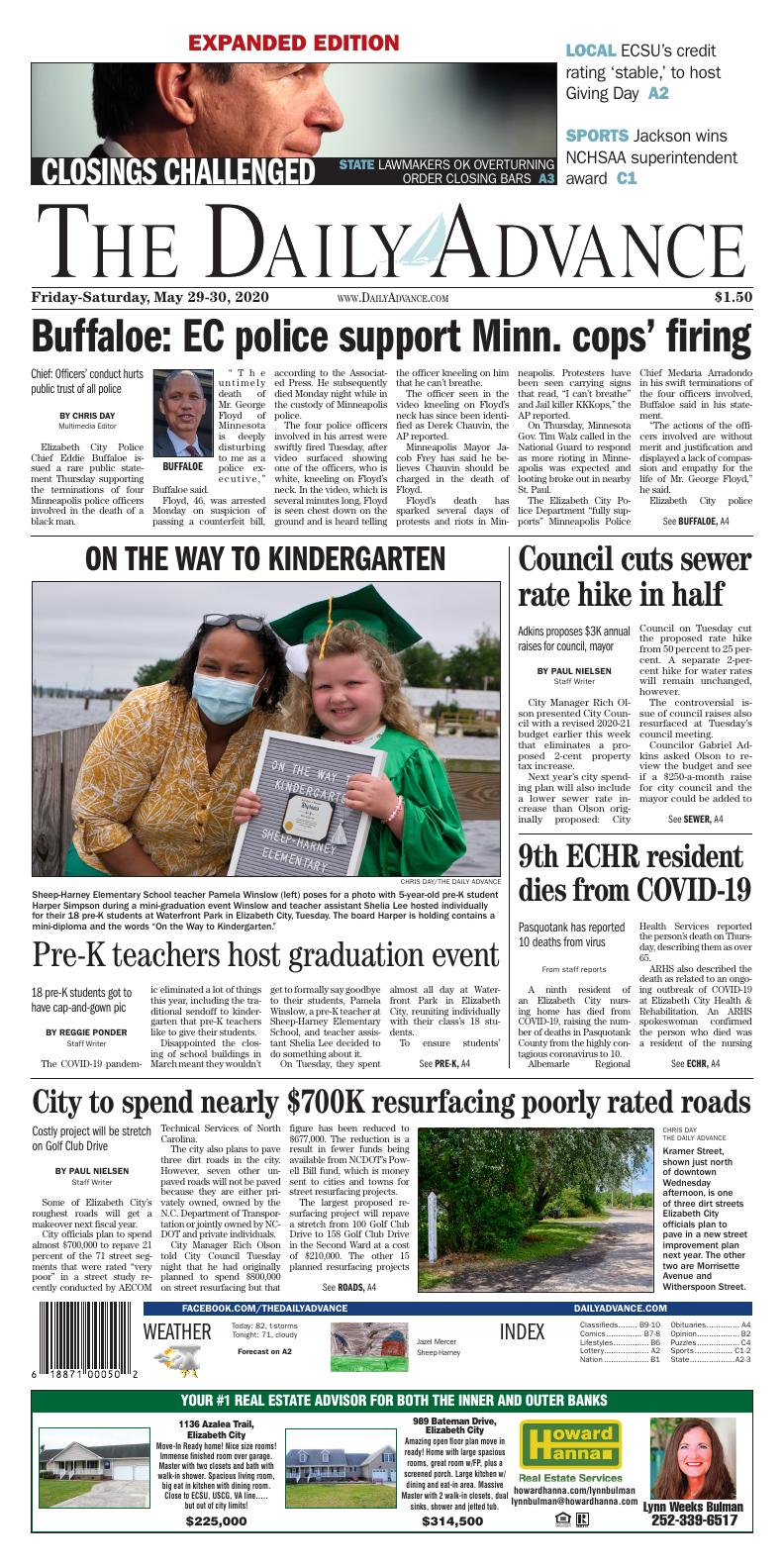 “The untimely death of Mr. George Floyd of Minnesota is deeply disturbing to me as a police executive,” Buffaloe said.

Floyd, 46, was arrested Monday on suspicion of passing a counterfeit bill, according to the Associated Press. He subsequently died Monday night while in the custody of Minneapolis police.

The four police officers involved in his arrest were swiftly fired Tuesday, after video surfaced showing one of the officers, who is white, kneeling on Floyd’s neck. In the video, which is several minutes long, Floyd is seen chest down on the ground and is heard telling the officer kneeling on him that he can’t breathe.

The officer seen in the video kneeling on Floyd’s neck has since been identified as Derek Chauvin, the AP reported.

Minneapolis Mayor Jacob Frey has said he believes Chauvin should be charged in the death of Floyd.

Floyd’s death has sparked several days of protests and riots in Minneapolis. Protesters have been seen carrying signs that read, “I can’t breathe” and Jail killer KKKops,” the AP reported.

On Thursday, Minnesota Gov. Tim Walz called in the National Guard to respond as more rioting in Minneapolis was expected and looting broke out in nearby St. Paul.

“The actions of the officers involved are without merit and justification and displayed a lack of compassion and empathy for the life of Mr. George Floyd,” he said.

“This is yet another incident where unacceptable police behavior has ruptured the fabric of public trust by law enforcement actions,” the chief said.

Law enforcement officers must adhere to a “standard of fair treatment, dignity and respect” toward others in the course of their work, Buffaloe said.

Buffaloe also said he is encouraged with how quickly the FBI and Minnesota Bureau of Criminal Apprehension opened an investigation of the incident.

“Any lack of transparency and accountability will continue to erode community trust and further raise suspicion and resentment,” he said. “In order to restore legitimacy, we must hold officers accountable at all times for their actions when they deviate from that standard.”

Sheep-Harney Elementary School teacher Pamela Winslow (left) poses for a photo with 5-year-old pre-K student Harper Simpson during a mini-graduation event Winslow and teacher assistant Shelia Lee hosted individually for their 18 pre-K students at Waterfront Park in Elizabeth City, Tuesday, May 26. The board Harper is holding contains a mini-diploma and the words “On the Way to Kindergarten.”

The COVID-19 pandemic eliminated a lot of things this year, including the traditional sendoff to kindergarten that pre-K teachers like to give their students.

Disappointed the closing of school buildings in March meant they wouldn’t get to formally say goodbye to their students, Pamela Winslow, a pre-K teacher at Sheep-Harney Elementary School, and teacher assistant Shelia Lee decided to do something about it.

On Tuesday, they spent almost all day at Waterfront Park in Elizabeth City, reuniting individually with their class’s 18 students.

To ensure students’ safety because of the pandemic, each student was given a scheduled appointment to meet with Winslow and Lee at the park and both teachers wore a facemask.

Besides getting a photo taken in their cap and gown, each pre-K student was presented a bag containing Hershey’s kisses and a single penny. Included was the following message: “I packed these hugs and kisses because I’ll miss you ... and a penny for good luck when the school year is new.”

Students also had an opportunity to get a juice box and an individually wrapped snack cake. Their parents were also handed a photo taken on the child’s first day of school.

One of the students who came by for the waterfront ceremony was Harper Simpson, 5.

“Harper has really missed y’all,” her mother, Jennifer Simpson, said to Winslow and Lee. “Y’all have done such a good job for all of them.”

Simpson said she appreciated the opportunity for her daughter to see her teachers again.

Simpson said she appreciates all that teachers have done to communicate with students and parents during the pandemic.

“She loved it,” she said. “It has been a great experience for her.”

Harper will be enrolling in kindergarten at Pasquotank Elementary School this fall.

Her father, Josh Simpson, said pre-K has helped her be ready for kindergarten.

“They have done a lot,” he said. “Mrs. Winslow and Mrs. Lee have been great.”

Harper agreed with her dad, saying she’s ready for kindergarten and is looking forward to it.

Josh Simpson said he also appreciated the waterfront mini-ceremony that Winslow and Simpson put together for students.

“I’m sorry this was all we could do,” Winslow told Harper and her parents.

“I appreciate it,” Jennifer Simpson assured her.

Lee said it was great to see the kids again.

“That’s the most important thing because we miss these little babies,” she said.

Kramer Street, shown just north of downtown Wednesday afternoon, is one of three dirt streets Elizabeth City officials plan to pave in a new street improvement plan next year. The other two are Morrisette Avenue and Witherspoon Street.

Some of Elizabeth City’s roughest roads will get a makeover next fiscal year.

City officials plan to spend almost $700,000 to repave 21 percent of the 71 street segments that were rated “very poor” in a street study recently conducted by AECOM Technical Services of North Carolina.

The city also plans to pave three dirt roads in the city. However, seven other unpaved roads will not be paved because they are either privately owned, owned by the N.C. Department of Transportation or jointly owned by NCDOT and private individuals.

City Manager Rich Olson told City Council Tuesday night that he had originally planned to spend $800,000 on street resurfacing but that figure has been reduced to $677,000. The reduction is a result in fewer funds being available from NCDOT’s Powell Bill fund, which is money sent to cities and towns for street resurfacing projects.

Seven of the 16 projects are in the Second Ward while four each are in the Third and Fourth wards. There is just one project in the First Ward. Future utility work — water, sewer and stormwater — affects which streets are selected for resurfacing.

Additional streets could be added to the repaving list once the city gets price estimates from asphalt contractors. Those projects would address streets that are also in the study’s “very poor” category.

“What we are proposing here is just shy of $650,000” in projects, said Elizabeth City Public Utilities Director Amanda Boone. “This is not the entire street list but just the top part of what we think we might able to get done.”

The city also plans to pave dirt roads at Kramer Street, Morrisette Avenue and Witherspoon Street. The cost of paving the three roads is estimated to cost $41,000 with Kramer costing approximately $32,000.

Paving the seven dirt roads that are privately owned or owned by NCDOT would cost approximately $141,000. State law, however, prohibits the city from spending public funds to pave private roads.

The city, as it has done in the past, could ask NCDOT to pave its dirt roads in Elizabeth City and then turn them over to the city for future maintenance. But that seems unlikely since NCDOT is facing a massive revenue shortfall because of the COVID-19 pandemic.

Olson said the city could partner with the owners of the privately-owned unpaved streets to get those roads paved.

If that were to occur, the city would then accept future maintenance on those streets.

Next year’s city spending plan will also include a lower sewer rate increase than Olson originally proposed: City Council on Tuesday cut the proposed rate hike from 50 percent to 25 percent. A separate 2-percent hike for water rates will remain unchanged, however.

Councilor Gabriel Adkins asked Olson to review the budget and see if a $250-a-month raise for city council and the mayor could be added to the $69 million city budget without resulting in a property tax increase.

In March, council voted 4-2 to have Olson add $500-a-month raises to the 2020-21 fiscal budget. Adkins joined Councilors Darius Horton, Johnnie Walton and Michael Brooks in voting for the raises. Councilors Billy Caudle and Jeannie Young voted against the raises, while Councilors Chris Ruffieux and Kem Spence missed the vote.

Last week on a 4-2 vote, City Council reversed itself, removing the raises from the proposed budget. Caudle, Young, Ruffieux and Spence voted to remove the raises, while Walton and Brooks voted to keep them. This time, Horton and Adkins were absent from the vote.

Asked Wednesday about Adkins’ request to add $3,000-a-year raises for council and the mayor without a tax increase, Olson said, “We can’t seem to make that work.”

The original 50-percent sewer rate increase Olson proposed would have been followed with recommended future 3-percent raises each of the next eight years and a 9-percent increase in 2028-29.

The revenue raised by the increases would be used to fund $37 million in needed improvements over the next 10 years in the water and sewer systems that have been recommended by outside consultant Raftelis.

At council’s requst, Olson was scheduled to provide different sewer rate increase options at Tuesday’s meeting. One option included a 35-percent rate increase instead of a 50-percent one. But before Olson could present the 35-percent option, Walton motioned to reduce the increase from 50 percent to 25 percent.

Walton was joined by Adkins, Horton, Brooks and Spence in voting for a 25-percent sewer rate increase. Caudle, Young and Ruffieux voted against the motion.

“Fifty-percent raise is big,” Walton said in proposing the 25-percent increase instead. “We don’t know how these people are going to come out of the pandemic. People don’t have jobs. We don’t need to put all of that on them at one time.’’

Young, however, said the city needs to start fixing problems with its wastewater and water systems now. She said she was willing to agree to a 35-percent increase next year.

“I want to make sure the people do understand that the position we as councilors are in,” Young said. “The 50-percent (increase) is scary when people look at it with everything that is happening. But then we look at what we have to fix and that is scary as well. We have to do something with the sewer rates because we are sticking out fingers in all these little holes. All those holes are going to break eventually.”

With the new proposed rates, a typical customer that uses 3,500 gallons a month would see their water and sewer rates rise from approximately $62 a month to around $69 monthly.

Future rate hikes will have to be voted on by council in subsequent fiscal years to raise the $37 million recommended but Olson said he is still waiting on those figures from Raftelis.

Council is scheduled to finish budget discussions at its June 8 meeting but a work session could be called before then.

A ninth resident of an Elizabeth City nursing home has died from COVID-19, raising the number of deaths in Pasquotank County from the highly contagious coronavirus to 10.

Albemarle Regional Health Services reported the person’s death on Thursday, describing them as over 65.

ARHS also described the death as related to an ongoing outbreak of COVID-19 at Elizabeth City Health & Rehabilitation. An ARHS spokeswoman confirmed the person who died was a resident of the nursing home.

So far, 61 positive cases of COVID-19 have been reported at Elizabeth City Health & Rehabilitation. Nineteen of those involve staff members; the other 42 involve residents.

Regionwide, only 98 of the 371 lab-confirmed cases of COVID-19 remained active on Thursday. That’s about 26 percent.

Seventy-one percent of all COVID-19 deaths in the state have been in so-called “congregate housing” settings, which include nursing homes, assisted living homes and state prison facilities. Sixty-six percent — 544 — of those deaths have been reported at nursing homes.

The number of persons hospitalized with COVID-19 on Thursday increased by six to 708, while the number of completed COVID-19 tests rose to 375,192, an increase of more than 10,900 from Wednesday. 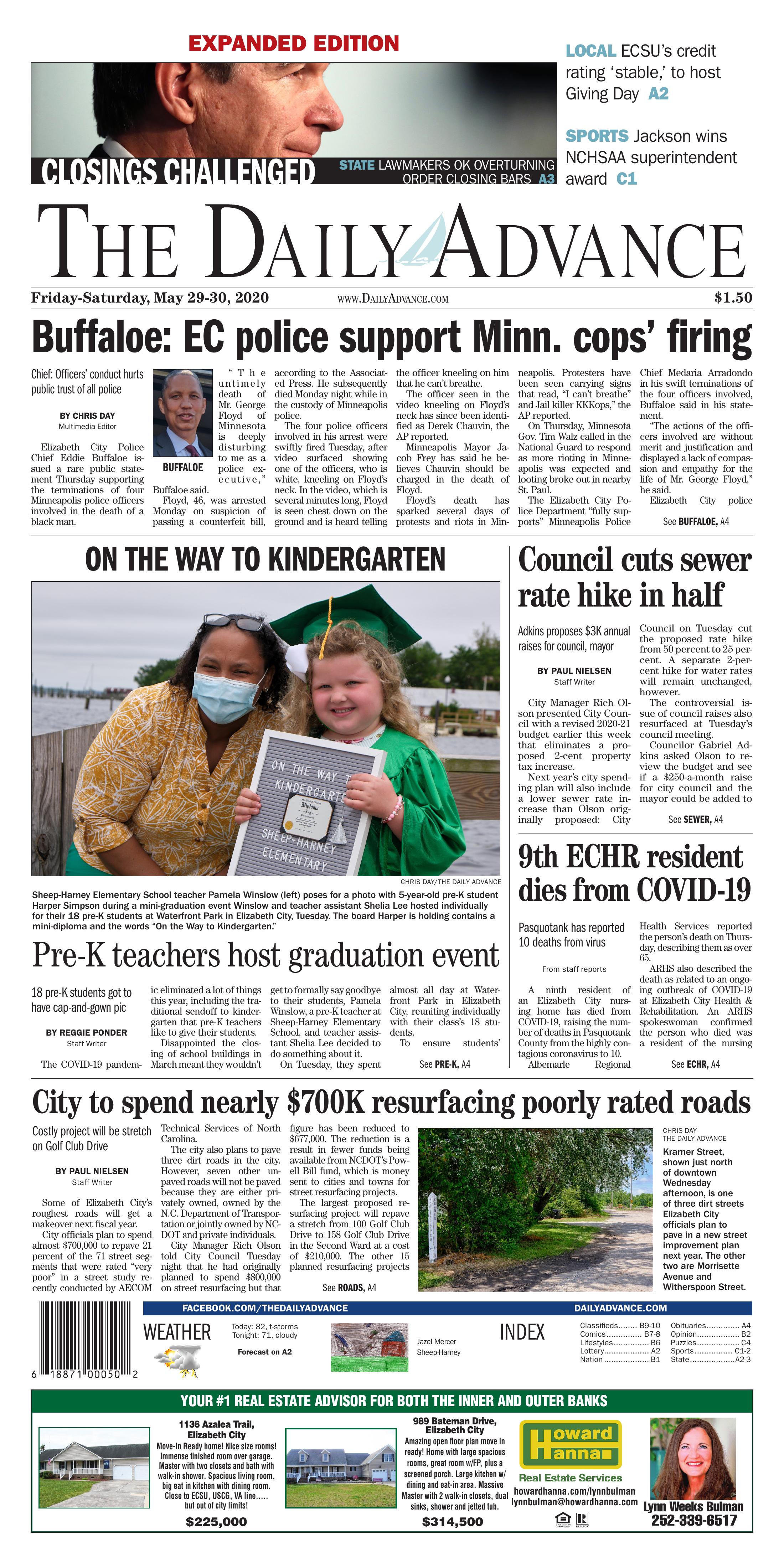