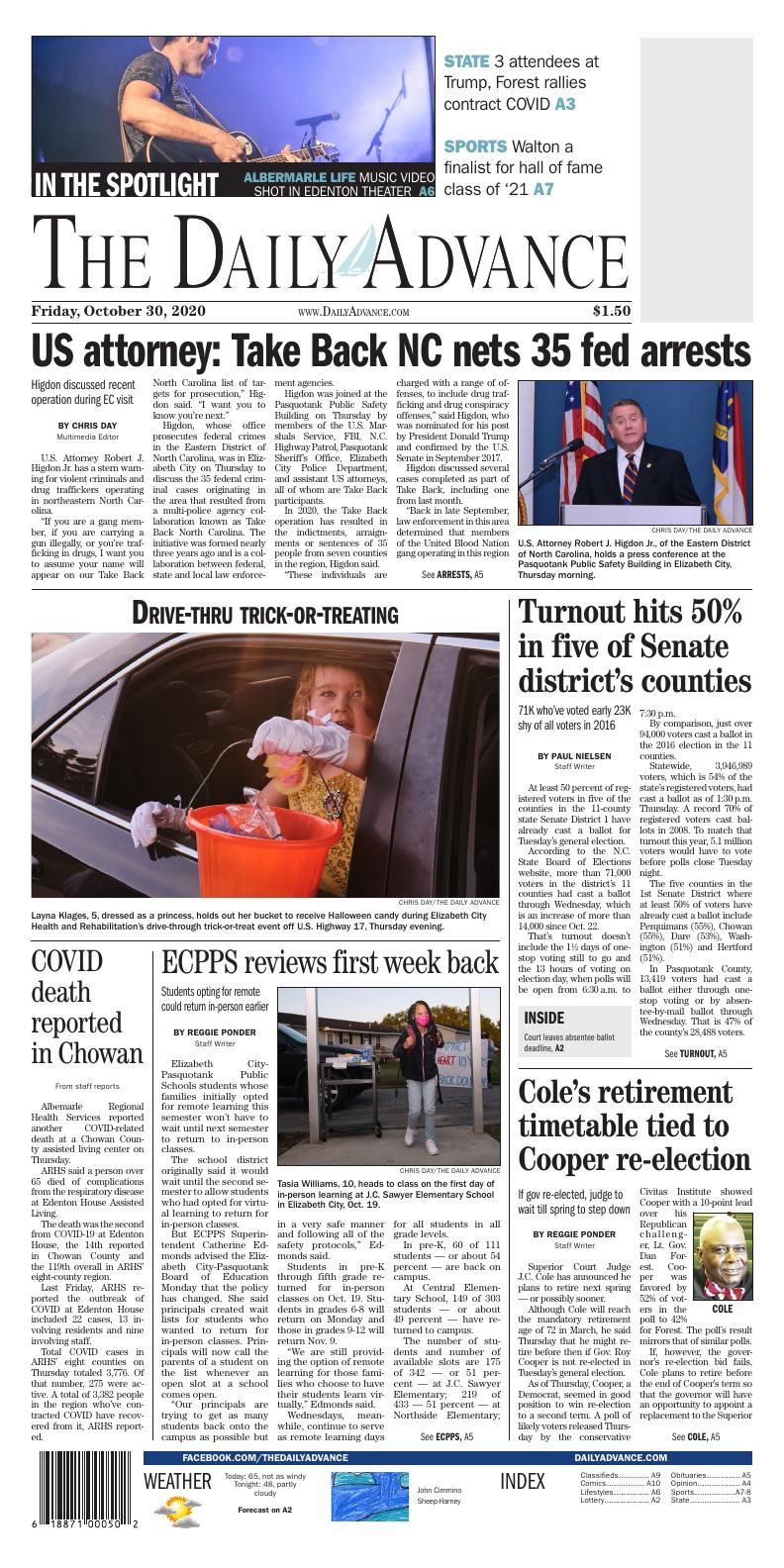 “If you are a gang member, if you are carrying a gun illegally, or you’re trafficking in drugs, I want you to assume your name will appear on our Take Back North Carolina list of targets for prosecution,” Higdon said. “I want you to know you’re next.”

Higdon, whose office prosecutes federal crimes in the Eastern District of North Carolina, was in Elizabeth City on Thursday to discuss the 35 federal criminal cases originating in the area that resulted from a multi-police agency collaboration known as Take Back North Carolina. The initiative was formed nearly three years ago and is a collaboration between federal, state and local law enforcement agencies.

Higdon was joined at the Pasquotank Public Safety Building on Thursday by members of the U.S. Marshals Service, FBI, N.C. Highway Patrol, Pasquotank Sheriff’s Office, Elizabeth City Police Department, and assistant US attorneys, all of whom are Take Back participants.

In 2020, the Take Back operation has resulted in the indictments, arraignments or sentences of 35 people from seven counties in the region, Higdon said.

“These individuals are charged with a range of offenses, to include drug trafficking and drug conspiracy offenses,” said Higdon, who was nominated for his post by President Donald Trump and confirmed by the U.S. Senate in September 2017.

Higdon discussed several cases completed as part of Take Back, including one from last month.

“Back in late September, law enforcement in this area determined that members of the United Blood Nation gang operating in this region were likely responsible for a number of shootings, all in one weekend,” Higdon said.

Police suspected a gang turf war, and with the assistance of federal resources successfully obtained arrest warrants for three suspects believed to be involved in the shootings. According to Higdon, those three suspects are Jaquan D. Lamb, Jaylen N. Spivey and Quayshaun L. Banks. The ages of the individuals were not provided.

“Since their arrests, each of these individuals has been indicted, some with additional charges by a federal grand jury sitting in this district,” said Higdon, who added each also has prior convictions.

“When you add on top of that their established connection to the United Blood Nation and the concern of law enforcement and members of the community, regarding the increased violence surrounding this gang, you have exactly the situation our Take Back North Carolina initiative and federal prosecutions were designed to address.”

According to Elizabeth City police, the three shootings were not the same three reported the weekend of Saturday and Sunday, Aug. 22-23, that resulted in three deaths.

Another arrest resulted in January when Elizabeth City police discovered a box of ammunition in the bedroom of a 15-year-old boy who had been shot and later died at the hospital. Evidence collected by police led them to a male named Tremayne Harris, whose age was not provided.

“The ammunition was traced to a local pawn shop and the receipt and video surveillance revealed Tremayne Harris had purchased the ammunition,” Higdon said.

According to the U.S. Attorney’s Office, Harris is scheduled to be sentenced in March. In an online inmate search, there was no one under that name listed in custody at Albemarle District Jail.

As US attorney, Higdon has experience prosecuting gang members. In April, his office issued a news release stating that Demetrice R. Devine, 37, of Garner, was sentenced in federal court to four consecutive life terms, plus 240 months imprisonment for several convictions. The charges against Devine included conspiracy to participate in a pattern of racketeering, murder in aid of racketeering and murder with a firearm. According to the news release, Devine was known as a “godfather” or leader in the United Blood Nation.

Higdon provided an overview of the origins of the Tack Back North Carolina campaign. The initiative was the result of a reorganization and refocusing of efforts to stem the tide of violent crimes and drug trafficking in the region.

The operation involved assigning federal prosecutors to work alongside local district attorneys and law enforcement agencies to identify the offenders most responsible for spurring violent crimes and drug problems, Higdon explained. The goal was to build strong federal cases against the “worst of the worst” offenders to prosecute, he said.

Pasquotank Sheriff Tommy Wooten praised the Take Back campaign as a “step in the right direction” for the region.

“Today, law enforcement and our U.S. Attorney’s Office without a doubt made our streets and surrounding communities safer,” said the sheriff, who also issued a warning to criminals:

“Let this be a warning that this sheriff’s office, and the other surrounding agencies, are coming for you,” he said.

“Elizabeth City Police Department is very grateful for having a strong partnership with the United States Attorney’s Office,” he said.

Through that partnership, the ECPD remains committed to a proactive, intelligence-driven policing effort to curtail crime, the chief said.

Buffaloe also announced that his department has received funding from the U.S. Department of Justice that will be used to purchase equipment to help it with surveillance and investigations. 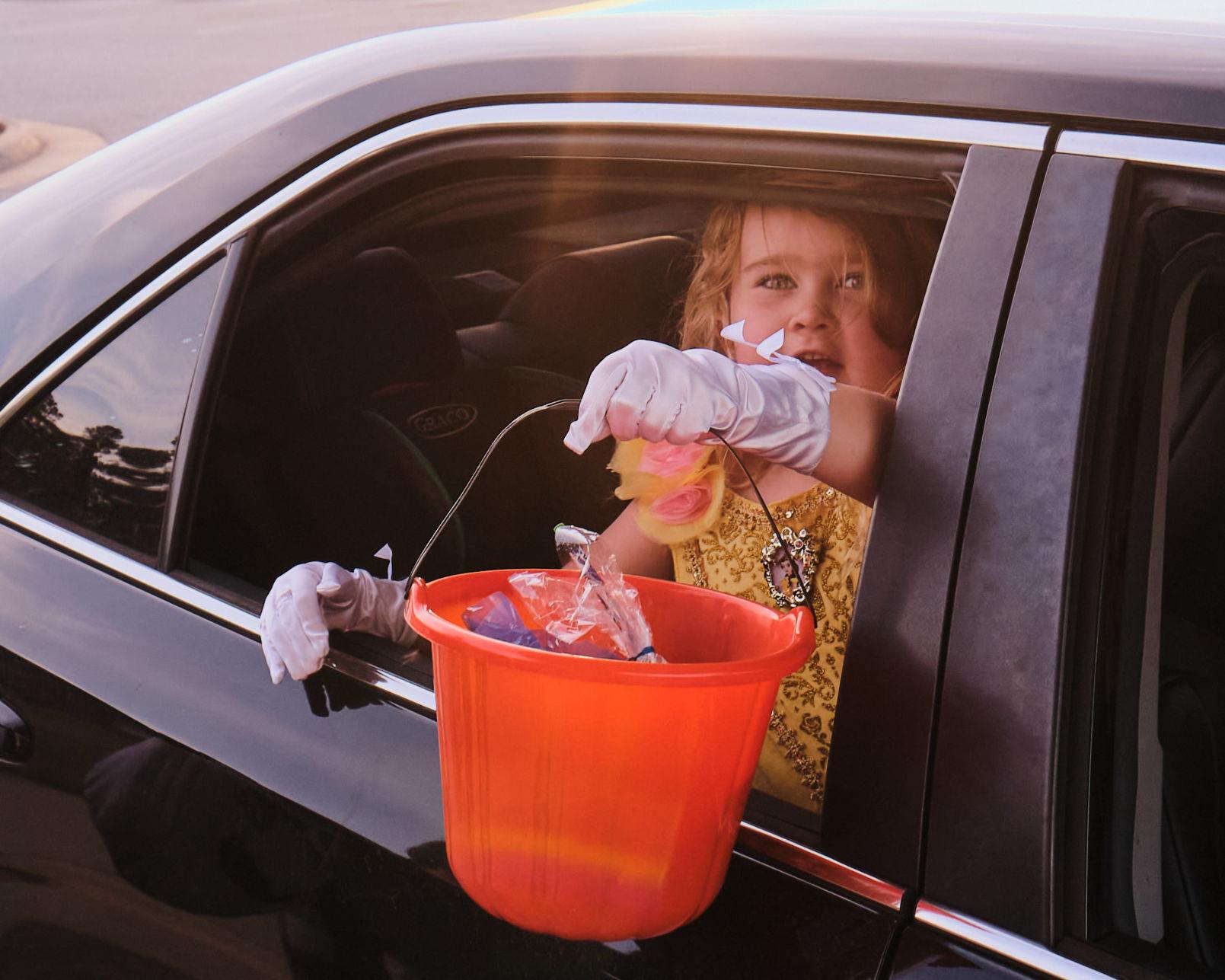 Elizabeth City-Pasquotank Public Schools students whose families initially opted for remote learning this semester won’t have to wait until next semester to return to in-person classes.

The school district originally said it would wait until the second semester to allow students who had opted for virtual learning to return for in-person classes.

But ECPPS Superintendent Catherine Edmonds advised the Elizabeth City-Pasquotank Board of Education Monday that the policy has changed. She said principals created wait lists for students who wanted to return for in-person classes. Principals will now call the parents of a student on the list whenever an open slot at a school comes open.

“Our principals are trying to get as many students back onto the campus as possible but in a very safe manner and following all of the safety protocols,” Edmonds said.

“We are still providing the option of remote learning for those families who choose to have their students learn virtually,” Edmonds said.

Wednesdays, meanwhile, continue to serve as remote learning days for all students in all grade levels.

At Central Elementary School, 149 of 303 students — or about 49 percent — have returned to campus.

All staff are complying with a directive to wear facemasks but officials are taking measures to ensure all staff are wearing their masks properly, Edmonds said.

Teaching some students in the classroom and others online remains a challenge, Edmonds said. “Our teachers are working though this,” she said.

Middle school principals are visiting elementary school campuses to learn from those schools’ principals about bringing students back to campus, Edmonds said.

River Road Middle School has 32 slots available in the sixth grade and seven in the eighth grade. The seventh grade at RRMS has 78 students who want to return for in-person classes but only 72 spaces available.

“They are trying to work through that to see if they can make some accommodations,” Edmonds said. “I think they will probably be able to work that out but we have to see what that will look like.”

Antoinette Reid, ECPPS director of student services, told the board about what the district is doing when it comes to “social and emotional learning.”

Parents have been struggling with providing their children the education they deserve, Reid said. Part of strengthening the social and emotional well-being of students is supporting their families, according to Reid.

The school conducted “trauma-informed” training for staff. Teachers are required to complete at least one lesson a week related to social and emotional learning, Moore said, but some do it every day.

On the transportation front, the district is using 29 regular buses and five exceptional children buses. There have been no double runs and the average route time is 45 minutes to one hour, according to ECPPS Transportation Director Amanda Hill.

At least 50 percent of registered voters in five of the counties in the 11-county state Senate District 1 have already cast a ballot for Tuesday’s general election.

According to the N.C. State Board of Elections website, more than 71,000 voters in the district’s 11 counties had cast a ballot through Wednesday, which is an increase of more than 14,000 since Oct. 22.

Statewide, 3,946,989 voters, which is 54% of the state’s registered voters, had cast a ballot as of 1:30 p.m. Thursday. A record 70% of registered voters cast ballots in 2008. To match that turnout this year, 5.1 million voters would have to vote before polls close Tuesday night.

In Pasquotank County, 13,419 voters had cast a ballot either through one-stop voting or by absentee-by-mail ballot through Wednesday. That is 47% of the county’s 28,488 voters.

Camden County voters have cast 3,720 ballots, which is 45 percent of the county’s 8,125 registered voters.

Currituck County had the second-lowest percentage of voter turnout in District 1 with 8,067 of the county’s 21,774 voters casting a ballot through Wednesday.

Early voting picked up on Thursday, however. Elections Director Syndi Banks reported that as of 1:30 p.m., 9,506 voters had cast ballots, boosting turnout to 43% of registered voters. 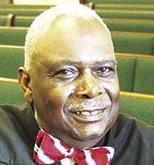 Superior Court Judge J.C. Cole has announced he plans to retire next spring — or possibly sooner.

Although Cole will reach the mandatory retirement age of 72 in March, he said Thursday that he might retire before then if Gov. Roy Cooper is not re-elected in Tuesday’s general election.

As of Thursday, Cooper, a Democrat, seemed in good position to win re-election to a second term. A poll of likely voters released Thursday by the conservative Civitas Institute showed Cooper with a 10-point lead over his Republican challenger, Lt. Gov. Dan Forest. Cooper was favored by 52% of voters in the poll to 42% for Forest. The poll’s result mirrors that of similar polls.

If, however, the governor’s re-election bid fails, Cole plans to retire before the end of Cooper’s term so that the governor will have an opportunity to appoint a replacement to the Superior Court bench, he said.

Cole said while he could make a recommendation to Cooper about the appointment, he has no plans to do that at this time.

Before that he served 15 years as a District Court judge.

The best part of serving as a judge, Cole said, has been “having an opportunity to work with young people.”

Another part of being a judge that he has appreciated, he said, is the opportunity to instruct jurors at the close of a trial.

ARHS said a person over 65 died of complications from the respiratory disease at Edenton House Assisted Living.

The death was the second from COVID-19 at Edenton House, the 14th reported in Chowan County and the 119th overall in ARHS’ eight-county region.

Total COVID cases in ARHS’ eight counties on Thursday totaled 3,776. Of that number, 275 were active. A total of 3,382 people in the region who’ve contracted COVID have recovered from it, ARHS reported. 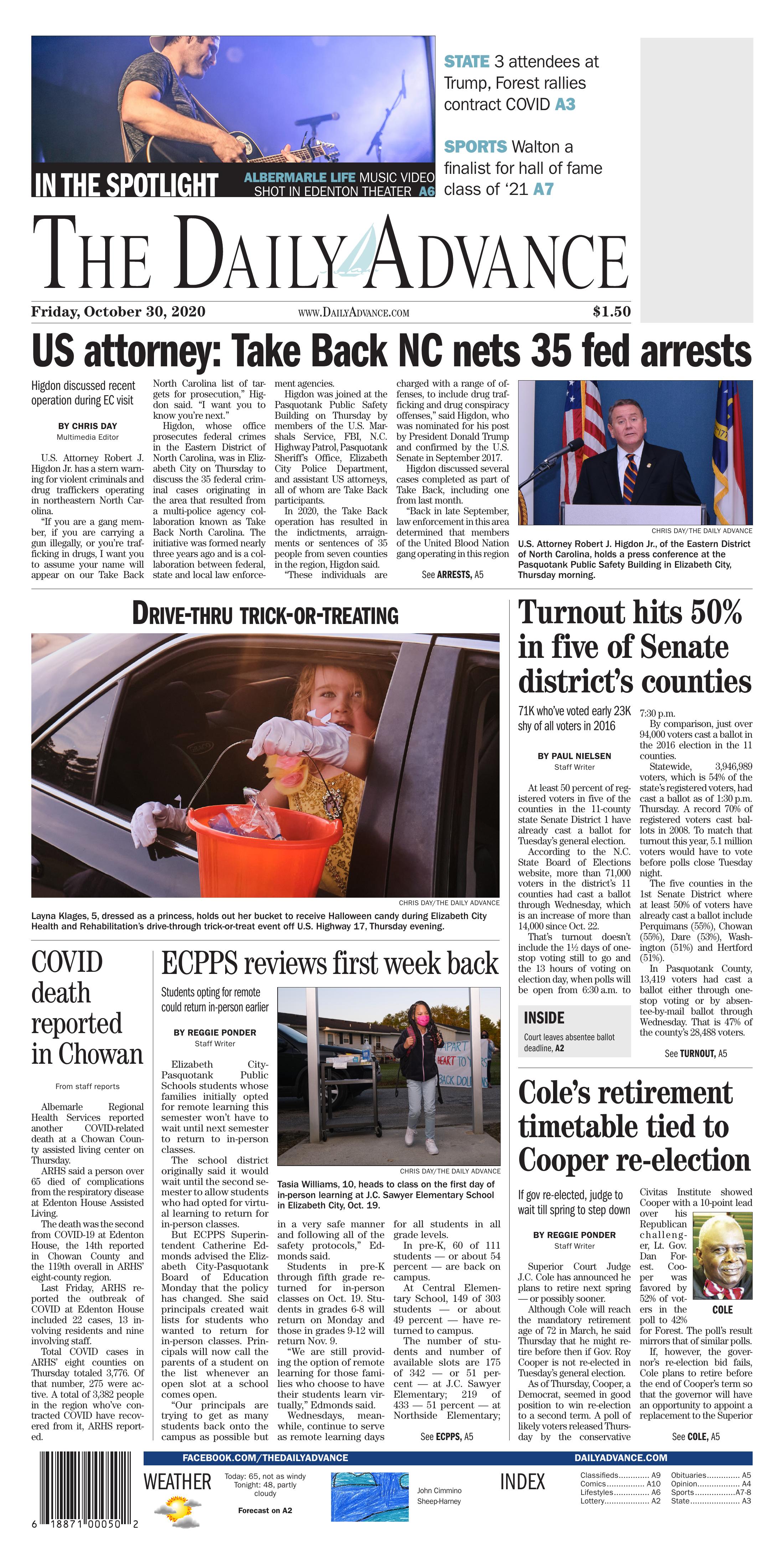