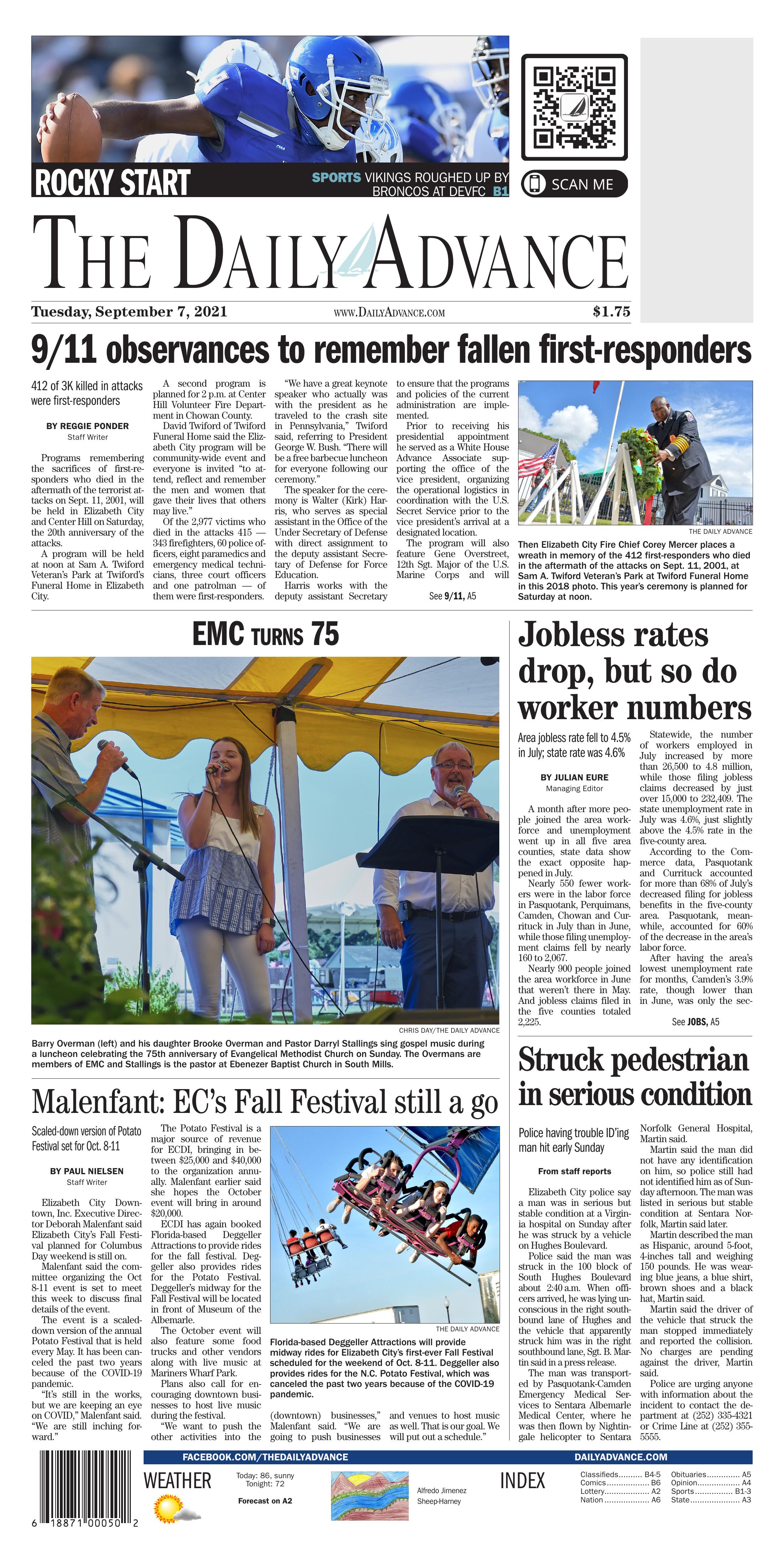 Then Elizabeth City Fire Chief Corey Mercer places a wreath in memory of the 412 first-responders who died in the aftermath of the attacks on Sept. 11, 2001, at Sam A. Twiford Veteran’s Park at Twiford Funeral Home in this 2018 photo. This year’s ceremony is planned for Saturday at noon.

Programs remembering the sacrifices of first-responders who died in the aftermath of the terrorist attacks on Sept. 11, 2001, will be held in Elizabeth City and Center Hill on Saturday, the 20th anniversary of the attacks.

A program will be held at noon at Sam A. Twiford Veteran’s Park at Twiford’s Funeral Home in Elizabeth City.

A second program is planned for 2 p.m. at Center Hill Volunteer Fire Department in Chowan County.

David Twiford of Twiford Funeral Home said the Elizabeth City program will be community-wide event and everyone is invited “to attend, reflect and remember the men and women that gave their lives that others may live.”

Of the 2,977 victims who died in the attacks 415 — 343 firefighters, 60 police officers, eight paramedics and emergency medical technicians, three court officers and one patrolman — of them were first-responders.

“We have a great keynote speaker who actually was with the president as he traveled to the crash site in Pennsylvania,” Twiford said, referring to President George W. Bush. “There will be a free barbecue luncheon for everyone following our ceremony.”

Harris works with the deputy assistant Secretary to ensure that the programs and policies of the current administration are implemented.

Prior to receiving his presidential appointment he served as a White House Advance Associate supporting the office of the vice president, organizing the operational logistics in coordination with the U.S. Secret Service prior to the vice president’s arrival at a designated location.

In addition, local band Out ‘N the Cold will perform “God Bless the U.S.A.”

Leon Evans of the Rocky Hock has lined up the remembrance program in Center Hill, which will be held at the Center Hill Volunteer Fire Department.

Evans said the fire service is in his blood and that is probably one of the reasons he has felt compelled to honor the firefighters, police officers and other first responders who died responding to the attacks on 9/11.

Debbie and Billy Hilliard of Clayton will be the speakers for the Center Hill observance. Debbie Hilliard, a Chowan County native, and her husband Billy now work as instructors with the U.S. Department of Homeland Security through Louisiana State University.

Billy Hilliard was a police officer for the University of North Carolina at Chapel Hill and Debbie Hilliard was a battalion fire chief with the town of Cary. Both are now retired. They teach online courses for students across the United States and in a number of foreign countries.

Patriotic music for the program will be performed by Margo Owens, a retired teacher in the Perquimans County Schools.

Rachel Spencer, Evans’ granddaughter, will preside at the ceremony. 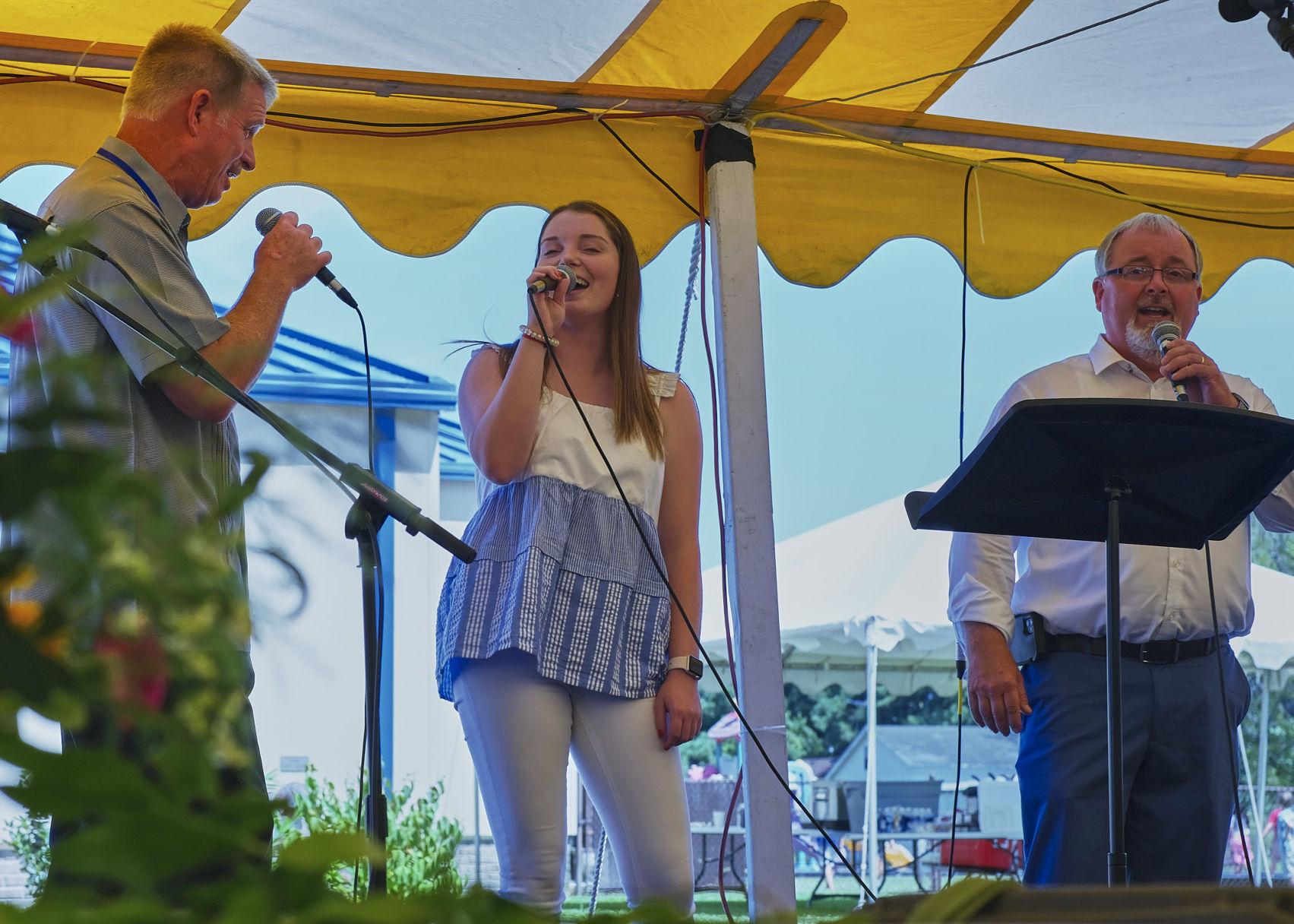 Barry Overman (left) and his daughter Brooke Overman and Pastor Darryl Stallings sing gospel music during a luncheon celebrating the 75th anniversary of Evangelical Methodist Church on Sunday. The Overmans are members of EMC and Stallings is the pastor at Ebenezer Baptist Church in South Mills.

Florida-based Deggeller Attractions will provide midway rides for Elizabeth City’s first-ever Fall Festival scheduled for the weekend of Oct. 8-11. Deggeller also provides rides for the N.C. Potato Festival, which was canceled the past two years because of the COVID-19 pandemic.

Malenfant said the committee organizing the Oct 8-11 event is set to meet this week to discuss final details of the event.

The event is a scaled-down version of the annual Potato Festival that is held every May. It has been canceled the past two years because of the COVID-19 pandemic.

“It’s still in the works, but we are keeping an eye on COVID,” Malenfant said. “We are still inching forward.”

The Potato Festival is a major source of revenue for ECDI, bringing in between $25,000 and $40,000 to the organization annually. Malenfant earlier said she hopes the October event will bring in around $20,000.

The October event will also feature some food trucks and other vendors along with live music at Mariners Wharf Park.

“We want to push the other activities into the (downtown) businesses,” Malenfant said. “We are going to push businesses and venues to host music as well. That is our goal. We will put out a schedule.”

Local
Jobless rates drop, but so do workforce numbers

A month after more people joined the area workforce and unemployment went up in all five area counties, state data show the exact opposite happened in July.

Nearly 550 fewer workers were in the labor force in Pasquotank, Perquimans, Camden, Chowan and Currituck in July than in June, while those filing unemployment claims fell by nearly 160 to 2,067.

Nearly 900 people joined the area workforce in June that weren’t there in May. And jobless claims filed in the five counties totaled 2,225.

Statewide, the number of workers employed in July increased by more than 26,500 to 4.8 million, while those filing jobless claims decreased by just over 15,000 to 232,409. The state unemployment rate in July was 4.6%, just slightly above the 4.5% rate in the five-county area.

According to the Commerce data, Pasquotank and Currituck accounted for more than 68% of July’s decreased filing for jobless benefits in the five-county area. Pasquotank, meanwhile, accounted for 60% of the decrease in the area’s labor force.

After having the area’s lowest unemployment rate for months, Camden’s 3.9% rate, though lower than in June, was only the second-lowest in the five-county area. Currituck’s rate fell .4% to an area-low 3.7%. No other area county had a rate lower than the state rate of 4.6%.

Currituck also reported the largest numerical drop in unemployment in July: 55 workers. Five-hundred twenty-six Currituck residents filed for unemployment in July compared to 581 in June. Currituck’s workforce was the only one the five counties to grow in July, increasing by 16 workers to 14,145.

Perquimans County recorded the area’s second-largest drop in joblessness by percentage: .3%, dipping to 5%. In July, 244 Perquimans residents filed jobless claims, compared to 266 in June. The county’s workforce fell by 94.

Pasquotank reported the second-largest numerical drop in unemployment in July: 53 workers. Eight-hundred fifty-two residents filed for jobless benefits in July. That compares to 905 jobless claims in June. Pasquotank’s unemployment rate dipped to 5.2%. The county’s workforce, however, fell by 325 workers to 16,468.

Elizabeth City’s July unemployment rate, which is factored into Pasquotank’s rate, dipped .3% to 4.9%.

According to the Commerce Department, unemployment rates, not seasonally adjusted, fell in 99 counties in July after rising in 99 counties in June. In addition, 70 counties — including Currituck, Camden, Chowan and Perquimans — reported rates of 5 percent or lower. By comparison, 59 counties reported a rate that low in June.

And for the fifth straight month, no county had a jobless rate of 10 percent or more in July. Scotland County continued to have the state’s highest unemployment rate, 9.1%. Avery County replaced Orange County with the lowest rate: 3.5%.

Among metro areas, Rocky Mount had the highest unemployment rate, 6.7%, while Durham-Chapel Hill and Raleigh each had the lowest at 3.9%.

Elizabeth City police say a man was in serious but stable condition at a Virginia hospital on Sunday after he was struck by a vehicle on Hughes Boulevard.

The man was transported by Pasquotank-Camden Emergency Medical Services to Sentara Albemarle Medical Center, where he was then flown by Nightingale helicopter to Sentara Norfolk General Hospital, Martin said.

Martin said the man did not have any identification on him, so police still had not identified him as of Sunday afternoon. The man was listed in serious but stable condition at Sentara Norfolk, Martin said later.

Martin described the man as Hispanic, around 5-foot, 4-inches tall and weighing 150 pounds. He was wearing blue jeans, a blue shirt, brown shoes and a black hat, Martin said.

Martin said the driver of the vehicle that struck the man stopped immediately and reported the collision. No charges are pending against the driver, Martin said.