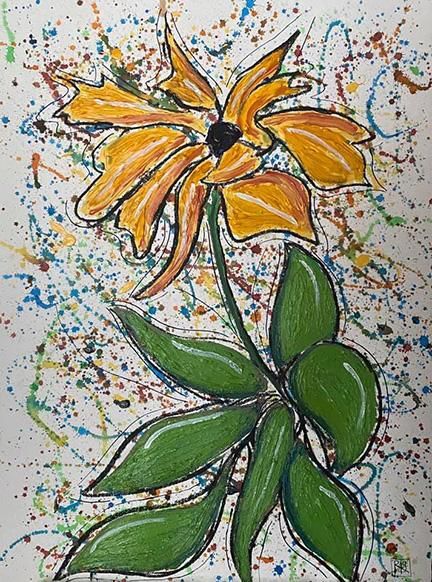 Pctured is a photo (left) of a painting by artist Robert Kelly-Goss. This painting is among a series of 12 of Kelly-Goss’ paintings that will be display at Arts of the Albemarle’s The Center this month. (Right) is an example of the paintings by Virginia-based artist Jack Pardue that will also be on display.

Shown is an example of the paintings by Virginia-based artist Jack Pardue that will be on display at Arts of the Albemarle's The Center this month.

Pctured is a photo (left) of a painting by artist Robert Kelly-Goss. This painting is among a series of 12 of Kelly-Goss’ paintings that will be display at Arts of the Albemarle’s The Center this month. (Right) is an example of the paintings by Virginia-based artist Jack Pardue that will also be on display.

Shown is an example of the paintings by Virginia-based artist Jack Pardue that will be on display at Arts of the Albemarle's The Center this month.

Two local artists will be featured at Arts of the Albemarle through November.

Robert Kelly-Goss, who has spent a lifetime as an artist, is one of two featured artists whose work went on display at AoA Friday during the First Friday ArtWalk. AoA also is featuring the work of Hertford-based painter Jack Pardue this month.

Kelly-Goss’s new series “Unframed: Mixed Media on Paper” is a collection of 12 floral designs completed with acrylic paints and inks, pastels, charcoal, among other mediums, on heavy-gauge paper. Like the title suggests, none of the finished art is set within a frame.

Kelly-Goss said he chose 300-pound cold pressed paper for the project because its extreme texture provides a lot of “tooth,” which provides a surface suitable for retaining paint and other mediums.

He said he prefers acrylic paints because of the flexibility the water-based product provides him. For example, he said by adding water to it acrylic paint can be used similar to watercolors. Likewise, acrylic paint can be applied in thick, heavy brush strokes to give the surface a raised look, or a technique known as impasto.

Kelly-Goss said many of the inspirations for his floral designs were found walking around his Weeksville home.

“They’re actually all flowers from around here,” he said. While out walking or visiting somewhere and he sees a flower he snaps a photo of it with his phone. At home in his studio he studies the photo and duplicates it with his artistic approach.

Kelly-Goss, who also is a cartoonist, has completed several works of art, many of them done as commissioned pieces.

To view more of Kelly-Goss’s work, visit his two Instagram accounts at rkgstudio and portraitsofamerica. He described the latter account as a way to feature people who represent “grassroots America.”

Pardue, who for several years lived in northern Virginia, now lives in Hertford after moving there last December.

Pardue specializes in colorful plein air paintings because of his passion for landscape art, according to his online biography.

“Jack’s never-ending pursuit of luminous color is clearly demonstrated in his pastel and oil landscape paintings,” AoA said in its promotional literature of Pardue’s art. “They radiate with light and color. ... He finds it very challenging and rewarding to work quickly under changing light conditions. Jack believes in using high-key colors, saying, ‘They allow me the freedom to express myself without constraint.’

Guests visiting AoA this month will find a variety of Pardue’s landscapes, which he captured from several states, including Maine. One painting from his time in Maine is titled “East Boothbay Christmas.” Plein air painting is typically done outdoors in natural sunlight. Pardue said it was so cold the day he painted “East Boothbay Christmas” he had to paint it from inside a building looking out through a tall plate glass window. Otherwise the cold weather would have made it nearly impossible to work with his paints, he said.

Pardue spent nearly 30 years as a freelance illustrator before he turned his artistic attention to portrait painting. Now he enjoys creating landscapes using pastels and oil paints. For one project, which involved a trip to Ireland, Pardue had to swap his oils for acrylics because the airline would not allow oil paints on board, for fear of their combustibility, he said.

Pardue enjoys northeastern North Carolina, particularly when it comes to painting in the Outer Banks.