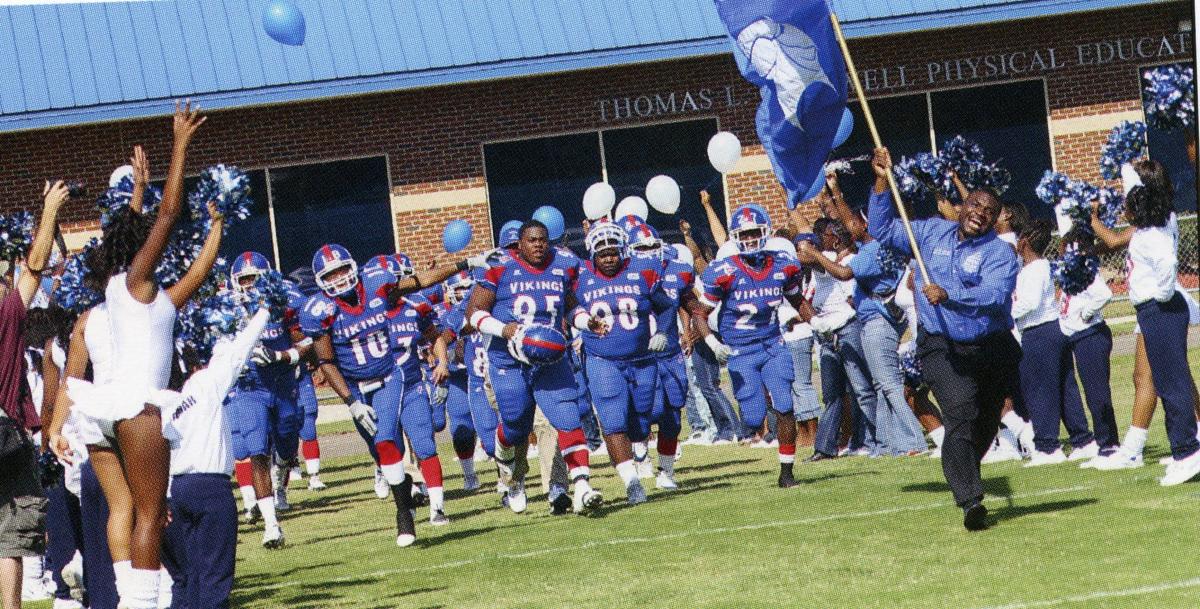 The Elizabeth City State University Vikings got off to a good start in the decade that began in 2010, winning the Northern Division of the Central Intercollegiate Athletic Association in both 2011 and 2012 but losing the conference championship game both years to Winston-Salem State. In 2012, however, they would go on to defeat the Tuskegee Golden Tigers 28-13 in the Pioneer Bowl. 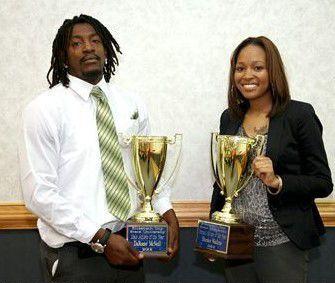 Running back DaRonte McNeill, shown here with fellow ECSU Athlete of the Year Shanice Watkins, led the Vikings to successful seasons in both 2011 and 2012, setting 14 new school records. An astounding nine Elizabeth City State players, including McNeill, were voted to the First Team All-CIAA team in 2011.

The Elizabeth City State University Vikings got off to a good start in the decade that began in 2010, winning the Northern Division of the Central Intercollegiate Athletic Association in both 2011 and 2012 but losing the conference championship game both years to Winston-Salem State. In 2012, however, they would go on to defeat the Tuskegee Golden Tigers 28-13 in the Pioneer Bowl.

Running back DaRonte McNeill, shown here with fellow ECSU Athlete of the Year Shanice Watkins, led the Vikings to successful seasons in both 2011 and 2012, setting 14 new school records. An astounding nine Elizabeth City State players, including McNeill, were voted to the First Team All-CIAA team in 2011.

Editor’s note: The following is the 10th and final story in a multi-part series about the history of Elizabeth City State University’s football program. This story details that history from 2010 to the present day.

The Elizabeth City State Vikings entered the 2010s with high hopes, but as the decade unfolded, there were dangers ahead, dangers far more threatening than anything found on a gridiron.

Before the 2010 season, some wondered if this was to be “the year.” With pre-season All American Malcolm Jenkins leading the defense, the team gained a Down East Classic victory over the defending CIAA champions, but the year nevertheless ended without a championship.

The 2011 season opened with the most difficult non-conference road game in program history. In 2010 Delta State lost the Division II championship by only a field goal, yet the Vikings actually led Delta 21-7 at halftime before fading in overtime. The opening conference game was also a loss, this time to Winston-Salem State, a former Division I program now back in the Central Intercollegiate Athletic Association.

But suddenly the Vikings rattled off a string of dominant wins, including a 49-7 rout at the Down East Classic. The Northern Division was theirs even before season’s end. An astounding nine Elizabeth City State players were voted to the First Team All-CIAA, including running back DaRonte McNeill, who had set 14 new school records.

If 2010 wasn’t “the year,” maybe 2011 would be. But, alas, it was not to be, as the undefeated Winston-Salem State Rams ended the Vikings’ hopes with a 38-18 win for the CIAA championship. After the loss, the Vikings learned that they were back in the NCAA Division II playoffs as a #4 seed.

They had earned a home game against #5 seed California University of Pennsylvania, but unfortunately ECSU lacked the stadium infrastructure required by the NCAA and was therefore banned from hosting. Fair or not, they would have to travel hundreds of miles to play on the road, where they lost. An 8-4 record was respectable, considering that all four losses were against ranked teams.

The 2012 team was ranked #18 in a pre-season poll by Lindy’s Sports Magazine. Two tough non-conference games both ended in demoralizing losses, but hope was not lost, since the Vikings still had McNeill, the reigning CIAA Offensive Player of the Year. Against Chowan University, the 6’2” back diced through the defense as if he were a lawnmower cutting grass, collecting 290 yards.

The season ended with another Northern Division title and a rematch with undefeated Winston-Salem State for the CIAA championship. The Rams had both the CIAA Offensive and Defensive Players of the Year and were also ranked #2 in the nation. Despite the herculean efforts of McNeill and All-American linebacker Brad Davis, the Vikings fell 34-19. They were nevertheless invited to the Pioneer Bowl, and a pair of shrewd defensive plays propelled them to a 28-13 victory over the Tuskegee Golden Tigers.

As the players celebrated, little would they know that they would be the last Viking team to date to enjoy a winning season. The team’s on-field success was soon overshadowed by on-campus crises: plummeting enrollment, a $5 million budget shortfall, and the sudden resignation of Chancellor Willie Gilchrist.

Coach Waverly Tillar did his best to keep his players focused on academics and football and not on campus uncertainty, but a 0-4 start in 2013 reflected the limits of positive thinking. The Vikings had their first losing season in eight seasons. The next season would be about the same, at 4-6.

The 2015 season would be the third consecutive four-win campaign, along with a third straight defeat at the Down East Classic. To make matters worse, for the first time, the Vikings lost to neighboring Chowan University, a team that up until then they had dominated.

The Viking football program had hit hard times, and after 13 seasons, Coach Tillar was unceremoniously fired by new Chancellor Stacy Franklin Jones in what might be perhaps the most disappointing decision made by any administration regarding the Elizabeth City State football program. A caring, committed coach who ran a clean program, he loved his players, and they loved him back. Moreover, his well-coached teams regularly defeated others having more scholarship players.

In reality, the challenges plaguing Viking football were largely out of Tillar’s control. Division II schools can offer up to 36 scholarships, but in 2013 financially strapped ECSU could afford only 13. Moreover, as the University of North Carolina General Administration increased entrance requirements at state universities, some private institutions in the CIAA would admit students with a barebones 2.0 grade-point average. Some talented players who wanted to come to ECSU could not because they lacked the grades.

Critics point to Tillar’s CIAA championship game losses yet fail to mention that three of those were to what were largely Division I teams. North Carolina Central moved up to Division I the next game after defeating the Vikings in 2006, and Winston-Salem State went undefeated in the CIAA in 2011 and 2012 after moving back down to Division II largely because their players were Division I recruits.

Arguably, no coach could overcome the deep financial problems now plaguing the university, not even Tillar’s replacement Earnest Wilson III, a former Division I coach with Savannah State. Even though he was the 2016 CIAA Coach of the Year, the losing continued during his two years. He was replaced in 2018 by Anthony Jones, who had won a Super Bowl ring with what is now the Washington Football Team. Although the team made incremental progress, his tenure ended on Monday after he led the team to only six wins over three seasons.

History is about trying to understand the past, not predicting the future. If the past can reveal patterns, however, one seems apparent: throughout its long and proud history, the Elizabeth City State football program has thrived only when the university itself is committed to its success.

Nationwide, one disturbing trend is that young men seem increasingly disenchanted with higher education. According to National Student Clearinghouse data, men represent around three-quarters of pandemic-related dropouts. In the last five years, overall enrollment has dipped by 1.5 million, with males making up an astounding 71% of those leaving school. If ECSU truly values young men and wants to help reverse that pattern, it will support those programs with a track record of success in recruiting, mentoring, and preparing them. One of those is the Viking football program.

In a special note to readers, we thank you for the chance to share a weekly slice of football history over the last three months, and thank you for your continued support of Elizabeth City State University.

Glen Bowman is a professor of history at Elizabeth City State University and Westry Thorpe is a senior history major at ECSU who is minoring in the science of coaching.