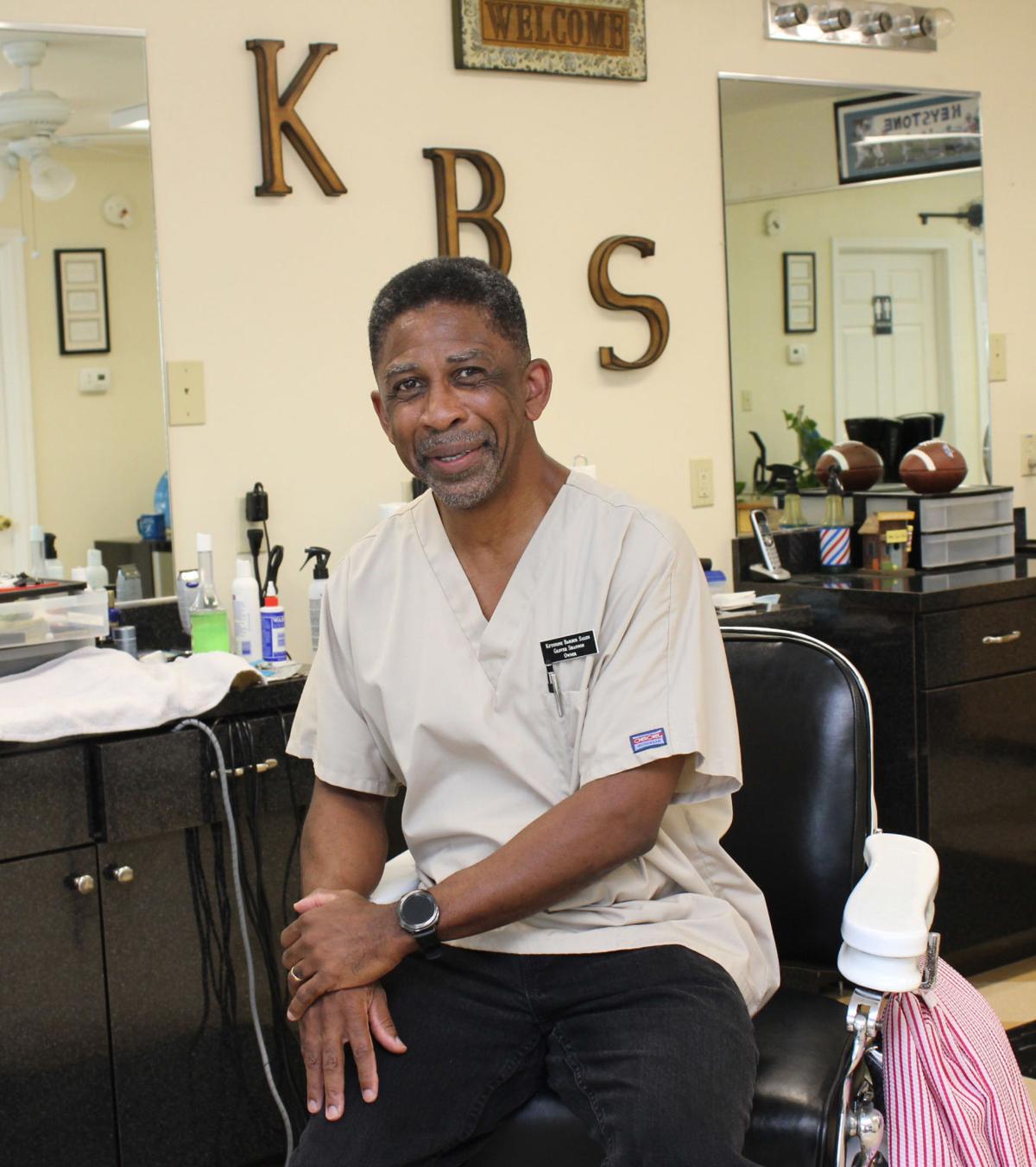 Glover Shannon, owner of Keystone Barbershop, is shown in one of his two barbershops at 402 Shepard St., Elizabeth City. Shannon said his small business has been significantly affected by the COVID-19 pandemic, as many of his regular customers still aren’t returning for haircuts yet. 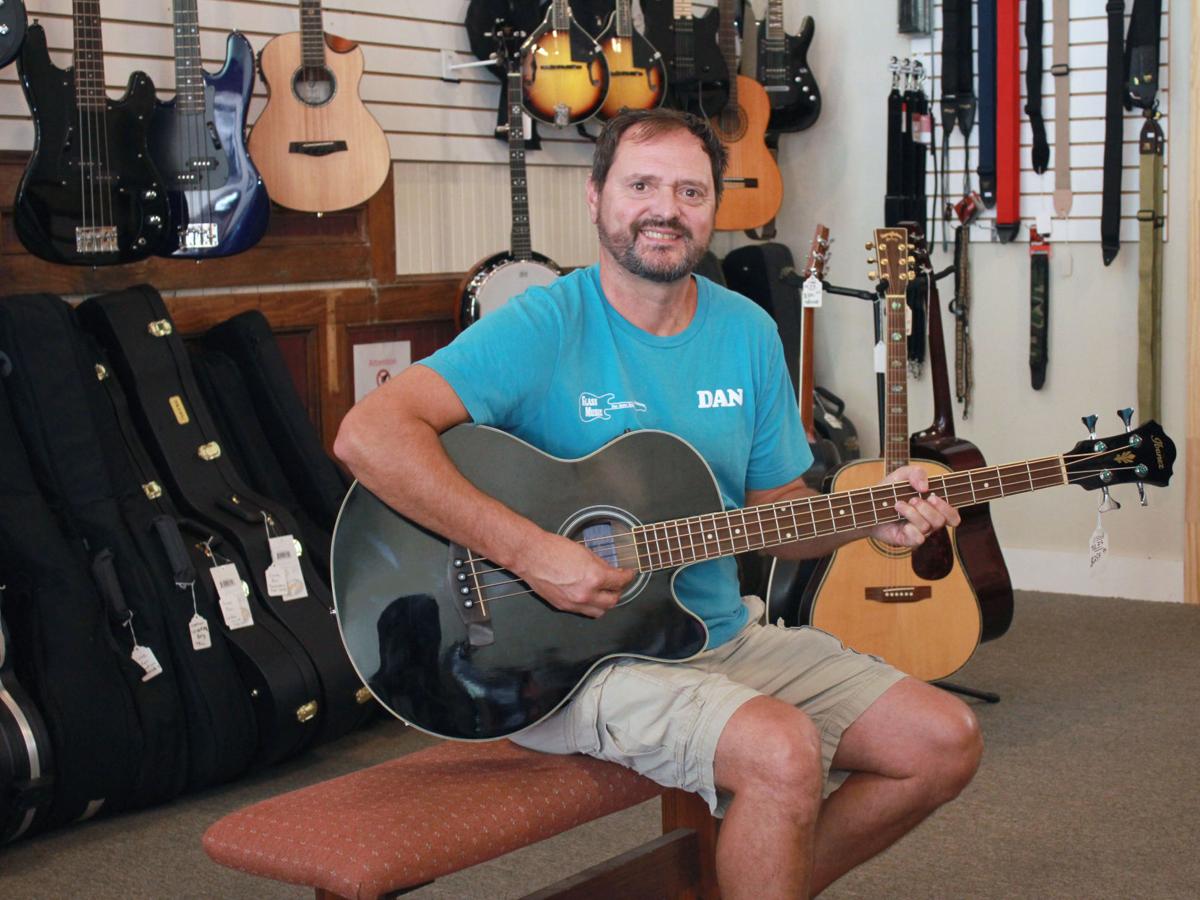 Dan Glass, owner of Glass Music on North Poindexter Street, said this spring was the best sales season he’s had since he opened his business in 2017. He believes people being forced to stay home during the pandemic contributed to the uptick.

Glover Shannon, owner of Keystone Barbershop, is shown in one of his two barbershops at 402 Shepard St., Elizabeth City. Shannon said his small business has been significantly affected by the COVID-19 pandemic, as many of his regular customers still aren’t returning for haircuts yet.

Dan Glass, owner of Glass Music on North Poindexter Street, said this spring was the best sales season he’s had since he opened his business in 2017. He believes people being forced to stay home during the pandemic contributed to the uptick.

The owners of three local small businesses affected by the COVID-19 pandemic have distinctly different outlooks heading into the fall.

His two barbershops, like others across the state, were forced to close under Gov. Roy Cooper’s March 23 order designed to slow the spread of COVID-19. The order closed most businesses where people were likely to gather indoors: barbershops, nail salons, gyms and movie theaters.

At the time, Shannon was hoping his shops would only be closed for two weeks. However, they ended up being shuttered until June.

Barbershops were allowed to reopen under social distancing restrictions in May. However, Shannon chose to keep his closed because he said he wanted to see how other shop owners navigated the new rules before trying it himself.

When he finally did reopen, Shannon followed public health officials’ recommendations, stocking up on cleaning and sanitation supplies, setting out additional soap for customers, and posting signage in his shops about new procedures. He also instituted rules like requiring customers to don masks and wash their hands before receiving service.

“There are also temperature checks when they arrive,” Shannon said. “Customers must arrive wearing a mask and continue wearing the mask throughout service. They must wash their hands thoroughly. ... The easel outlines the protocols for anyone who wonders.”

But despite providing a safe environment for customers, Shannon said foot traffic in his shop isn’t what it was before the pandemic. Shannon — who’s been in business 40 years — has always been able to depend on a steady flow of regular customers. He says his customers, both adults and young people, take pride in being well groomed whether it’s for work, church or school. He’s dismayed that many haven’t come back to get a haircut.

“Some people are still afraid of coming out,” he said. “People may not be aware of all the protocols in place now but we want to assure customers barbers can service customers — just with fewer people in the building at a time. In the meantime, we are trying to weather this thing out.”

Like other small businesspeople, Shannon was severely affected by the loss of income during the three months his barbershops were closed. He notes his income may have stopped but his bills keep coming.

Shannon said he was encouraged by information he received from the Elizabeth City Area Chamber of Commerce and the Elizabeth City-Pasquotank Economic Development Commission. A small grant from the city COVID-19 relief fund also helped. But he makes no bones about the fact his business is still struggling.

“It’s absolutely tougher to be in business now than before the virus arrived,” Shannon said. “For anyone considering opening a business, do your research, know that expenses can arise for water, personal protection equipment.”

Despite his shops’ current struggles, Shannon plans to hang in there and hope business turns around.

“I am in business to provide a service to my customers and I wouldn’t have it any other way,” he said.

Dan Glass’ fortunes during the pandemic have been much different. Glass, owner of Glass Music on North Poindexter Street, says this spring was the best sales season he’s had since he opened his business in August 2017.

It seems the requirement to stay home gave people the one thing that previously kept many of them from pursing their dream to perform music: time.

“It’s been my best spring and summer in three years,” Glass said. “My customers had time to learn to play the banjo or the guitar. ... We had a run on guitar buying, accessories, strings. It was pretty amazing. Not expected but very welcome.”

Glass, a retired firefighter, said customers who’ve bought instruments from him have ranged in age from 8 to 80. Some also live outside the area, drawn by his attractive prices.

“I hear people say, ‘you charge less than they do in Greenville, Norfolk and Virginia Beach,’” he said. “I tell them, ‘I might not carry everything a large music store could carry; but what I have you can count on — service to keep your instrument performing at its best.’”

Glass has his own theory of why he’s been successful during the pandemic.

“Playing an instrument, it’s great therapy,” he said. “I tell kids when you learn to play that instrument well, people look at you differently because you are special. You gotta want it (success), though. If you put in the work, take the lessons, you can learn and get better.”

Lennette Ventura’s experience is more like Shannon’s. The owner of Famous Franks Hot Dogs & Grill on Church Street Extended said the challenges of running a small restaurant during a pandemic ultimately were too much for her to overcome. She closed the business on Sept. 4.

Ventura, who owned and operated Famous Franks for five years, said it was never easy for her to turn a profit, even before the pandemic. Famous Franks charged less than $5 for most menu items.

Ventura had hoped that by adding new menu items while keeping popular favorites would have boosted Famous Franks’ business. But when Cooper’s executive order in March ordered restaurants to suspend in-person dining, allowing them to provide takeout service only, her chance to make a profit disappeared.

Cooper’s Phase 2 restrictions allowed restaurants to resume offering in-person dining in May. However, they could do so only at 50 percent capacity.

When Ventura attempted to reopen, she found it difficult to lure back her former employees. Many were receiving unemployment benefits greater than what she was able to pay them, she said.

Ventura received a federal Paycheck Protection Program loan but it ultimately wasn’t enough to help. Her rent, vendor fees, and loss of customers, combined with an uncertain future, led her to conclude this wasn’t the time for her to try and save a small restaurant.

“I’d already run into repairs earlier in the year here that cost me money,” she said. “After we reopened I found myself running the kitchen some days alone while one waitress worked the tables with customers. I tried to hire and train new employees but it just wasn’t the same. The lease is up in October so I will sell as much of the equipment as possible and move on.”

Ventura graduated from College of The Albemarle, attended ITT Technical Institute in Norfolk, and earned a criminal justice degree from Elizabeth City State University, but said she’s “done with school.” She said she “should have done more research before buying this business” but doesn’t regret opening it.

“I’ve learned some lessons. I’m just sorry I had to learn them the hard way,” she said.