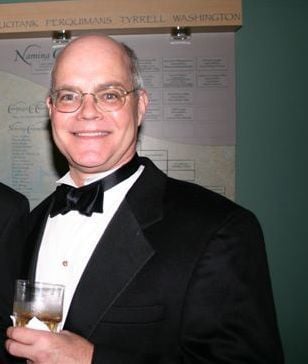 Museum of the Albemarle recently dedicated the Thomas R. Butchko Collections Staging Room on the second floor of the museum in honor of Butchko’s life and work. Butchko, a curator at the library, died in November 2009.

In the 10 years since Tom Butchko’s passing, Museum of the Albemarle has grown to fulfill the dreams and aspirations that he prophesied during his tenure as the museum’s curator.

Tom, who was born on Sept. 1, 1953 and died Nov. 21, 2009, was a native of Ohio who found his way south by way of the University of Georgia. He received a band scholarship to be part of the Marching Bulldogs. He spent Saturdays in the fall playing “between the hedges,” as UGA dominated football. I enjoyed discussing the rivalries in college football with him, especially when it involved the Atlantic Coast Conference.

Tom’s first love was historic architecture and his second was horticulture, his major at Georgia. After he graduated, he found work inventorying historic structures in North Carolina.

Tom’s apprenticeship began in the Piedmont and it would gradually bring him to the oldest region of the state, the Albemarle. He regularly joked that he was like Brer Rabbit, thrown into the briar patch. He had a dry wit and ironic sense of humor and entertained the staff during meetings.

Tom was instrumental in locating, researching and preserving the 1750s Jackson House, on display in “Our Story,” the chronological story of the Albemarle region at the museum. He worked to ensure accuracy throughout the gallery and was fact-checking and rewriting labels until the exhibit was installed.

His greatest gift to the region was recording the history of its people and historic structures. He laid the groundwork for structures’ nomination to the National Register of Historic Places. He worked in Perquimans, Pasquotank, Gates, Chowan and Martin counties. He was the foremost scholar of northeastern North Carolina’s architectural history.

We recently dedicated the Thomas R. Butchko Collections Staging room on the second floor of the museum in honor of Tom’s life and work. He was a great friend to the many people he encountered in his quest to save the historic fiber of the region.

The museum also established the Thomas R. Butchko Memorial Fund to help preserve artifacts in our collection in care of the Friends of the Museum of the Albemarle.

If you’d like to donate to the fund in his memory the museum has many artifacts, especially in our textiles collection, which would benefit from your contribution. Checks can be mailed to: Friends of the Museum of the Albemarle, Attn: Tom Butchko Memorial Fund, 501 South Water St., Elizabeth City, NC 27909.

The Friends are also discussing a new release of Tom’s book, “On the Shores of the Pasquotank,” first published in 1989. Tentatively, the format will be as a digital eBook to help people better understand the historic homes in Elizabeth City and Pasquotank County.

We are also planning a formal dedication of the room in the future to honor Tom and his legacy. We will provide more details as we determine a date with his family.