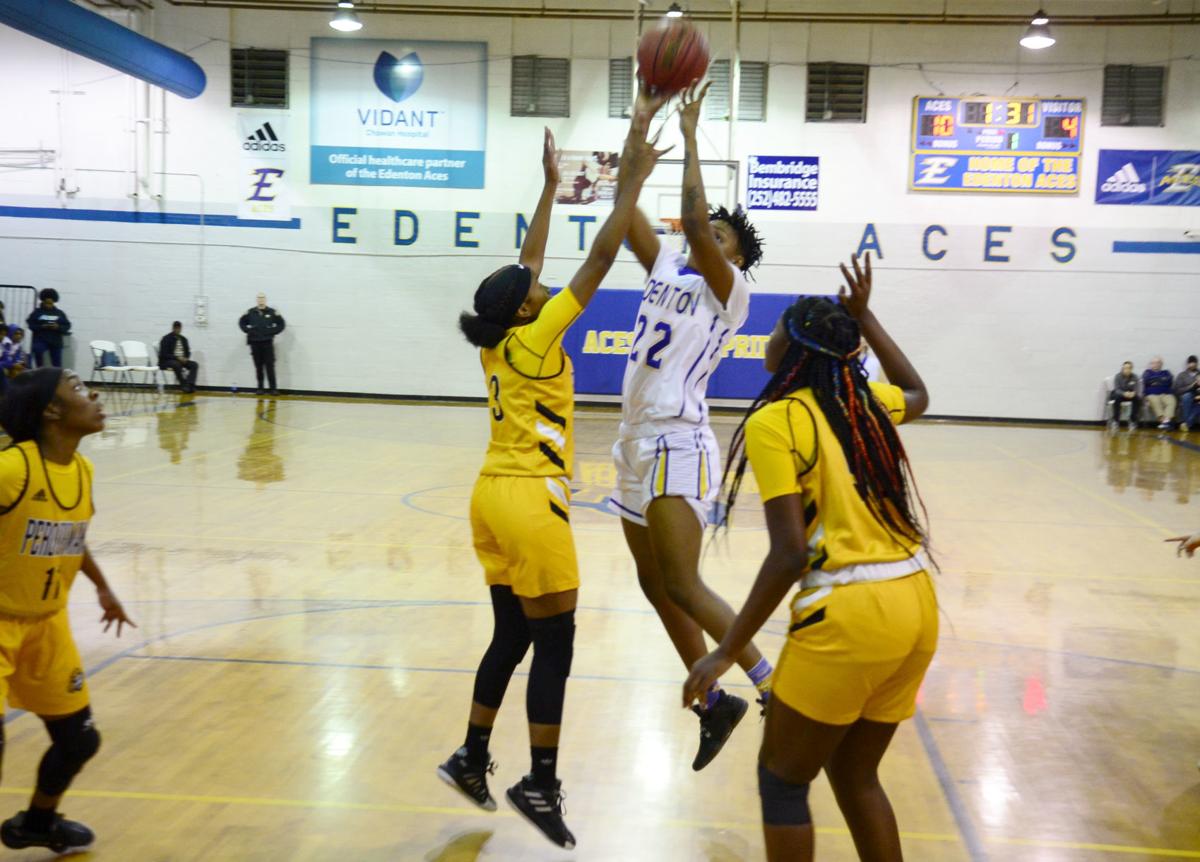 John A. Holmes’ Le’Asia Stanley (with ball) shoots over Perquimans’ Jada Modlin (3) during the girls’ 1A NCHSAA second-round game in Edenton, Thursday. 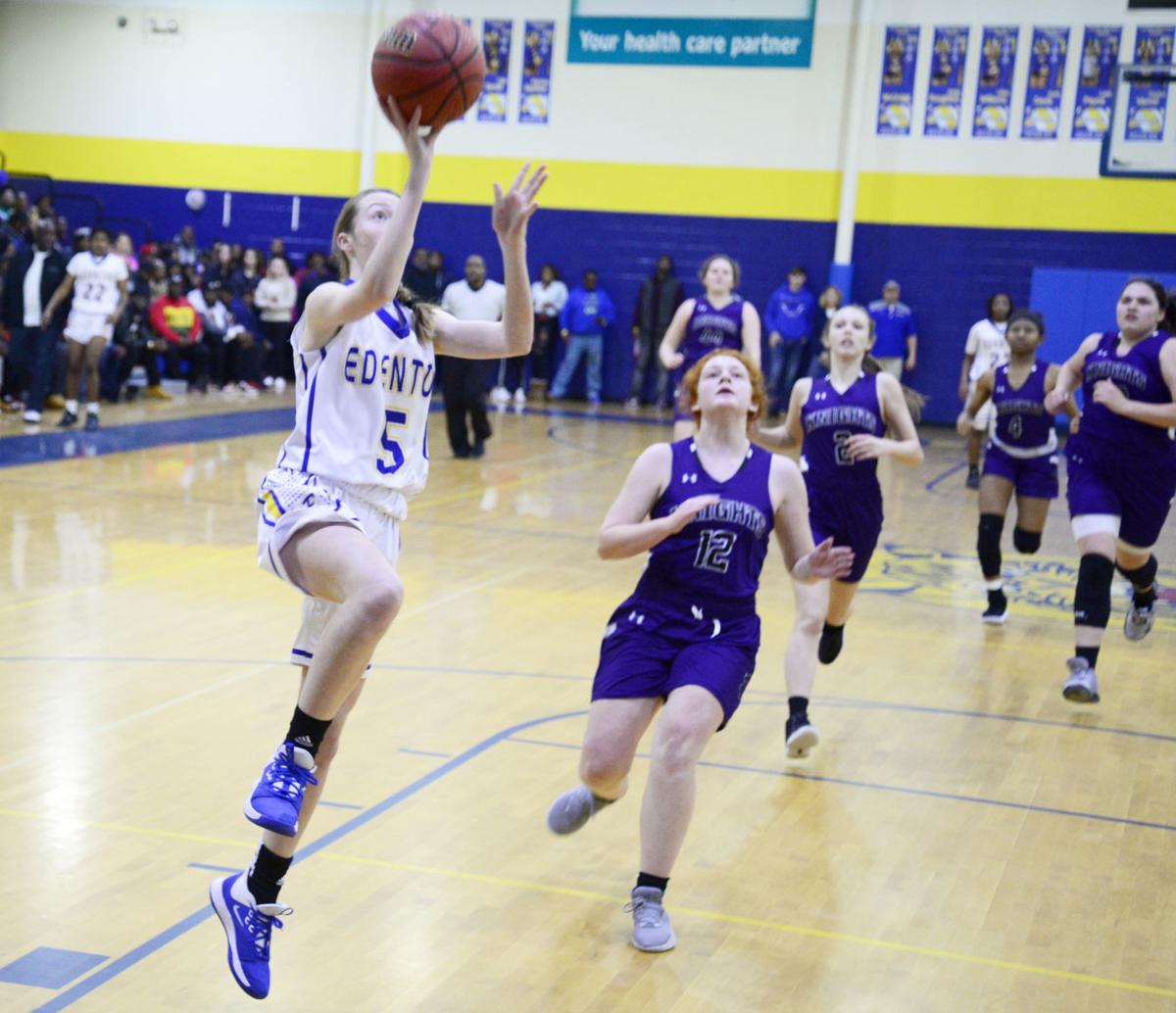 John A. Holmes’ Sydney Spear (5) goes up for a layup during a 1A NCHSAA third-round game against Chatham Charter at Columbia High School, Saturday.

John A. Holmes’ Le’Asia Stanley (with ball) shoots over Perquimans’ Jada Modlin (3) during the girls’ 1A NCHSAA second-round game in Edenton, Thursday.

John A. Holmes’ Sydney Spear (5) goes up for a layup during a 1A NCHSAA third-round game against Chatham Charter at Columbia High School, Saturday.

It was a promising start for Edenton that just kept getting better as the team had offensive success early on.

Sophomore Le’Asia Stanley, who led her team with 22 points, 15 rebounds, five assists and three blocks, got the night started with a 3-pointer assisted by Sydney Spear on the first shot of the game.

Stanley once again put the Lady Aces on top with a layup to make it 5-3 as Dymon Rankins grabbed an offensive rebound and put the ball back up for a 7-5 lead and Spear, who scored 11 in the game, laid one up after a long assist from Stanley for a 9-5 lead.

Behind Morgan Lineberry, who scored seven of her team-high 16 points in the first quarter alone, Chatham Charter didn’t stray too far behind after eight minutes as it trailed just 16-13.

But Edenton pushed its lead to 11, 33-22, by halftime, as its defense picked up forcing several missed shots from the Lady Knights and easier baskets on the other end.

“We’ve done a good job of getting the ball down low to Le’Asia. She got off to a good start tonight and we kind of fed off of that,” John A. Holmes head coach Brian Chappell said. “We were able to get some easy transition baskets off our defense too.”

The Lady Aces used a 10-3 run in the middle of the quarter to separate.

It was much of the same for Edenton in the second half as its lead grew to as much as 14 in the third quarter despite being whistled for several fouls.

Their lead grew to as much as 24 in the fourth quarter with a 59-34 advantage after back-to-back layups from junior Jamillian Johnson thanks to consecutive interceptions by Stanley on the other end.

“I’m proud of the way we’re playing,” Chappell said. “We’re still making mistakes, but that’s part of being a young basketball team. We’ve improved so much from the beginning of the season.”

John A. Holmes 47, Perquimans 27: The John A. Holmes and Perqumans girls’ basketball teams have gotten to know each other pretty well over the course of the 2019-20 season.

Thursday night’s 1A NCHSAA second-round playoff game in Edenton was the fourth and final meeting between the two as Edenton won two of the first three.

With that familiarity, a close game was expected and for a while it was.

Then, the Lady Aces went on a 22-0 run in the second half on their way to a 47-27 win over Perquimans and advance to Saturday’s third round.

“It started on the defensive end,” John A. Holmes head coach Brian Chappell said. “Defensively, we created easier baskets for ourselves in the second half and we were able to make a run.”

The first eight points of the run for the Lady Aces closed out the third as junior Jamillian Johnson made a basket and sophomore Le’Asia Stanley hit a 3 thanks to an assist from freshman Carson Ray to make it 30-23.

Sophomore Sydney Spear closed out the quarter with a deep buzzer-beating 3 to increase their advantage to 33-23.

Spear then scored her second and last field goal of the game on a layup on the team’s first possession of the fourth quarter.

It was all Stanley for a while after that.

The Lady Aces’ leading scorer, who scored 26 Thursday along with hauling in 17 rebounds, scored the next eight points to extend the lead to 20 at 43-23.

Stanley scored 18 points in the second half after a slow start in the first half.

Kaci Drew was second on the team with six points.