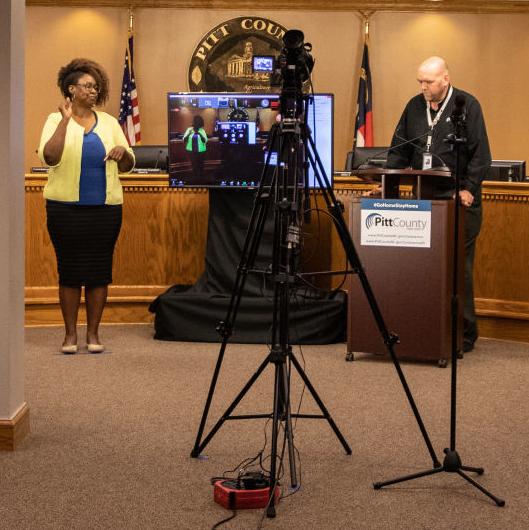 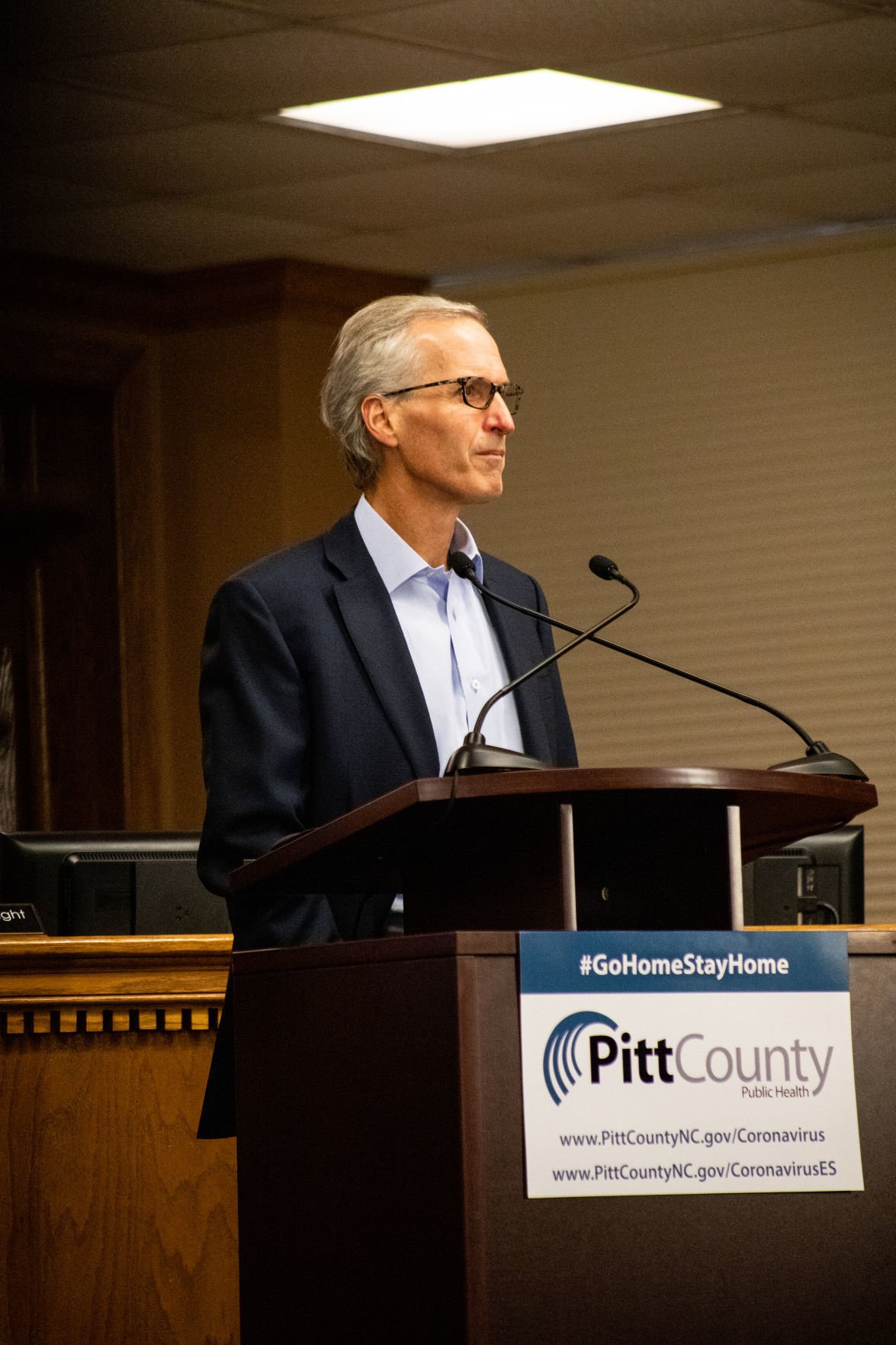 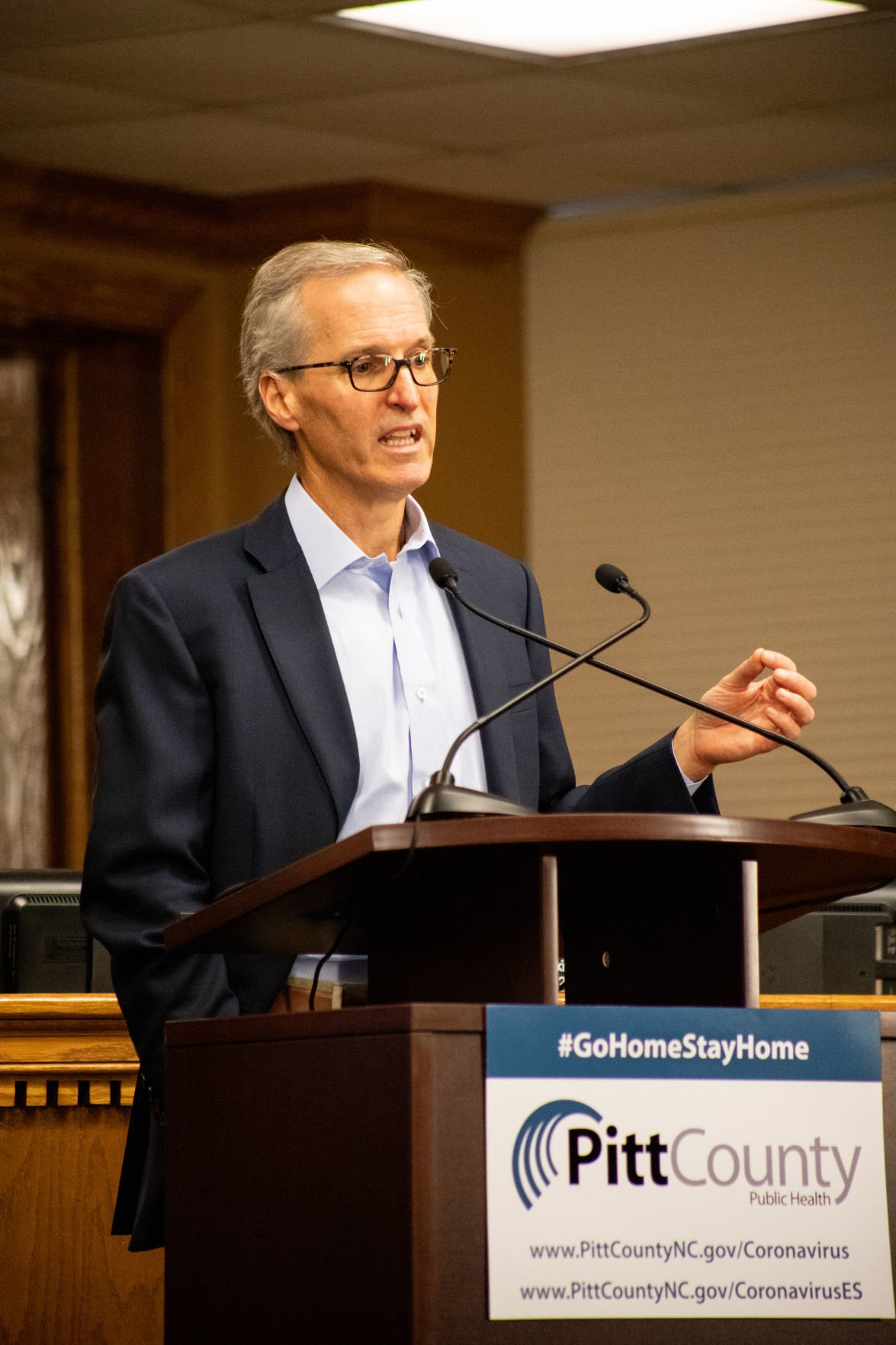 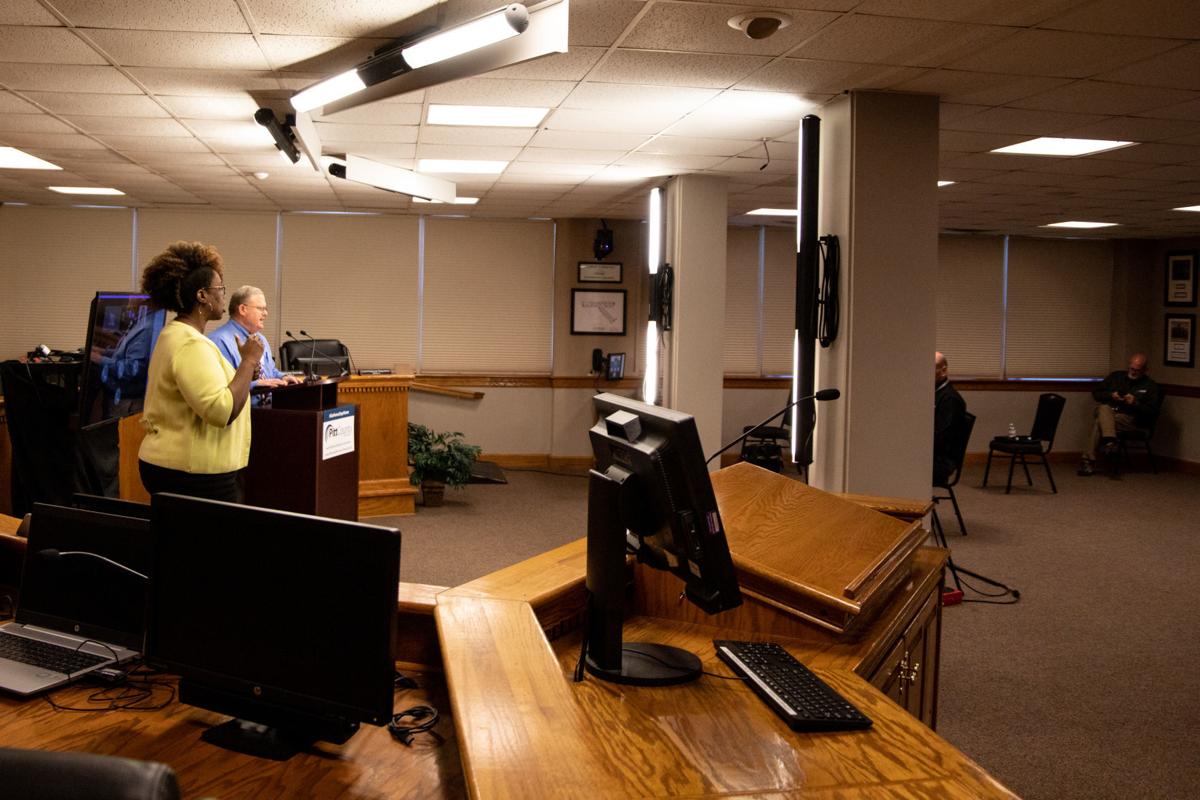 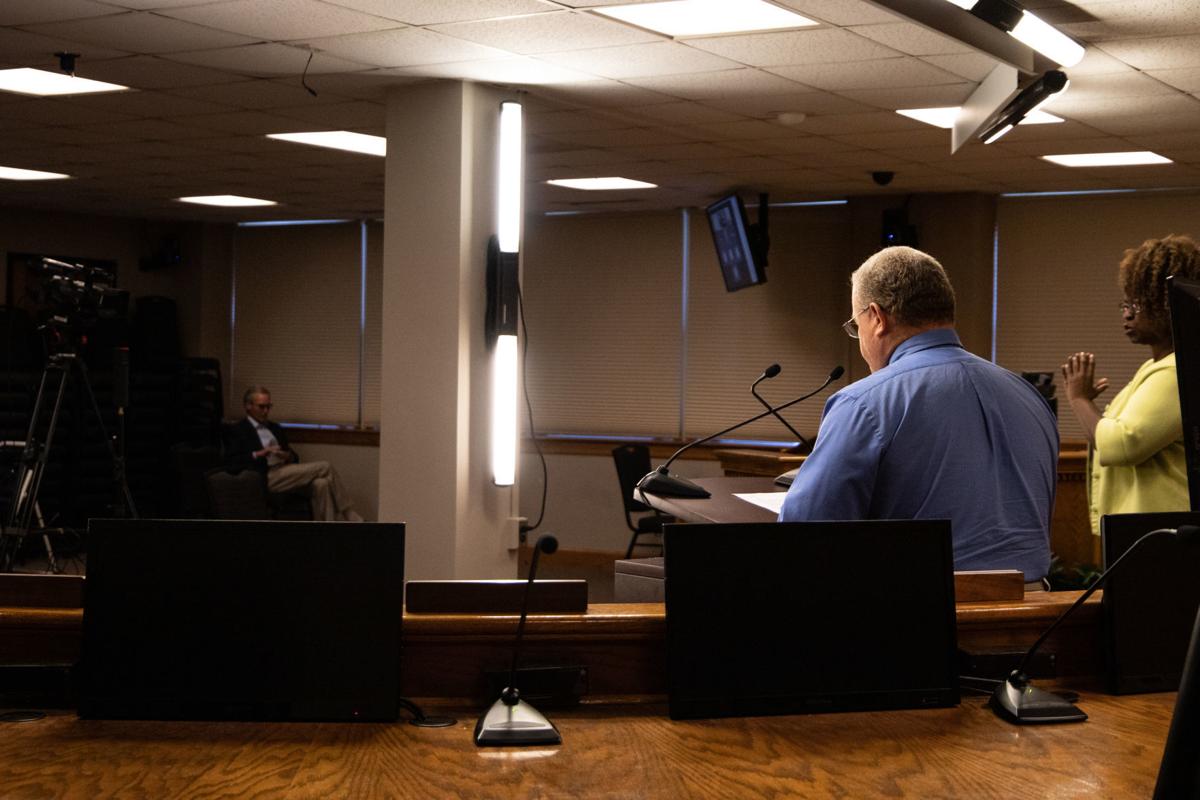 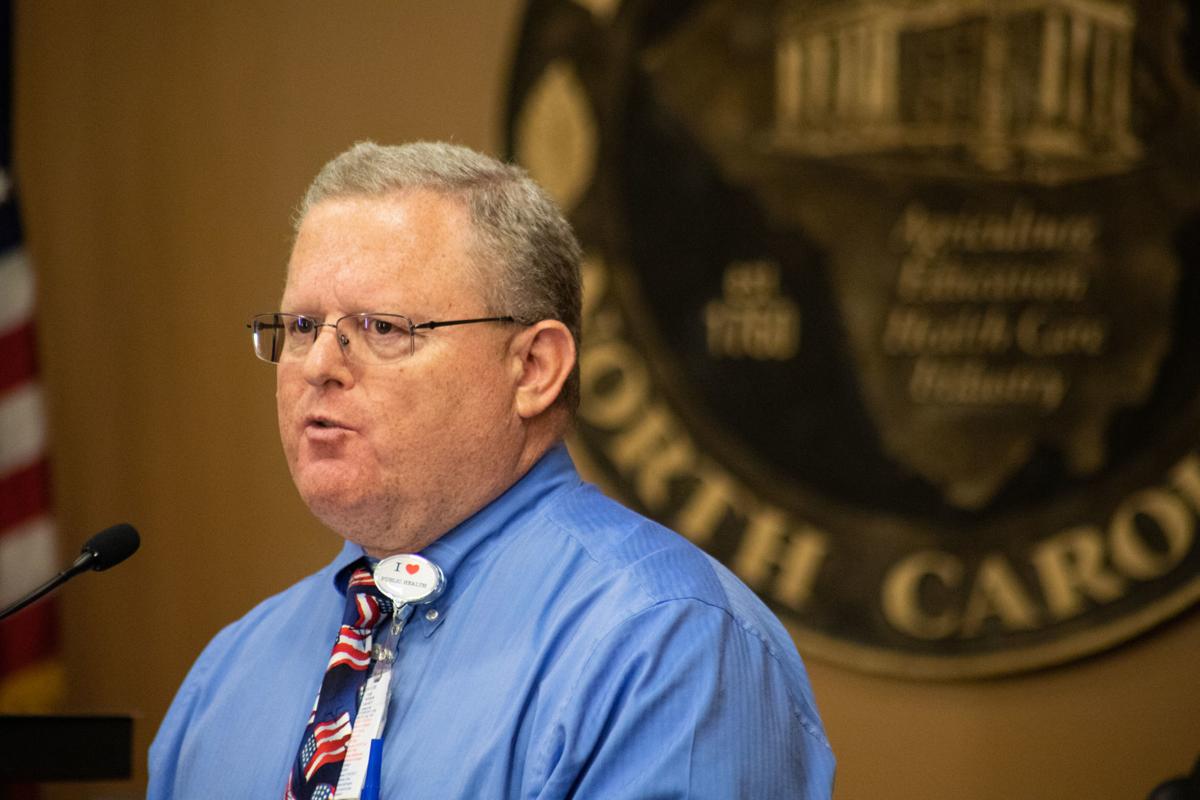 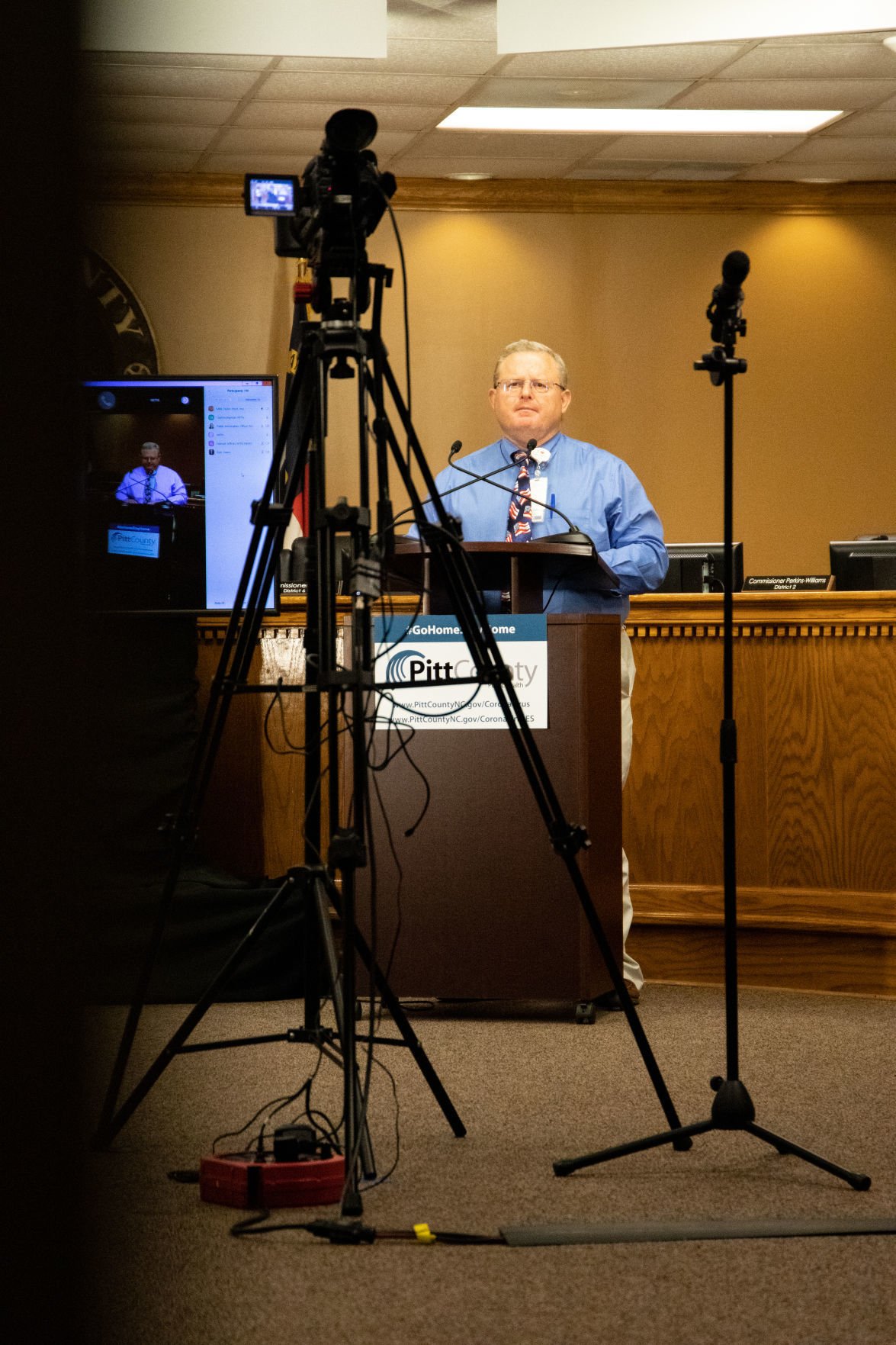 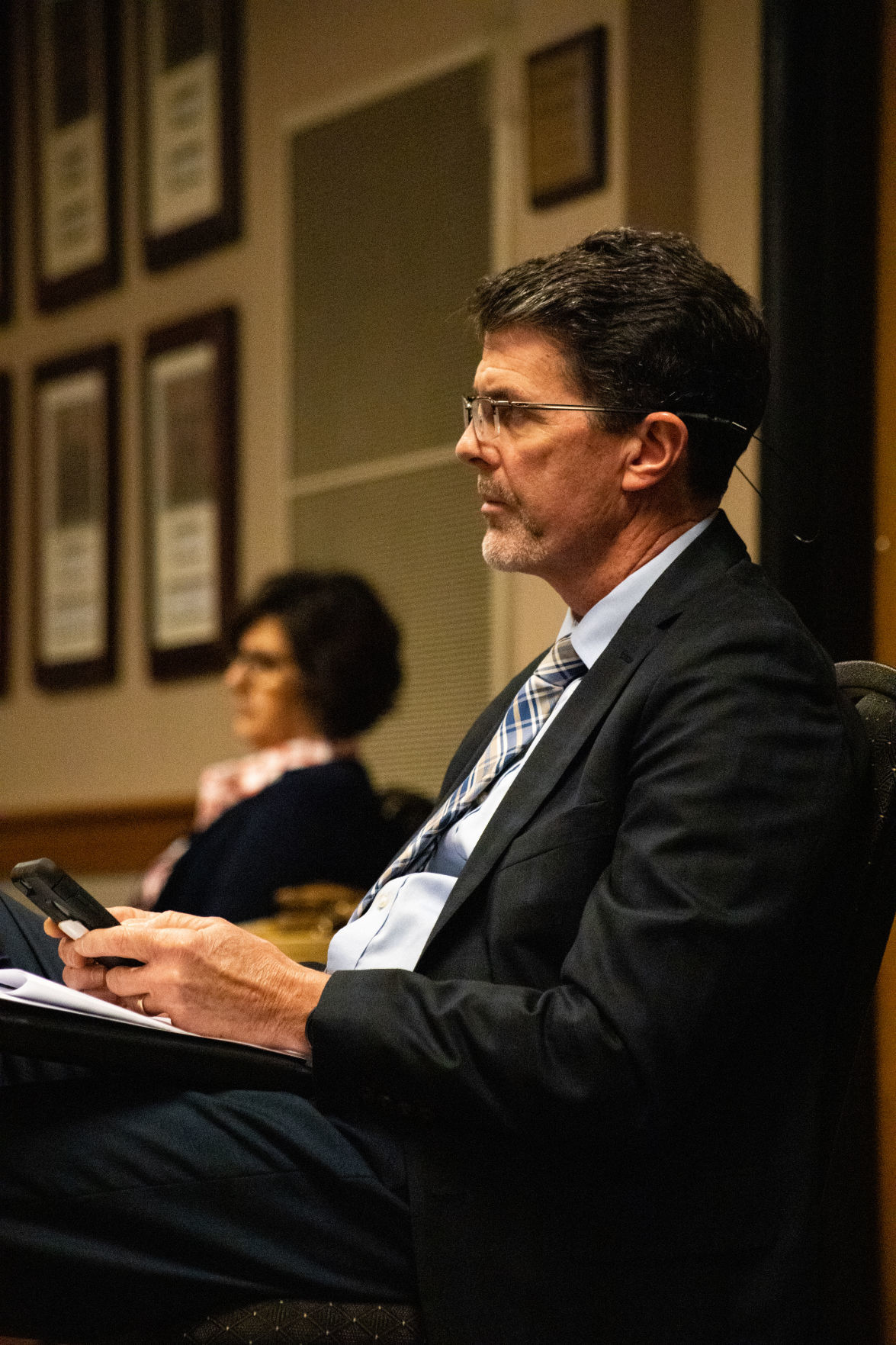 GREENVILLE — The Greenville area could know next week if it will be spared the worst of the COVID-19 pandemic or if Vidant Health “will need to build another hospital” overnight, medical leaders said Thursday during a meeting of ECU’s Board of Trustees.

Vidant Health CEO Dr. Michael Waldrum and Vice Chancellor of Health Sciences Dr. Mark Stacy discussed epidemiology models and the joint efforts of the hospital and medical school to combat the spread of COVID-19 and treat patients while maintaining their regular medical services.

Responding to trustee questions, Waldrum said Vidant Medical Center has an acute care capacity of between 900 and 1,000 beds with the ability to sustain 250 people on ventilators at the peak.

Extreme models of COVID-19’s spread show the hospital may need to treat 1,800 to 1,900 patients, including 400 people on ventilators. Waldrum said both figures include caring for patients without the virus.

“I think in a week we’ll really know if the interventions we’ve taken will pay dividends,” Waldrum said. “We’ll start getting a much better signal.”

Waldrum also participated in a bi-weekly news conference at the Pitt County Office Building earlier on Thursday where officials said that the virus infection is currently projected to peak in the Greenville area in late April. As of Thursday afternoon, there were 31 confirmed cases. Officials provided few details about the people who are infected and would not report how many are hospitalized.

Worldwide the number of confirmed infections hit 1 million, with more than 50,000 deaths, according to the tally kept by Johns Hopkins University. True numbers are believed to be much higher, because of testing shortages, many mild cases that have gone unreported, and suspicions that some countries are covering up the extent of their outbreaks.

Those with COVID-19 in Pitt County are aged 17-72, Public Health Director Dr. John Silvernail said. One of the cases is believed to be related to an event at PNC Arena in Raleigh, he said, although the virus is now spreading from persons in the Greenville area.

Posts about people who have tested positive in the Greenville area are beginning to turn up in social media feeds. One woman said she had participated in several group activities just prior to testing positive and believed she contracted the virus at an event downtown.

Silvernail said he did not know the details about all the current cases.

“Again, we would encourage folks to heed that 10-person rule,” Silvernail said. “Now if there’s 10 people in your family and you all live under the same roof, I guess that’s a different story, but bringing even family groups together its probably best for now to avoid that.”

Adhering to stay-at-home orders and social distancing of at least six feet will continue to be the best weapon against the virus, along with hand-washing and practicing good hygiene, although officials said the misuse of disinfectants has prompted an increase of calls to the health department.

“Using more than the recommended amount of any disinfectant is discouraged and will not make the product work better or faster,” Silvernail said. “Improper use of disinfectants can be dangerous, leading to irritation of and damage to the skin, eyes, throat and lungs.”

Waldrum said during the news conference that a few employees at Vidant facilities have exhibited COVID-19 symptoms. He believes one employee tested positive for the virus but was quarantined early. He would not identify where the caregivers worked.

Later at the trustees meeting, he said that some providers were infected after a Vidant facility treated some residents from a Northampton County nursing home, where 24 people contracted the virus.

“We intervened with the state because there was really no function to understand that environment and to manage it effectively,” Waldrum said. “The first reaction was to send them to the hospital, but we are trying to preserve capacity for people who need capacity, and 25 people coming into the hospital in literally an hour would be a pretty devastating thing to a hospital that doesn’t have that kind of capacity.”

Waldrum and Stacy said they are hopeful that social distancing and other factors adopted in the region and ultimately statewide will decrease demand for hospitalization from 30 percent to 50 percent. But modeling is not an exact science, said Waldrum, who holds a degree in epidemiology.

UNC, Duke and a private corporation are currently working on models for the state, and could release a report on Friday, he said. Early indications are the UNC-Duke model show the outbreak in North Carolina isn’t as severe as other national models have shown.

Stacy, who also is the dean of the Brody School of Medicine, said one model that compared North Carolina to Italy, one of the hardest-hit countries that was initially slow to adopt social distancing guidelines.

Regions of the country saw varying degrees of severity, with northern Italy, where one town alone had 2,500 cases, suffering the most, and the island of Sicily faring the best.

“Me telling you that next week we’ll really know which one of those curves we’ll land on is the truth,” Stacy said. “We’re all hoping for Sicily but if we get Northern Italy we’ll get the surge Mike (Waldrum) described where we’ll need another hospital in Greenville.”

When North Carolina identified its first COVID-19 patient, Waldrum and Stacy joined other medical leaders in calling for the state to issue a stay-at-home order to limit the virus’ spread. When the governor initially failed to issue the stay-at-home order, Waldrum and Stacy turned to Pitt County government and the city of Greenville, which issued orders on March 23 and March 26.

The order was critical for the hospital’s operational abilities, Waldrum said. “Our actions in Pitt County and in Greenville and our conversations here really led the state in how we are approaching … informing the community.

“We know for sure (social distancing) does decrease the size of the surge and we are right at the beginning of being able to see those interventions take hold,” he said. “We do think they will have an impact and help protect our health care workers and our community from experiencing the full brunt of this pandemic.”