Log In Sign Up
You are the owner of this article.
Edit Article Add New Article
You have permission to edit this article.
Edit
News
Opinion
Sports
Features
Obits
Multimedia
Classifieds
e-Edition
Our Sites
Extras
Share This
1 of 5 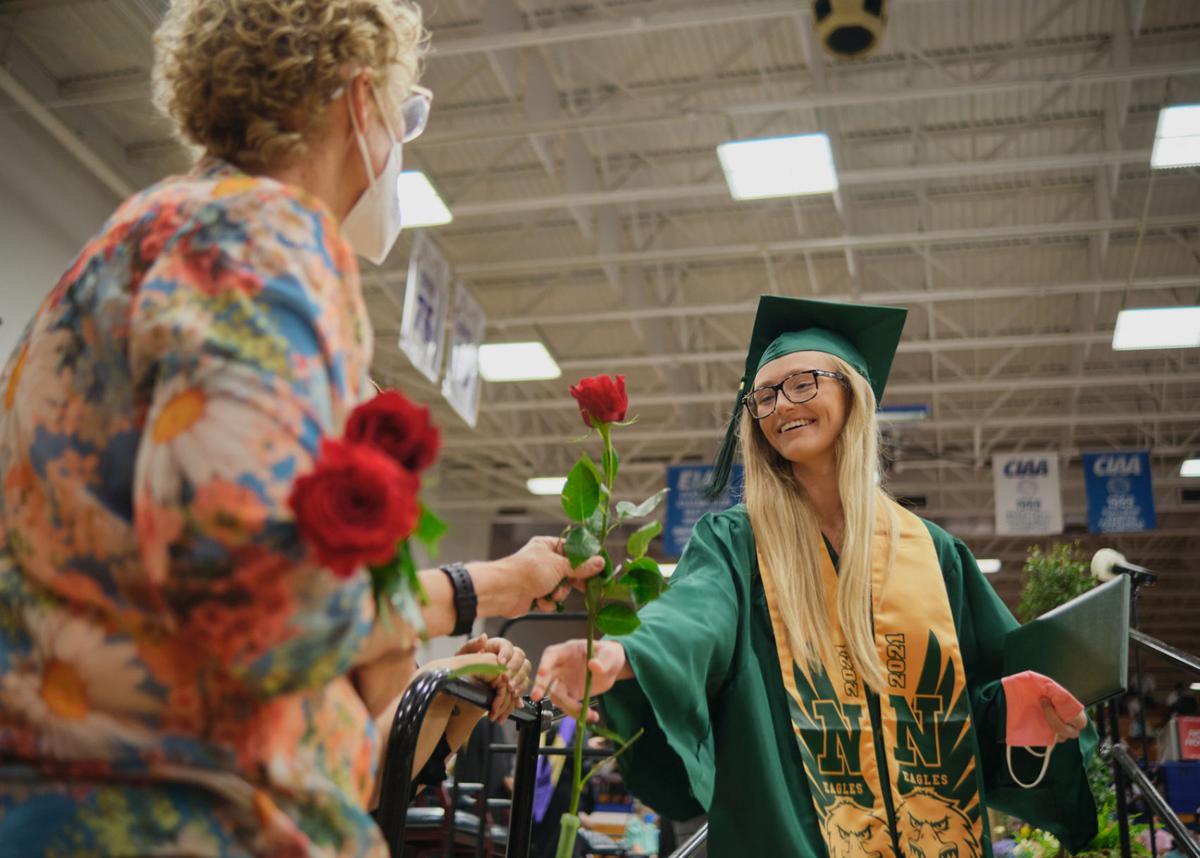 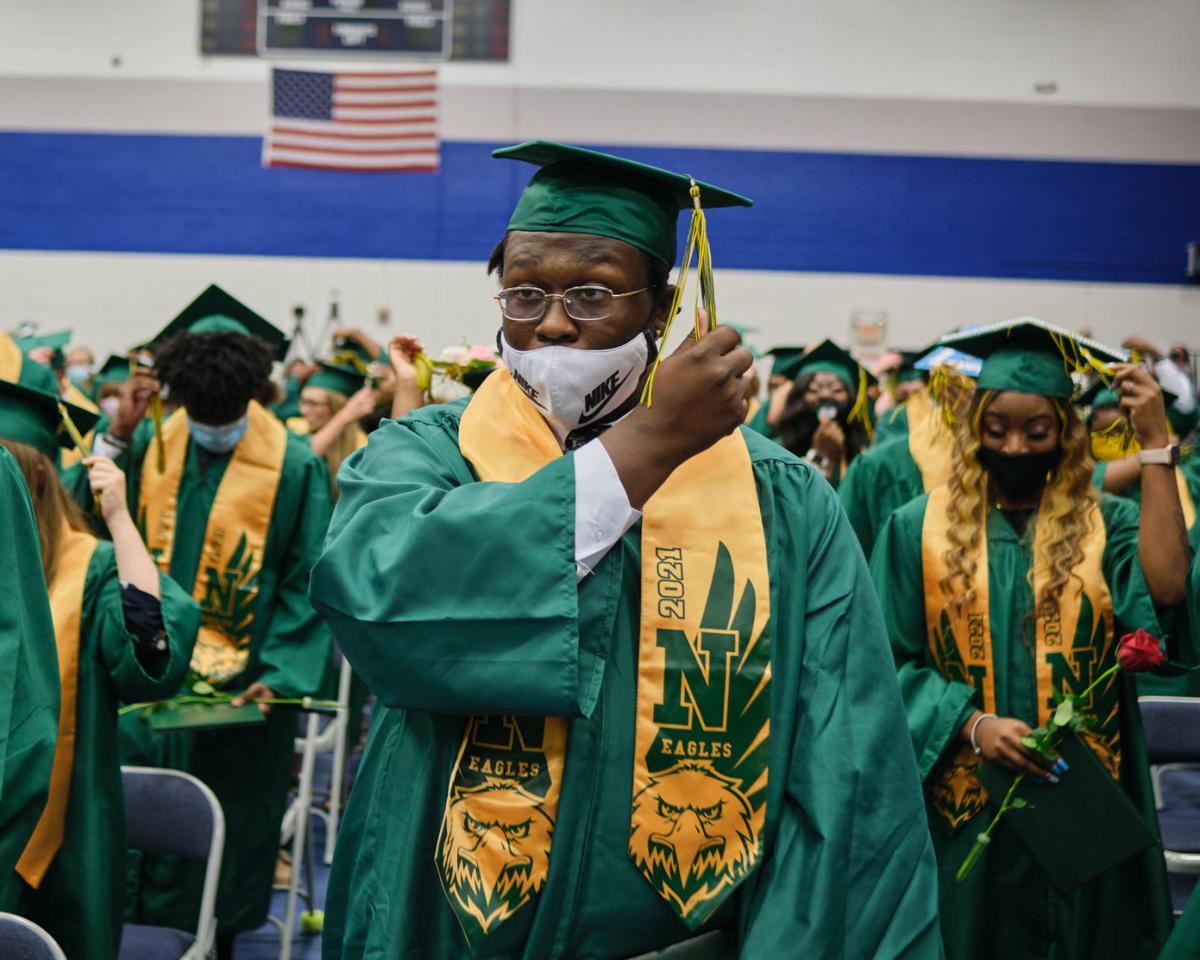 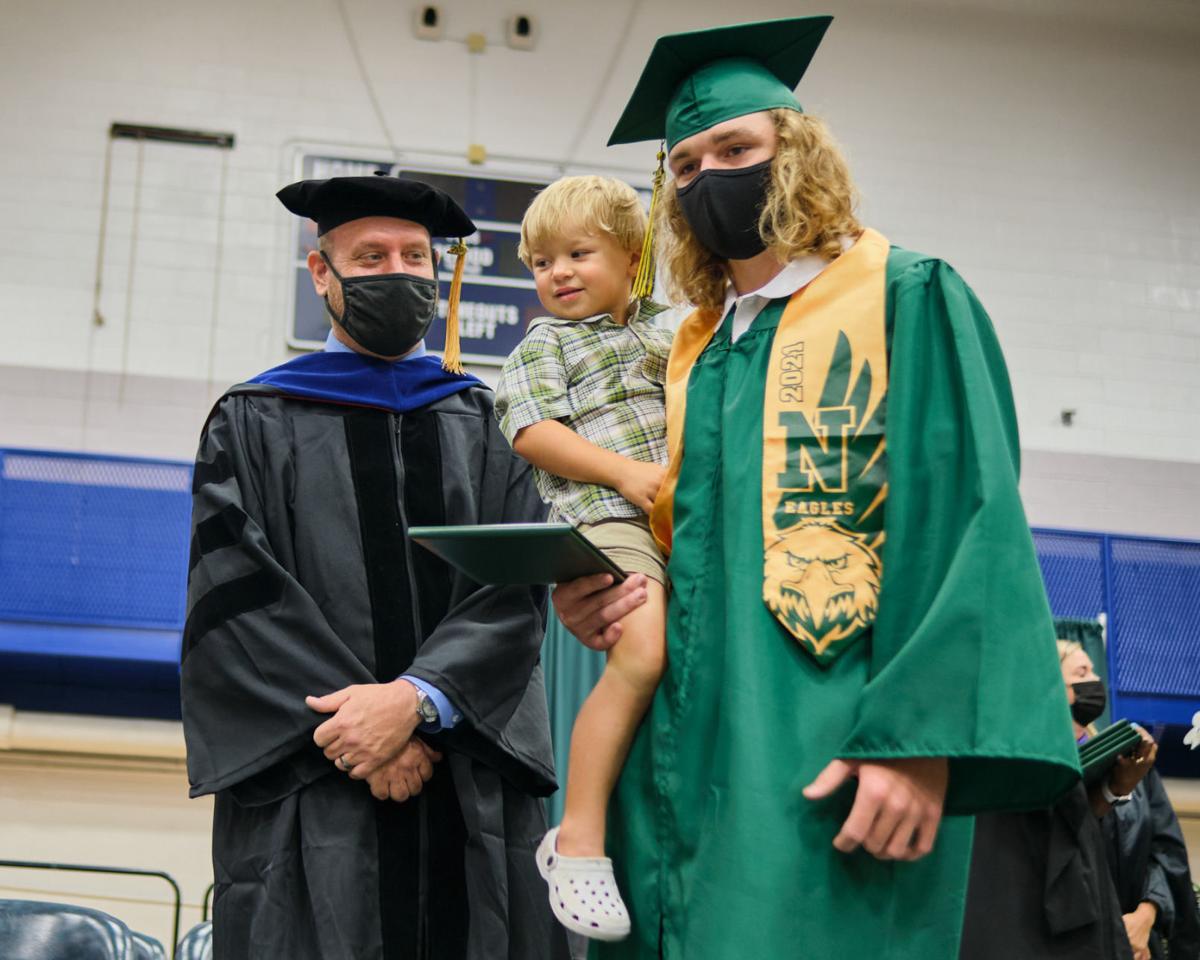 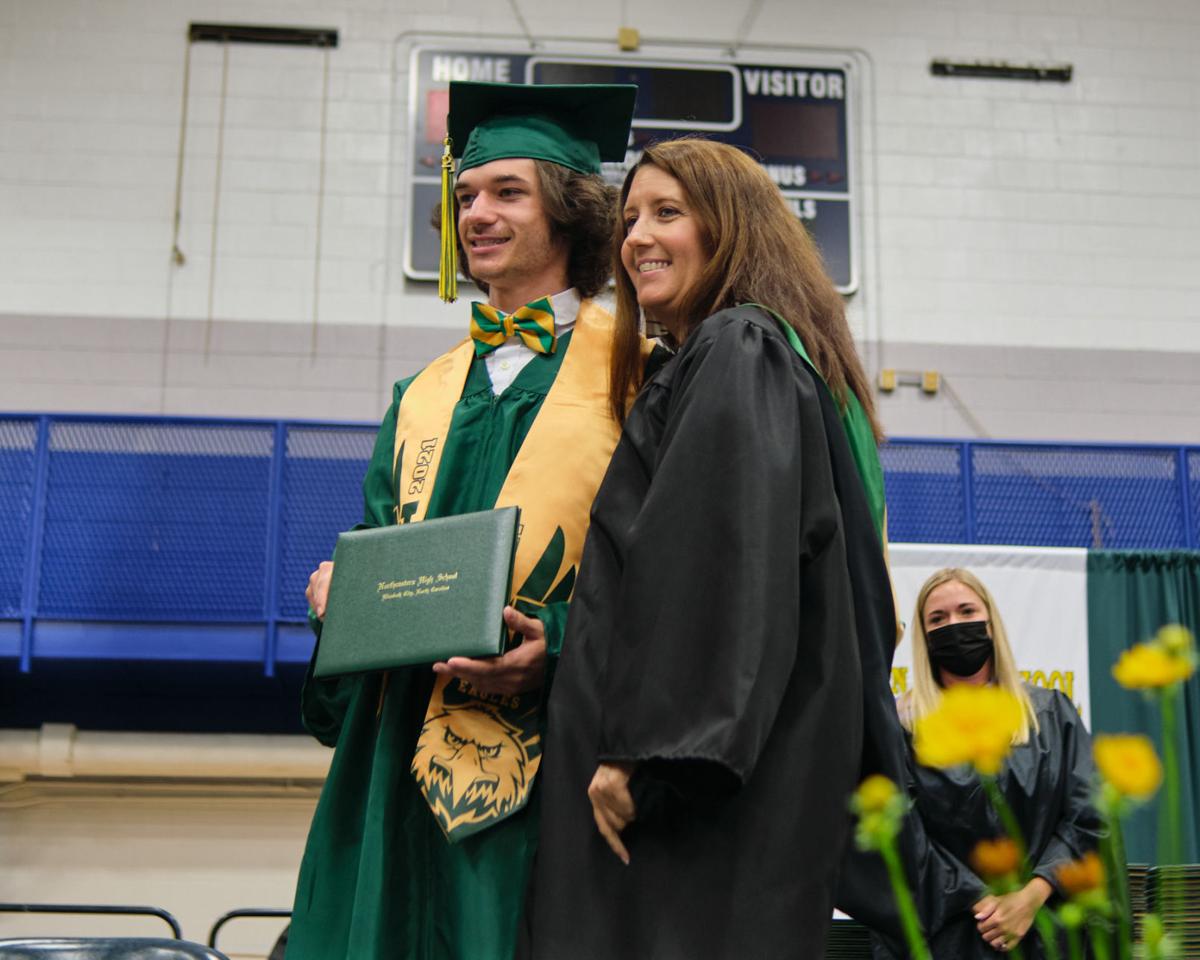 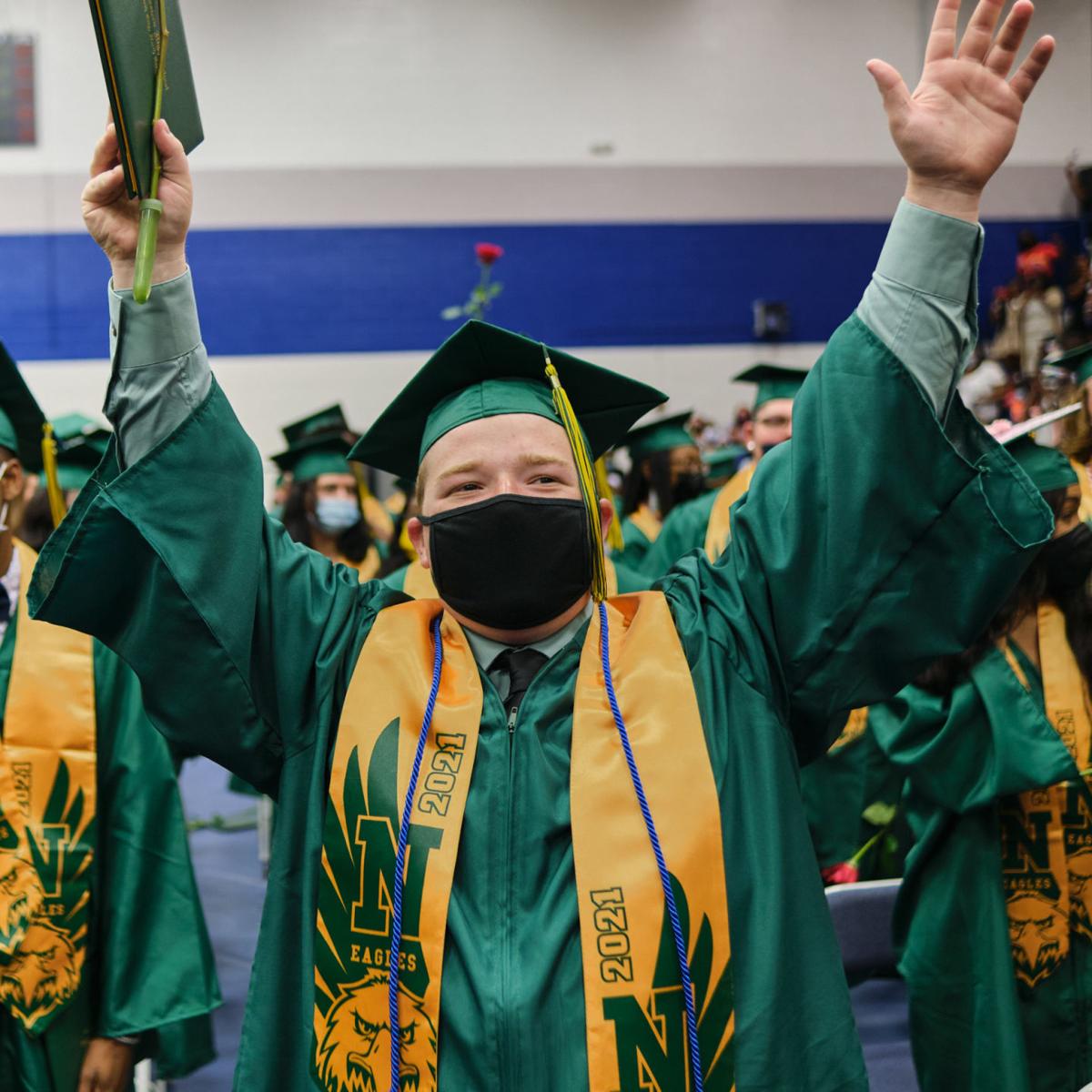 One is going to straight to work. Another is headed to college with hopes of one day becoming a teacher. Still another plans to attend training to learn how to become an electrical utility lineman.

Those are the plans of three of the 144 Northeastern High School graduates who received their diplomas in a ceremony held Saturday. The event marked the first in-person commencement since last year, when the pandemic forced school officials to film individual video diploma presentations to the class of 2020. The videos were compiled into one compilation film and presented to families before an outdoor celebration that was held in the school parking lot.

Saturday’s commencement was held in what appeared to be an at-capacity R.L. Vaughan Center on the campus of Elizabeth City State University. While most state-enacted COVID-19 restrictions have been lifted, all in attendance Saturday were required to wear facemasks.

Caleb Bowe, 18, said he is happy to have graduated and was looking forward to heading straight into the local workforce.

Brendan Byrum, 19, said he plans to continue working at B&S Enterprises in Elizabeth City, before eventually attending electric lineman training at a specialized academy in Nash County. When accepting his diploma, Byrum was joined on stage by his mother, Tammy Byrum, who also is a teacher at Northeastern.

Dyamond Lyles, 18, said she wants to become a teacher and is enrolling at ECSU this fall to study education.

“Thank you,” she said. “You are part of the mixture who made us who we are today.”

In August 2019, Grubb was beginning his junior year at Pasquotank High when he was killed in a vehicle accident. He was 16 at the time.

Smith, an 18-year-old Ahoskie resident, was shot and killed in late April, according to the Roanoke-Chowan News-Herald newspaper in Ahoskie.

Poyner looked to her classmates and said three words come to mind: resilience, strength and perseverance. She next listed several adversities she and her classmates faced in their final school year. Those challenges included the pandemic and having to adjust to virtual learning, and the social unrest that followed the April 21 shooting death of Andrew Brown Jr. by Pasquotank Sheriff’s deputies.

Despite those kinds of challenges, honor student Simeon Hurdle told the audience that he and fellow graduates agreed they were going to try to make their final school year as normal as possible.

“This year we have successfully had the full amount of classes, normal sports, senior awards and we are now having a full, in-person graduation,” Hurdle said to loud applause.

In his faculty address to graduates, school Athletic Director Ronald Nixon recalled how while growing up in Sawyertown, one of his chief responsibilities was to rake the leaves from his yard. The seasonal chore frustrated him at first, but he realized the trees were teaching him a life lesson, he said.

“That was to learn how to let some things go,” said Nixon, noting that regardless how many times he raked the leaves and put them in bags they were going to fall again next year.

“As you start your journey in life, whether you go to college, join the military, start working or whatever your heart may desire, always remember that this class’s journeys in life are like fingerprints, because they are all different,” Nixon said.

“As I look out at all of you, I see determination, an incredible and diverse range of talents so displayed here today right at this podium,” Soule said, referring to student speeches made earlier in the ceremony. “You have worked hard, very hard. To be here today you have completed 13 years’ worth of education. You’ve written papers; you’ve taken big tests; you had to juggle multiple responsibilities at once.”

Completing their final year of education during the pandemic — when students’ learning time was shifted from the classroom to their homes and back to the classrooms — taught the graduates valuable skills.

“You have learned how to adapt and to be resilient,” Soule said. “The skills you have gained in your perseverance will help you in your future career and in your life.”