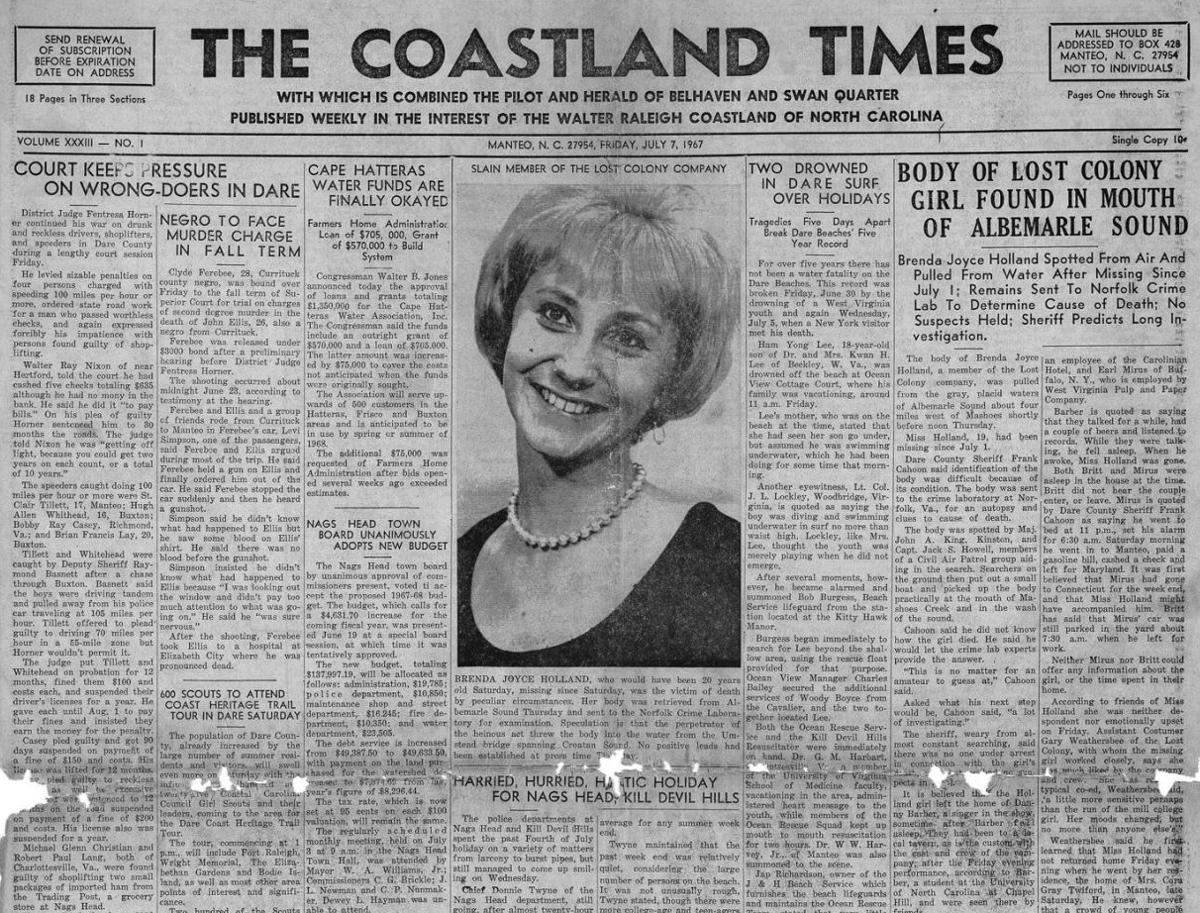 The above-fold section of the July 7, 1967 edition of The Coastland Times shows a photograph of Brenda Joyce Holland and a story about the discovery of her body in the Albemarle Sound. Holland’s murder, which has never been solved, is the subject of a new book. 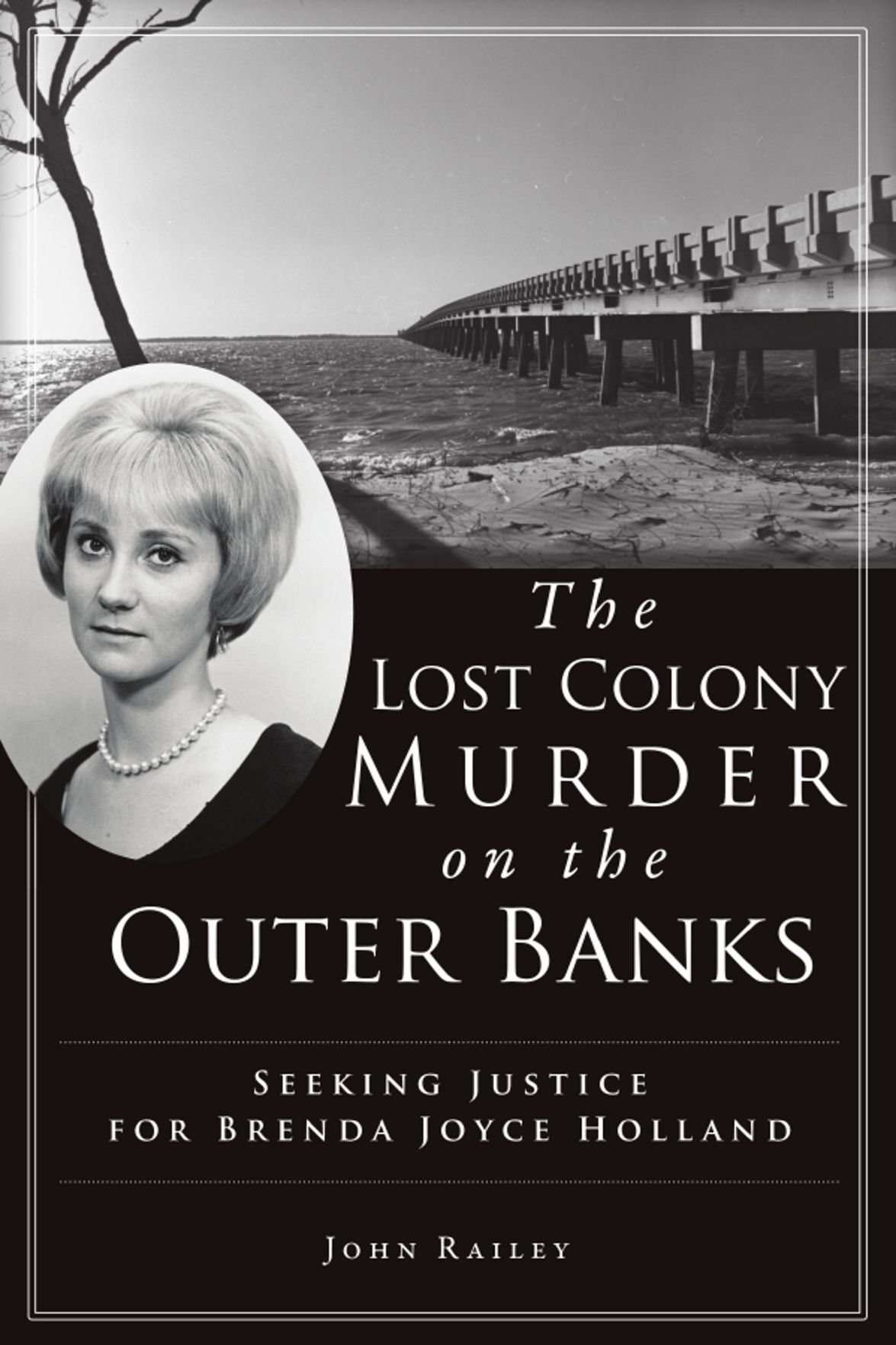 John Railey’s new book, “The Lost Colony Murder on the Outer Banks: Seeking Justice for Brenda Joyce Holland,” details the disappearance of Brenda Joyce Holland on July 1, 1967, and the subsequent investigation of her murder after her body was found floating in the Albemarle Sound five days later.

The above-fold section of the July 7, 1967 edition of The Coastland Times shows a photograph of Brenda Joyce Holland and a story about the discovery of her body in the Albemarle Sound. Holland’s murder, which has never been solved, is the subject of a new book.

John Railey’s new book, “The Lost Colony Murder on the Outer Banks: Seeking Justice for Brenda Joyce Holland,” details the disappearance of Brenda Joyce Holland on July 1, 1967, and the subsequent investigation of her murder after her body was found floating in the Albemarle Sound five days later.

One of North Carolina’s most famous unsolved murders is likely to stay that way.

On July 1, 1967, Brenda Joyce Holland vanished from Manteo and five days later the 19-year-old woman’s body was found floating in the Albemarle Sound near Mashoes.

John Railey, speaking via Zoom, told the audience for Museum of the Albemarle’s History for Lunch program Wednesday that law enforcement identified six main suspects during their investigation but none of them are still alive.

Railey is the author of the recently published book on the case called “The Lost Colony Murder on the Outer Banks: Seeking Justice for Brenda Joyce Holland.”

Holland was working as a make-up artist for the “Lost Colony” production the summer she disappeared and was murdered.

Another roadblock now is that the evidence collected during the early part of the investigation has been lost, which means there can be no DNA analysis. There is also no record of Holland’s autopsy, which was performed in Virginia.

Holland’s body was partially clothed when it was found and an autopsy determined the Canton native had been strangled, and possibly sexually assaulted.

Railey, a long-time journalist, became interested in the case in 2018 and started writing columns on Holland in the Coastland Times. He decided to write the book after COVID-19 hit.

Railey eventually received a copy of the State Bureau of Investigation file on the Holland case. It is 400 pages long and Railey said it was classified when he viewed it.

“It was fascinating, a suicide of a suspect, a séance, a supposed shallow grave, all set in the supposed summer of love in 1967,” Railey said.

Holland was a rising college junior when she came to Roanoke Island that summer to work for the “Lost Colony.”

One of the main suspects was a young man who went out on a date with Holland the night she disappeared. That suspect first told investigators that he had driven Holland home. He later changed his story, however, saying instead he had fallen asleep at his house.

“Perhaps something happened in the bedroom and perhaps he killed her during the course of that,” Railey said.

But it was later determined that Holland was probably walking the half-mile from her date’s home back to where she was staying when she disappeared.

Of the other five main suspects, Railey believes Holland only knew one of them: the roommate of the man she went out with the night she disappeared.

Railey said several of the suspects had “light” criminal records but one had been accused of being a Peeping Tom. The case against him, however, was dismissed.

“That put the spotlight on him,” Railey said. “There were some interesting records there.’’

Holland’s younger sister, Kim Holland Thorn, was 9 at the time of her sister’s murder. Also speaking to Wednesday’s audience by Zoom, she said the tragedy has haunted her family ever since.

Thorn said the family received updates from law enforcement on the status of the case for several years after it happened. But soon after the family never heard anything more about the case.

“That affected me greatly that nothing was ever done,” Thorn said. “Growing up, I knew something needed to be done. It was always on my mind.”

Almost 30 years after her sister’s murder, then Dare County Sheriff’s Deputy Buddy Tillett contacted Thorn to talk about the case.

“We immediately went to Manteo, which was my first time to go to Manteo,” Thorn said. “(Tillett) was always interested in it as he was raised in the area and now he was a law official.’’

“Buddy took it upon himself to re-enter the case,” Railey added. “He went through some hoops to do that.”

Tillett worked the cold case but could never identify Holland’s killer and Thorn said things “died down after that.”

Then in 2018, Thorn received a phone call from Railey.

“(Railey) said, ‘Can I talk to you about your sister, Brenda Holland?’” Thorn recalled. “I said, ‘Yes.’ I was willing to talk to anybody about the case. When he told me he was a journalist, I thought my heart was going to do flips.’’

That was start of what would eventually become Railey’s book on the Holland case.

“It was on from there and it was such a blessing to get her story told,” Thorn said, referring to her sister.

Railey makes an argument in the book for whom he thinks killed Holland. However, he told the History for Lunch audience Wednesday he “wasn’t going to give it away.”

“A lot of people have not read it,” Railey said of his book. “We make the case and we say in the end who we think did it. We did that after interviewing a lot of people inside and outside the case.”

Copies of Railey’s book are on sale at the Museum of the Albemarle.