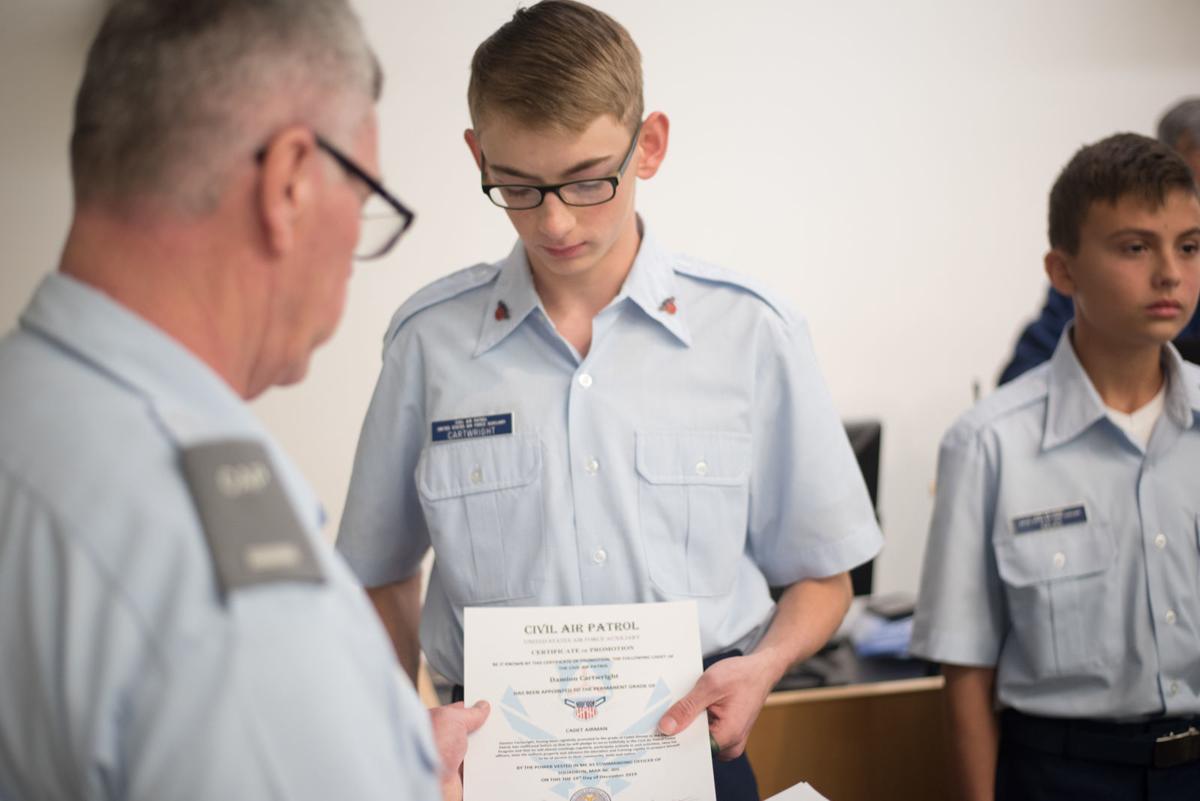 Damion Cartwright (center) receives his certificate of promotion to cadet from Ken King, commander of the Elizabeth City Civil Air Patrol Composite Squadron, during the local Civil Air Patrol’s promotion and awards ceremony at the STEM Complex at Elizabeth City State University, Thursday. Six cadets received promotions and almost a dozen of the squadron’s senior members were recognized during the event. 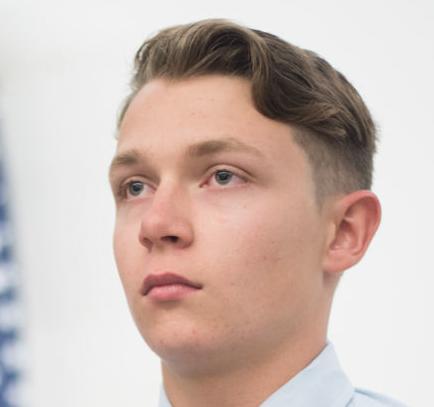 Back in the summer of 2018, it looked like the local Civil Air Patrol squadron was on the verge of conducting its last mission.

The squadron, whose members volunteer to help the U.S. Air Force with search and rescue missions, had few senior members and even fewer cadets. The situation was so dire, North Carolina Civil Air Patrol Wing Commander Jason Bailey was openly considering closing the Elizabeth City-based squadron.

“About a year and a half ago, I was worried about the squadron over here,” Bailey said last week. “The cadets were getting down to very little. We were doing our annual review of all the squadrons that we have to submit to the national office, and we were saying, ‘Are they a viable squadron or not?’”

But after meeting with its members, Bailey decided to give the squadron a chance to rebuild.

Bailey’s hunch was spot on. In just a matter of a few short months, the Elizabeth City Civil Air Patrol Composite Squadron has grown from one cadet to 10.

The turnaround was on full display Thursday night as the CAP Composite Squadron held a promotion and awards ceremony in the STEM Building at Elizabeth City State University. Six cadets received promotions and almost a dozen of the squadron’s senior members were recognized.

“Now, it is completely different from what we saw a year and a half ago,” Bailey said. “Some of the things that we see in thriving squadrons are occurring here. You have no idea how good it looks from where I am sitting.’’

Ken King, commander of the Elizabeth City squadron, credited Mike Mills, a teacher at Northeast Academy for Aerospace and Advanced Technologies, for helping recruit more cadets to the program.

“(Mills) has been an exceptional supporter of the Civil Air Patrol who has brought us six new cadets,” King said at Thursday’s ceremony. “We had one cadet, we are now up to 10 participating cadets. That is phenomenal and I love it.”

Mills was promoted to senior member during Thursday’s ceremony.

Also at Thursday’s ceremony, Cadet 1st Lt. Ronald “Beau” Smith received the Veterans of Foreign Wars Award and he earned the Amelia Earhart Award, which is one of the highest honors in the cadet program. Smith recorded his first solo flight last summer and is currently working toward getting his pilot’s license.

“This is one of the biggest ceremonies that we have had in several years,” said local CAP public affairs officer Maj. Rod Cushing. “We have folks in our squadron that come all the way from Columbia, North Carolina, but most of them are in the Elizabeth City area.’’

Dan Serik of Post 6060 of the Veterans of Foreign Wars presented Smith and Geffert both a certificate and a pin honoring their service. He praised all the cadets in the CAP.

“This is a program that promotes American values, leadership, good citizenship, whether it be in public life or military life,” Serik said. “That is very important to us at the VFW. We strive to promote these same values in young people, especially in these times. A salute to the parents for bringing them to this program before the college professors get to them.”

King also praised the work of Deputy Commander Lt. Colonel Art Dammers and his work with the cadet program.

“Lt. Colonel Dammers makes sure the cadets are progressing on a daily basis,” King said. “Testing when they should. Doing their PT (physical training) and drills as they should and when they should. Three short months ago, we didn’t have what we have. Now, here they are being promoted up. Senior member Mills recruited them but Lt. Col. Dammers has put in the work to get them where they are today.’’

King said being able to meet in the STEM building at ECSU has also had a positive impact on the squadron. CAP used to meet in the National Guard Armory.

“Trust me, you wouldn’t want to have this ceremony in the armory,” King said. “We were looking for a place to hang our hat because where we were meeting was not all that conducive to holding a proper meeting, or a safe meeting. We have some nice digs now.”

The Civil Air Patrol is an auxiliary of the U.S. Air Force and has 60,000 volunteer members across the country. The three primary functions of the CAP are: emergency service, which includes search and rescue; overseeing cadet programs; and providing aerospace education throughout the state.