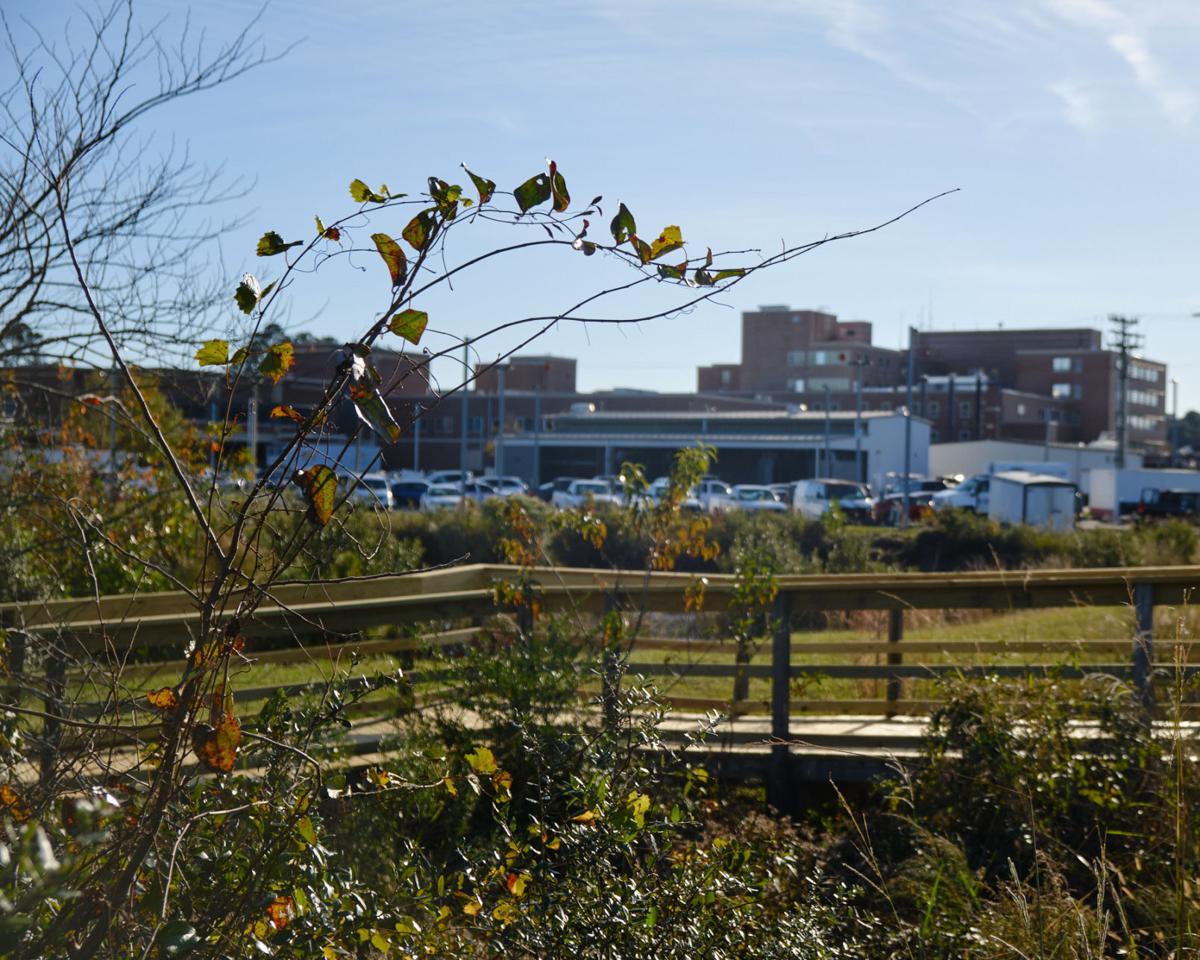 The rear of Sentara Albemarle Medical Center is seen from the wetlands boardwalk behind College of The Albemarle, Thursday. Pasquotank County officials say the current hospital property, which fronts the Pasquotank River, could be redeveloped for commercial use once Sentara Healthcare builds its new hospital in 2024.

The rear of Sentara Albemarle Medical Center is seen from the wetlands boardwalk behind College of The Albemarle, Thursday. Pasquotank County officials say the current hospital property, which fronts the Pasquotank River, could be redeveloped for commercial use once Sentara Healthcare builds its new hospital in 2024.

When Sentara Albemarle Medical Center moves into its planned new hospital across town sometime in 2024 the current county-owned hospital may be torn down and the property redeveloped for commercial use.

That’s one of the options county officials are considering for the property in the wake of Sentara Healthcare’s announcement this week it plans to build a new $158 million state-of-the-art hospital near Halstead Boulevard Extended and Thunder Road.

The new 110-bed facility will replace the current Sentara Albemarle Medical Center on North Road Street that the hospital has been leasing from the county and operating since 2014.

Once the new SAMC opens the county will retain ownership of the current 60-year-old hospital facility. Plans for redeveloping the site could include tearing down the current hospital to make way for a mixed-use development of residential and commercial units.

Commissioners have not yet even begun considering what the county will do with the property but County Manager Sparty Hammett said turning the county-owned hospital building into condos or apartments may not a viable option.

“We will look at that,” Hammett said of converting the building into residential units. “But, typically you don’t see old hospitals being converted into condos because the way they are structured. In all likelihood, we will have to clear that property.”

Board Vice Chairman Lloyd Griffin said he did not know if the county would end up tearing down the current hospital.

“That is one of the things we will talk about this winter when we have our retreat,” Griffin said. “We are still four years away so there is time to plan on what can be done with it.’’

The North Road Street site is almost 75 acres but 40 acres of it is wetlands. One attractive part of the site is that is has 3,500 feet of shoreline along the Pasquotank River.

“It’s a prime location for a mixed-use development that would include commercial and residential development,” Hammett said. “I envision some higher-end residential there, maybe condos, maybe some apartments. We are excited about the potential of the existing hospital.”

Griffin said it is important to get the property on the tax books.

“A mixed use to get it back on the tax books would be good,” he said.

Elizabeth City-Pasquotank County Economic Development Commission Director Christian Lockamy believes the site should be marketed as a waterfront site. He envisions different types of development from the riverfront back to the North Road Street portion of the property.

“It needs to be looked at as a waterfront site,” Lockamy said. “Many communities, not only ours, turn their backs to the river for development. It’s going to take vision and strong elected leaders to get onboard and behind redeveloping waterfront properties.’’

Lockamy called the current hospital site a “strategic development opportunity” for the county and believes the county should look for taxable investment at the location.

“Our community has too pretty a waterfront to ignore that,” Lockamy said. “There are a lot of developers, from my perspective, that would be interested in that property.”

“There are some other tracts of land that I imagine you will see fill out,” Lockamy said. “The new hospital is going to be a significant driver of trips per day along that corridor.”