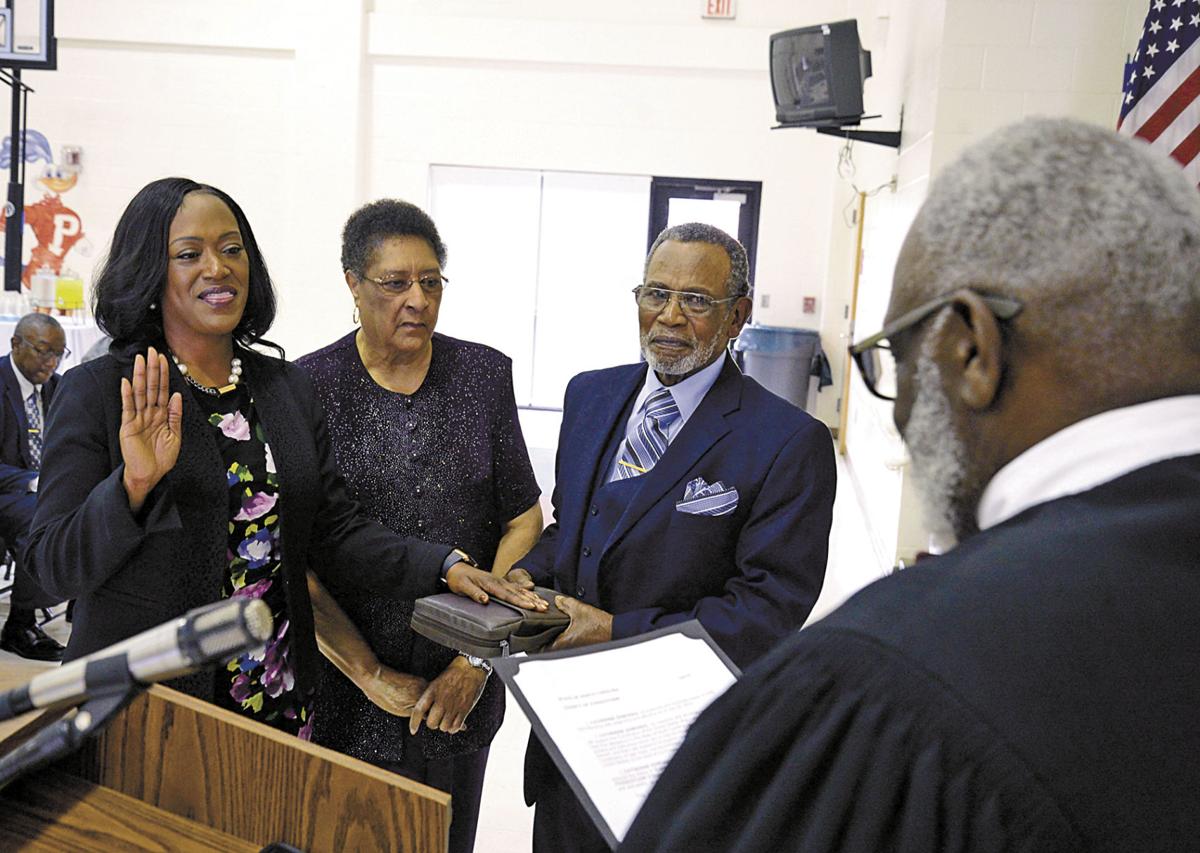 New Elizabeth City-Pasquotank Public Schools Superintendent Catherine Edmonds is sworn into office by Judge J.C. Cole during a ceremony at Pasquotank Elementary School, Monday. Holding the bible is Edmonds’s father, Weldon Edmonds, and in the middle is her mother, Novella Edmonds. 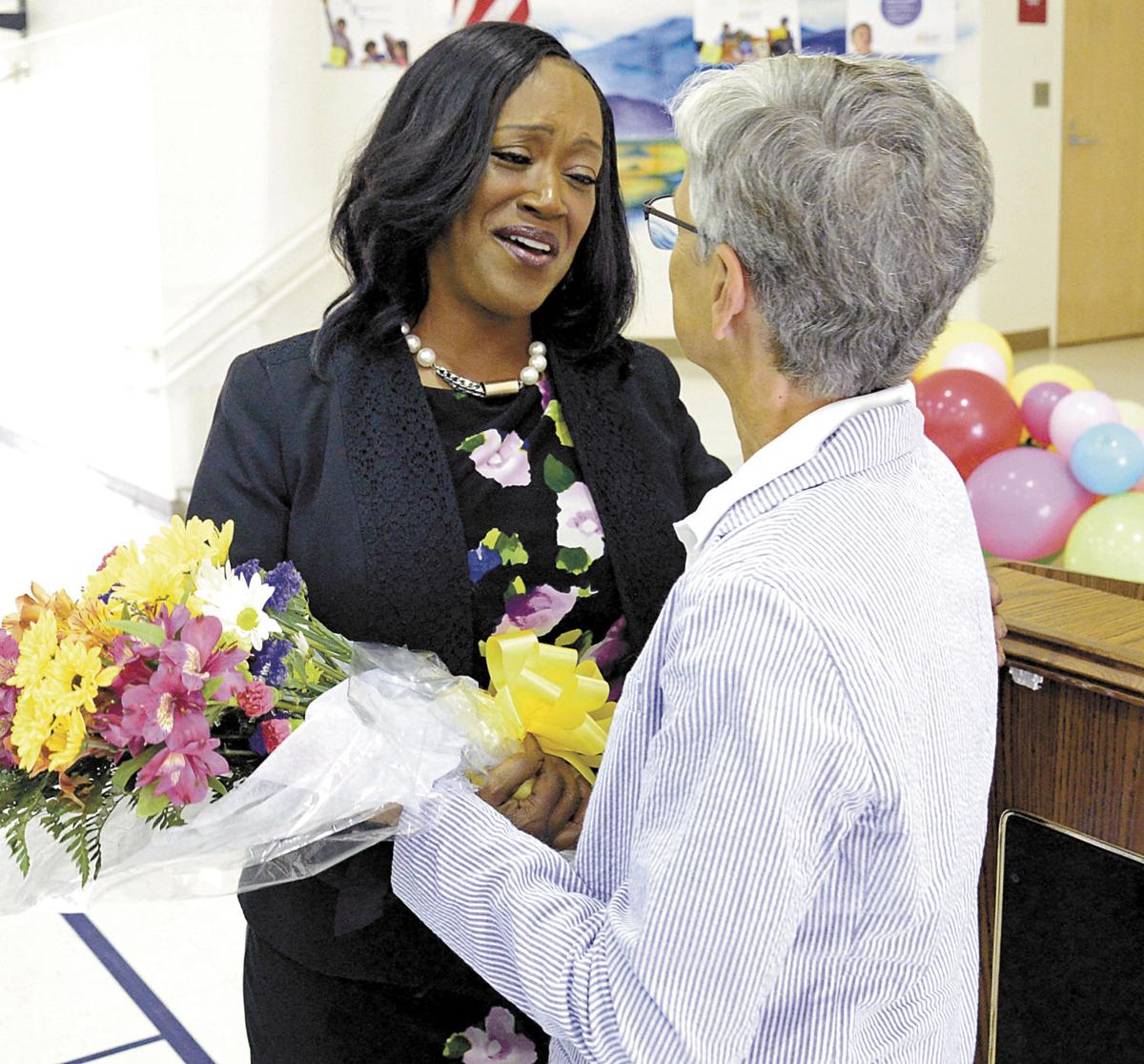 New Elizabeth City-Pasquotank Public Schools Superintendent Catherine Edmonds is sworn into office by Judge J.C. Cole during a ceremony at Pasquotank Elementary School, Monday. Holding the bible is Edmonds’s father, Weldon Edmonds, and in the middle is her mother, Novella Edmonds.

An enthusiastic crowd of 170 or so welcomed Catherine Edmonds as the new superintendent of the Elizabeth City-Pasquotank Schools at a swearing-in ceremony and reception Monday afternoon.

Board of Education Chairwoman Sharon Warden remarked after the ceremony that she was pleased with the turnout and with the crowd’s enthusiasm.

“We’ve got to maintain this,” Warden said of the high level of energy at the event.

Edmonds told the audience that even though some things will change as she begins her service as superintendent, many things will not change because there are already great things happening and great people in place.

Edmonds, whose oath of office was administered Monday by Superior Court Judge J.C. Cole but is effective July 22 when her term of service begins, said she looks forward to serving the schools district and collaborating with people in the community.

She thanked the school board for its confidence in her and said she does not take the oath of office lightly but will always serve to the best of her ability.

“I am very open to hearing any feedback that you have for us,” Edmonds said.

Edmonds thanked interim Superintendent Rhonda James-Davis for her leadership during the transition.

Warden told the audience she was “delighted and excited” to be sharing with the public in “an exceptional moment” as a “woman of distinction” takes the oath of office as superintendent.

Edmonds is exceptional for her work ethic and commitment to collaboration and communication, Warden said.

It is believed that Edmonds is the first woman to serve as superintendent of schools in Pasquotank County at least since the consolidation of city and county schools into a single district in the 1960s.

Elizabeth City State University Chancellor Karrie Dixon said in an interview after the ceremony that she had made it a priority to attend the ceremony, which she considered an important event for the community.

“This is exciting,” Dixon said, noting the attendance and the enthusiasm of guests at the event, which was held in the multi-purpose room at Pasquotank Elementary School.

Dixon said she knows Edmonds’s work from the time Edmonds spent with the University of North Carolina System as director of educational leadership and development and director of the NC Principal Fellows Program.

“I know that she is going to do great things here,” Dixon said.

The chancellor said she looks forward to building a stronger collaboration between ECSU and the local school district that will benefit the students in Pasquotank County.

“With Catherine’s leadership I know we’re going to be able to do that,” Dixon said.

In comments during the ceremony, Pasquotank Board of Commissioners Chairman Jeff Dixon welcomed Edmonds to the post.

“We are delighted to have you as our next superintendent of our district schools,” Dixon said.

Dixon said he already had sensed Edmonds’s enthusiasm for educating children. He said county officials will work with her to make ECPPS one of the best school districts in the state.

County officials will strive to provide the necessary funding to make that happen, he said.

Elizabeth City Mayor Bettie Parker described the ceremony as “an historic moment,” noting it was a first for a woman to be named superintendent of the school district.

Edmonds’s parents, Weldon and Novella Edmonds, were on hand for the occasion, as were her sisters Pamela Foster, Sandra Edmonds-Thorpe and Valerie Williams.

Edmonds began her career as a teacher in Granville County in 1992. She served as an assistant principal and principal in the Granville district until 2006 when she became the program director for the North Carolina New Schools Project.

She has been instructional improvement officer for the Guilford County Schools and both a district transformation coach team leader and Halifax leader for the N.C. Department of Public Instruction.