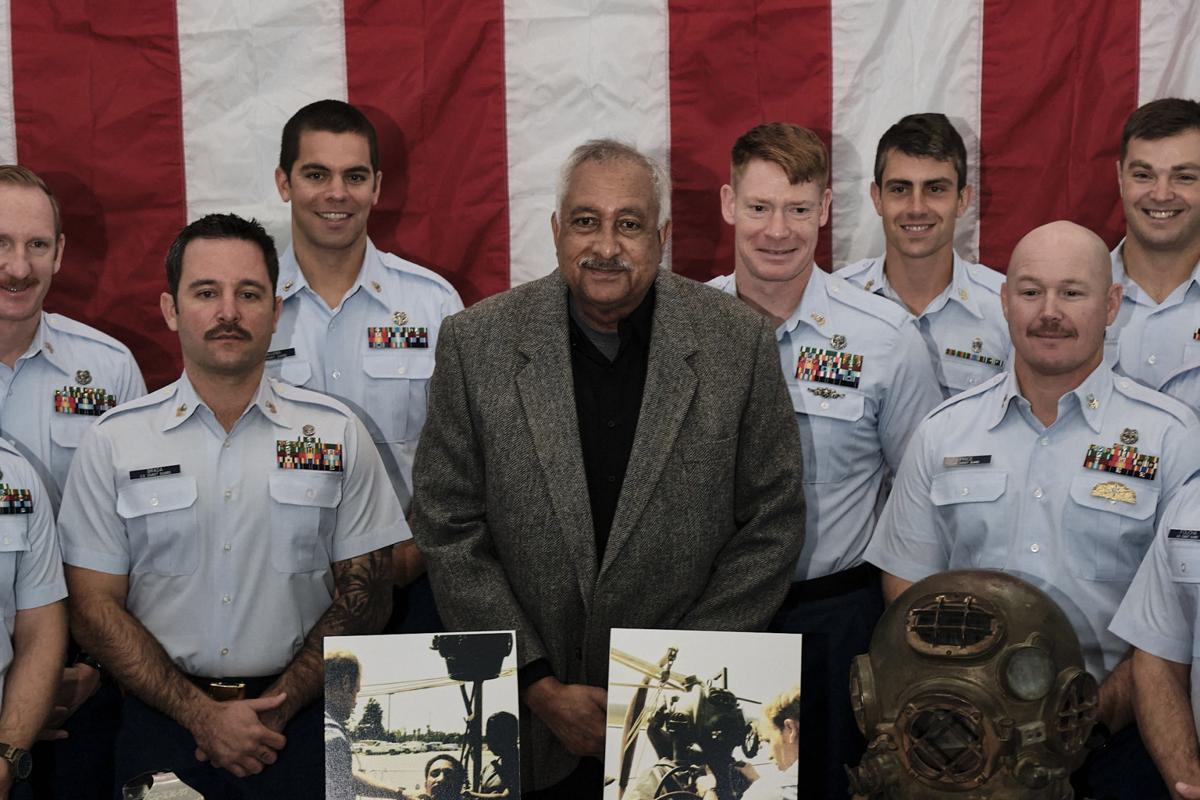 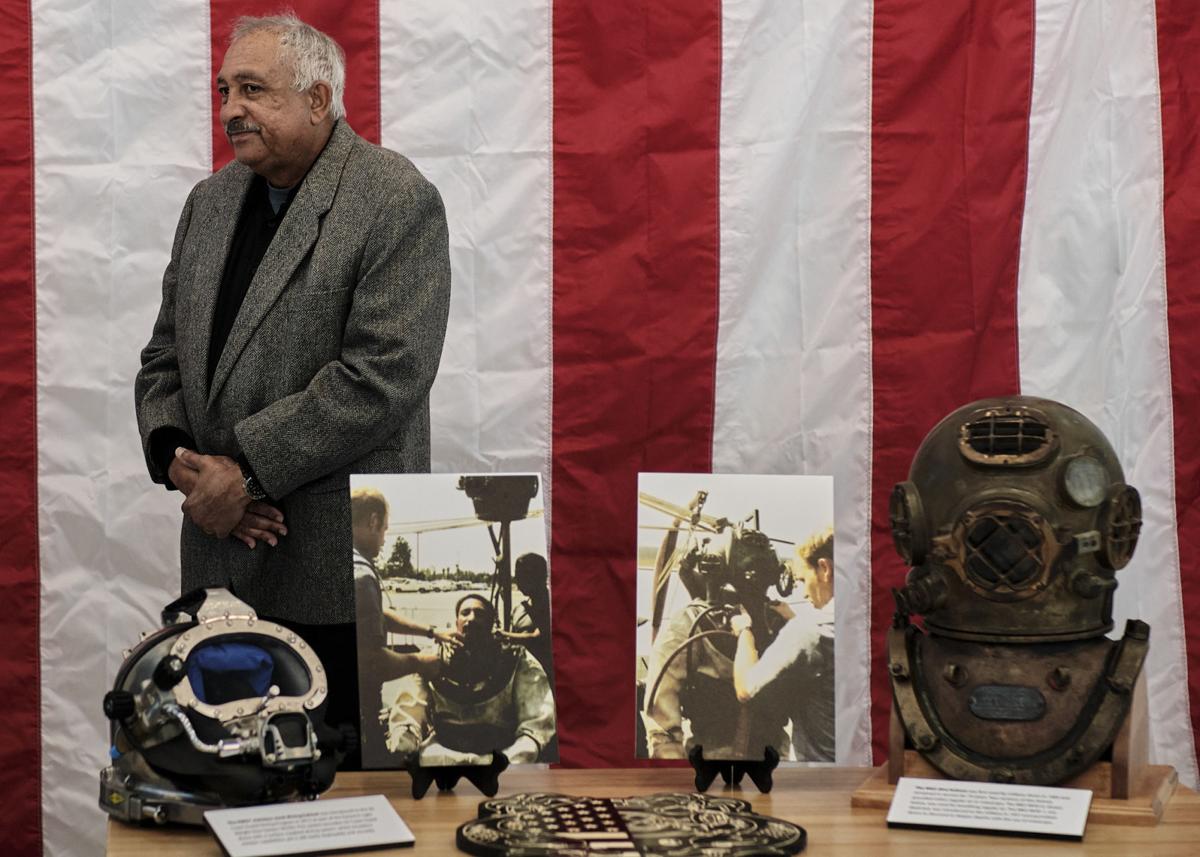 Ralph Berry, the U.S. Coast Guard's first African American diver, was honored at a ceremony held at Base Elizabeth City, Tuesday. Berry grew up in Manteo and enlisted in 1974. He completed dive training in 1979. 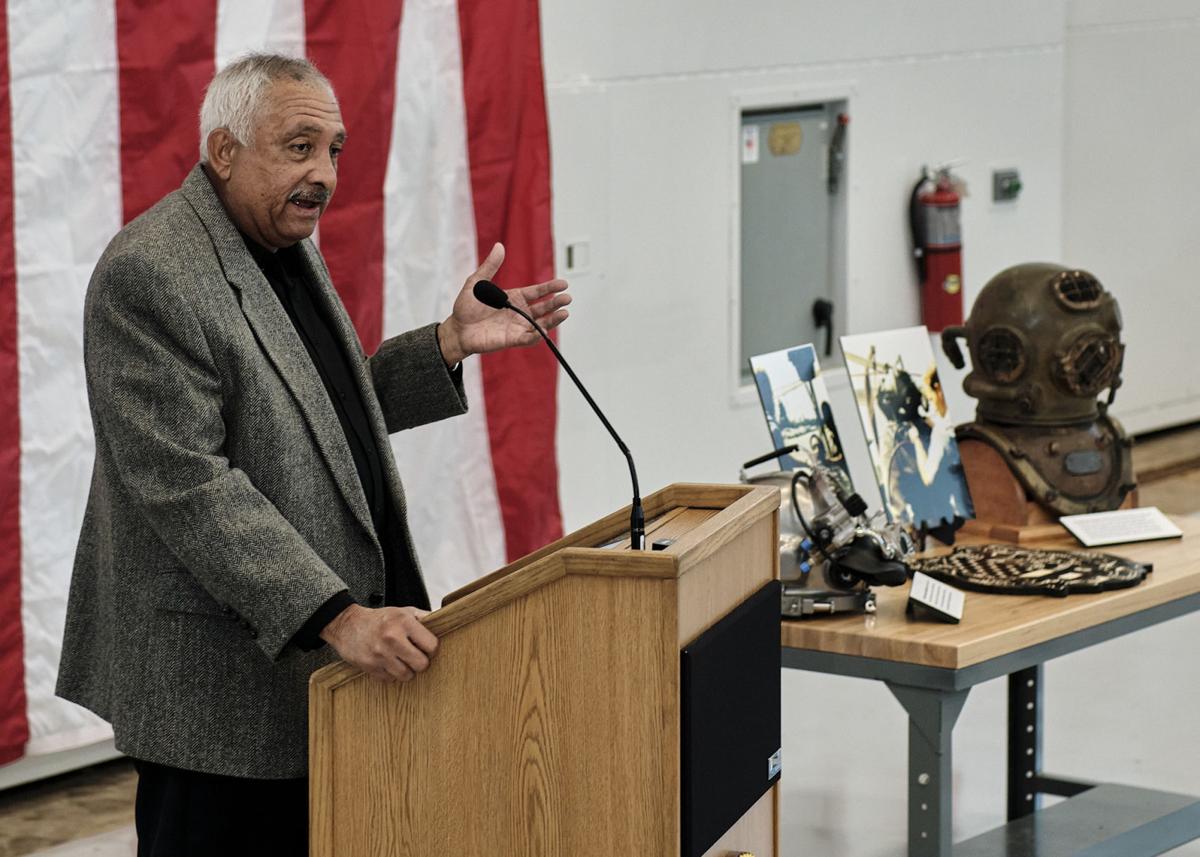 Ralph Berry, the U.S. Coast Guard's first African American diver, speaks at a ceremony held in his honor at Base Elizabeth City, Tuesday. Berry grew up in Manteo and enlisted in 1974. He completed dive training in 1979.

Ralph Berry, the U.S. Coast Guard's first African American diver, was honored at a ceremony held at Base Elizabeth City, Tuesday. Berry grew up in Manteo and enlisted in 1974. He completed dive training in 1979.

Ralph Berry, the U.S. Coast Guard's first African American diver, speaks at a ceremony held in his honor at Base Elizabeth City, Tuesday. Berry grew up in Manteo and enlisted in 1974. He completed dive training in 1979.

Ralph Berry, who would go on to become the U.S. Coast Guard’s first Black diver, dates his interest in diving to an old television show.

“On Saturdays a show would come on called Sea Hunt,” Berry, who grew up in Manteo, said Tuesday. “It was with actor Lloyd Bridges.”

“Sea Hunt” aired from the late 1950s to the early 1960s and featured Bridges as scuba diver Mike Nelson. That was at a time when the history of scuba diving was still fairly young.

Berry recalled watching Bridges decked out in his scuba gear and going on undersea adventures and thinking diving was something he’d like to try.

On Tuesday, the U.S. Coast Guard paid tribute to Berry, honoring his legacy during an hour-long event at the Aviation Technical Training Center’s Aviation Training Facility. Among those in attendance besides members of Berry’s family were more than a dozen current Coast Guard divers.

Born and raised in Manteo, Berry said he had hoped to play basketball at Elizabeth City State University. Instead, he enlisted in the Coast Guard in 1974 and attended school to become a machinery technician.

Before his first enlistment was set to end he learned the Coast Guard was seeking candidates for dive training. Still inspired by the adventures of diver Mike Nelson, Berry applied to dive school and after re-enlisting received his orders to the U.S. Navy’s Dive and Salvage Center in Panama City, Florida.

“I didn’t do it just to be the first Black diver,” he said. “I did it because it was something I wanted to do.”

Berry spent several more years in the Coast Guard and participated in several dive operations, including a dive on the Coast Guard’s Cutter Blackthorn. The Blackthorn was a 180-foot buoy tender that sank in Tampa Bay after colliding with a 600-foot tanker in January 1980. Twenty-three members of the Blackthorn died in the accident.

Berry said Tuesday that working deep underwater had always been much easier for him than speaking publicly.

“I feel more comfortable 60 feet under the ocean than I do talking to y’all right now,” he said.

Capt. Brian Hopkins, the ATTC commanding officer, spoke briefly before Berry was presented a certificate thanking him for his service.

“Today we’re going to commemorate a piece of Coast Guard history and quite frankly, a piece of American history,” Hopkins said.

Hopkins recognized several of the Coast Guard divers in the audience, many of whom are assigned to ATTC.

“Now I mention these individuals by name because they embody what I would call the Coast Guard dive community,” Hopkins said. “And Mr. Berry, they embody a culture that you helped to build.”

The Coast Guard’s diving community is culture of commitment, professionalism and courage, the captain said.

“And Mr. Berry, you are a part of that diving community,” Hopkins said. “And I assure you that the character that you demonstrated in your career and the culture that you formed through your commitment, through your professionalism and, most importantly, through your courage that that culture is still alive and well in these service members today. Your legacy lives on and we thank you for that.”

Also speaking Tuesday was retired Coast Guard Capt. Dwight Meekins, who spent his career in aviation. Meekins said he believed that Berry’s family instilled in him the values that made him successful in the Coast Guard.

“I believe that honor, respect and devotion to duty were bred into Ralph even before he began dive training,” Meekins said.

“It was 13 weeks long at the time that he went through,” Meekins said. “Thirty-five candidates started the program with Ralph. Thirteen finished.”