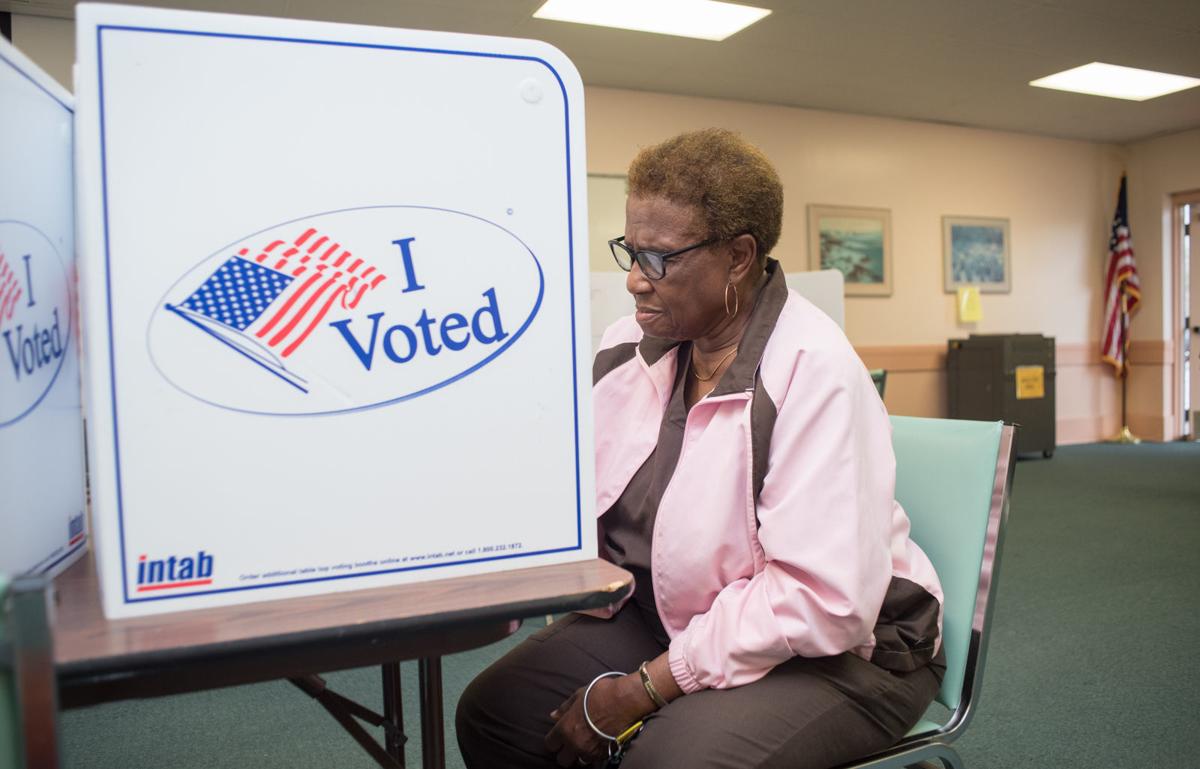 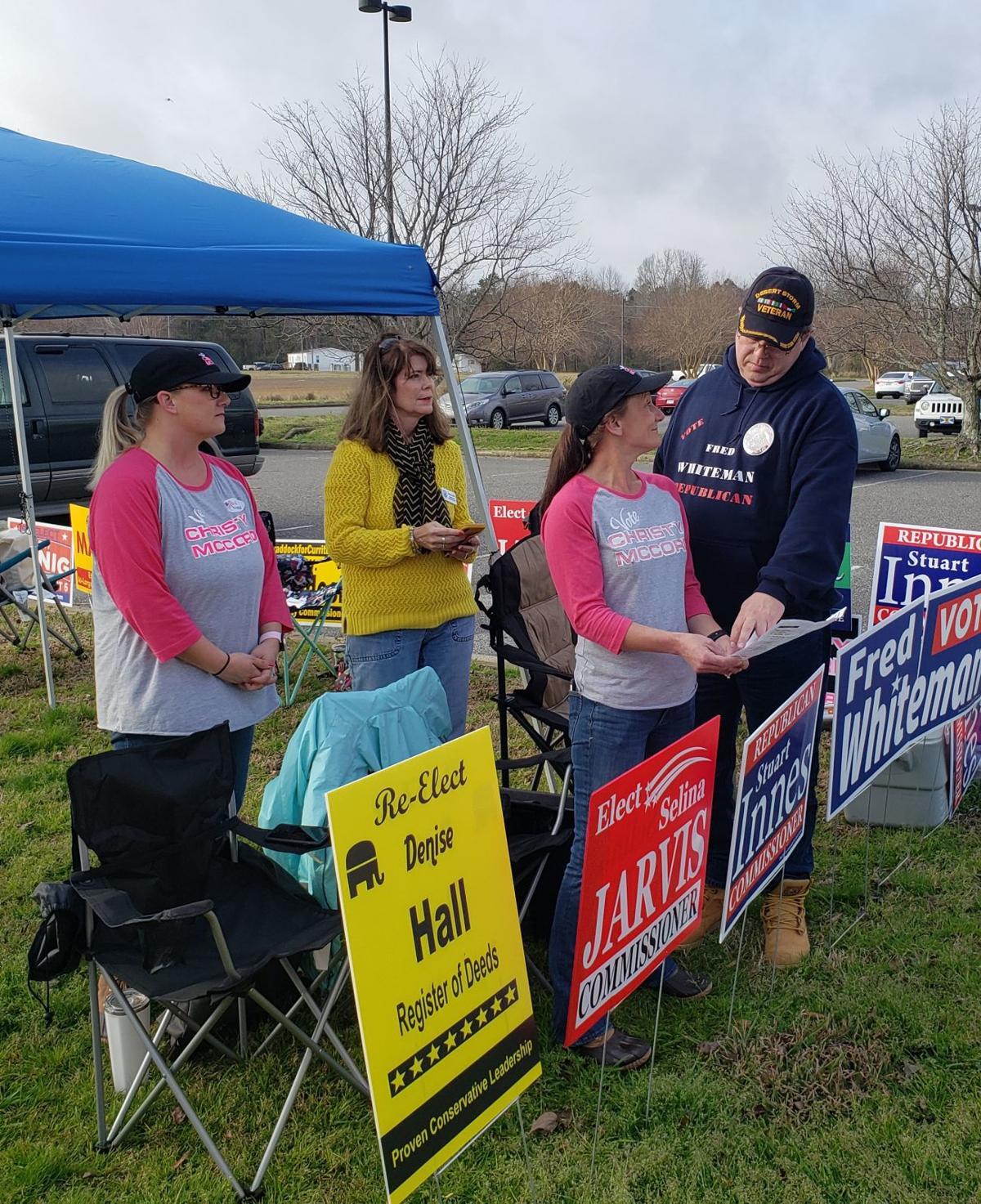 The first day of early voting for next month’s primary election in North Carolina got underway on Thursday with more than 350 area voters casting ballots by late afternoon.

Voter turnout for the March 3 primary was highest in two counties: Pasquotank and Currituck, where 127 and 104 voters, respectively, had cast ballots as of 5 p.m. More ballots were expected later on in Currituck, where the Board of Elections Office planned to remain open until 7:30 p.m.

Turnout was slow in three other counties, meanwhile.

Only 53 voters cast ballots in Chowan County on Thursday, according to Director of Elections Terrence Meyers.

Meyers said he expected turnout to pick up but then it started raining Thursday afternoon.

Like Currituck’s office, Chowan’s elections office was scheduled to remain open for early voting until 7:30 p.m.

Forty-one voters cast ballots in Camden, which was “slow” for the first day of early voting, Director of Elections Elaine Best said.

In Perquimans, turnout was only 38, which Elections Director Holly Hunter agreed was slow for the first day.

Voters from both major parties are casting primary ballots in the March 3 election for president, U.S. Senate and most state Council of State offices. There are also contested state House races in the 5th and 6th districts.

All area counties also have at least one contested local race on the ballot. Currituck, however, has four: three contested races for county commissioner and a contested race for register of deeds.

“We had a couple of people at the door at 7:55 a.m.,” Currituck Board of Elections Director Syndi Banks said, referring to the high interest.

In Pasquotank County, Emma Tate was supervising her first election as interim elections director. Tate was named interim director by the Pasquotank Board of Elections following the resignation of former director Kelli Price. Price’s last day with the elections office was Feb. 7.

Tate said Price’s departure a week before the start of early voting had not affected the office’s operations on Thursday.

“Everything is running like it should. We’re fully staffed,” said Tate, who joined the elections office last July as deputy director.

A couple of voters in Pasquotank shared their thoughts about candidates on the primary ballot.

Larry Brown, 68, a Democrat who lives in Providence Township, said he voted for Keith Rivers in the 5th District state House race and for Joe Biden for president.

Brown said he is concerned about the need for improved water and sewer infrastructure in rural areas of Pasquotank.

He said he voted for Rivers because he thinks the challenger to state House Rep. Howard Hunter, D-Hertford, will support improvements that are needed in Pasquotank and the two other counties, Hertford and Gates, in the 5th District.

Health care and the protection of Medicare and Medicaid are important issues “now that I am a senior citizen,” Brown said.

Brown said he voted for Biden because he values his experience as a former U.S. senator and vice president for President Barack Obama.

“He’s solid,” Brown said of Biden. “He’s been in the government. He knows what to do. He has been through wars, he has passed laws, and he has talked to foreign governments.”

One of those casting a ballot in the Republican primary in Pasquotank Thursday was Gary White, 62, a former county commissioner who lives in the Weeksville area. White served on the board of commissioners as a Democrat but changed his registration to Republican in November 2019.

White said he voted for Mark Robinson for lieutenant governor because he is conservative and visited the area ahead of the primary.

He voted for Dan Forest for governor.

“I think it’s absolutely critical that the people of North Carolina remove Roy Cooper from public office and I think (Forest) is the one to do it,” White said.

Currituck Board of Elections Chairman B. Gary McGee said Sunday voting was proposed as a way to give voters another chance to cast their ballot.

“It was to increase the hours people are allowed to vote since a lot of people work on Saturday,” McGee said. “Sunday is a day most people don’t work.”