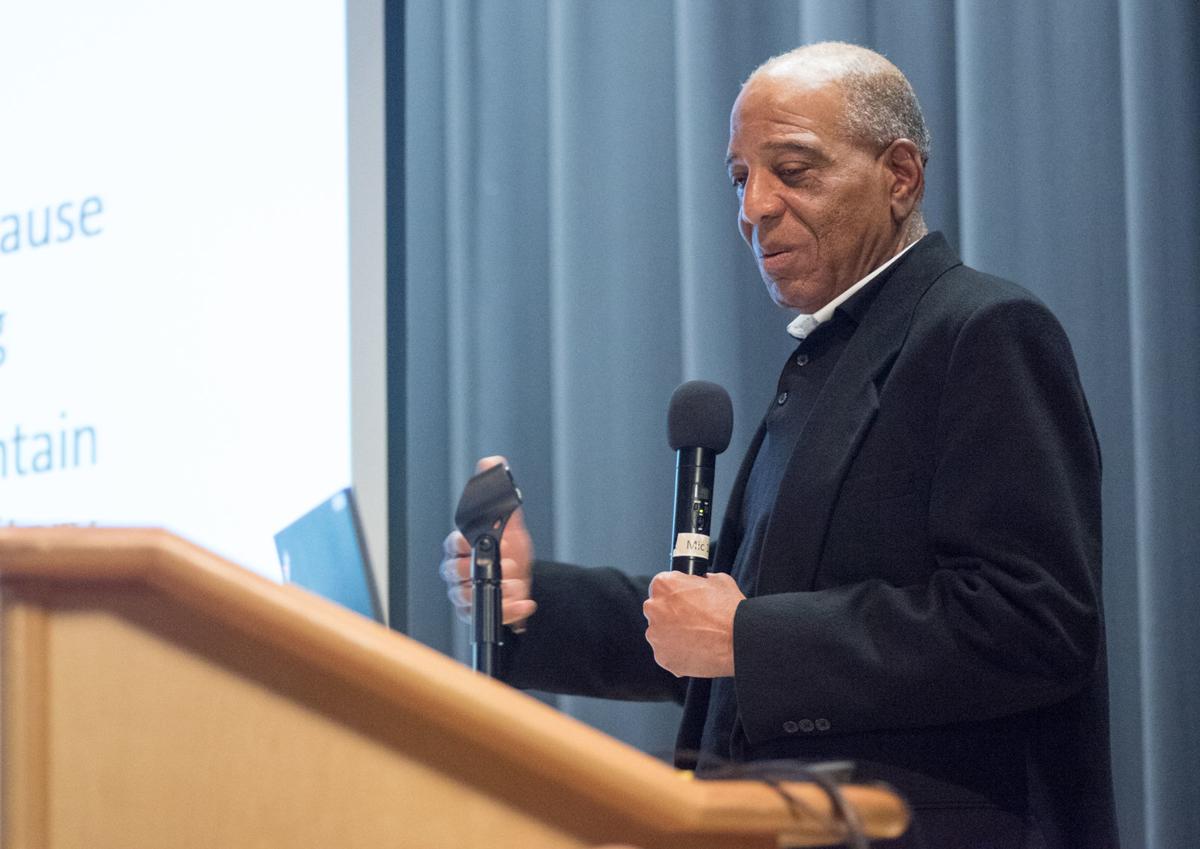 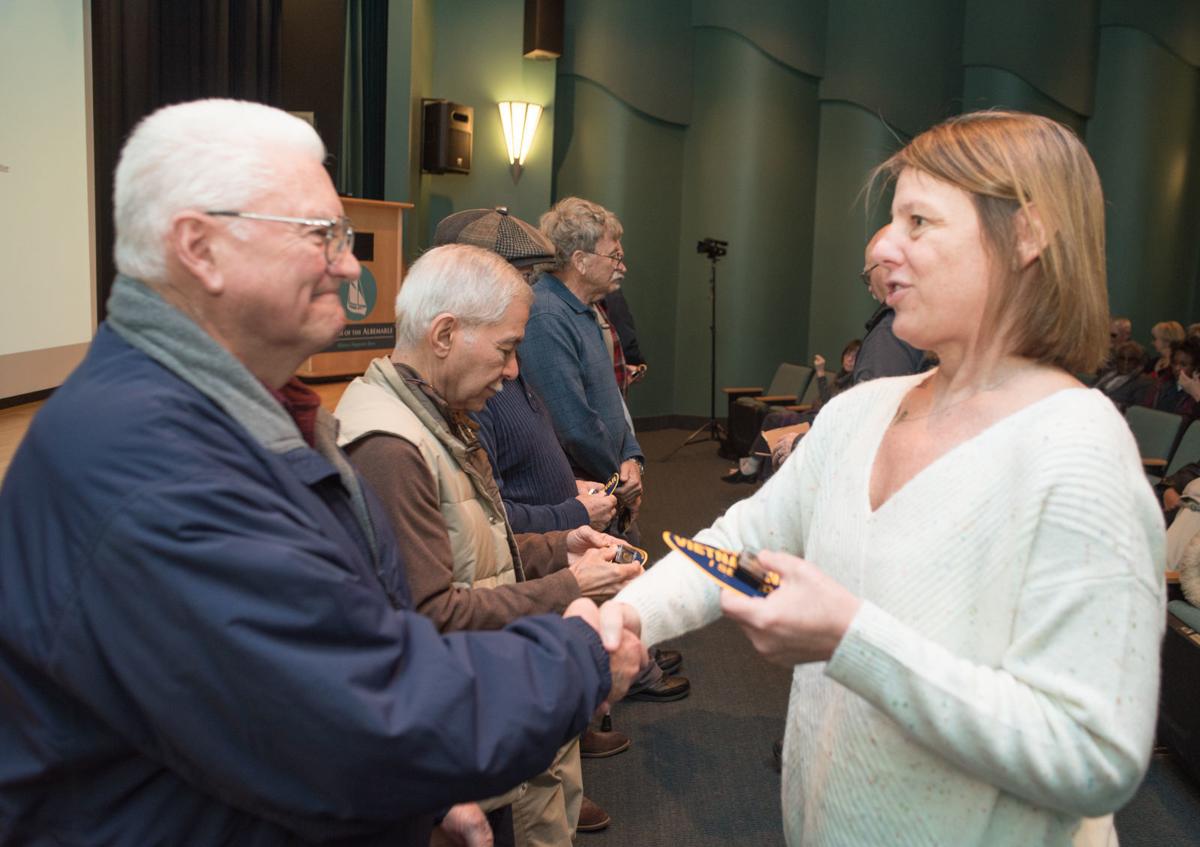 Lori Meads, an educator at Museum of the Albemarle, presents a lapel pin and sticker to Dave Sawyer, a former Marine who served in the Vietnam War, prior to a History for Lunch program on the music of the war era at the museum on Wednesday. Meads presented pins and stickers to more than a dozen Vietnam veterans in attendance at the program.

Lori Meads, an educator at Museum of the Albemarle, presents a lapel pin and sticker to Dave Sawyer, a former Marine who served in the Vietnam War, prior to a History for Lunch program on the music of the war era at the museum on Wednesday. Meads presented pins and stickers to more than a dozen Vietnam veterans in attendance at the program.

American music during the Vietnam War rang in the ears of soldiers and citizens alike, with many of the era’s most popular songs taking a view either for or against U.S. involvement in Southeast Asia.

But many obscure songs also had an impact on the era and it was some of those songs that Elizabeth City State University assistant professor of music Douglas Jackson highlighted in his talk during a Museum of the Albemarle History for Lunch presentation last week.

Jackson, whose talk was titled, “Music of the Vietnam War: Soundtrack for a Generation,” said music has been associated with war and conflict dating back to the days of the Roman Empire. A number of technological advances, however, brought music to the forefront during the Vietnam War.

“Vietnam was the first war to benefit from technology,” Jackson said. “Soldiers had access to transistor radios and tape decks and 8-track tapes. By 1969, more than one-third of the troops listened to the radio more than five hours a day.’’

One of the obscure songs played during Jackson’s presentation — “Viet Nam 66” by Gene Hatton — was met with gasps by many in the audience as it neared its end. The song is structured in the form of two letters, one from a mother to her son camped in a foxhole in Vietnam, and the second from the son to his mother.

“Dear mom, don’t worry about me in this land, I’ll be home soon and say a little prayer for me” are some of the lyrics in the son’s response. The lyrics continue with a good bye as the soldier said, “it is getting dark here,” before a loud gunshot is heard signaling his death. The song ends with the verse “I am a lonesome G.I. in Vietnam.”

“It was released from a small record label in Kentucky and (Hatton) wanted to draw attention to the plight of soldiers in the form of a letter,” Jackson said. “You heard him reciting the letter and then at the end the listener heard a gunshot for effect.’’

Two of the most popular songs during the era — Bob Dylan’s “Blowing in the Wind” and Sam Cooke’s “A Change is Gonna Come” — were not written as protest songs but were embraced by the anti-war movement, Jackson said.

Other popular songs of the era, especially with military personnel, were romantic songs like the hit “My Girl” by The Temptations.

“We know that song, popular songs that dealt with romance of a guy missing his girl,” Jackson said.

Elizabeth City native Lee Smith served three combat tours in Vietnam during his 24-years of service in the U.S. Army. He said the program brought back memories of the music of the era, including several popular tunes not covered during Jackson’s talk.

Smith, who was a door gunner on a helicopter gunship, said “Run Through the Jungle” by Creedence Clearwater Revival and the Merle Haggard classic, “Silver Wings,” are two other songs he remembers from his service in Vietnam.

“CCR’s song was made for the grunts,” Smith said. “Then there was the song ‘Silver Wings,’ and I got sick of hearing it because they played it all day long.”

Before the program that was attended by 140 people, Museum of the Albemarle educator Lori Meads gave a lapel pin and sticker to more than a dozen Vietnam veterans in attendance.

“We are a grateful nation for your service to our country,” Meads told each veteran.