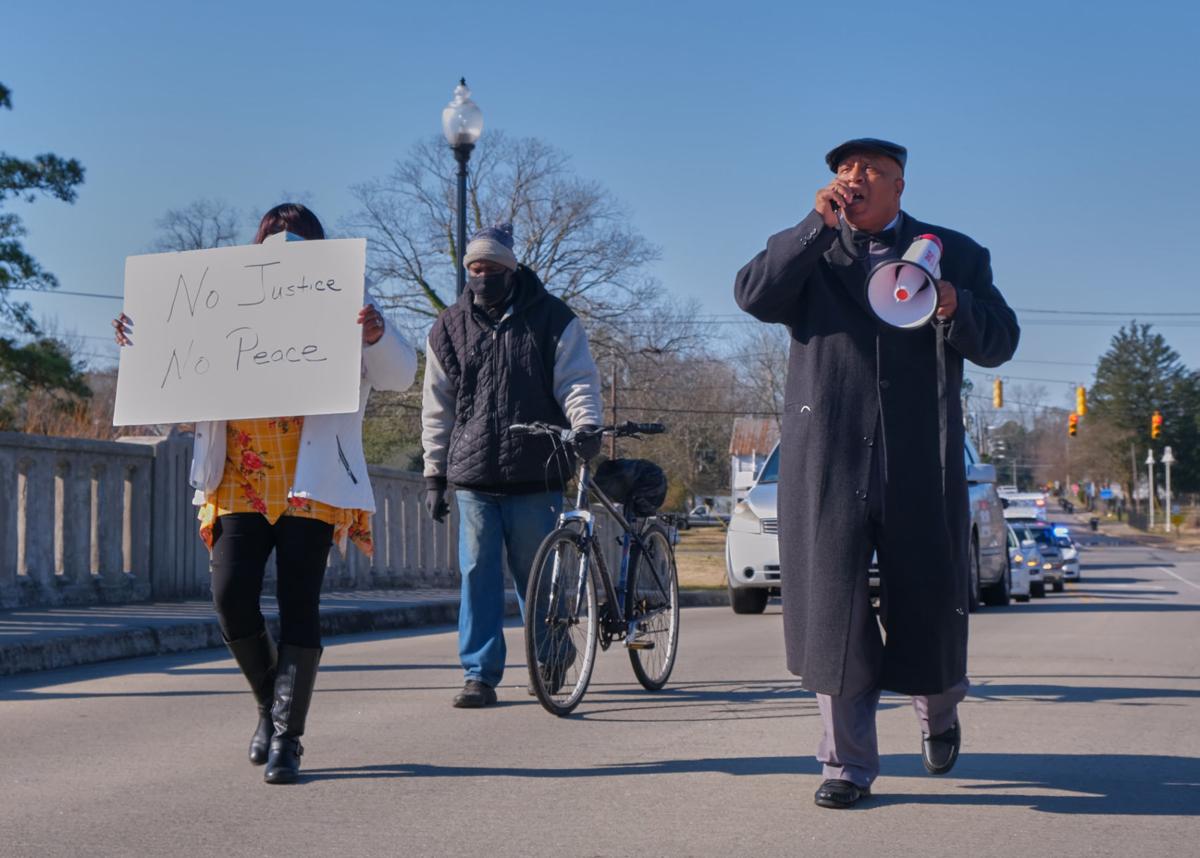 The Rev. Timothy Stallings (right) leads a small group of people, many of them following in their vehicles, on a Martin Luther King Jr. memorial march from Elizabeth City State University to Charles Creek Park, Monday morning. 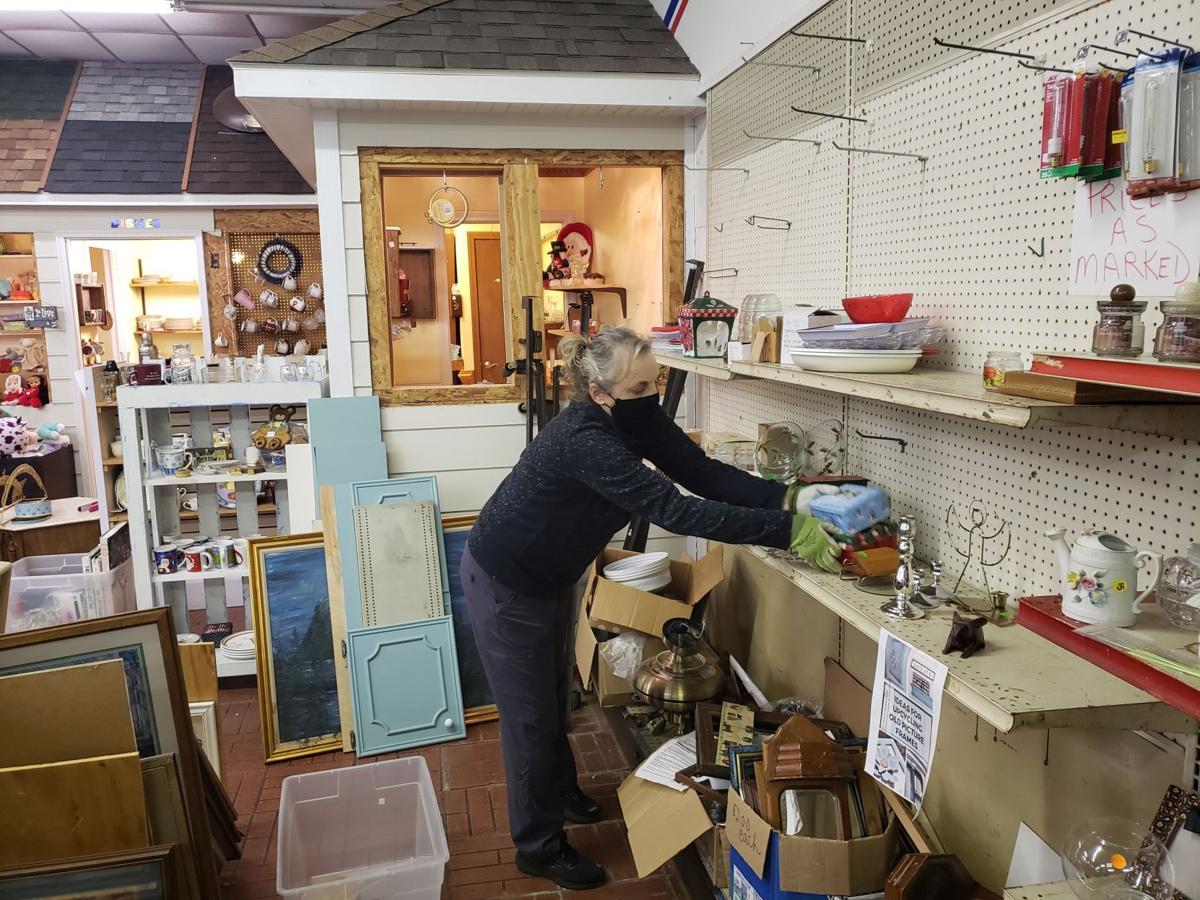 Penni Fritz of Hertford packs up Christmas items while volunteering at a Martin Luther King, Jr. Day of Service event at the Elizabeth City Habitat for Humanity Store, Monday morning.

The Rev. Timothy Stallings (right) leads a small group of people, many of them following in their vehicles, on a Martin Luther King Jr. memorial march from Elizabeth City State University to Charles Creek Park, Monday morning.

Penni Fritz of Hertford packs up Christmas items while volunteering at a Martin Luther King, Jr. Day of Service event at the Elizabeth City Habitat for Humanity Store, Monday morning.

Only three people participated in the annual Martin Luther King Jr. March from the ECSU campus to Charles Creek Park. The trio were joined by a motorcade of five vehicles that drove the route along Southern Avenue. Two police cars and an ambulance rounded out the motorcade.

Elsewhere, Penni Fritz of Herford was the lone volunteer for the Martin Luther King Jr. Day of Service event at the Elizabeth City Habitat for Humanity Sale Store on Monday.

Typically several hundred people, many of them ECSU students, participate in the annual march. And last year, around 30 volunteers, including about 20 ECSU students, showed up to volunteer for the King Day of Service event at the Habitat store.

Organizers cited the COVID-19 pandemic and the fact that ECSU students don’t return to campus until Wednesday for significantly reducing the number of participants at both events. ECSU announced last week that students’ return to campus was being pushed back to Wednesday because of concerns about the virus.

Following the march, organizer the Rev. Timothy Stallings told a small group gathered at Charles Creek Park that all preachers need to lift their voices against racism.

Stallings was referring to Floyd, an African American man who was killed May 25 during his arrest by a white Minneapolis police officer who placed his knee on Floyd’s neck for nearly 9 minutes. Taylor was a Black emergency medical technician shot and killed by Louisville, Kentucky police officers executing a no-knock warrant at her apartment March 13 as part of an investigation into drug dealing. Arbery was a Black man shot and killed Feb. 23 by a white man in Georgia who was one of three men pursuing Arbery as he jogged through a neighborhood.

All preachers need to lift up their voices against hatred and racism, Stallings said.

“Ahmaud Arbery was like me,” he said. “I love to jog. I love to walk through my community.”

Two men saw Arbery jogging and thought he was a burglar, Stallings said.

“We’ve got to stop that type of thinking,” he said. “We should not be afraid of one another.”

Stallings said he has family members who are law enforcement officers and he prays every night for law enforcement. He said he thanks God for good police officers.

Stallings carried a megaphone during Monday’s march and chanted slogans such as “No Justice No Peace” and “Hands Up! Don’t Shoot!” as well as “Love Conquers Institutional Racism.”

This was the third year in a row that Fritz has volunteered at the Habitat for Humanity store on the Martin Luther King Jr. holiday. She spent part of the morning packing up Christmas items that had been for sale. Fritz wore a mask and gloves as she packed up the items.

“I’m just doing what I can to help out,” Fritz said. “We have had bigger crowds here in past years. I am social distancing from the two other people that are here.’’

Habitat year-round volunteer Jim Turdici of Elizabeth City and a store employee were also working Monday. Turdici, who said he was there in part to coordinate volunteers for the Day of Service event, wasn’t surprised by Monday’s turnout.

“It’s one of those things that until they get the shots a lot of people will be reluctant to come out and work in a public place,” Turdici said. “That’s too bad because there are a lot of good organizations that need it.”