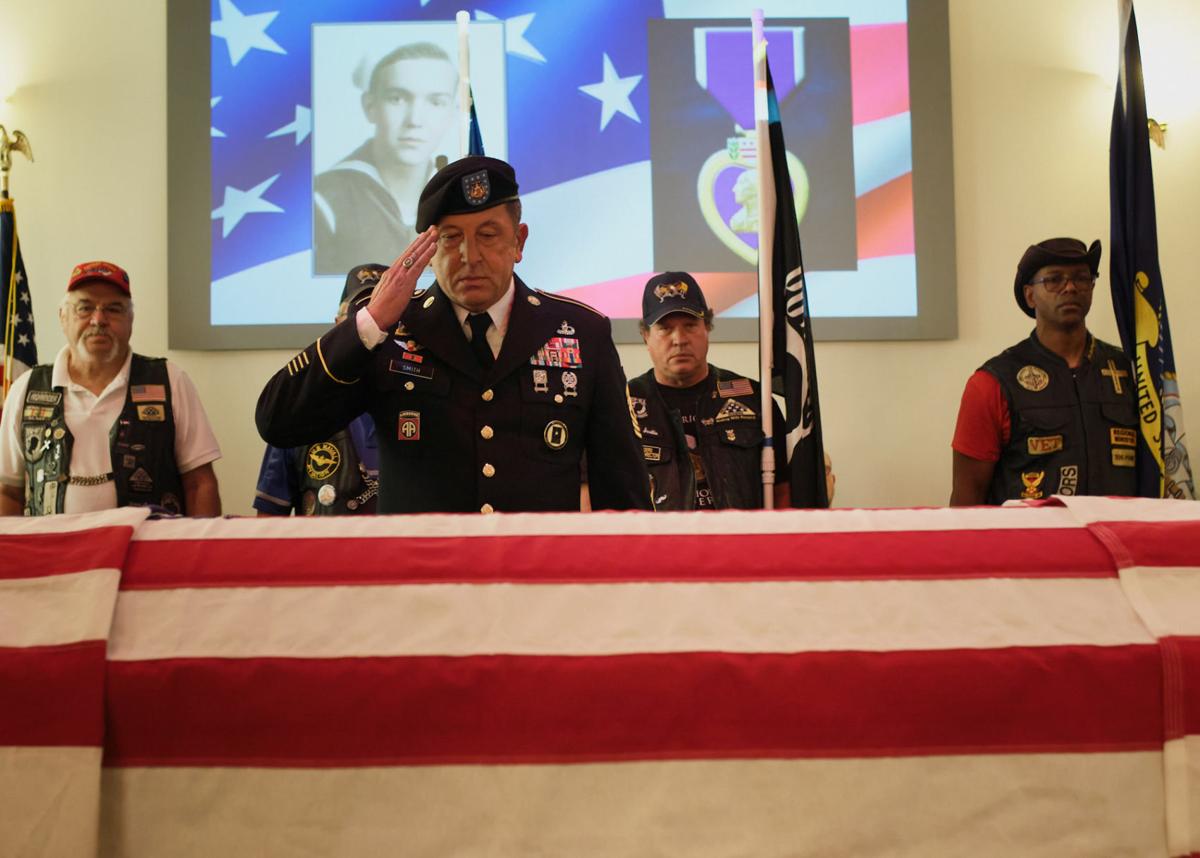 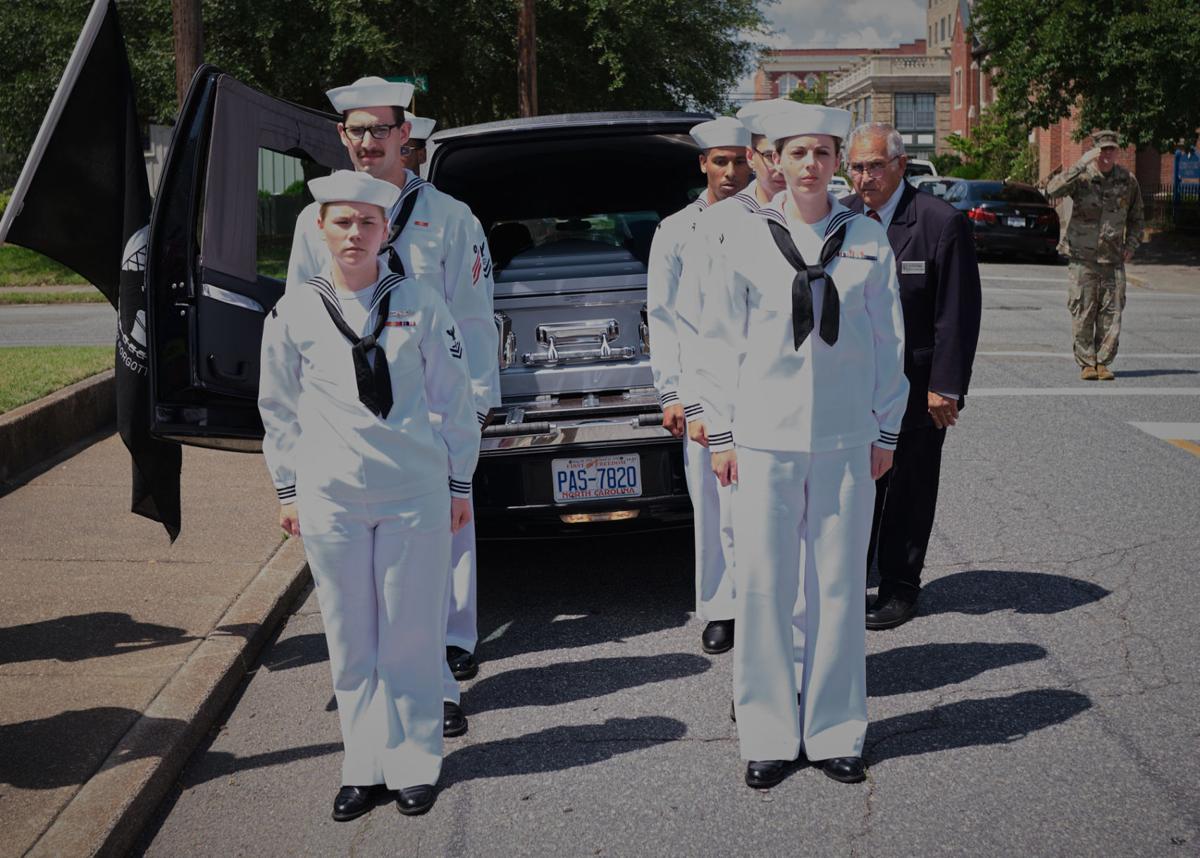 A U.S. Navy pallbearer team is shown after Petty Officer 1st Class William Eugene Blanchard’s casket was placed in a hearse for the trip to New Hollywood Cemetery where he was laid to rest.

A U.S. Navy pallbearer team is shown after Petty Officer 1st Class William Eugene Blanchard’s casket was placed in a hearse for the trip to New Hollywood Cemetery where he was laid to rest.

On Monday, nearly 30 people, including several members of Blanchard’s family, attended a memorial service with military honors at Twiford Funeral Home for the Navy sailor killed at Pearl Harbor on Dec. 7, 1941. Blanchard’s remains were then laid to rest in New Hollywood Cemetery.

The memorial service began at 1:56 p.m., which in Pearl Harbor, Hawaii, would have been 7:56 a.m., the time it was on Dec. 7, 1941, when the first of several Japanese aircraft-delivered torpedoes struck the USS Oklahoma amidship, eventually sinking the Nevada-class battleship.

Blanchard, who was assigned to the Oklahoma as a boilermaker, was among the 2,000 sailors, soldiers and civilians killed in the Japanese sneak attack.

Monday’s memorial was made possible after nearly eight decades when a little-known agency of the U.S. Department of Defense used DNA to identify Blanchard’s remains.

The U.S. Department of Defense POW/MIA Accounting Agency, or DPAA, has been working for several years to identify the remains of 429 sailors who died aboard the Oklahoma.

Blanchard’s son, Bill, who lives in Elizabeth City with his wife Sandra, received a phone call in February informing him that DPAA had positively identified his father’s remains through DNA testing. The agency had used a DNA sample collected from Blanchard Sr.’s first cousin in Georgia to identify the remains.

Bill, who is 80 today but was just six months old when his father died, was joined by Sandra and their three children — Stephanie, Darin and Chris — at Monday’s service.

“Although I’d like to say differently, none of us here today are honored to have personally known Gene the man — my father was just too young to have remembered his Dad,” said Stephanie, referring to her grandfather by his nickname.

Stephanie talked about her grandfather based on stories told by her grandmother and Blanchard’s wife, Laura Ann.

“We know through stories told by our grandmother that Gene was a great dancer — they had won several jitterbug contests in Bremerton, Washington, in 1940,” she said. “He enjoyed boxing, asking in a letter for our grandmother to please send him his boxing shoes so he could hit the bag to get back in shape and help pass the time on the ship.

“He loved his 1937 Ford, even enclosing in a letter a list of things that our grandmother should have done to the car before he returned home, including getting four new tires and a new battery from Sears,” Stephanie said.

Gene had a great sense of humor, was romantic and felt a considerable deal of responsibility to his subordinates aboard the Oklahoma, she said.

“But most of all he loved two things above all else in the world: his wife and his baby boy, Billy Gene, my father, Bill,” Stephanie said.

Born in Tignall, Georgia, William Eugene Blanchard was a blacksmith by trade before he enlisted in the Navy in 1936. He met his wife, Laura Ann, in Bremerton, Washington, and they were married in 1939. Laura Ann gave birth to Bill in June 1941.

When he arrived in Pearl Harbor, William was a petty officer assigned to the USS Oklahoma. He worked as a “boilermaker” — one of the sailors whose job was to tend to the ship’s boiler system.

The Oklahoma, a Nevada-class battleship, was moored at Ford Island, Pearl Harbor, Hawaii, the morning of the Japanese attack on U.S. naval forces.

In preparing for William’s memorial, Bill and Sandra purchased three plots at New Hollywood Cemetery. One is where they will bury William in a steel, watertight casket provided by the Navy. The other two plots are reserved for them.