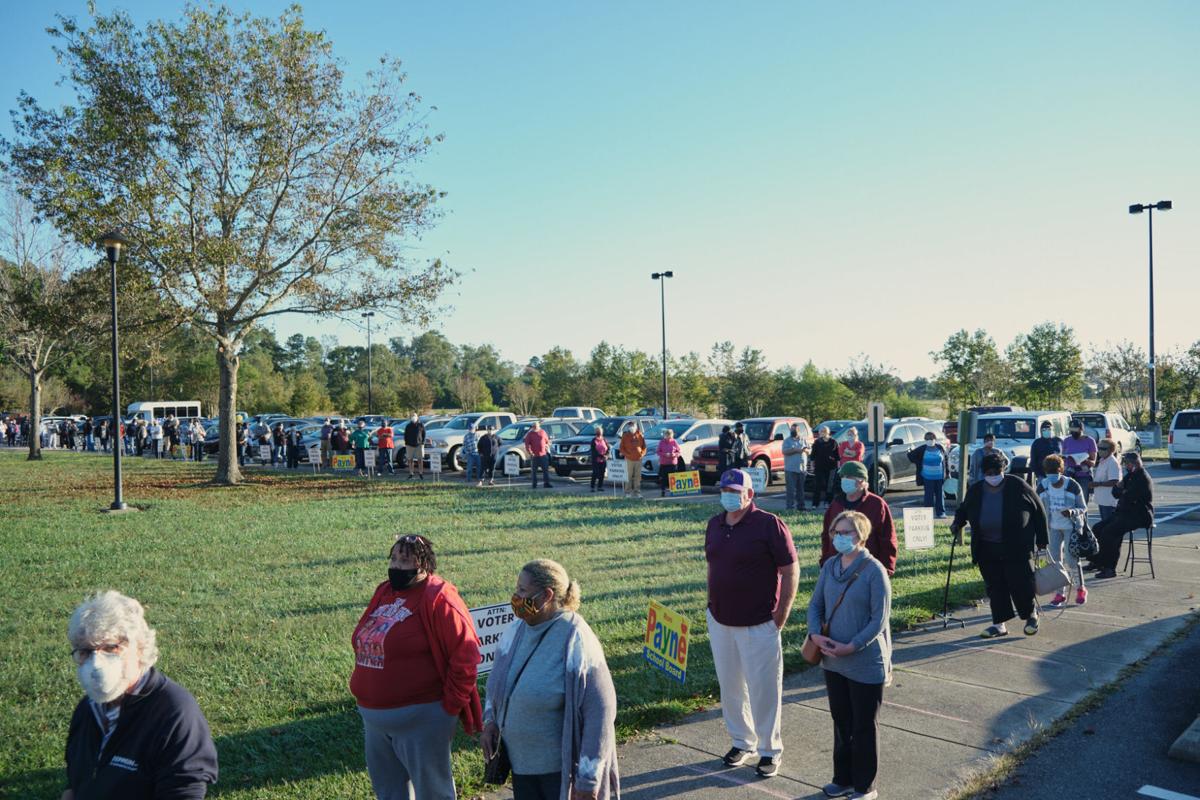 At 8 a.m. on Thursday, the line of residents voting early on the first day of the early voting period stretched from the entrance of the K.E. White Graduate Center all the way to the rear of the building. 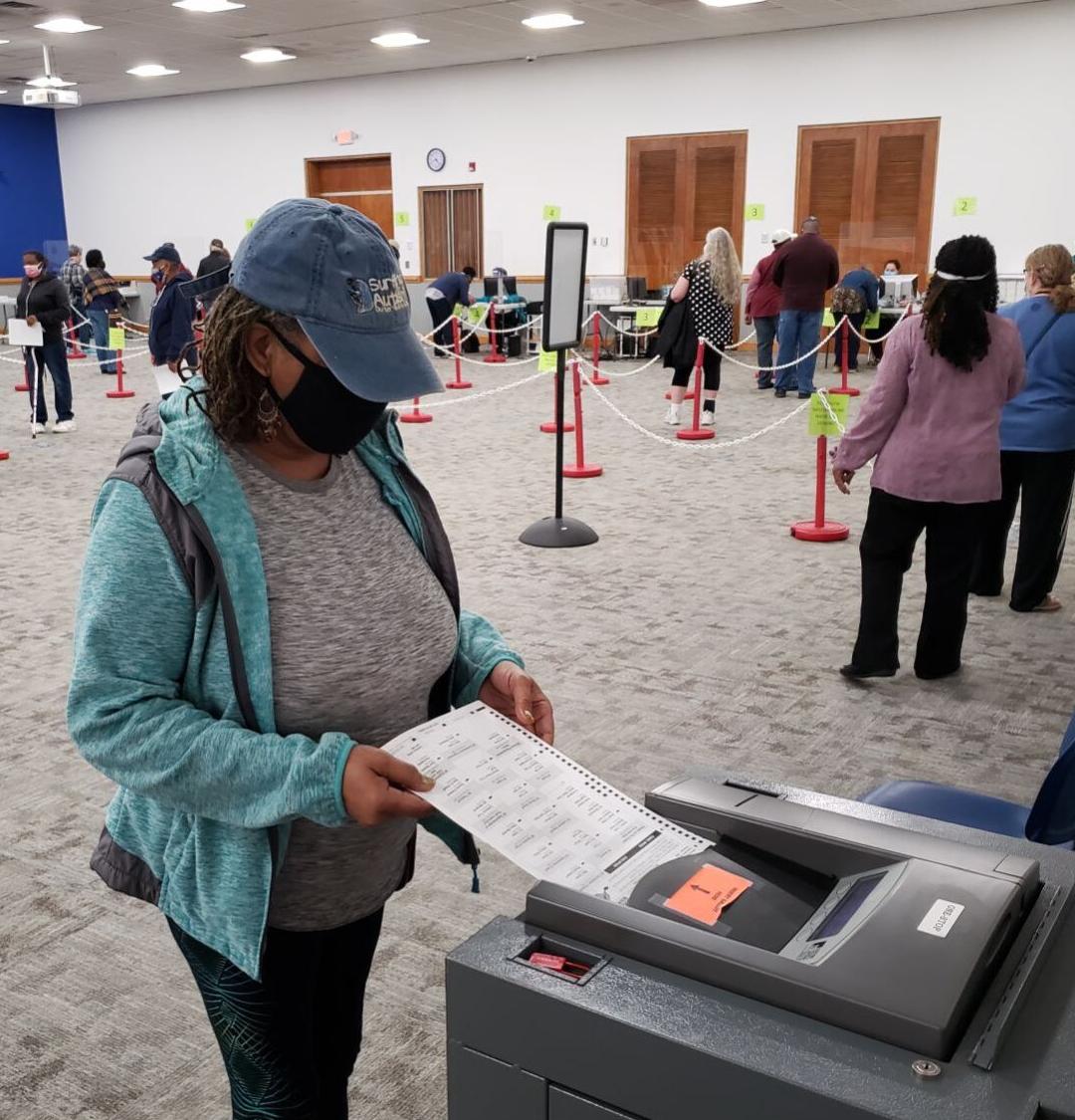 Wanda Clarity was the first voter to cast a ballot as one-stop voting for the Nov. 3 election got underway in Pasquotank County Thursday at the K.E. White Center at Elizabeth City State University. Clarity arrived at the White Center at 5 a.m., three hours before the polling site opened.

At 8 a.m. on Thursday, the line of residents voting early on the first day of the early voting period stretched from the entrance of the K.E. White Graduate Center all the way to the rear of the building.

Wanda Clarity was the first voter to cast a ballot as one-stop voting for the Nov. 3 election got underway in Pasquotank County Thursday at the K.E. White Center at Elizabeth City State University. Clarity arrived at the White Center at 5 a.m., three hours before the polling site opened.

After seeing television reports of voters in other states waiting up to eight hours to cast a ballot during early voting, Wanda Clarity decided she didn’t want to wait that long in line to cast her ballot.

So, Clarity decided to cut that wait down to three hours as the Elizabeth City resident arrived at Pasquotank’s one-stop voting site at 5 a.m. Thursday morning — three hours before the polls opened for early voting for the Nov. 3 general election.

“I didn’t want to stand in a long line so I got up at 3 a.m.,” Clarity said. “I wanted to get my vote in early because it was very important for me to vote today. I was surprised I was the first one in line.”

Clarity soon had company as the next several voters arrived at the K.E. White Center at Elizabeth City State University just after 5 a.m.

By 7:15 a.m. Thursday, well over 100 voters stood in line as the sun rose on a crisp fall morning. By the time the polls opened 45 minutes later, over 200 voters were ready to cast their ballots as the line snaked from the front of the White Center to the rear parking lot.

Almost every voter wore a mask or face covering and people appeared to be practicing social distancing.

“Not surprised at all,” said Pasquotank Board of Elections Director Emma Tate of the mass of voters in line before the doors opened.

As of 7 p.m., Tate said 1,690 Pasquotank voters had cast a ballot. She said that possibly could be a county record for the first day of one-stop voting.

“I know we did reach a county record for curbside voting,” she said, remarking that cars bringing voters to the White Center seemed to be lined up pretty much all day.

The day’s only incident involved a curbside voter. Betty Morris said she and her husband and son arrived to vote curbside and the elections official who brought them their ballots mistakenly brought two that had already been voted but apparently not tabulated.

When Morris pointed out the error, election officials apologized, took the ballots back in and tabulated them and brought her two new ballots, she said.

Morris said she and her family were able to vote, but she wanted to make sure their ballots were tabulated. She said the incident happened about 1:30 p.m. and took some time to straighten out.

Tate acknowledged the error when asked about it Thursday evening. She said it happened because a poll worker was busy with so many curbside voters that the worker picked up ballots for the Morrises from the wrong place.

The error was corrected, Tate said. After it happened, Tate said she pulled poll workers aside and told them, “I know the line is long, but try to help only one person at a time.”

Tate said the Morrises’ ballots were tabulated as were the two ballots the poll worker mistakenly brought to their car.

She said that was the day’s only incident.

“Everything went pretty smoothly,” Tate said. “The flow of voters through the space was pretty nice. Several voters commented about that.”

Clarity said her voting experience went smoothly. She was in and out in about 15 minutes despite having to fill out an extensive ballot that includes over 30 races.

“We need a change in this country, a really big change,” Clarity said.

Another voter, a life-long county resident, arrived to vote at the White Center around 6:45 a.m. The voter was critical of President Trump’s handling of the COVID-19 pandemic while praising North Carolina Gov. Roy Cooper’s response to the virus.

“This is an important election and we need a new president,” the resident said. “Trump doesn’t believe this (COVID) is real, serious. I know. I’m just thankful that our governor (Cooper) listened to the experts.”

But the Newland resident was not voting a straight Democratic ticket, instead saying they cast a vote for incumbent Republican Thom Tillis in his U.S. Senate race against Democratic challenger Cal Cunningham.

Cunningham recently admitted to engaging in an extramarital affair this past summer. The U.S. Senate race is one of the most-watched races in the country and the outcome could determine which party controls the chamber.

“I’m not voting for Cunningham,” the voter said. “How could a man do that to his family, in the middle of a campaign no less.”

Around 60 voters were lined up to vote when the polls in Currituck opened at 8 a.m. By 10 a.m., 203 voters had cast ballots at the Judicial Center in mid-Currituck. A report from the county around 3 p.m. indicated 670 voters had cast a ballot. Voting was scheduled to continue until 7:30 p.m.

Elections Director Elaine Best said a long line had formed outside the office when she arrived at 7 a.m.

“It’s been all day long,” she said of the stream of voters.

Results from Chowan and Perquimans were not available Thursday evening.