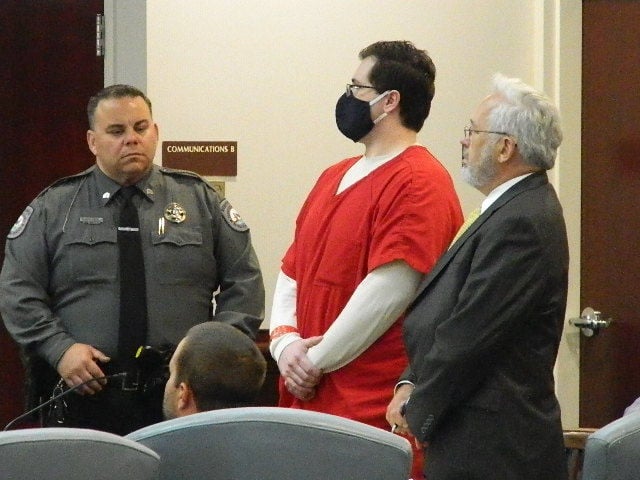 Lucas Molesky (center with face covering) stands with his attorney Jay Hollingsworth, during a hearing in Currituck Superior Court Monday where Molesky pleaded guilty to first-degree murder in the slaying death of Adam Markert on Dec. 4, 2018. 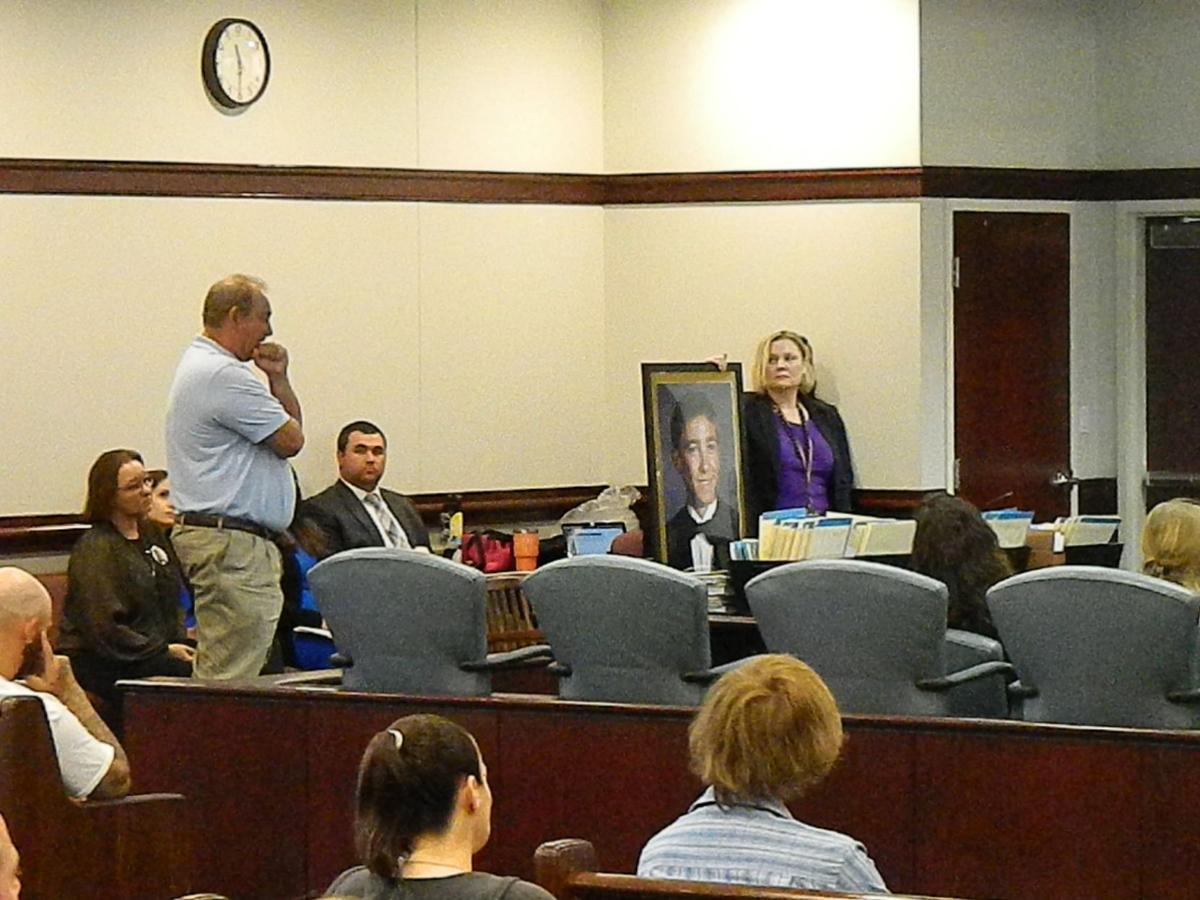 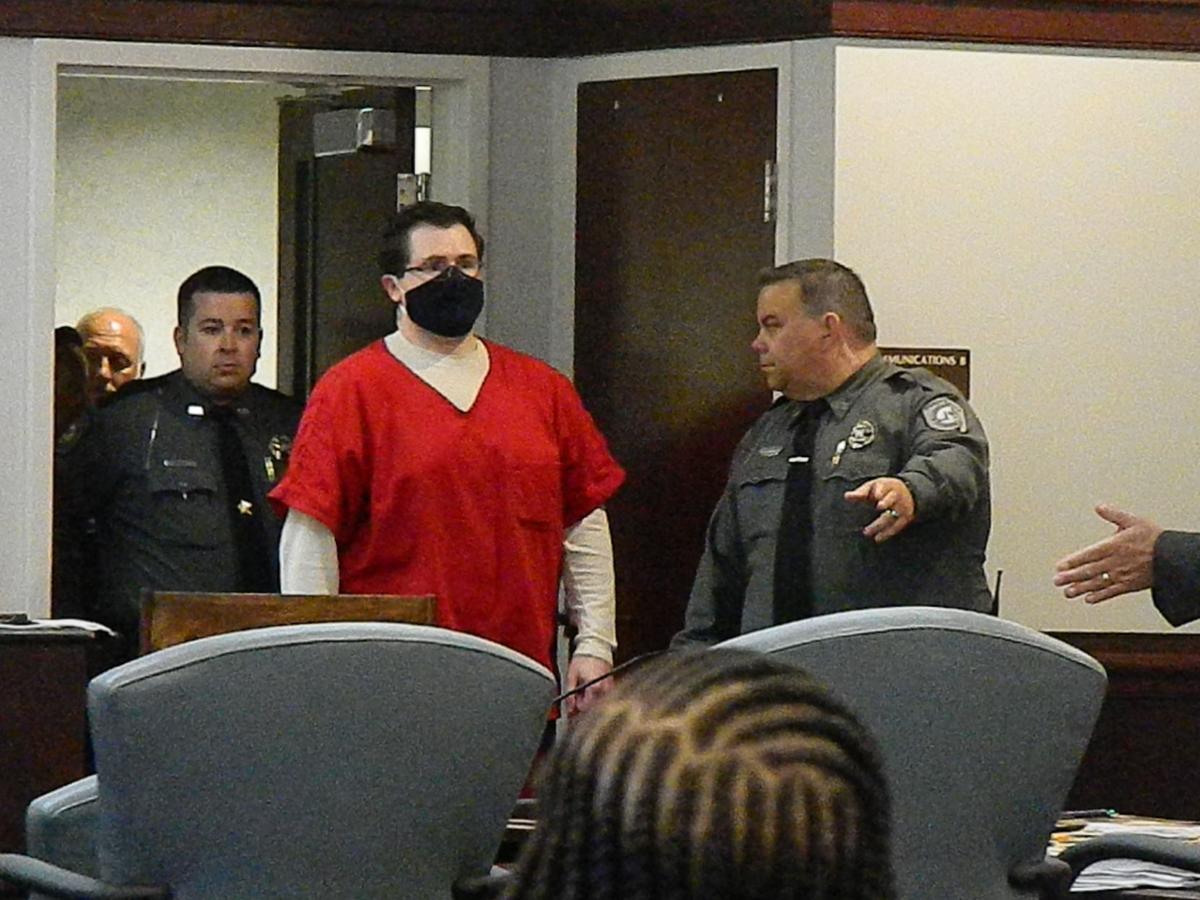 Lucas Molesky enters the courtroom in Currituck Superior Court, Monday, prior to pleading guilty to first-degree murder in the brutal slaying of Adam Markert in Coinjock on Dec. 4, 2018. Judge Jerry Tillett sentenced Molesky to life in prison without the possibility of parole. 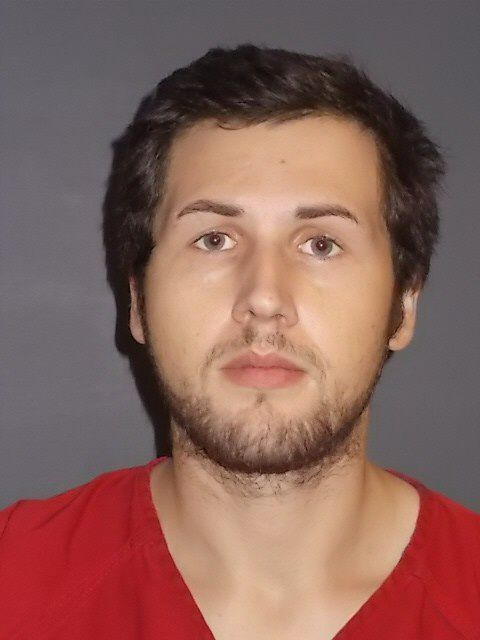 Lucas Molesky (center with face covering) stands with his attorney Jay Hollingsworth, during a hearing in Currituck Superior Court Monday where Molesky pleaded guilty to first-degree murder in the slaying death of Adam Markert on Dec. 4, 2018.

Lucas Molesky enters the courtroom in Currituck Superior Court, Monday, prior to pleading guilty to first-degree murder in the brutal slaying of Adam Markert in Coinjock on Dec. 4, 2018. Judge Jerry Tillett sentenced Molesky to life in prison without the possibility of parole.

CURRITUCK — A Currituck County man will spend the rest of his life in prison after pleading guilty Monday to first-degree murder in the death of another Currituck man.

Superior Court Judge Jerry Tillett sentenced Molesky to life in prison without the possibility of parole in a plea deal that allowed the defendant to avoid a death penalty trial.

Assistant District Attorney Kim Pellini told the court that Markert, 35, was stabbed a total of 83 times, including 35 wounds to his head and neck. Markert was also shot several times after he was dead, Pellini said.

Molesky wore a face covering during the proceedings and answered “Yes, sir,” when asked by Tillett if he understood the plea agreement.

Markert’s mother, Bonny Blanchard, said Molesky “needs to die” for killing her son but is satisfied with the plea deal.

“I feel like it was fair,” Blanchard said of the agreement. “(Molesky) will never have a chance of an appeal or probation, ever. I am satisfied that he will stay there and die in prison.”

Blanchard told the court that she is “still reeling through this loss” and called her son a good citizen and a Christian.

“You would have liked him,” Blanchard told Tillett.

Outside the courtroom, Blanchard said her son’s murder “is the hardest thing I have ever been through.”

“I miss my son. I love him and I want to honor him,” Blanchard said.

Markert was in a relationship with Lucas Molesky’s mother, Pam Molesky, at the time of his murder and he shared a home with them in Coinjock.

Pellini said when sheriff’s deputies arrived at the home at 7:50 p.m. on the day of Markert’s murder they found a large amount of blood and “signs of a struggle.” There were also four guns missing from the home, Pellini said.

Pam Molesky was out of town at the time of the murder. Blanchard speculates that her son may have encountered Lucas Molesky in the act of taking the guns that were reported missing.

Blanchard also said her son told her that a gun belonging to Pam Molesky went missing from the home before Thanksgiving but does not know if it was reported to authorities. She also said her son kept very few personal items at the home because he was afraid that Lucas Molesky would steal them.

“(Lucas Molesky) took that opportunity to steal more stuff,” Blanchard speculated. “We are not sure what happened. But it sounds like my son caught him stealing the weapons out of (Pam Molesky’s) safe. The thing that bothers me, there was a weapon missing before this happened.’’

Blanchard said her son told her shortly before he was murdered that he needed to leave the relationship with Pam Molesky but that “it was hard for him” to do so.

“(Adam) had feelings for her but she manipulated him into believing things,” Blanchard said.

Blanchard said she heard some of the details surrounding her son’s death for the first time last week, including that he was shot after he was already dead.

“They felt like if it was going to go to trial, they couldn’t release any of the information until now,” Blanchard said. “Like the shotgun, that was the first time I had heard about that.”

Adam Markert was the nephew of Currituck Board of Commissioners Chairman Mike Payment. He told the court that Markert and his late mother, Madeline Payment, were close.

Madeline Payment passed away several months after her grandson was murdered.

“It has been a difficult time for the family, and I know my mom would be satisfied, too,” Payment said outside the courtroom. “She died four months after that, and I know part of it I’m sure was due to her devastation she had to go through.”

Molesky was arrested the day after the murder in Chesapeake, Virginia, and had been in the Currituck Detention Center awaiting trial since.