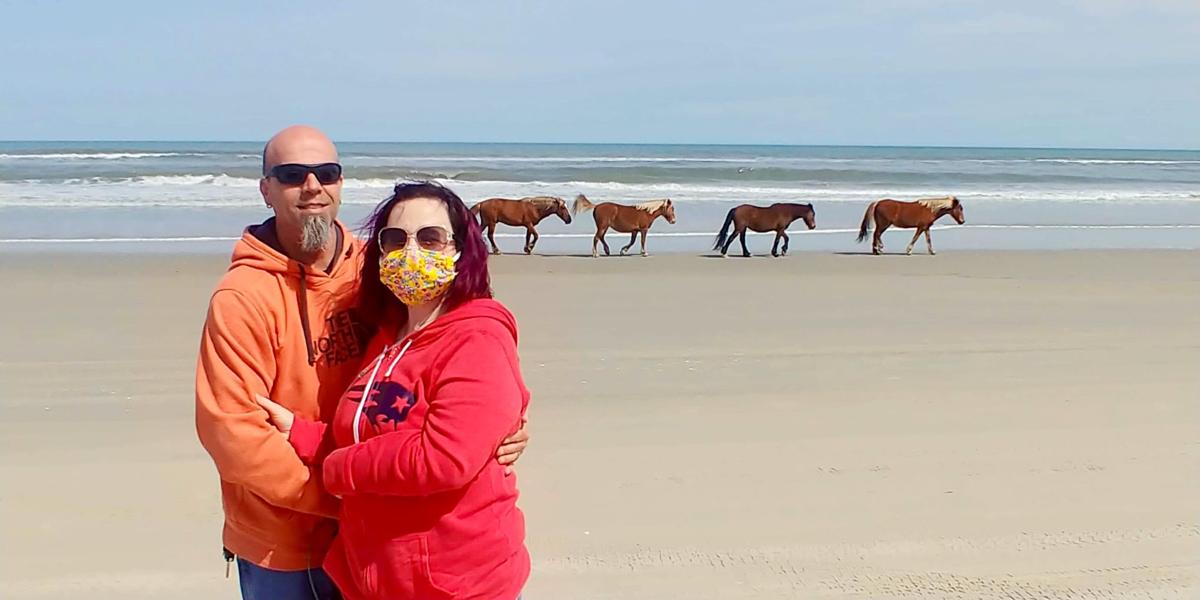 Jim and Melissa Renzi of Richmond, Virginia, are shown in front of a number of horses belonging to the Corolla wild herd during the Renzis' visit to Carova on the Currituck Outer Banks, Saturday, March 30. The Corolla Wild Horse Fund, which manages the wild horses, decided to name a newborn foal "Renzi," in honor of Melissa, who suffers from several terminal diseases. 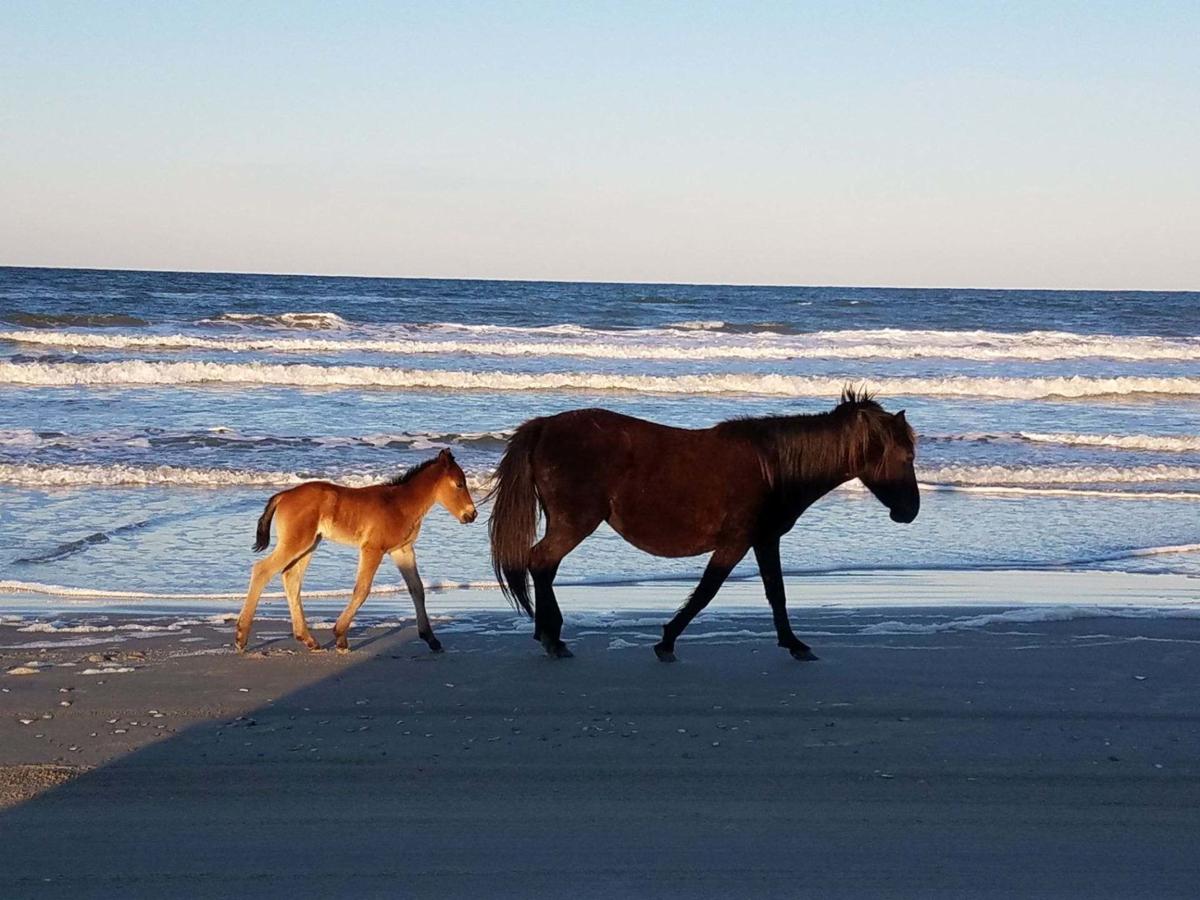 "Renzi," a newborn foal named for Melissa Renzi of Richmond, Virginia, is shown with the mare who gave birth to him on Monday, April 1.

Jim and Melissa Renzi of Richmond, Virginia, are shown in front of a number of horses belonging to the Corolla wild herd during the Renzis' visit to Carova on the Currituck Outer Banks, Saturday, March 30. The Corolla Wild Horse Fund, which manages the wild horses, decided to name a newborn foal "Renzi," in honor of Melissa, who suffers from several terminal diseases.

"Renzi," a newborn foal named for Melissa Renzi of Richmond, Virginia, is shown with the mare who gave birth to him on Monday, April 1.

COROLLA — When Melissa Renzi and her husband recently got to see a group of wild horses roaming the Currituck Outer Banks, they thought they were just checking off another life marker on Melissa’s bucket list.

Renzi, of Richmond, Virginia, suffers from a number of terminal illnesses and has been in hospice care since 2017. So she and her husband, Jim, have been busy trying to get as many things accomplished as they can. For example, she completed a 1950s-style pinup photo shoot — something she’d always wanted to do.

Renzi has always loved horses and the beach; she describes horses “as my peace.” But she only decided to add seeing Corolla’s famous wild herd to her bucket list after being told about them by a friend who had visited the Outer Banks.

The Renzis have wanted to visit the Outer Banks to see the wild horses ever since. Finances and the distance involved, however, seemed to stand in the way.

At least they did until Jeff Kelly, who operates a wild horse tour business in Corolla, and Meg Puckett, herd manager for the Corolla Wild Horse Fund, decided to help out. They helped arrange a visit for the Renzis to Currituck the weekend of March 28-30 to help Melissa mark her 48th birthday on March 31. The trip included not only a visit to the Wild Horse Fund’s rescue facility on the mainland but also a visit to the northern Outer Banks to see the famous wild horses.

Renzi was still gushing about the trip a week later. Not only did she get to touch horses at the rescue facility, she got to witness a stallion fight on the beach between several members of the wild herd.

“It was so beautiful. I wanted to become homeless and stay there the rest of my life,” she said, recalling the experience.

The best part of her bucket-list trip, however, happened as she and Jim were preparing to return home to Richmond.

A foal was born early the morning of March 31 — the wild herd’s first of 2019 — and to honor Renzi and her courage, Wild Horse Fund officials decided to pay her the rare honor of naming the horse after her.

“It seemed only fitting to name the foal after Melissa, who is endlessly upbeat, strong and kind,” states a press release from the Corolla Wild Horse Fund, adding that she shares those traits with Corolla’s wild horses.

Jo Langone, the fund’s chief operating officer, said officials believe “Renzi” is a male but as of last week hadn’t positively determined the foal’s sex. She said it was Puckett’s idea to name the foal for Renzi after first checking with her to see if it would be OK.

Renzi said she was floored when she heard Puckett’s idea.

“Oh my God, that would be amazing!” she recalls saying.

“It’s such an honor,” she continued. “Behind marrying my husband and having my son, it’s the third-best thing that’s ever happened to me.”

Renzi says there aren’t a lot of other good things that have happened in her life recently. She suffers from a number of illnesses, including gastroparesis and mitochondrial disease.

According to the Mayo Clinic’s website, gastroparesis is a disease that slows down the normal muscular contractions that move food through the digestive tract, preventing the stomach from emptying properly. There is no known cure, but medication and changes to diet can relieve its symptoms, which include nausea and vomiting.

Mitochondrial disease is caused by failure of the specialized structures in all cells that are responsible for creating 90 percent of the body’s energy. If enough of the body’s mitochondria fail, the result can be organ system failure and even death.

Renzi, who was diagnosed with mitochondrial disease in 2012 and gastroparesis in 2016, has a ready quip about her diseases: “I like to tell people I have all the stuff they have never heard of.”

And despite having to use oxygen and constantly worrying about infections — during her visit to Currituck, she wore a mask covering her mouth while out on the beach — she tries to take a positive approach to life.

Renzi, who’s only seen photos of the foal that’s now her namesake, will finally get to see him in person when she and Jim return to the Outer Banks on Friday. They’re taking the trip specifically to see “Baby Stick Legs,” or “L’l Renzi,” as she’s taken to calling him.

“It’s just an honor to know that Baby Stick Legs is named for me,” she said. “To know that all his offspring ... going on forever as long as his bloodlines” last will have this connection ... “I think is amazing.”

She also hopes having a horse named for her might somehow help raise awareness about the diseases she suffers from. Gastroparesis, for example, afflicts one in five people but mostly goes undiagnosed, she said.

According to Langone, the foal named for Renzi isn’t the first given a name. Other foals have been named, although fund officials usually try to avoid naming them for people, choosing instead names of events or to honor victims of tragedies. Following the mass shooting at the Pulse Nightclub in Orlando, Florida, in June 2016, for example, a newborn foal was named Orlanda, she said.

The fund, which manages the wild herd’s population, doesn’t name full-grown horses, electing instead to use a system of letters and numbers to identify them, Langone said. The fund’s herd manager keeps records on each horse, monitoring them through either physical sight or photographs.

The fund did name a horse “Gus” in 2014 after Dr. E. Gus Cothran, an equine geneticist at Texas A&M, Langone said. Cothran helped analyze the DNA tests performed on the Corolla wild herd that helped prove they’re of Spanish origin and eligible for registration as Colonial Spanish Mustangs.

Corolla’s wild herd currently numbers around 100, and, according to the Wild Horse Fund, is one of only two groups of the breed remaining in the wild. The horses, originally brought to North Carolina’s barrier islands by Spanish explorers in the 16th century, now roam about 7,500 acres north of the paved section of N.C. Highway 12 on the Currituck Outer Banks.

The fund usually sees around six foal births a year, but is hoping for more this year after the deaths and removals of more than 10 horses in 2018. Langone said the fund keeps track of the herd’s population size through an aerial count by helicopter every other month.