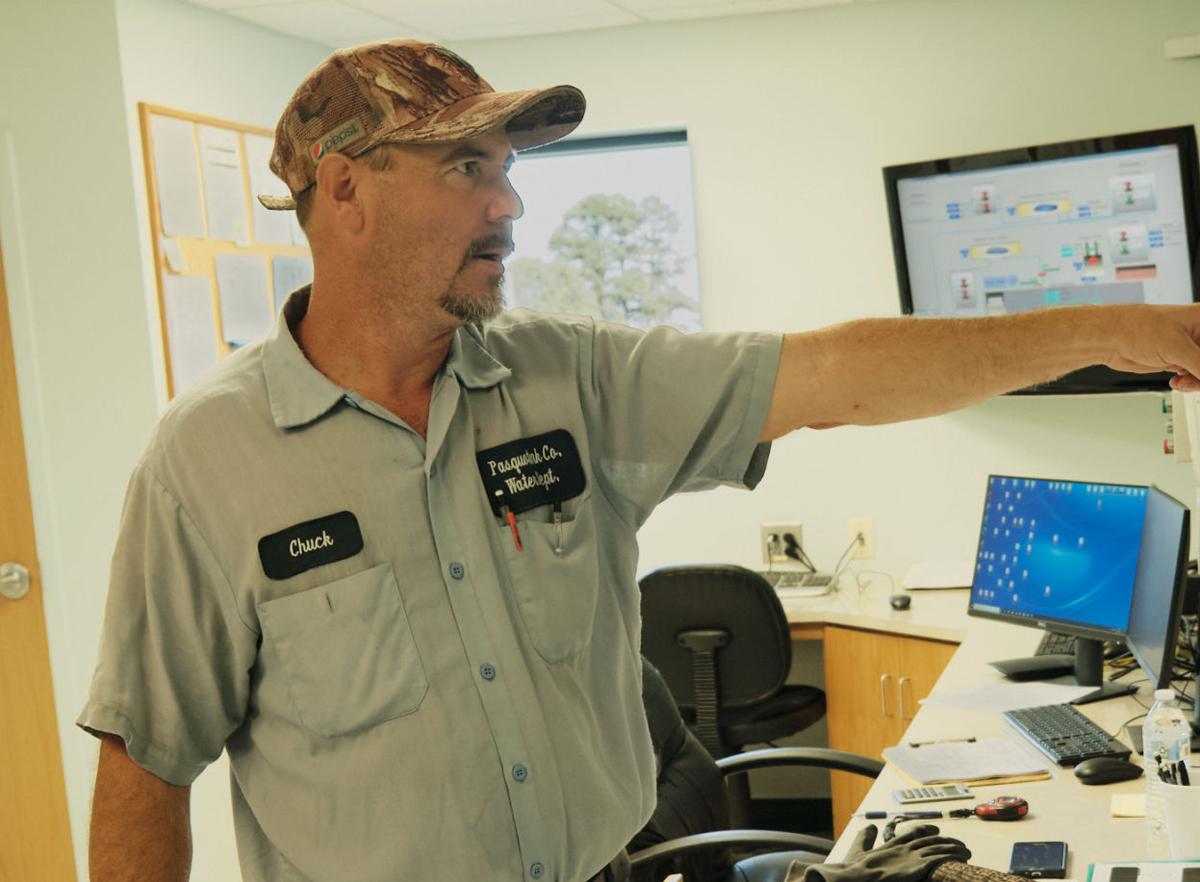 Chuck Lewis, senior plant operator at Pasquotank County’s reverse-osmosis water treatment plant on Foreman Bundy Road, points through the control room to the plant floor while discussing plant operations, Tuesday. A new water master plan for Pasquotank recommends $4 million in upgrades to the plant, which opened in 2012. The plan is proposing water system upgrades that if all were completed, would cost $49 million. 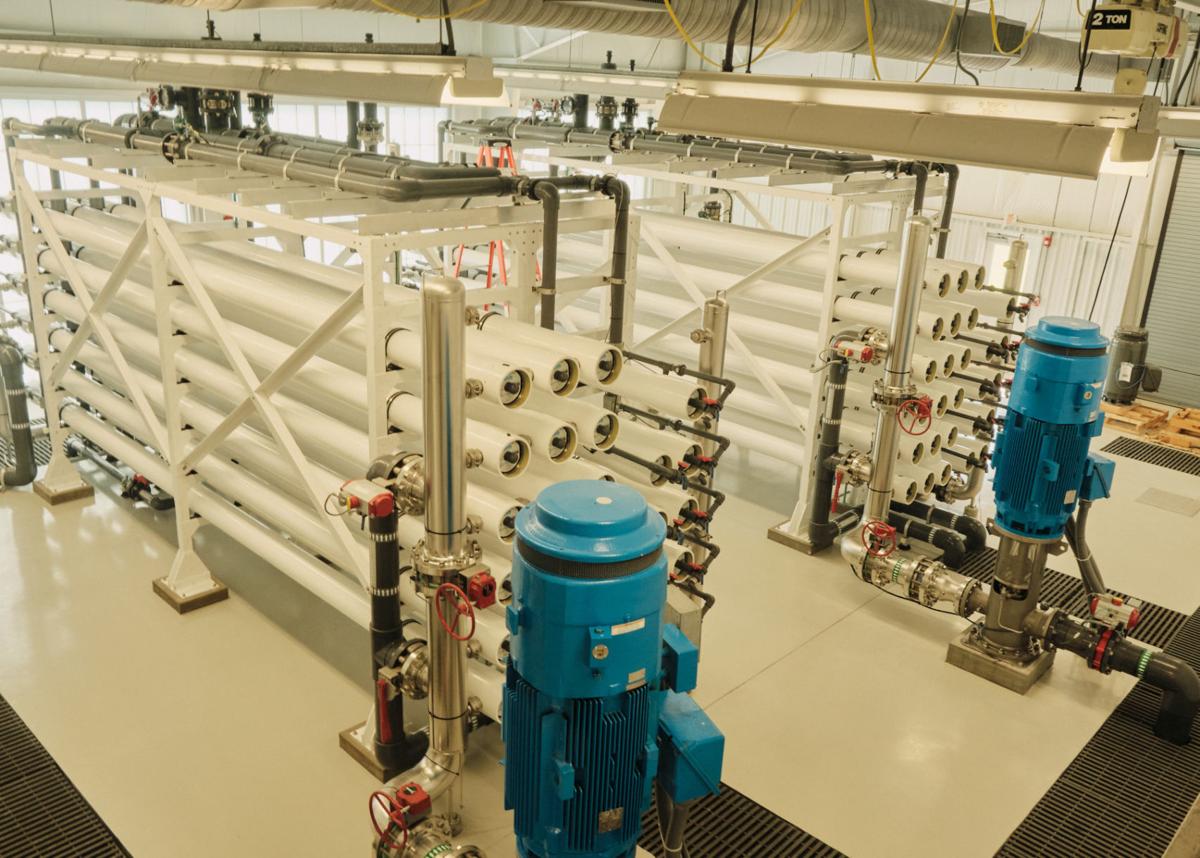 A section of the plant floor at Pasquotank County's reverse-osmosis water treatment plant is shown Tuesday.

Chuck Lewis, senior plant operator at Pasquotank County’s reverse-osmosis water treatment plant on Foreman Bundy Road, points through the control room to the plant floor while discussing plant operations, Tuesday. A new water master plan for Pasquotank recommends $4 million in upgrades to the plant, which opened in 2012. The plan is proposing water system upgrades that if all were completed, would cost $49 million.

A section of the plant floor at Pasquotank County's reverse-osmosis water treatment plant is shown Tuesday.

The South Mills Water Association has agreed to sell the Pasquotank portion of its water distribution system to the county.

Pasquotank will pay $1,394,149 for the portion of the SMWA system in the county, adding just over 1,000 new customers to its water system. The Pasquotank Board of Commissioners is expected to approve the transaction at its Oct. 5 meeting.

Pasquotank officials also have received a blueprint for improving water and sewer service in the county over the next 20 years — a blueprint with a hefty price tag.

Wilson-based water and sewer consultant Green Engineering presented the county’s Water Committee with a master plan Monday that includes around $49 million in recommended improvements over the next 10 years.

The Board of Commissioners voted last November to spend almost $120,000 to have Green Engineering formulate a comprehensive 20-year water and sewer masterplan for the county.

The biggest ticket item on Green Engineering’s list is a proposed new $19 million wastewater treatment facility. According to the company’s plan, future growth in the county will be dependent on adequate and centralized wastewater disposal for county utility customers.

The study also recommends building a 500,000-gallon elevated water storage tank at the proposed Mega Industrial Park at a projected cost of almost $3.8 million. The industrial park would be on the Tanglewood property across from the Walmart store.

Other recommended projects in the master plan include well upgrades, including installing new wells.

County Manager Sparty Hammett said the list of capital improvement projects is just a recommendation and it doesn’t mean the county will act on all the projects.

“Green Engineering did a very comprehensive job; there is a very detailed list,’’ Hammett said. “The overall priority is getting good water to the northern part of the county. We know the next steps to do that. As far as the big price tag, we may or may not do some of that.’’

Once the deal with the SMWA is completed, 1,049 new customers will be added to the county water system, meaning all Pasquotank residents will now be connected to that system. The county is estimating investing between $850,000 and $1 million to bring the Pasquotank portion of SMWA’s water system up to par with the county’s system.

That investment will be around $850,000 if a booster pump station does not need to be added. All 1,049 new customers will need new water meters and some undersized piping on Mill Pond Road may have to be replaced, officials said. The county plans to use existing funds, not debt service, to buy the Pasquotank portion of the SMWA water system.

County Water Department Superintendent David Smithson told the Water Committee that he recommends upgrades to the reverse-osmosis water plant be done now that the deal with SMWA is complete.

“The $4 million for that (RO plant) is a priority,” Smithson said.

The water master plan states some of the recommended projects proposed in the next 10 years will be pushed back into a second 10-year phase pending funding.

Hammett said it is too early to speculate if customer rate increases will be needed to fund the improvements, especially since the wastewater treatment project is probably not going to “happen anytime soon.”

“Anytime you have a master plan done the consultant comes in and tells you everything that you may need to do, but some of that has some variables,” Hammett said. “The big variable, and a lot of that $40-plus million, is a wastewater treatment plant. We may not build a wastewater treatment plant any time soon unless something starts moving quickly with the mega site.”