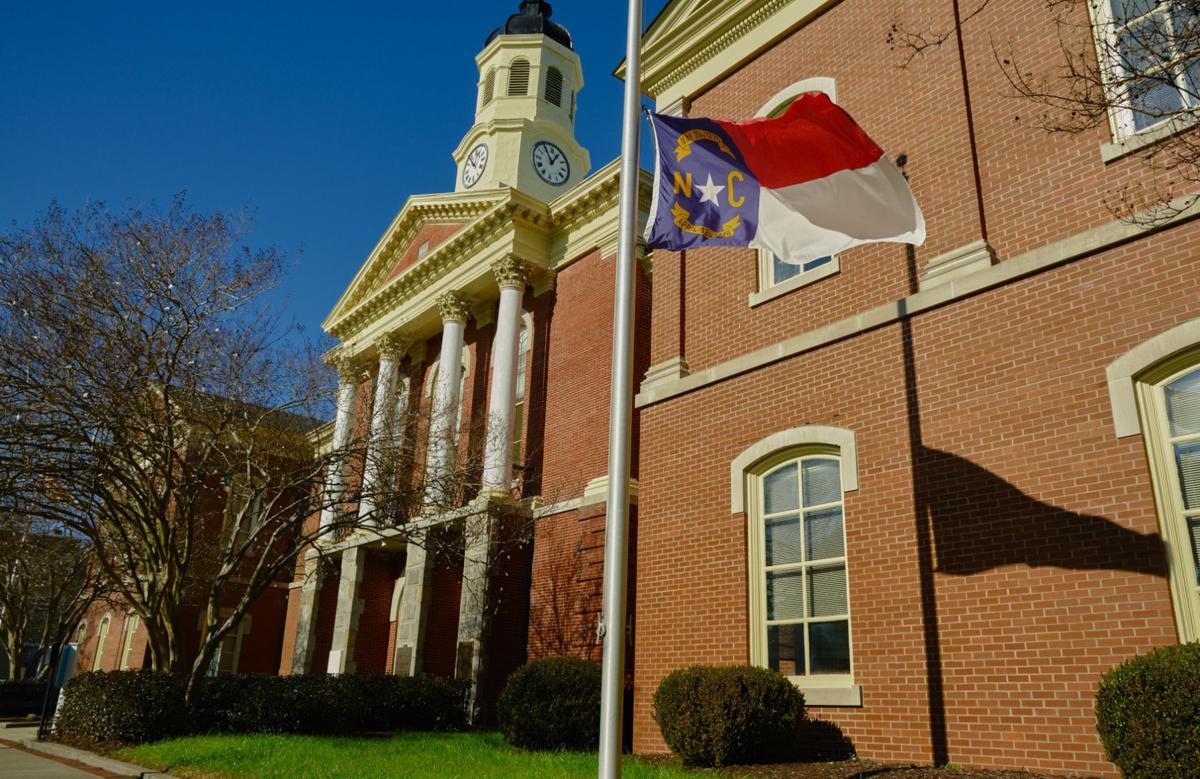 The North Carolina state flag is seen posted at half-staff Thursday outside the Pasquotank County Courthouse in honor of Pasquotank Commissioner Frankie Meads, who died Wednesday. 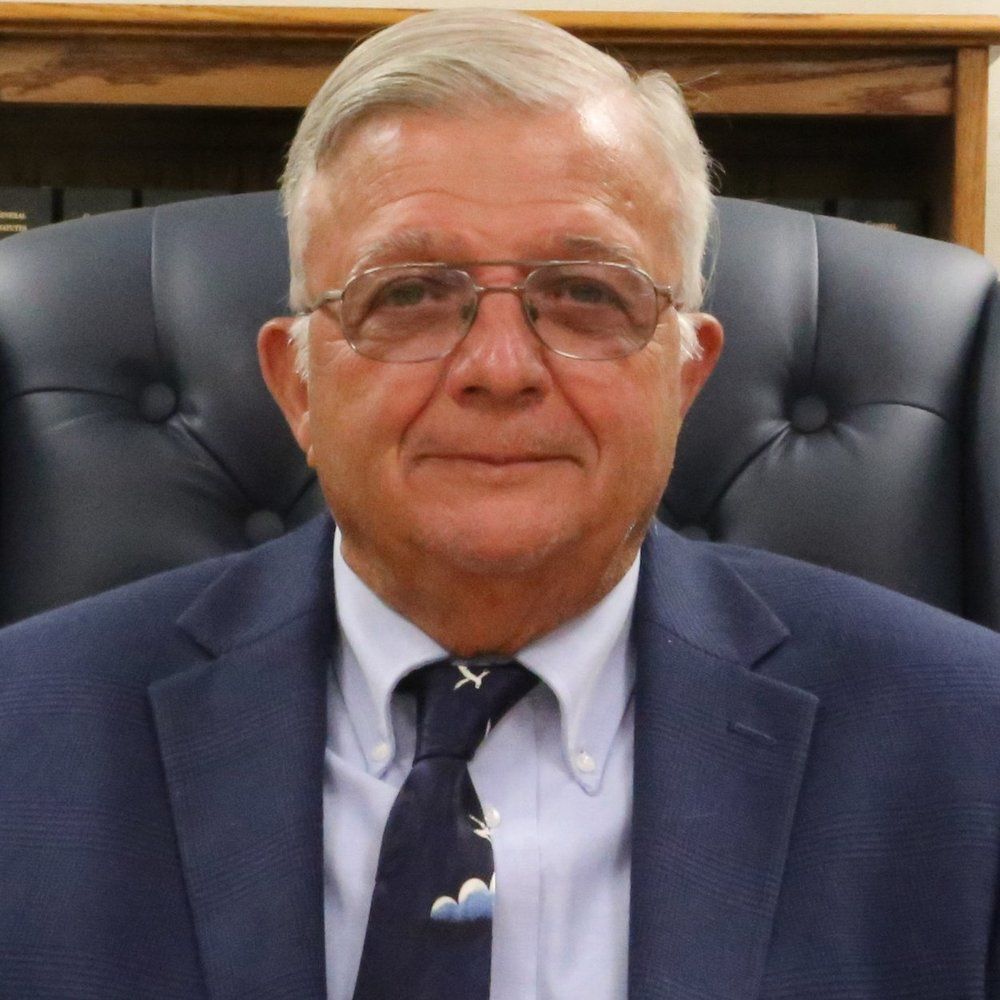 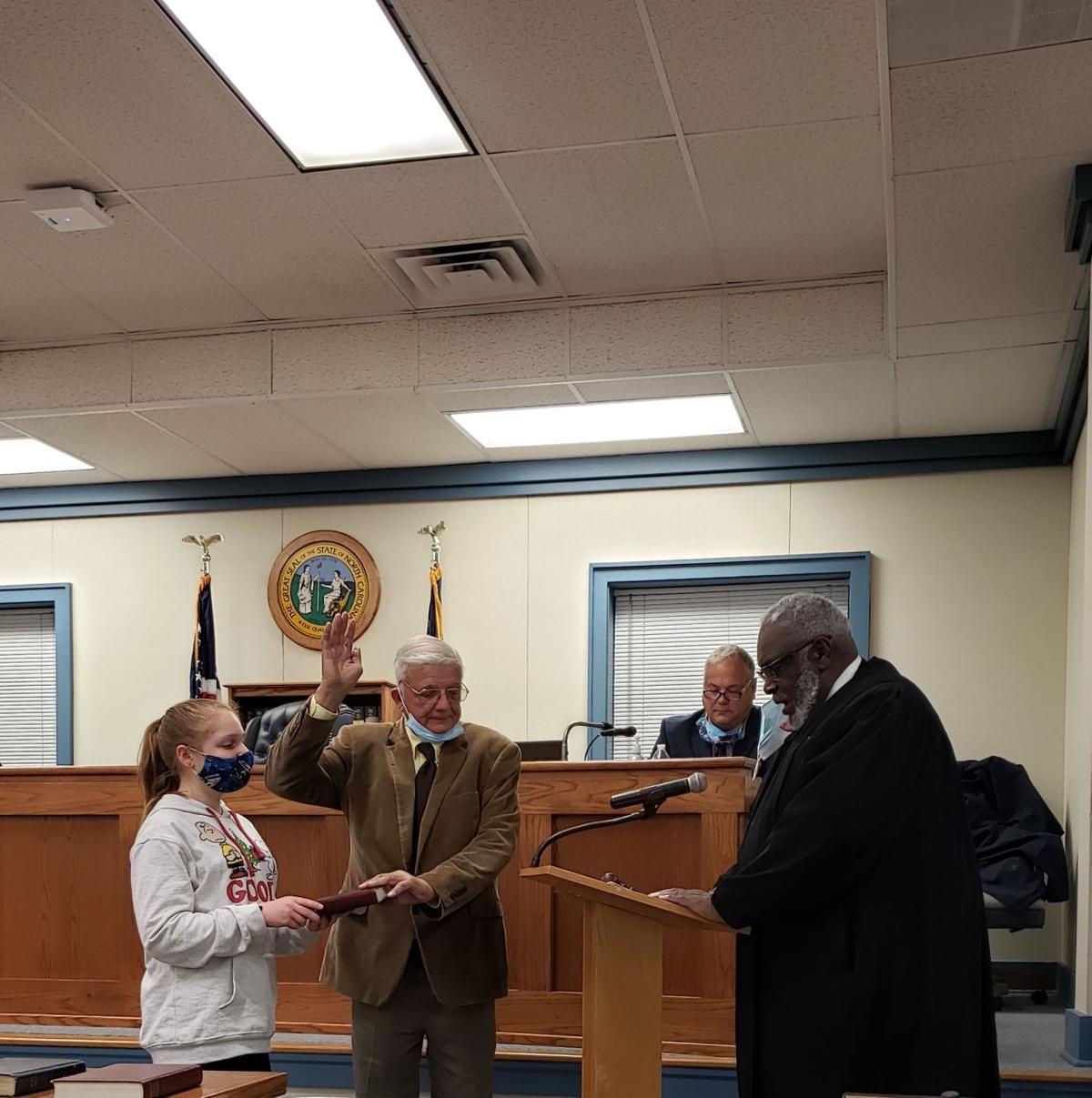 Frankie Meads (center), seen in this Dec. 7 file photo taking the oath of office for a third term on the Pasquotank Board of Commissioners, has died, county commissioners said Thursday. Administering the oath to Meads is Superior Court Judge J.C. Cole. Holding the Bible is Meads' granddaughter.

One of the best friends Pasquotank County taxpayers ever had has died.

“A tremendous and sad loss,” is how Pasquotank Board of Commissioners Chairman Lloyd Griffin described Meads’ passing.

Meads made history in 2012 when he became only the second member of the Republican Party since Reconstruction to win a commission seat in then-heavily Democratic Pasquotank County. Meads was re-elected in 2016 and 2020, running unopposed both times.

“Frankie had a lot of passion for the things he believed in,” Griffin said.

“Frankie was consistent and passionate in what he believed in,” Lavin said. “Frankie’s decisions were usually rooted in the guiding principles of efficient government, small government and low taxes.”

“Commissioner Meads was a staunch advocate of reducing the debt for Pasquotank County, even donating $1,000 toward the effort,” the county said in a statement. “Just last month, he donated three months’ pay to help a young woman battling cancer.”

County Manager Sparty Hammett said Meads was a great commissioner and an advocate for taxpayers.

“Tremendous loss for the county,” Hammett said of Meads’ death. “One of Commissioner Meads’ big focuses was reducing the amount of general fund debt. He will definitely be missed by the board, staff and the citizens.’’

At-large commissioner Charles Jordan considers his fellow county commissioners family and said that he was extremely saddened when he heard the news of Meads’ passing.

“We have a group of commissioners that work very well together and once you start working together you start to become like family,” Jordan said. “He was a very knowledgeable about things and he had very good ideas. He was passionate about Pasquotank County and he really did his homework.”

Meads served on numerous county boards during his eight years as a commissioner, including the county’s Emergency Medical Services Board, the Solid Waste/Landfill Committee, the Animal Control Board, the Albemarle Resource Conservation & Development Council, and the SPCA Board.

Flags at all county facilities are being flown at half-staff in Meads’ honor, the county said. “Our thoughts and prayers are with the Meads family,” the county’s statement reads.

State law requires that Meads’ replacement be a Republican. The Pasquotank Republican Party will have 30 days to submit a nominee to the board who lives in the Southern Outside district Meads represented to fill out the remainder of Meads’ term, which ends in December 2024.