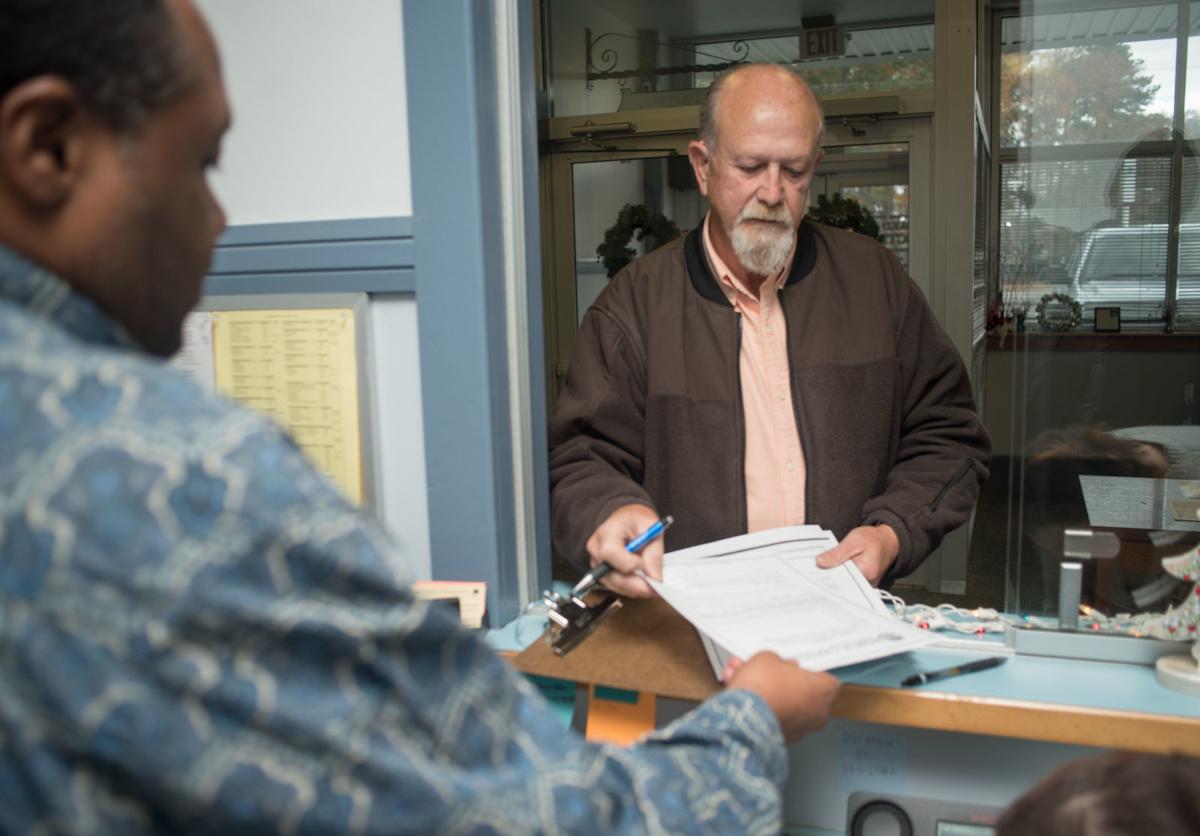 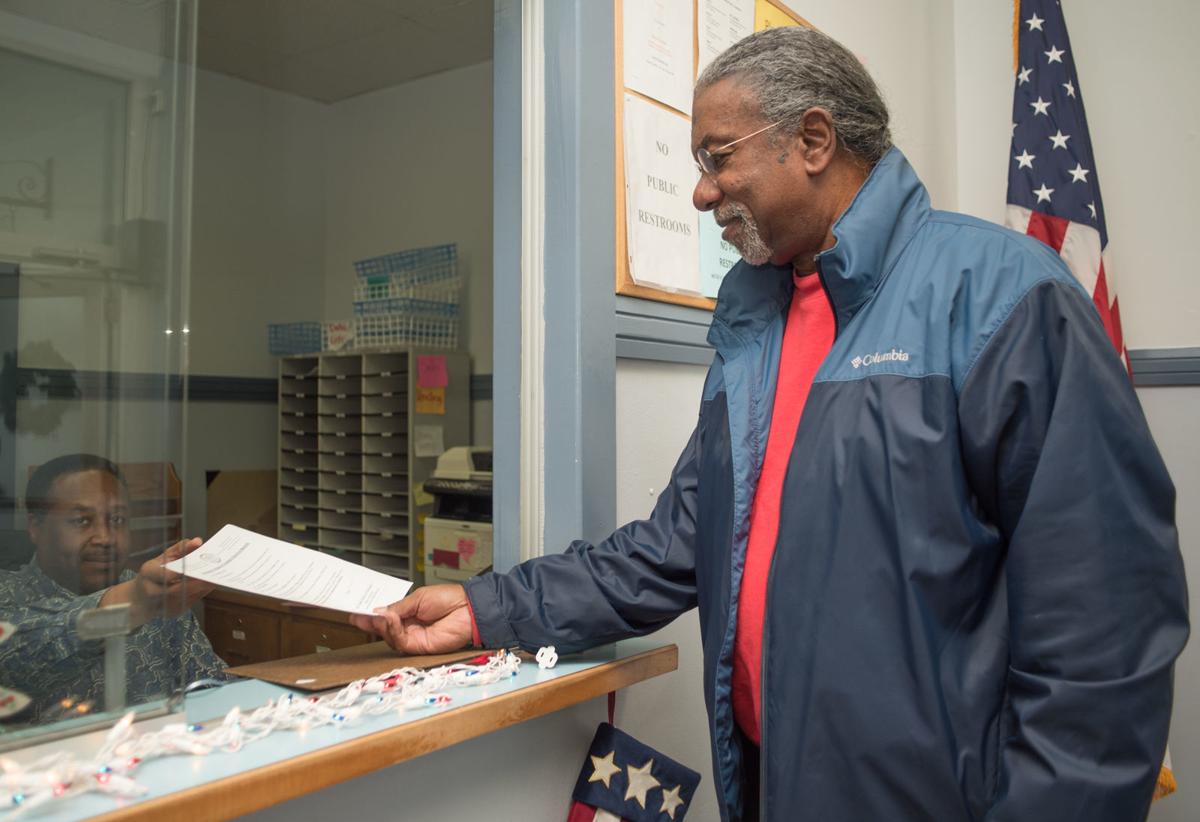 Incumbent Elizabeth City-Pasquotank Board of Education member Denauvo Robinson submits his paperwork for filing for re-election to his school board seat at the Pasquotank County Board of Elections, Monday.

Incumbent Elizabeth City-Pasquotank Board of Education member Denauvo Robinson submits his paperwork for filing for re-election to his school board seat at the Pasquotank County Board of Elections, Monday.

The president of the Pasquotank chapter of the NAACP will challenge state Rep. Howard Hunter, D-N.C., for his 5th House District seat in next spring’s Democratic primary.

Elsewhere, a slew of incumbent state legislators, county commissioners, school board members and county registers of deeds also filed their candidacies on Monday.

Also filing on Monday was Republican Bill Ward, one of several candidates expected to seek the at-large commissioner seat currently held by Democrat Jeff Dixon. Dixon has already announced he doesn’t plan to seek a fifth term next year.

Also filing on Monday was Barbara Riggs, a Democrat who will be seeking the South Mills currently held by Meiggs.

Jarvis is completing the four-year term of former Commissioner Bobby Hanig, who won a seat in the state Legislature in 2018. Hanig also filed in Currituck on Tuesday for re-election to his legislative seat. Also filing for the seat is Robert Edwin Rollason III, a Republican from Kill Devil Hills.

In Chowan County, Republican Alex Kehayes, a former county commissioner, filed for the District 2 seat on the Chowan Board of Commissioners now held by Patti Kersey. Kersey has said she does not plan to seek re-election.

District 3 commission seat that is currently held by Democrat Greg Bonner is up for election too.

Clementine White, who was appointed Pasquotank register of deeds in June, was the first candidate in line at the county elections office when candidate filing opened at noon. White was appointed by the Pasquotank Board of Commissioners on June 3 to replace Joyce Pritchard, who retired at the end of May. The March 3 primary will be the first time White’s name will appear on an election ballot. If she’s elected, White will be the first African-American woman to serve as Camden’s register of deeds.

“I was told if I worked hard and learned everything that I could that I could be the first black elected register of deeds in Pasquotank County,” White said after filing. “To be able to go in and vote and see my name, wow, it is going to be exciting, very exciting. If someone runs against me, I just have to get out there and tell voters I am the best candidate. I have been doing it for 23 years and I know the ropes.’’

White has worked for the register of deeds office for 23 years, including 10 as the assistant register deeds, and said she is the most qualified person for the position because of her lengthy service to the county. The office handles vital records such as land transactions and plats, birth and death certificates, marriage licenses and military discharge records.

Ward, a retired Pasquotank sheriff’s department lieutenant who ran unsuccessfully for sheriff in the Republican primary in 2018, was the second in line to file Monday.

“As a man of faith, I have been in prayer about this,” Ward said. “I have also spoken with several advisers and decided this is the time to make a move and run for county commissioner.”

Ward said making sure that the county operates in a fiscally responsible manner will be one of his top priorities. He also said the county needs to do all it can to push for the proposed Interstate 87 in the region and continue support of the three institutions of higher learning in Elizabeth City.

“We are in a good position financially and we need to continue to keep the ship headed in that direction,” Ward said. “We also need to look at continuing to expand our commercial park area to bring new jobs in to take some of the tax burden off of the citizens. We need to push for the designation of I-87 because we are in a good position between two deep water ports in Norfolk and Morehead City. I think that is a key position for us to be in.’’

Ward said the experience of running a countywide campaign two years ago should be a plus in his run for a commissioner’s seat and that he intends to meet as many voters face to face as possible.

“I hope that helps with name recognition,” Ward said. “I still intend to shake hands and press the flesh and let the citizens of the county see what I stand for. This county is not that large where we can’t get out and meet our citizens, and I think that is a big plus.”

In Camden, Meiggs said he’s proud of the board’s accomplishments, including the recent completion of the county’s second sewage treatment facility. Other important projects are still in the works, including the building of a new school, he said. Meiggs is seeking a fourth term.

Krainiak, who is seeking a third term, said “it’s an honor to serve with the other commissioners.” He also believes communication with the Camden County Schools is good right now.

“I think we’re on the right track,” he said.

Riggs, 63, a driver’s ed teacher for The NC Driving School and a school bus driver for Camden County Schools, said the county can do better for the schools.

“I believe that the kids are the future and that we need better schools,” Riggs said. “If we want our kids to be able to do more then we need to do more. We can just do better.”

Hanig said in a statement that he was able to accomplish a lot during his first year in the legislature but says “there is still much more to do.” He noted that he’s already preparing legislation for next year’s session.

“Over the last two years, I have driven thousands of miles up and down the district, meeting wonderful folks who I have worked with to solve problems,” he said. “Making a difference for someone is really what I enjoy most about serving in the General Assembly, and I hope the people know they can turn to me for help and to be their consistent conservative voice in Raleigh.”

Hanig said he’s been a strong advocate for conservative and family issues, including tax cuts, hurricane assistance and Second Amendment rights. He noted he voted for the born alive bill and pay raises for teachers.

“I ran my first election on promises and I am running for re-election on accomplishments,” he said. “I have built strong relationships in the district and in Raleigh which will help me accomplish much more for northeastern North Carolina.”