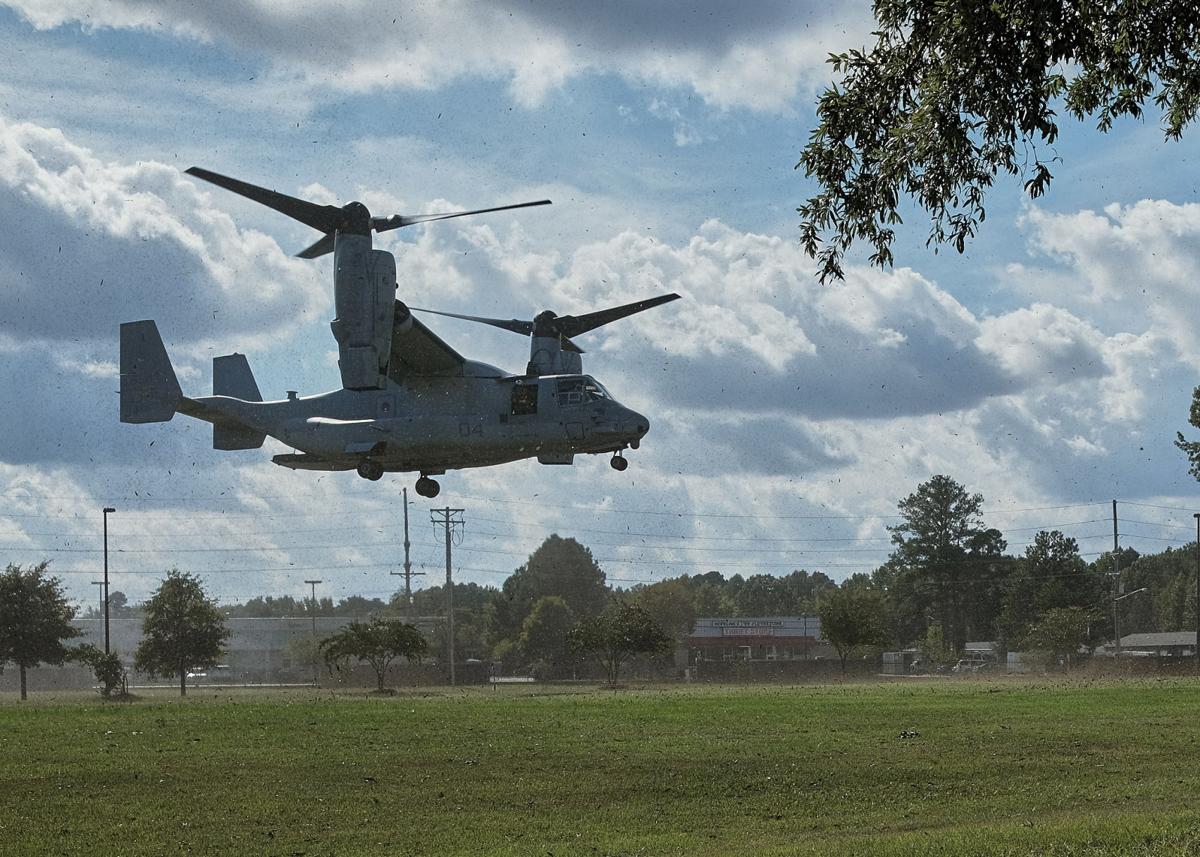 A Marine Corps V-22 Osprey vertical takeoff and landing aircraft lands on the field outside the Mickey L. Burnim Fine Arts Center at Elizabeth City State University, Thursday. Debris kicked up by the aircraft’s powerful rotor wash is seen in the air around the aircraft. 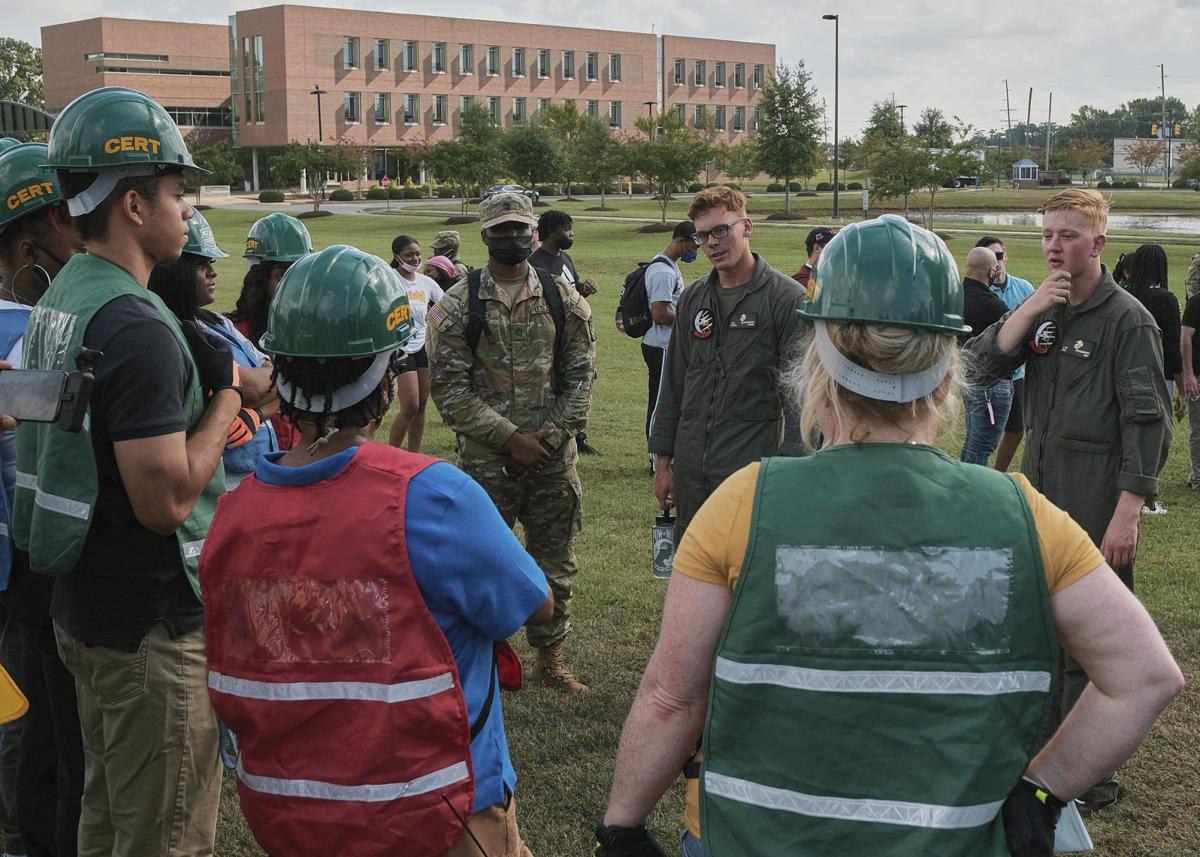 A Marine Corps V-22 Osprey vertical takeoff and landing aircraft lands on the field outside the Mickey L. Burnim Fine Arts Center at Elizabeth City State University, Thursday. Debris kicked up by the aircraft’s powerful rotor wash is seen in the air around the aircraft.

The landing marked the first time the Marine Corps Recruiting Command has ever landed an aircraft on a university campus.

“This has never been done before, so we’re making history here,” said Capt. Anthony Beaupre, an aviation assistant for officer procurement.

Beaupre was the lead contact in helping Professor Kevin Kupietz arrange the training for his students. Kupietz is ECSU’s emergency management program coordinator.

The dual-engine Osprey flew in from its home base at Marine Corps Air Station New River in Onslow County. It approached the campus from the south and crossed Weeksville Road, before landing on the west end of the field in front of the Mickey L. Burnim Fine Arts Center around 2:30 p.m. The aircraft’s powerful rotor wash snapped the limbs of a small tree and created a whirlwind of leaves and grass around the spectators on hand to watch its arrival.

The aircraft’s visit was part of a four-hour career fair held in the R.L. Vaughan Center that included participation by Marine Corps recruiters. The visit also was planned as a training opportunity for ECSU emergency management students.

Kupietz said the Marines originally approached ECSU about staging a static display at the Elizabeth City Regional Airport as part of their recruiters’ participation in the career fair. Kupietz said he suggested the Marines could extend their outreach directly to the students by landing the aircraft on campus.

Kupietz said students also could get hands-on training working with an aircraft like the V-22 Osprey, which is often used by Marines when responding to natural disasters. According to an Aug. 27 MarineCorpsTimes.com article, V-22 crews from New River were part of the U.S. humanitarian response following an earthquake that struck Haiti on Aug. 14.

Kupietz credited Beaupre for helping to make Thursday’s training experience possible. He said the captain even arranged for ECSU students to conduct stretcher-bearer training aboard the aircraft. The students took turns in groups of four carrying a student, playing the role of a patient, up the rear ramp of the aircraft and inside.

Crewmembers of the Osprey also spoke with the students and answered their questions.

One of the students participating was D.J. Reep, of Moyock. The Navy veteran said she has gained emergency management experience while volunteering with a church ministry.

“It was awesome,” she said of watching the massive Osprey land on campus. “I’m ex-military, so it’s been a long time since seeing something like that.”

Reep said she decided to enroll in ECSU’s emergency management degree program to build on the experience she’s already gained as a volunteer.

Kupietz began the day’s training about an hour before the aircraft arrived. He briefed the students on what to expect as the plane was arriving and landing. Students were next assigned roles and responsibilities to perform during the landing. Next, the students searched the field for debris and other objects that could get picked up and tossed about the aircraft’s rotor wash.

Following the stretcher training, the students gathered back at the incident command post, which was based outside the entrance to the fine arts center.

“Today’s mission went really well,” Kupietz told the class. “We had a good experience. It was a good day for learning.”