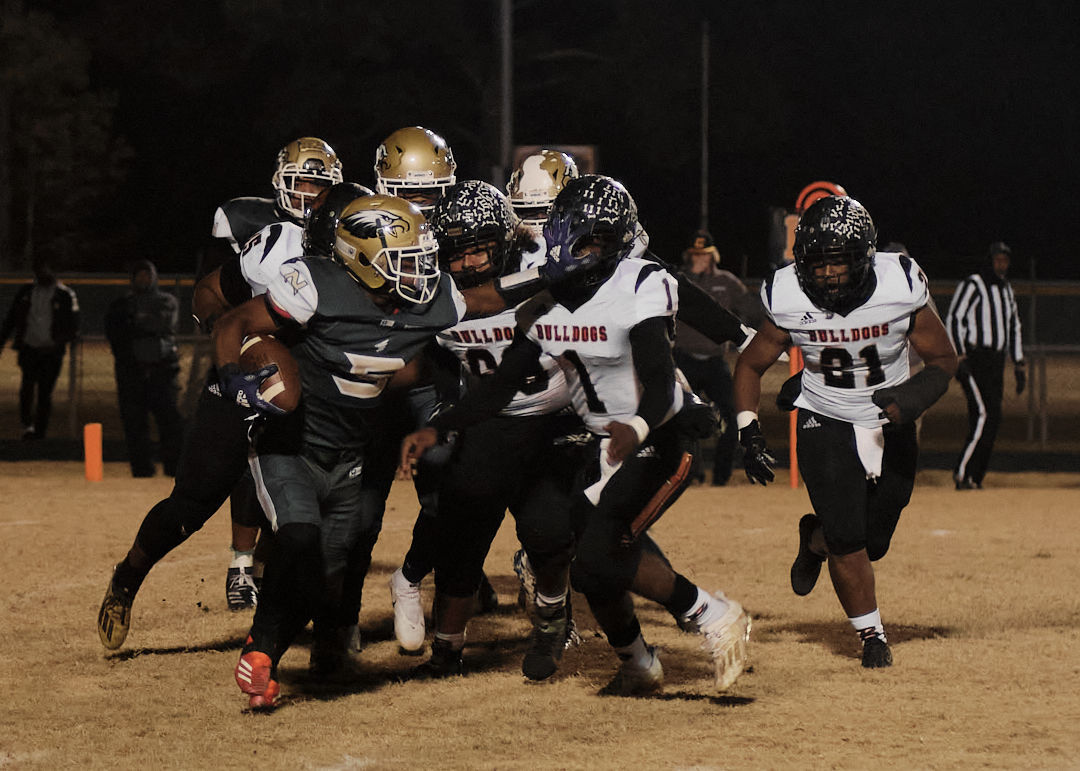 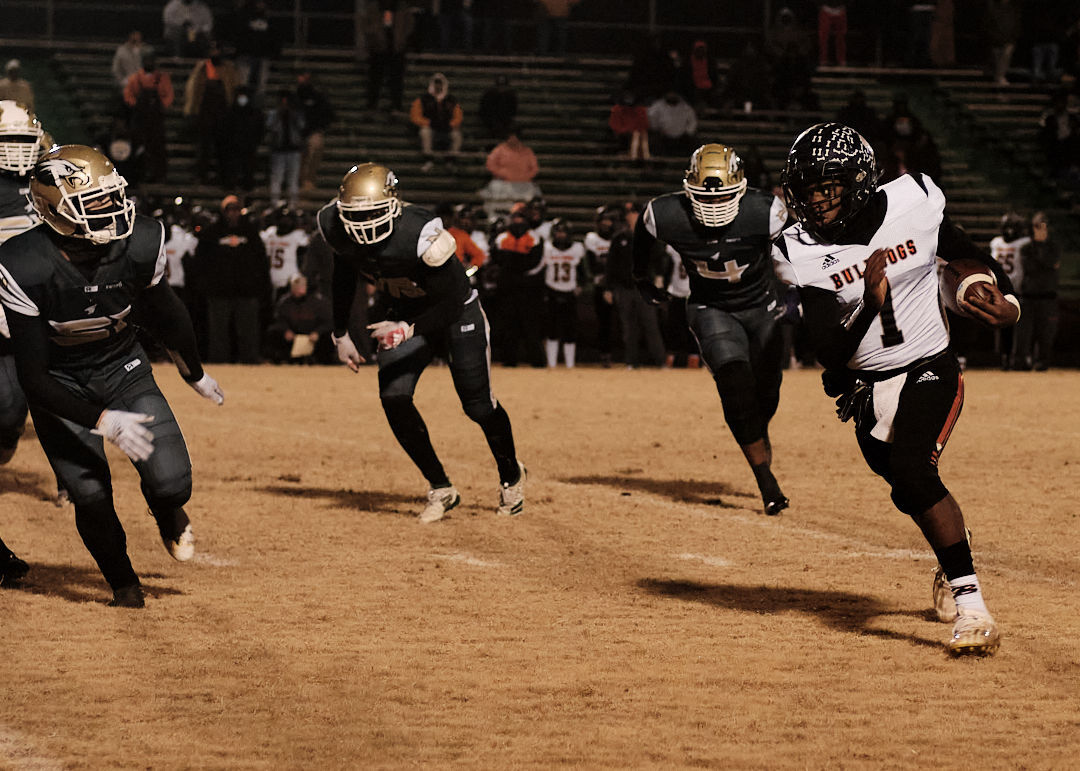 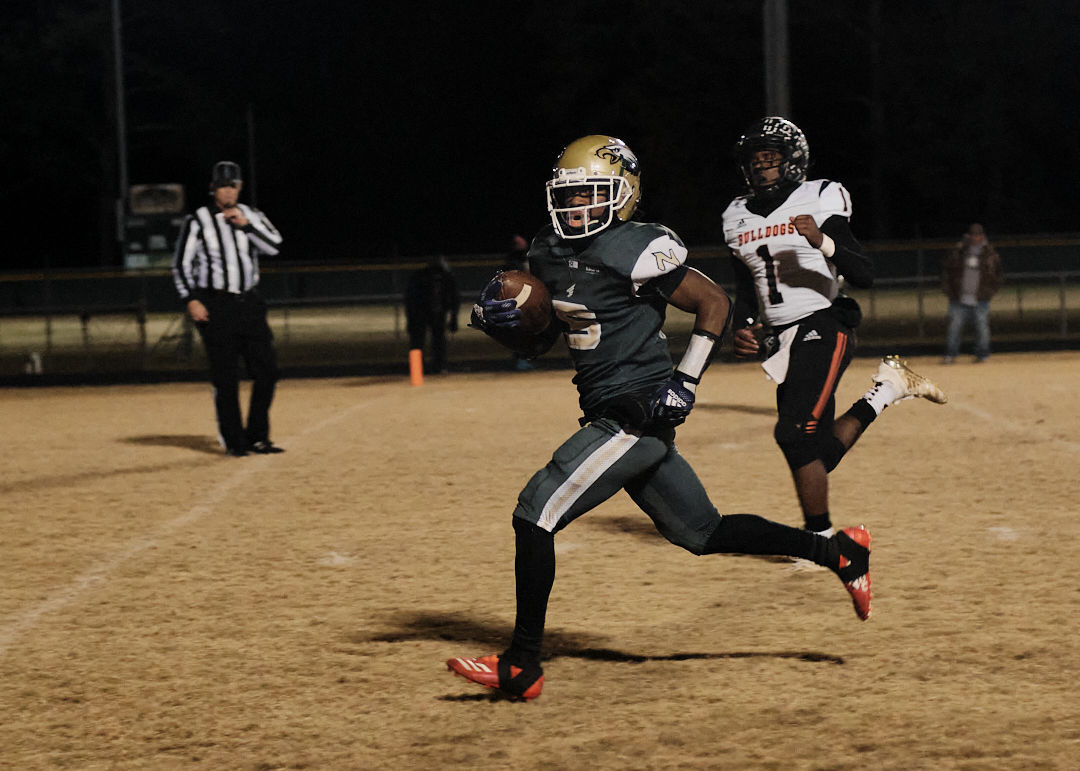 For the first time this season, the Eagles, who finished 12-1, faced a team that could match up with them in interior line play. With their running schemes and superior blocking, the 12-2 Bulldogs amassed 509 rushing yards, while attempting only one forward pass all night long.

Leading the way for Wallace was running back Kanye Roberts, a tireless workhorse who carried the ball 32 times for 255 yards and six touchdowns. Fullback Antwon Montgomery also pounded the inside for 133 yards on 18 attempts, and wingback Kaymond Farrior added 121 yards on just 12 carries with two scores.

Another significant factor contributed to the Bulldogs’ success. The Eagles failed to cover four onside kicks, giving Wallace four more possessions (11 to the Eagles’ seven) in the game. The recoveries by the Bulldogs special teams gave their offense a short field to work with, and kept a tired Northeastern defense on the field.

Like two evenly matched heavyweight fighters, the teams traded blows in the first quarter. Wallace received the opening kickoff, and marched from their own 35 yard line all the way to the Northeastern five. A fourth-down pass sailed out of the end zone, and the Eagles took over on downs.

The hometown team went on a long drive of their own, moving in 13 plays to the Bulldogs’ 27-yard line, keyed by hard running from E.J. Gatling and Tyselle Spencer. However, four plays lost five yards, and Wallace began their second possession at their own 32-yard line.

As the opening quarter ended, five running plays had advanced Wallace into Northeastern territory. Two plays later, Roberts took a handoff, broke free of right tackle, and raced 33 yards for the first score of the game. The kick by Lon Teachey made the score 7-0 at 11:24.

The Eagles, confident that they could move the ball, recovered the Bulldogs’ first onside kick in great field position near midfield. Spencer ran 11 yards for a first down, but a high snap on the next play resulted in a loss of 15 yards. Quarterback Jalen Melson passed to Shamar Sutton for 16 yards, and Spencer rushed for eight, but Wallace stopped a fourth-down sweep from a split formation for no gain.

The Bulldogs needed just four plays to go up by two scores. A 50-yard run by Roberts set up an 8-yard jet sweep by Farrior to pay dirt. The touchdown made the score 14-0 at 7:50 left in the first half.

Knowing that they would receive the second half kickoff, the Eagles had to feel that a sustained drive with a score would put them right back in the contest. However, they failed to cover the kickoff, and just two plays later, Roberts had his second touchdown, and Wallace led 22-0 after a two-point conversion.

Regaining their focus, the Eagles responded with an eight-play drive to finally get on the scoreboard. On second down from the Wallace 23, Melson hit Gatling on a short hook pattern. The senior made two defenders miss, and ran in for the touchdown. He then caught a pass for the two-point conversion, making the score 22-8.

Unfortunately, four minutes left was plenty of time for the Bulldogs to grind out another score. Ten running plays pushed the lead back up to three scores as the half ended.

With their quick-score ability, the Eagles had good reason to believe they could climb back into the game with a lot of football yet to play. But those hopes were crushed when they lost the onside kick to start the third quarter. In just three plays, the Bulldogs scored, and had an insurmountable lead at 36-8.

Northeastern responded with a drive that should have started the second half. A mix of passes and runs culminated in a four-yard touchdown run by Devaughan Bell. The score was 36-14, but the Eagles could not get any closer.

Adding to their difficulty in stopping the Bulldogs was the loss of their outstanding middle linebacker Rashawn Lister. The senior was injured making a hard tackle in the first half, and was taken by ambulance for medical treatment.

Never giving up, the Eagles gave their fans one more thrill to remind them of the successful season. Shamar Sutton took a short pass from Melson in the flat, split two defenders, and outraced everyone for a 52-yard score.

“It was just not our night, we didn’t play well,” said Northeastern head coach Antonio Moore, who shook his head when asked about the four lost onside kicks. “That has to be a record. To give them credit, we couldn’t just key on one of their backs. Their different running plays made use of each of their best abilities. They (Wallace) played a perfect game.”

Moore and his assistant coaches remained positive as they each addressed the team on the field after the game. They reminded them of all the hard work they had put in all season, how they had advanced much further than many thought they could at the start of the year.