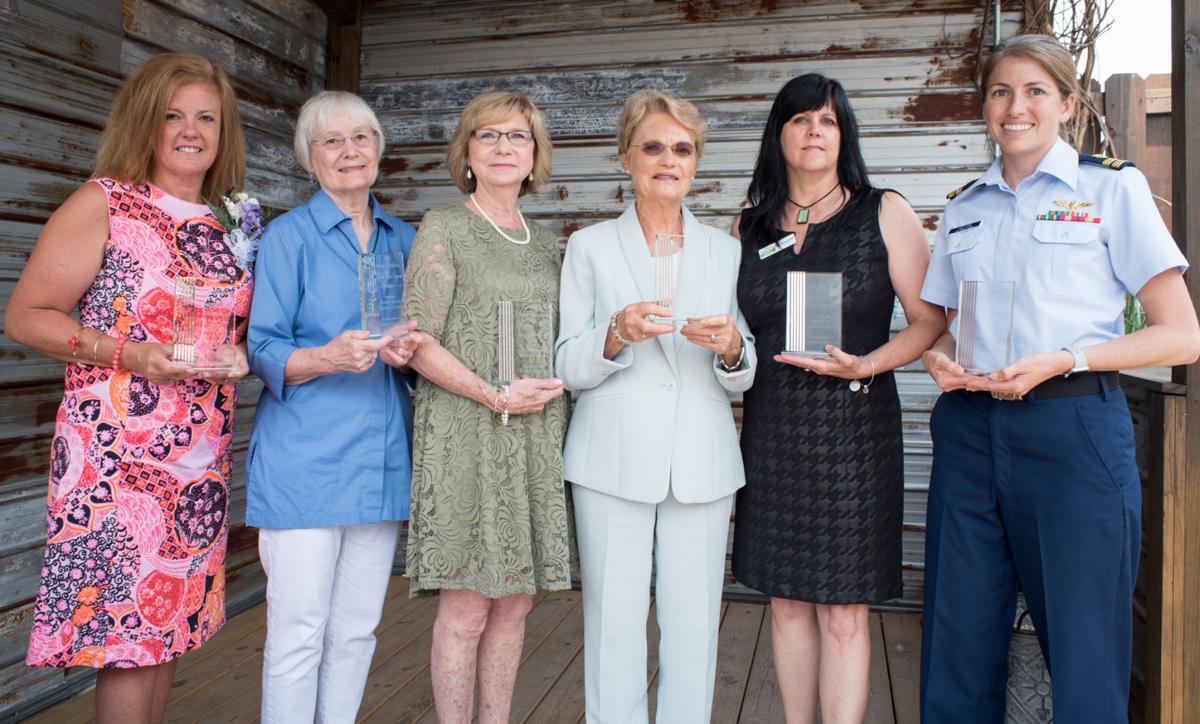 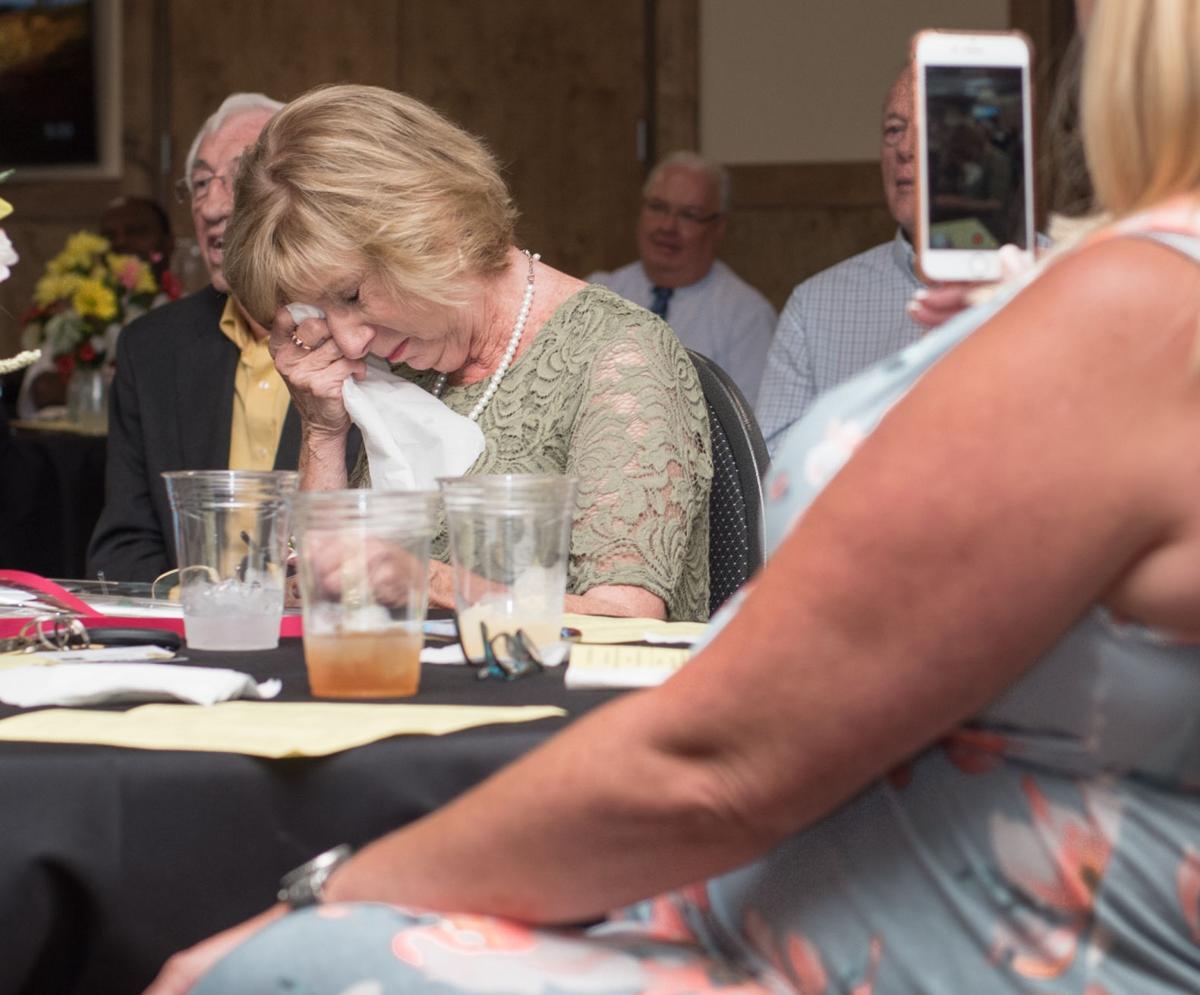 Ginger O'Neal, director of the Small Business Center at College of The Albemarle, wipes away a tear while listening to COA spokeswoman Amy Alcocer discuss O'Neal's accomplishments at COA and in the community during the Elizabeth City Area Chamber of Commerce's annual Women of Excellence Awards luncheon at The Carolina Center, Wednesday. O'Neal was one of six winners of the award.

Ginger O'Neal, director of the Small Business Center at College of The Albemarle, wipes away a tear while listening to COA spokeswoman Amy Alcocer discuss O'Neal's accomplishments at COA and in the community during the Elizabeth City Area Chamber of Commerce's annual Women of Excellence Awards luncheon at The Carolina Center, Wednesday. O'Neal was one of six winners of the award.

An indefatigable Coast Guard lieutenant, a devoted school principal and a champion of the Albemarle's small businesses are among the Women of Excellence recognized by the Elizabeth City Area Chamber of Commerce Wednesday.

The Chamber presented the awards to six women during its eighth annual Women of Excellence luncheon, held at The Carolina Center in the Pasquotank County Commerce Park. Chamber President Holly Staples told the gathering the Chamber received exceptional nominees from various community organizations, making it hard to choose just six of the 20 nominees for awards.

Bell, a retired English and social studies teacher now working as a distributor of nutritional and personal care products, has served the community with “drive and zeal” for many years, said her friend, Frances Gass. She's a member of 10 community organizations, and has held leadership positions in her church, First Baptist, and Arts of the Albemarle, Gass explained.

Bell also initiated the Chamber's Women of Excellence program, helping sponsor the first six events, Gass also said Bell was active in politics and encouraging people to vote. She strongly supported her husband, John Bell, in his successful races for mayor of Elizabeth City, she added.

Thanking the Chamber for the award, Bell praised the growth of the Women of Excellence awards, commenting they started small with a breakfast at College of The Albemarle.

Bell also thanked her husband, saying “none of this would have been possible without his support.”

Cobb, principal of Weeksville Elementary School, is among those leaders who help others “become a better version of themselves,” said Jennifer Canalis, who nominated her for the award.

Canalis said Cobb has built a strong rapport with her students and encouraged teachers to do the same. She organized bus tours to Weeksville's communities so teachers could better understand the students they serve — many of whom live in poverty — and offer school supplies, she said.

Cobb also works closely with local churches to support students and their families, and recently got a grant to establish a small library at River's Landing apartments.

“Mrs Cobb wears her heart on her sleeve and anyone around her feels her passion,” Canalis said.

Cobb thanked her coworkers, family and friends for supporting her, and commented that being Weeksville's principal is both the most difficult and rewarding job she's ever had.

U.S. Coast Guard Cmdr. Jerry Krywanczyk, of Air Station Elizabeth City, said that Gillikin is among the best officers he has ever served with, and is proud to have nominated her for the Women of Excellence award.

“During this effort, Lt. Gillikin spearheaded an exhaustive 54-day, around-the-clock support,” he said. “We basically did 24-hour operations out of here in support of Hurricanes Harvey, Irma and Maria.”

He also said Gillikin oversaw 15,000 hours of “surge maintenance” in support of 149 flights, delivering cargo and helping some 1,100 people, including evacuees from Puerto Rico.

Gillikin said she was honored to meet other Women of Excellence winners on Wednesday, and said her successes were thanks to those she serves under and with.

Gragson, a retired Elizabeth City State University music professor, has performed and promoted music for over 50 years, said her friend Cynthia Mastro. Several of her students have gone on to become professional musicians, including one who succeeded Gragson as organist for Christ Episcopal Church.

Mastro said Gragson has been active in the community and professional music organizations, and she's earned a doctorate in piano performance. After her retirement, she worked in Norfolk and Portsmouth, Virginia, as a choir director, and now works as the organist and choir director for Cann Memorial Presbyterian Church, Mastro said.

“In short, Rachel loves music, and loves sharing it with other people,” she said, calling Gragson’s musical abilities a “blessing to Elizabeth City all these years.”

Gragson said she didn't expect to win the award, calling it an honor just to be nominated. She also expressed regret that her biggest supporter over the years, her late husband, couldn't be in attendance.

“I'm sure he would be happy and proud of me today,” she said.

Carson said Malenfant has organized and joined in “cleaning parties” to make downtown buildings more attractive, been deeply involved in the N.C. Potato Festival and other downtown events, and worked to help bring new businesses downtown, including the city's first microbrewery and new apartments in the Weatherly building.

Carson also credited Malenfant with championing the restoration of Pailin's Alley, providing an attractive place to eat and drink outdoors next to Hoppin' Johnz and the Ghost Harbor Brewing Company.

Malenfant, notably a former downtown business owner herself, told the crowd she loves her job and Elizabeth City, and noted improvements downtown, like other places in the community, reflects a team effort.

“No one does anything alone, you all know that,” she said.

O'Neal is the director of the Small Business Center at COA, where she has advised entrepreneurs throughout the region for years, said Amy Alcocer, a spokeswoman for COA, who presented the award to O'Neal alongside Lynn Merritt.

“Her energy and unfailing enthusiasm outside her professional duties at COA is the reason I'm nominating Ginger O'Neal,” Alcocer said.

Alcocer noted O'Neal has served for 14 years as an ambassador for the Chamber of Commerce; a Chamber PowerPoint also noted O'Neal's civic involvement includes volunteering for both the N.C. Potato Festival and Coast Guard Day, plus service as a teen leader for 4-H and a Sunday school teacher.

Thankful for the award, O'Neal said she loves her job, and helping people achieve their dreams.

“Do you know how wonderful it is, to say that I get up every single day and help people realize their dreams?” O'Neal said.

She also joked that, with some clients, “sometimes I think I might just go in and run the business for them.”

O'Neal also said she's helped entrepreneurs spend their money wisely, whether they're starting up or looking to grow their businesses.