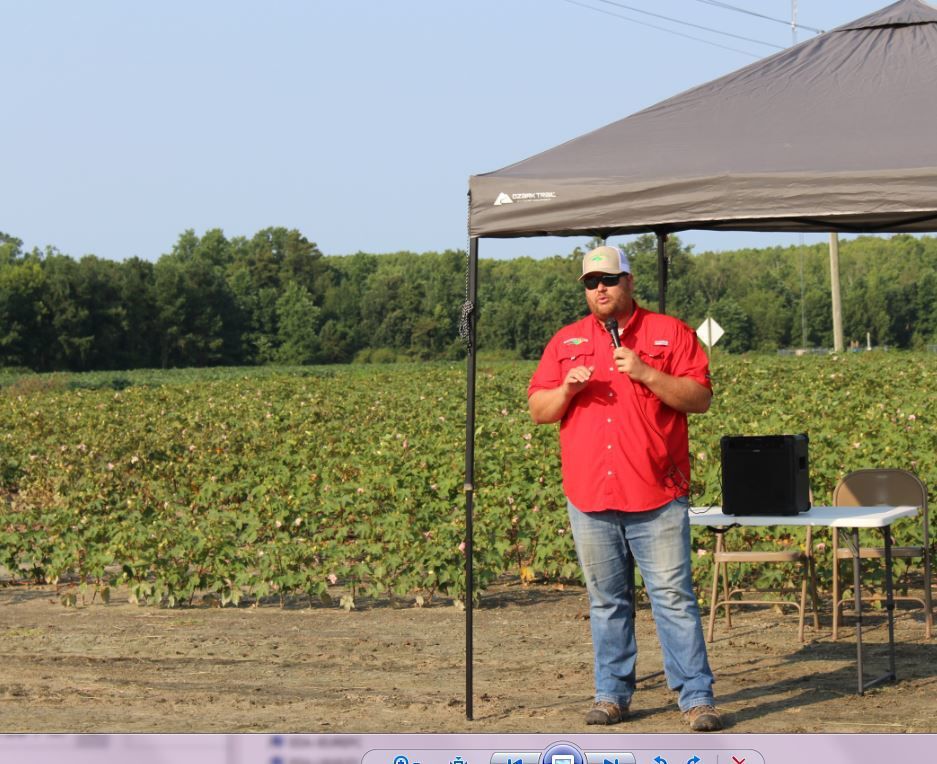 Charlie Cahoon, a weed specialist with N.C. State Extension, talks to farmers about herbicide resistance in ryegrass as he stands next to a cotton field on JM Parrish and Son Farms during the Northeast Summer Ag Expo on Thursday, July 29. 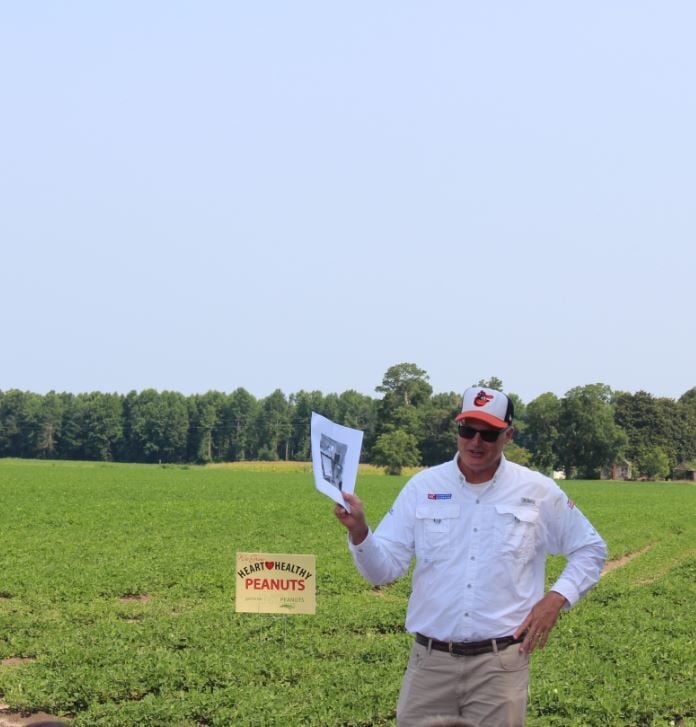 David Jordan, a Chowan County native who is a peanut specialist with N.C. State Extension, talks to farmers about new developments in peanut research at a stop on Beech Fork Farms during the Northeast Summer Ag Expo in Rocky Hock, Thursday.

Charlie Cahoon, a weed specialist with N.C. State Extension, talks to farmers about herbicide resistance in ryegrass as he stands next to a cotton field on JM Parrish and Son Farms during the Northeast Summer Ag Expo on Thursday, July 29.

David Jordan, a Chowan County native who is a peanut specialist with N.C. State Extension, talks to farmers about new developments in peanut research at a stop on Beech Fork Farms during the Northeast Summer Ag Expo in Rocky Hock, Thursday.

ROCKY HOCK — This could be a big year for cotton in Perquimans County.

Daniel Lilley, field crops agent for Perquimans County, said in an interview at the July 29 Northeast Summer Ag Expo that Perquimans farmers have planted more cotton this year than last year. The number of growers planting peanuts has decreased over the past several years but the growers who still plant peanuts seem to be maintaining about the same acreage, he said.

Lilley said the weather last year was less favorable for planting cotton and that probably contributed to a dip in cotton acreage last year.

Jim Parrish of JM Parrish and Son Farms in Rocky Hock grows crops including peanuts and cotton on his farm, which along with Beech Fork Farms served as host site for the Summer Northeast Ag Expo.

In an interview at the expo he said both crops are looking pretty good.

Commodity prices also look good right now, he said. The irrigation should make a difference for the crops and pay off because of decent prices, he said.

Parrish said the southern end of Chowan County has gotten pretty good rains. In the central and northern sections of the county dry weather along with heat has posed a challenge, he said.

Richard Bonanno, associate dean of the College of Agriculture and Life Sciences at N.C. State University and director of N.C. State Extension, noted that the counties provide buildings for Extension and pay half the salary of staff.

He said the cooperation from counties and the farmers who host field trials allows the Extension service to carry out its mission of getting up-to-date research out to farmers in all participating counties.

The research can help farms be more productive and profitable, he said.

“We can’t do much about prices but we can help you out with other stuff,” Bonanno said.

A field near the intersection of Evans Church Road and N.C. Highway 32 North, which is part of JM Parrish and Son Farms, was the site for the cotton presentation. Austin Brown, Extension director for Camden County, welcomed farmers to the site and introduced the presenters.

The state has a robust Extension team that works on cotton, Brown said.

Charlie Cahoon, an Extension weed specialist at N.C. State University, talked about the “emerging issue” of Italian ryegrass. Growers in the southern Piedmont region of the state are seeing a lot of problems with that weed now and those problems eventually will get to the northeastern part of the state.

The problems have to do with ryegrass that develops resistance to herbicides.

“There already is Roundup-resistant ryegrass in the northeast,” Cahoon said.

For situations in which a glyphosate herbicide will not work the most consistent choice for controlling ryegrass is Paraquat.

Growers in the northeastern part of the state can avoid getting a Paraquat-resistant ryegrass through a number of strategies, including using fall residual herbicides, he said.

“This is something to prepare for, to be thinking about,” Cahoon said. “That’s really the hot topic right now.”

Cahoon told the growers gathered at the site about a farmer in the southern Piedmont who ended up with a herbicide-resistant ryegrass problem that was so bad it forced him to delay planting his corn until June because the corn was getting choked out by ryegrass. The late planting cut the yield of his corn crop at least by half, he said.

“That’s the horror story that you want to avoid moving forward,” he said.

David Jordan, a Chowan County native who works as a peanut specialist with N.C. State Extension, made a presentation at Beech Fork Farms on Harris Landing Road in Rocky Hock about new developments in peanut production.

Both Jordan and N.C. State Extension peanut entomologist Rick Brandenburg alerted growers to the likelihood that some chemicals that have been effective in controlling pests in peanuts and have been widely used for years may be phased out over the next few years because they are banned — or in some cases are likely to be banned soon — in European markets and other important export markets.