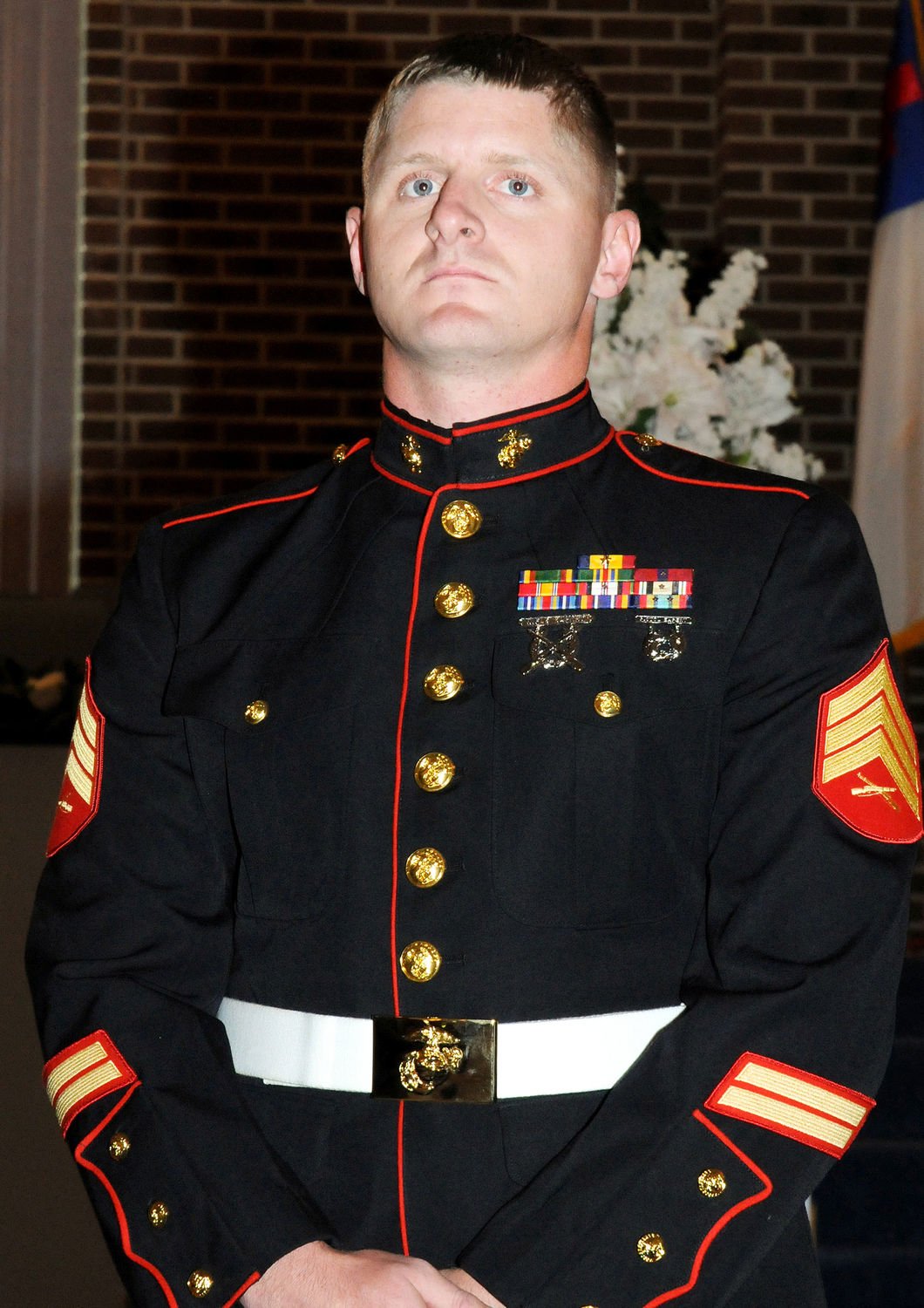 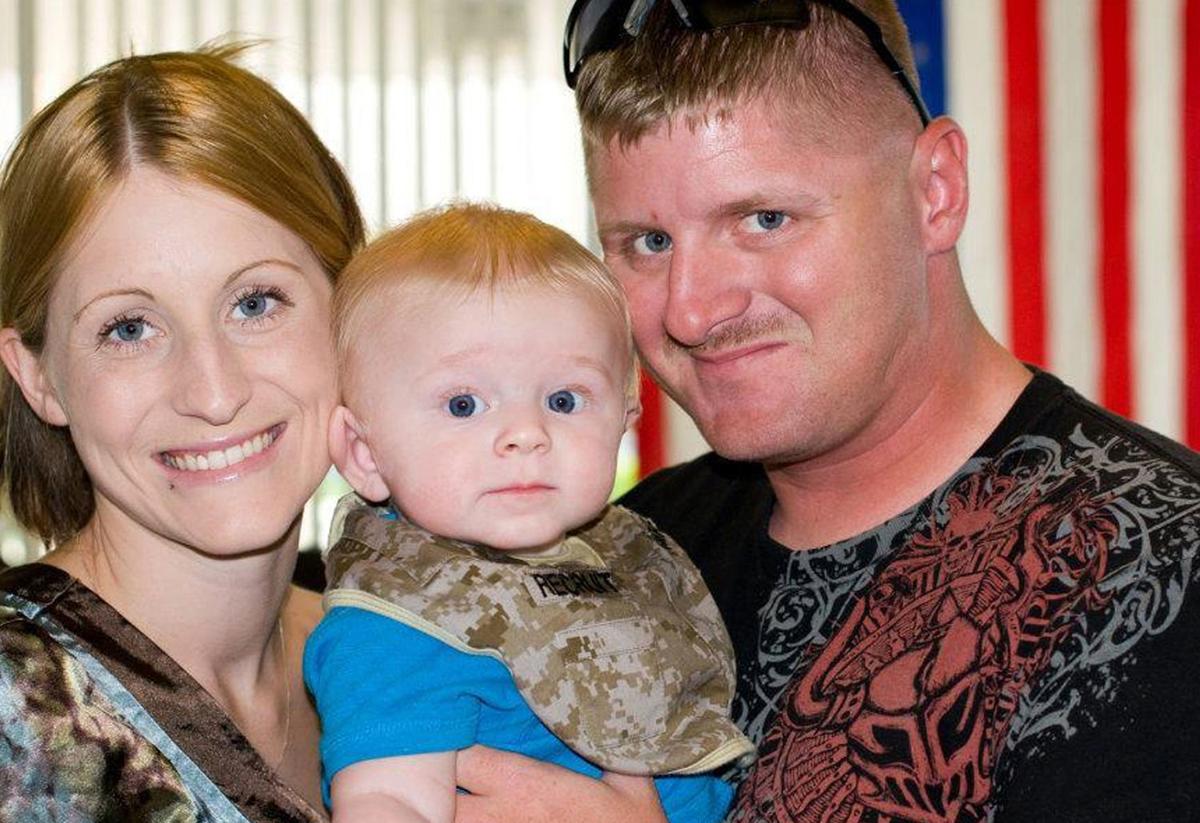 Sgt. Christopher J. Jacobs, his son Christian, and his wife Brittany Perry Jacobs, are seen in this undated photo.

Sgt. Christopher J. Jacobs, his son Christian, and his wife Brittany Perry Jacobs, are seen in this undated photo.

It is a text message that will last a lifetime.

Just hours before he was killed in a training accident, Marine Sgt. Christopher J. Jacobs texted his wife Brittany that he had enjoyed a good night’s sleep the night before.

“I love you guys,” he typed on the phone and hit the send button, transmitting his last words to his wife and young son waiting in Belvidere.

“We love you too, baby,” replied his wife.

Brittany received word of his death the following day while planning a trip to California to spend  Halloween with her Marine husband so the soldier could experience his first Trick or Treat fun with his nine-month-old son.

Instead of trick or treating this year, Brittany planned a funeral.

“He went out to train Monday but he was supposed to be back in Wednesday or Thursday,” said Brittany. “We were going out there to celebrate Halloween with him. He was giving out instructions during a training exercise and let the younger Marines drive the vehicle when it (the vehicle) slipped into a ravine.”

She describes her husband as a gung-ho Marine, one who gave his all for his country and the Marine Corp. He was a living example of the Marine Corp motto: Semper Fi - always faithful.

“Chris ate, slept, and breathed Marines,” remembered his wife. “His mother, father, and two grandfathers were all Marines.”

Brittany, formerly Brittany Perry, a 2004 graduate of Perquimans County High School, met her husband when he was stationed in Virginia but lived in Elizabeth City. They were married on July 4, 2009.

“He worked some as a bouncer at Level’s in Elizabeth City,” she remembered. “Folks there knew him as Jake. He also loved to hunt, fish, and mixed martial arts.”

But, mainly, Chris was a good family man and a good Marine, she said. And, he loved his country.

Once his service to the Marines was completed, Brittany says Chris planned to move to Perquimans County so he could spend more time with family and raise his son in the country.

Forever a patriot, Sgt. Jacobs’s body was met by the Patriot Guard after being flown to Norfolk over the weekend. The Patriot Guard is a group of volunteer patriotic motorcycle riders who pay respect to those heros who die risking their lives for America’s freedom. The 16-member guard accompanied his body from Norfolk to the Hertford funeral home Saturday night.

Funeral services for Jacobs will be held Saturday at 11 a.m. in Calvary Pentecostal Holiness Church in Belvidere, the same church in which the couple married two years ago. The same pastor who blessed them as a newly married couple will now offer peace and comfort as they say good-by to the fallen soldier, husband and dad.

Brittany says the Patriot Guard is expected to attend the funeral as well. Plans are to bury Jacobs in Arlington National Cemetery with full military honors at a later date.

“He was the love of my life and a wonderful dad,” said Brittany. “He will forever be my hero.”

With Veterans Day just a week away, Brittany had planned to take a picture of their son sitting near the brick bearing his father’s name that is included in the Veterans Monument located on the historic courthouse square in Hertford. It was to be a gift for her husband.

Visitation with the family will be held Friday evening at Calvary Pentecostal Holiness Church from 6-8 p.m. Memorials may be made to a fund established to help their son, baby Christian Jacobs, at the State Employees Credit Union.