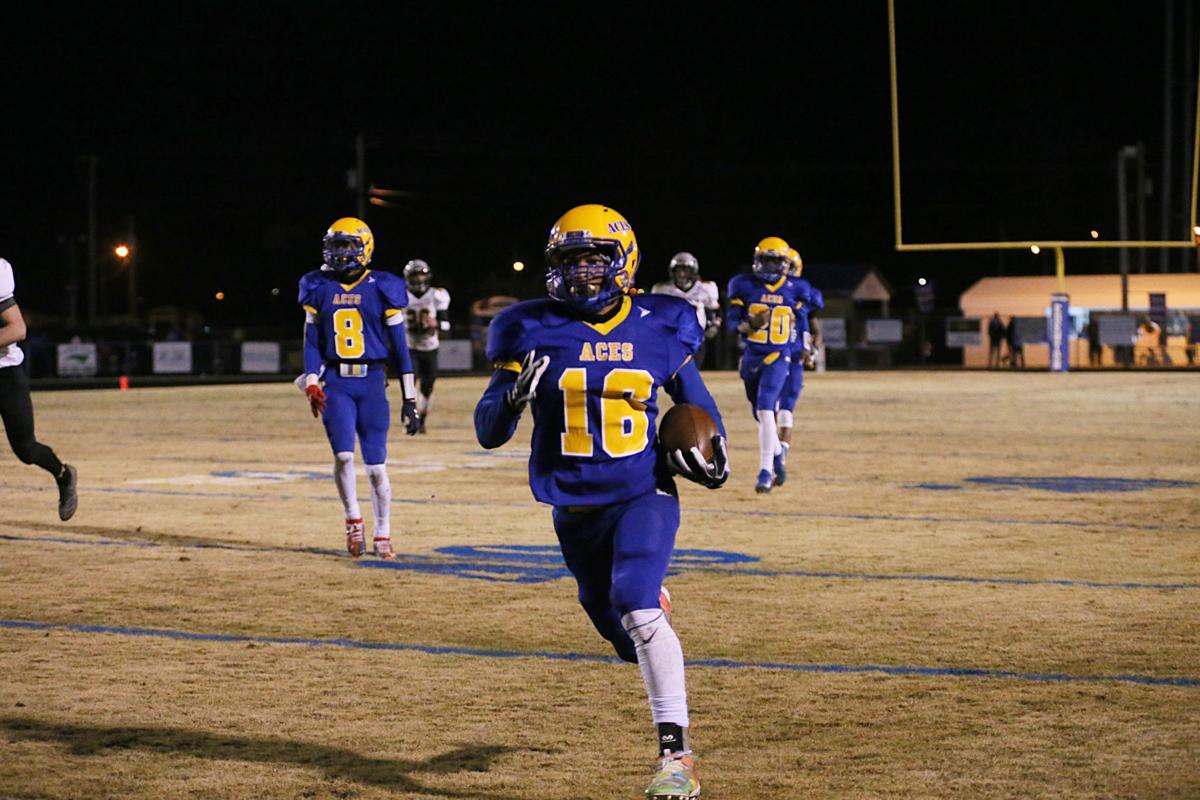 John A. Holmes quarterback Mitjonta Stanley (16) leads the Aces into their third straight meeting with Tarboro in the 1AA East Regional final tonight in Tarboro. 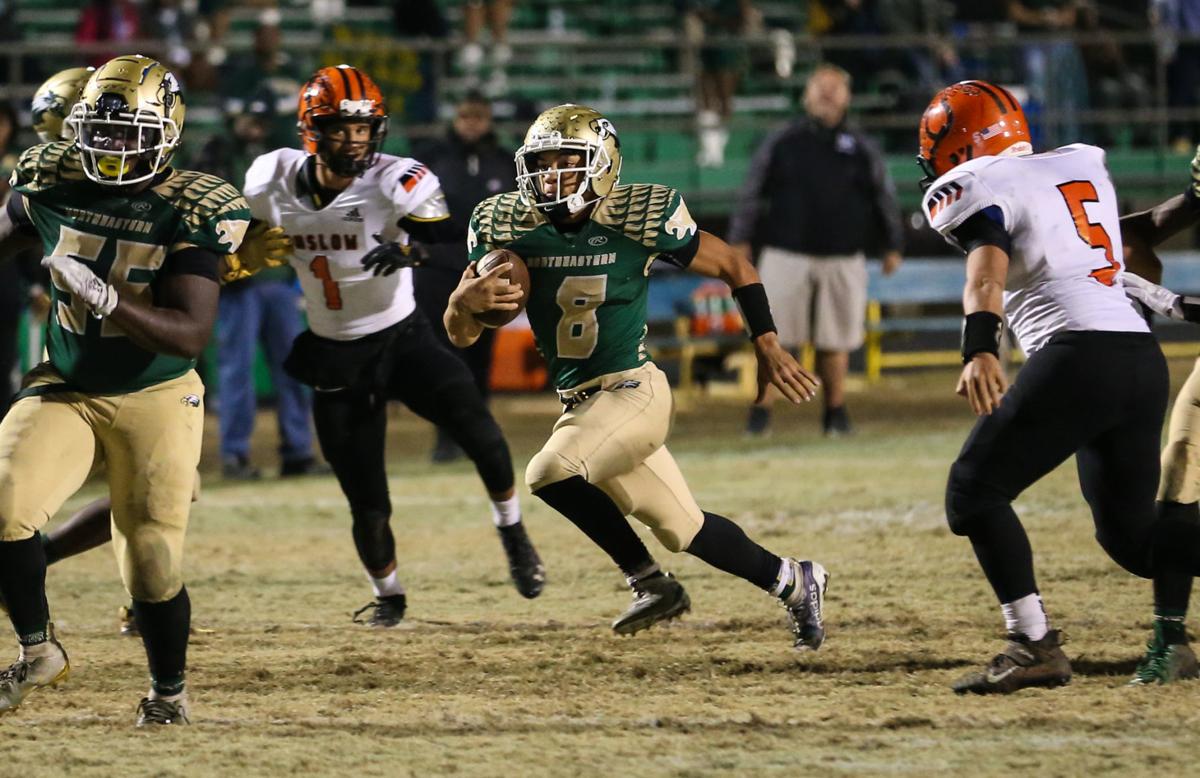 Holden Hodge (8) and the Northeastern Eagles play in their second consecutive 2A East Regional final tonight as they travel to Clinton.

John A. Holmes quarterback Mitjonta Stanley (16) leads the Aces into their third straight meeting with Tarboro in the 1AA East Regional final tonight in Tarboro.

Holden Hodge (8) and the Northeastern Eagles play in their second consecutive 2A East Regional final tonight as they travel to Clinton.

Once again, the John A. Holmes Aces and the Northeastern Eagles are in their respective East Regional finals.

It’s the second season in a row that both teams represent the Daily Advance’s coverage area in the fourth round of the playoffs.

Northeastern managed to be the one to win its game last year as it defeated Southwest Onslow in the 2A East Regional final and made it to the state championship.

John A. Holmes, on the other hand, ran into the wall that was Tarboro in the 1AA east for a second straight year.

In 2017 and in 2018, the Aces had dominating seasons end in blowout losses on the road against the Vikings.

Edenton is hoping the third time is the charm as the No. 2 Aces yet again go up against No. 1 Tarboro the week before the state championship.

“They’re a tremendous team and it’ll take a tremendous effort to be able to compete with them,” John A. Holmes coach Paul Hoggard said.

Tarboro (13-0), much like Edenton, has scored a bunch of points per game while also pitching nine shutouts on defense.

The Vikings have won 43 straight games over the last three years including 50-7 and 48-7 victories over the Aces in the last two regional finals.

They have seven guys on the team with more than 400 rushing yards on the season as sophomore Tobias Joyner leads with 630 yards on the ground.

Granted, the three leading rushers for Tarboro in last year’s game against Edenton all graduated, but that doesn’t matter much to Hoggard.

“The thing that sticks out with Tarboro and any great team is that they really play the game hard,” he said. “They’re very aggressive on both sides of the ball and if you make a mistake, they’re going to take advantage of it.”

Hoggard acknowledged that his team’s size matches up a little better to Tarboro than it has been in the last two meetings, but they still don’t quite have the size of the Vikings.

The Aces (12-0) have gone about their season, though, in a similar way to Tarboro blowing out every one of their opponents aside from just hanging on for a win at Northeastern earlier in the season.

Senior Mitjonta Stanley will be starting his fourth consecutive game at quarterback after sophomore Landen Hoggard went down with an injury and the offense hasn’t lost a step.

Malachi White, Quan Twine, Teddy Wilson and Cameron Grimstead have all helped bridge the gap at running back since Stanley moved back behind center for the first time since his sophomore year.

Edenton put up 49 points in its second-round game against North Stanly and 61 against Manteo last week.

While last week’s game turned into a 61-20 blowout win for the Aces, it’s the start of the game that Hoggard is looking to avoid when they face Tarboro tonight.

Manteo jumped on top 14-6 with back-to-back one-play scoring drives in the first quarter and then recovered a fumbled kickoff before Edenton’s defense stopped them and the team eventually rolled to a 54-point first half.

“We play the first few minutes of the game like we did last week, it’s going to be over before it started,” Hoggard said. “You’re playing against a great team. If you make mistakes, you don’t have a chance. We’re going to have to play well coming out of the gate.”

Edenton is looking to get back to the state championship for the first time in three years when it faced but ultimately lost to Reidsville in the 2A title game in 2016.

Friendly Wager: For the game, the Vidant Chowan and Vidant Edgecombe hospitals have placed a little bet.

The basket will include things like Tarboro Brewing Company beer, “Tarboro” soap, an issue of this week’s Tar River Times and tissues “to wipe (Harvill’s) tears.”

In response, a Facebook post from Vidant Chowan said Harvill was excited about the basket as he called it a “congratulatory basket” since they believe the Aces will win.

The post said that Harvill will give Heins a consolation prize that includes Edenton Coffee House coffee, Jimbo’s Jumbo peanuts and the latest edition of the Chowan Herald.

The Eagles are looking to get back to the 2A state title game for a second straight year.

Like Edenton, Northeastern will be on the road as it faces the No. 1 Clinton Dark Horses (12-1) tonight in the 2A NCHSAA East Regional final.

The Eagles, who were the No. 1 seed and home team in last year’s 2A regional final, are playing their second consecutive road playoff game this year after not having played in one since 2015.

NHS, however, has been just fine on the road winning all seven away games it has had this season. It has been against stiff competition too against teams like D.H. Conley, J.H. Rose, Indian River (Va.), Rocky Mount and league-foe Currituck.

Head coach Antonio Moore is happy to have his team back in a position to potentially return to the state title game.

“Considering the little slump we had in the middle of the season, it feels good to be fortunate enough to get back and get a chance to be able to go back to a state championship,” he said.

The little slump Moore mentioned was the three-game losing streak they had after winning four tough non-conference games to begin the season.

All three losses came in their first three home games as the third and final loss of the stretch came when junior quarterback Deandre Proctor broke his collarbone in the conference opener against Hertford County.

Since then, the Eagles have rolled winning seven straight games as senior Holden Hodge, who has been a dynamic athlete for NHS the last few years, took over the QB role.

“Hodge is getting better each week,” Moore said.

Last week was the first game back in eight weeks for Proctor as he and Hodge split time behind center.

The two helped lead Northeastern back from an early 12-0 hole as the Eagles beat No. 2 SouthWest Edgecombe 35-20.

Between last week’s comeback and a couple other ones in tough non-conference play early in the season, Moore noted how much the adversity they have faced helps them as they prepare to face the No. 1 seed on the road.

“At some point in a game, adversity will hit you. You just have to know when it’s there and be able to prepare for it mentally,” Moore said.

The Eagles will have both Proctor and Hodge play at quarterback again tonight as he noted Clinton, who has cruised in each of their 12 wins this season, also tends to use two quarterbacks.

When it comes to passing, it’s usually junior Payson King for the Dark Horses who has a little more than 600 passing yards this season.

Their main threat, however, is on the ground as senior J’Daques Wallace has rushed for nearly 100 yards per game with 1,236 on the season and 17 touchdowns. Following him is junior Davion Smith with 871 yards on the ground this season.

“It’s going to be a dog fight,” Moore said. “We just have to not turn the ball over. If we can win the battle of the turnovers, then we can win the game. I really believe that.”

Moore noted that the attitude and the team’s ‘intestinal fortitude” has been clicking for the Eagles lately.

“As long as we can keep that, that’s half the battle,” he said.