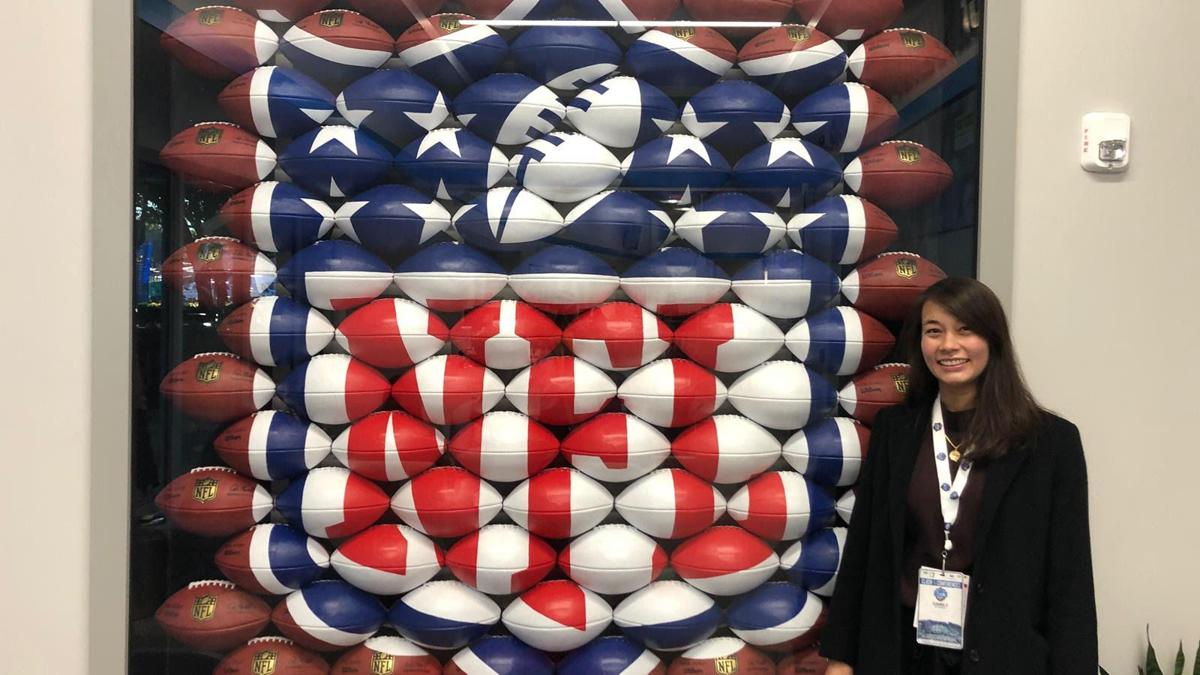 Kjahna O attended the NFL’s Women’s Career in Football Forum, a two-day, invitation-only event that coincided with the NFL Scouting Combine in Indianapolis, Indiana in February. 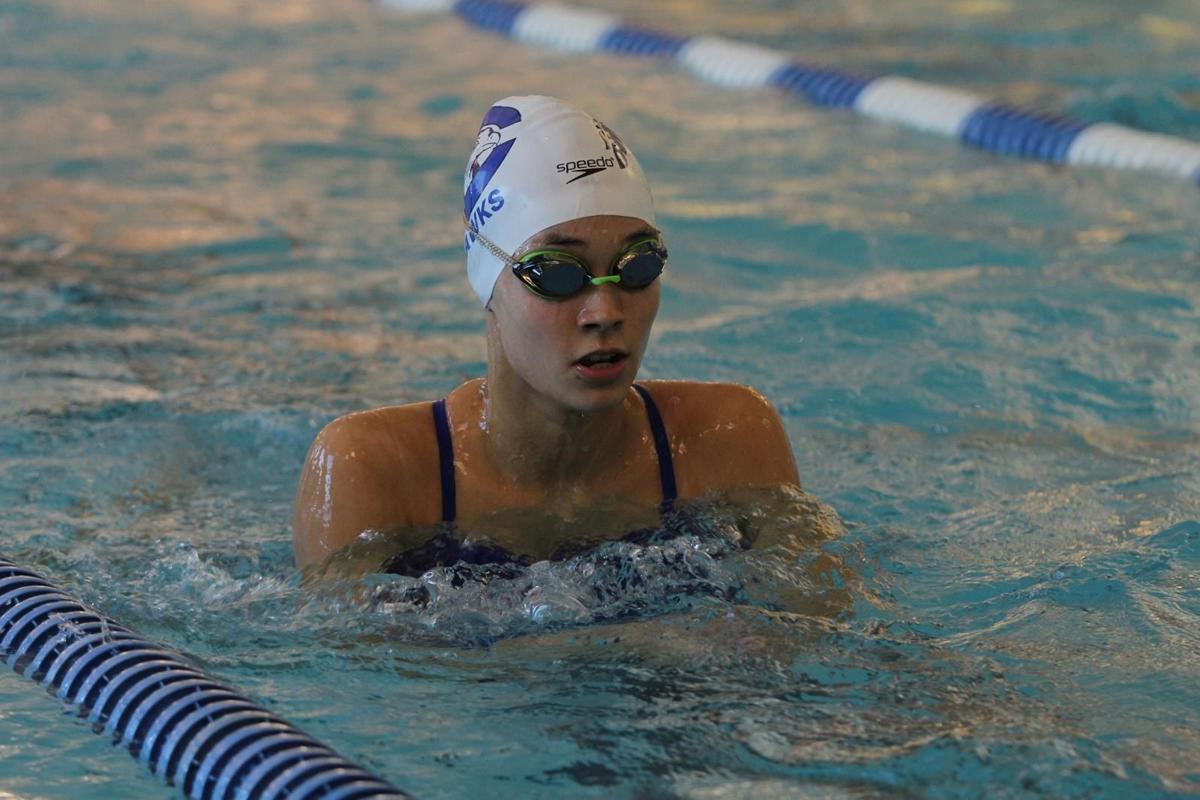 Kjahna O was a member of the Chowan University women’s swimming team.

Kjahna O attended the NFL’s Women’s Career in Football Forum, a two-day, invitation-only event that coincided with the NFL Scouting Combine in Indianapolis, Indiana in February.

Kjahna O was a member of the Chowan University women’s swimming team.

ATLANTA, Ga. — When friends of Kjahna O are asked to describe her in one word, the inevitable responses are: trailblazer, pioneer or record-setter.

At the tender age of three, one of her aunts threw her in a public pool in Orlando, Fla.

O embraced the sink-or-swim proposition with great gusto, eventually becoming the first person in her family that learned to swim.

She even tied the world record for the shortest last name, thanks to her Korean ancestry.

“When my grandparents immigrated to the United States, they were asked to translate their last name into English,” Kjahna said. “The Korean language is written in characters, not letters. They just said it sounds like ‘O.’ So, that’s the name our family adopted.”

Little did she know that her career milestones were just beginning, and someday she would be cashing her first paycheck as a member of the NFL’s Atlanta Falcons.

Raised in a single-parent household, Kjahna and her younger brother (Jake, now 20) moved to Manhattan Beach, Calif. with their mother (Gloria O) when she was seven. Her love of swimming only grew on the West Coast, as she joined the Dolphins Swim Club and excelled as a sprinter.

“I never took a swim lesson in my life,” she admits. “I was just naturally talented. Through the years, coaches tried to fix my stroke but I always reverted back to where I felt comfortable.”

Her prowess in the water continued at Miracosta High School, where she was a four-year varsity member, three-year team captain and a qualifier for the California Interscholastic Federation (CIF) Meet three out of four years.

Meanwhile, Kjahna’s interest in sports went well beyond swimming. At a young age, she became an avid fan and TV viewer of pro and college football.

“Really, I was enamored by all sports,” said the well-spoken 24-year-old. “Growing up in Manhattan Beach, I became a big fan of Pac-12 football. I had a couple of uncles who attended USC (University of Southern California).”

A National Merit Scholar in high school, Kjahna earned an academic scholarship to the University of Arizona upon graduation. Yet, the joy and exhilaration of attending a Pac-12 school was short-lived. Paul Sizemore, a close family friend in Southern California and father figure to her, passed away as she began her first semester. It affected her deeply.

“It was really hard to accept,” she admits. “I asked myself, ‘What is happening?’ While I dreamed of swimming for a Pac-12 school, I decided I would not swim and just focus on my academics. I was too emotionally shaken.”

Very soon, she realized that a large-enrollment university like Arizona was not a good fit.

“There were a thousand kids, literally almost a thousand students in one theater classroom. I couldn’t learn that way. I was not only looking for top sports competition. I really cared about getting a great education. I wanted to pursue beyond my Bachelor’s Degree. If I couldn’t handle learning at Arizona, I knew I wouldn’t have the opportunity to go to graduate school.”

So O, who continued to compete on a club swim team in Manhattan Beach that following summer, began to receive new athletic and academic scholarship offers from various other colleges. Chowan’s small campus and class size environment, not to mention the launch of a brand new swimming program, greatly appealed to her.

She soon packed her bags and drove east to North Carolina. While she was initially recruited by then head coach Matt Hood as a sprinter, soon she became the Hawks’ Swiss Army Knife.

“As a first-year program, we had a lot of holes to fill and I was pretty good at everything,” she said. “I became our utility player, so to speak, and did whatever the coach wanted me to do.”

“I always had it in my mind that someday I would work in the National Football League,” she said. “I thought my best chance might be to become a general counsel for a NFL team, so my plans were to go to law school.”

Those plans were proceeding nicely, as she scored well on her Law School Admission Test (LSAT) and had been accepted at multiple universities, including the University of Mississippi and William & Mary.

However, Kjahna had a sudden change of heart. While still seeking a future career in the NFL, she realized that she wanted to be “closer to the game.”

“I decided to defer law school and take a year off,” she said. “In the first two months, I knew I had made the best decision of my life. The more and more I researched, and found examples of women working in football operations and scouting, the more I knew that was what I wanted to do.”

O decided her next career step should be pursuing a Master’s Degree at a college that offered a Sports Management and Entertainment program. She applied to five schools and chose the University of South Carolina.

Always willing to test her capacity, Kjahna did not stop there. As soon as she arrived on the Columbia, S.C. campus, she marched into the Gamecocks’ football office and knocked on the door of Matt Lindsey, South Carolina’s Director of Player Personnel.

“They had already filled all graduate intern positions, but I offered to work for free to gain experience,” she said. “I figured having SEC experience under my belt might help me down the road.”

O spent most of her time splicing together video clips of potential recruits, assisting in recruiting and attending practices to assess the Gamecocks’ roster.

“As a former athlete myself, none of this was foreign to me,” she added. “Categorizing body types, researching recruits for intangibles like character, it all seemed fairly easy to me.”

Her aptitude and work ethic did not go unnoticed. She had applied and was offered summer internships with the NFL Player Personnel Office and the Indianapolis Colts this past January.

Then one afternoon that same month, she received a letter with the NFL logo in the top left corner. It was an invitation for her to attend the league’s Women’s Career in Football Forum, a two-day, invitation-only event that coincided with the NFL Scouting Combine in Indianapolis, Ind. in February of 2020.

Professor Morrison, the former Panther president, was her greatest advocate. O and other graduate students earned hands-on experience in his class, which included filling assignments for the Belk Kickoff Game, the ACC Championship Game and the Belk Bowl college postseason game, all played at the NFL Panthers’ Bank of America Stadium in Charlotte, N.C.

She impressed Morrison with her attention to detail and organization, handling a myriad of duties in game hospitality and operations.

One of only 40 women invited to the NFL Forum, Kjahna attended presentations by such NFL executives as head coaches Ron Rivera (then with the Carolina Panthers and now with the Washington Football Team) and Mike Vrabel (Tennessee Titans) and General Manager John Lynch (San Francisco 49ers).

Initially, she accepted the Colts’ offer. But then the Atlanta Falcons scouting department posted a full-time salaried position (Scouting Coordinator) that O could hardly ignore. In many ways, it was the dream entry-level NFL job she had been searching for.

“I always wanted to have an impact on the game,” she said. “The bloodline of any team is the draft. I may not be a coach or a player, but scouts have a very important job. They create the team.”

Filed under “a good problem to have,” Kjahna knew she needed to juggle her options and keep everyone in the loop.

“I wanted to show due respect to the Colts, so I let them know I was interviewing for the Falcons job. They were so great and understanding.”

“The interview was on a Monday and I heard back from them on Friday,” she recalled.

“What are you doing right now?” asked GM Dimitroff on that Friday.

“I guess it’s going to be a celebratory weekend for you,” Dimitroff continued. “I would like to offer you the job.”

Already in her new position, O is working mostly virtually from her new apartment in Buford, Ga., which is located between the Falcons’ offices and training complex in Flowery Branch and Mercedes-Benz Stadium in downtown Atlanta where the team plays its games. Among her initial duties are helping area scouts, coordinating travel, college draft preparation and scouting the NFL Combine and college All-Star games.

Rushell Harvey, who had served as on-campus recruiting coordinator at Tulane University, joined O as a scouting coordinator with the Falcons (NFL.com). They are one of a handful of young females recently filling traditionally male positions in professional and college sports. Understandably, these women have captured headlines in national and local media outlets as news-makers.

But Kjahna would just as well work behind-the-scenes as a key member of her new team.

“When it comes to being a woman in any sport, I don’t like the recognition,” she admits. “To me, I’m not the first. There have been women who have come before me and to focus on me is doing them a disservice. All of the pressure was on them, not on me.

She points to Connie Carberg, who joined the New York Jets as the first female NFL scout in the late 1970’s, and current Manager of Player Personnel and College Scout Kelly Kleine of the Minnesota Vikings.

It’s hard for Kjahna not to think about the distance she has traveled to reach her goal. That distance was far greater than the length of a football field.

“When I was little, people would ask what I wanted to do when I grew up,” she says. “I would always tell them I want to be a NFL quarterback. I played flag football through middle school and wanted to try out for the high school football team. I was told, ‘Hey look, it’s cute you want to try out but you really shouldn’t.”

She thinks that may be why she gravitated toward scouting.

“How can they evaluate me when they have never seen me? I think character means a lot. Sure there are guys who are ultra-talented, but there are also guys who just work their butts off and become good players.”

As for those old school types who question whether women can do the job in a male sport, O deflects that notion like she’s merely swatting an annoying insect.

“Everyone has haters and doubters,” she admits. “I’m very hard-headed and could care less what people say. I know I believe in me and that’s all that counts.”

As she dives into the deep end of the pool of big-time professional sports, Kjahna has already set her sights on her ultimate goal.

“I want to be the Director of College Scouting for an NFL team someday,” she flatly states.

Asked whether she might be stepping on some toes, suggesting after two weeks on the job that she could eventually replace someone currently in that position?

“They already know,” she says with a smile.