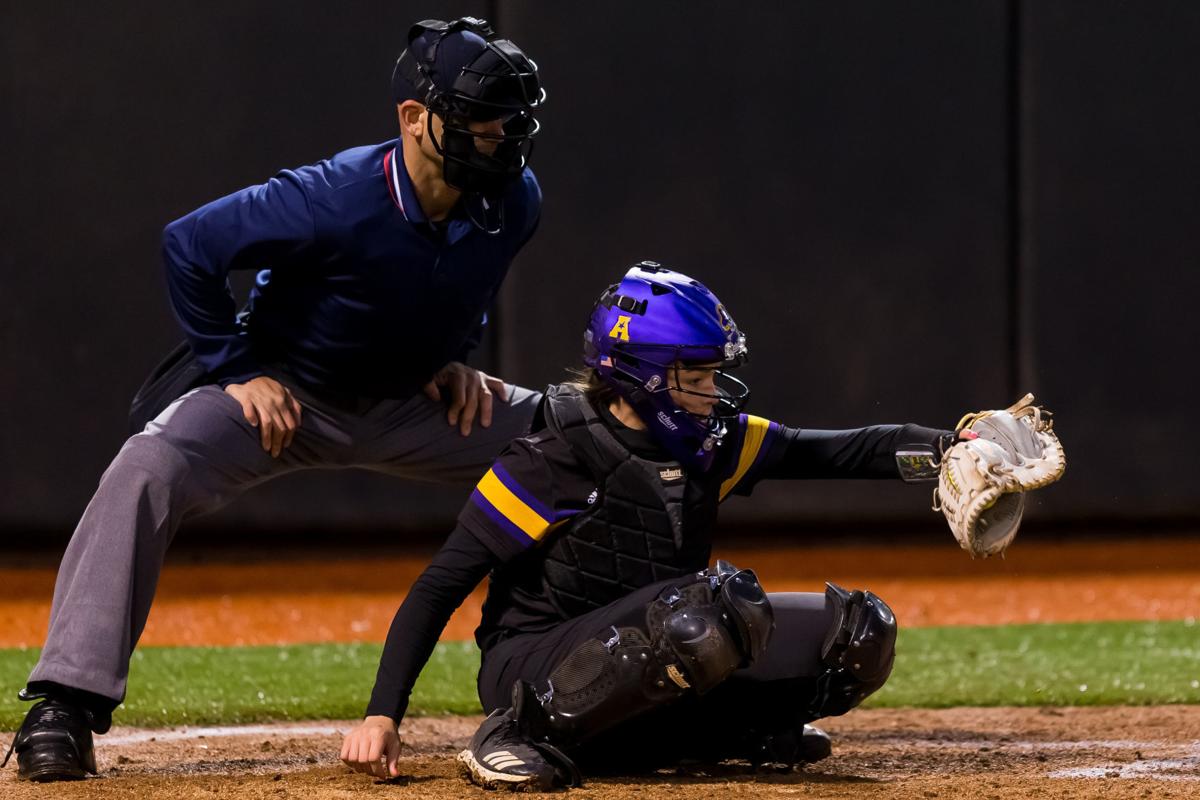 Abigail Umphlett (right) was a catcher for the East Carolina University softball team for four seasons. 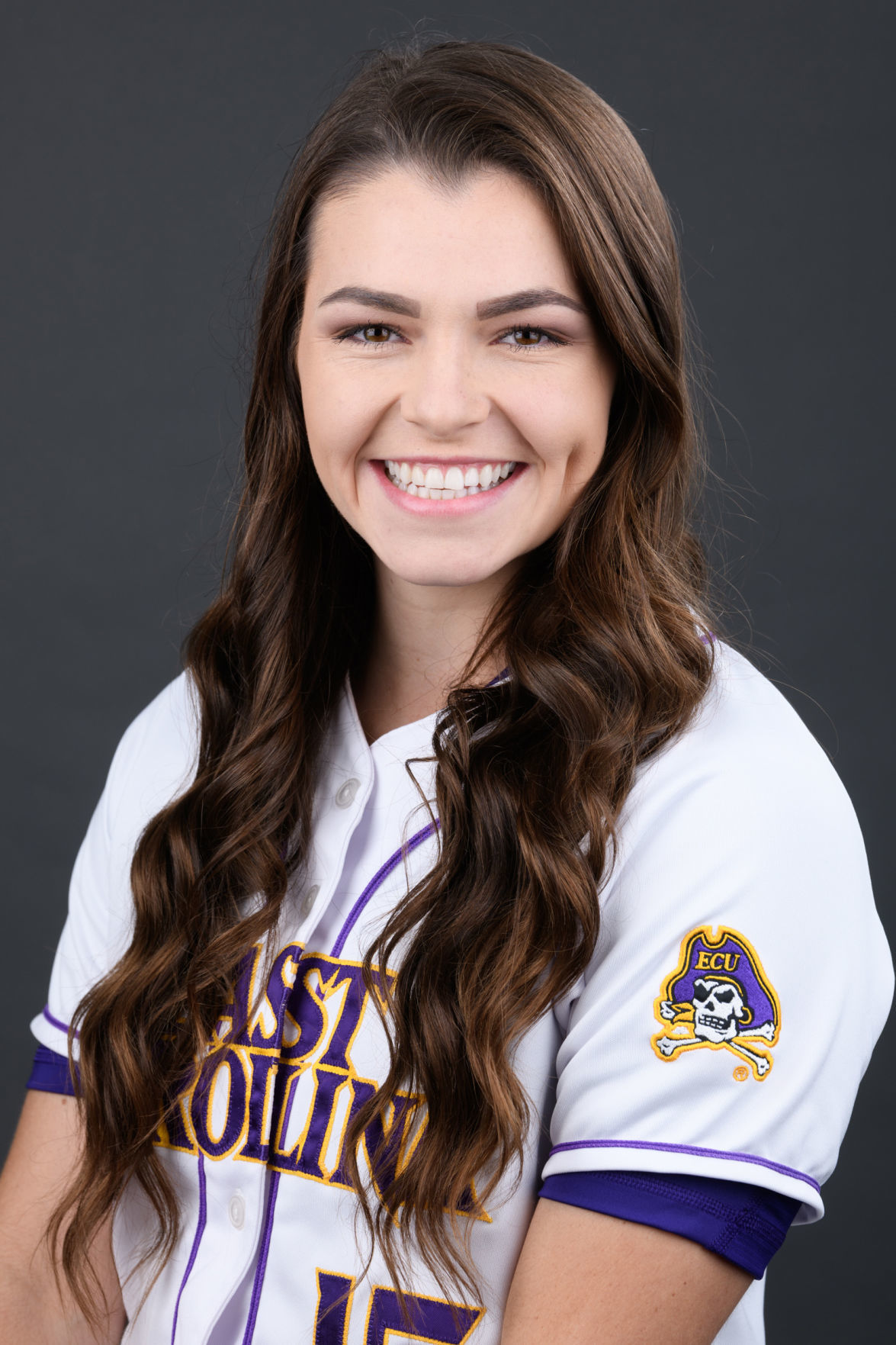 Most softball players have the desire to play the sport at the NCAA Division I level.

Umphlett, who is from Elizabeth City and played her high school softball at Northeastern, was a four-year member of the East Carolina University softball team.

Her experience in Pirate purple and gold will be an experience that she will never forget.

“Overall, it was a great experience,” Umphlett told The Daily Advance in a telephone interview Wednesday. “It was challenging and, at times, a learning experience. It was a great opportunity to find out who I was as a person and as a teammate. Overall, I had a great time.”

She added that as a member of the ECU softball team, she has made friends and the coaches were great to play for.

Umphlett’s first season on the team was in 2017.

She recalled being nervous and excited the first time playing in a game for ECU.

“I finally made it,” Umphlett said. “Every little girl has the dream of playing in college. I remember just taking it all in and being so excited and feeling so blessed to be on the field at East Carolina and in that uniform.”

That dream for Umphlett began at the youth softball level when she played for Camden County Babe Ruth All-Stars.

That led for her to also play travel softball during her prep years.

After getting limited playing time her first two seasons at ECU, primarily as a pinch runner or hitter, Umphlett had her playing time increase last season as a junior.

She played in 22 games with 15 of those contests as a catcher.

She acknowledged that it was an honor to be on the field with her teammates and put her best effort forward.

“It was exciting that I finally got that opportunity and to be able to help my team accomplish as many wins as possible,” she said.

The 2020 season was trending in a good direction for Umphlett and the Pirates.

Umphlett had a .250 batting average in 14 games. Thirteen of those games, she was a starter.

Defensively, she had a perfect 1.000 fielding percentage, had not committed an error and was 61-of-65 on put outs.

She went 2-for-3 with a double and a run scored in what would be her last college game March 8 against North Dakota State at the Fresno State Bulldog Classic in Fresno, California.

In recent seasons, ECU softball was around a .500 team.

Umphlett acknowledged that she thought this was the year ECU softball would go far.

“Our team was very talented and full of depth at all positions,” she said. “If one person was off, the rest of the lineup would pick them up. It was a fun time being out there on the field.”

She added that the ECU lineup was doing well.

The Pirates had a 14-9 overall record and were on a three-game winning streak.

Then the coronavirus pandemic brought sports in the United State to a stop when professional basketball player Rudy Gobert of the NBA’s Utah Jazz tested positive for COVID-19 on March 11.

Gobert’s positive test set off a chain reaction of games and seasons across the country at the youth, college and professional levels being postponed and/or canceled.

Umphlett noted that the team was aware that there was uncertainty on if the season would continue.

The American Athletic Conference — the league that ECU is a member of — jointly with its other member schools suspended games on March 12 then canceled all spring sport seasons on March 16.

The ECU coaching staff informed the players that the season was over.

What made the sudden ending difficult for Umphlett was the friendships she had made during her time on the team.

“All four of my years, we’ve always been a very close-knit team, especially this year,” she said.

Although having the season cut short due to the coronavirus outbreak was disappointing, Umphlett said the team remains close and the situation has brought them closer.

The NCAA Division I Council is expected to decide this week on extending eligibility for spring sports athletes impacted by the coronavirus pandemic.

Umphlett has made the decision to move on from ECU softball.

She is on track to graduate from ECU this spring and plans to enroll at Brigham Young University’s J. Reuben Clark Law School.

“I would love to take my fifth year and play another year with everybody,” Umphlett said.

Umphlett added that she expects the 2021 Pirates will essentially be the same team that was on the field this spring.

“It was a tough decision, but law school has been something that has been my No. 1 goal,” Umphlett said. “At this time of my life, I felt it was the right time to go ahead and go to law school in the fall.”

“Abbie Umphlett has played a huge role in creating our team culture. She leads by example both on and off the field,” Oliver said in a statement Thursday. “She is one of the most genuine players I have ever had the pleasure to coach, and we are going to miss her dearly. I’m so proud of what she has accomplished. It couldn’t have happened to a better person!”

Umphlett is familiar with BYU’s campus as her sister Caroline Umphlett was a member of the BYU softball team for two seasons in 2012-13.

Abigail noted when Caroline was at BYU, she would go to Provo, Utah to visit her.

Abigail recently made a visit to BYU’s law school in January.

During her visit to the law school was when Abigail knew BYU was the school for her.

“It’s a great university. It has a great atmosphere,” Abigail said. “It was everything I wanted in a law school.”

Since the COVID-19 outbreak, ECU transitioned from a majority in-person class instruction to online instruction for its students.

Abigail is completing her final semester of 12 credit hours.

Her time at East Carolina University has made an impact on her life.

“I’ve enjoyed every moment here,” Abigail said. “I loved the atmosphere. It’s family oriented. Being an athlete here, they make you feel so special. The university has done all they can to provide us with everything. All the professors are so welcoming. I feel like this experience I’ve had at ECU is not one that I could have had anywhere else. I wouldn’t want to be anywhere else. It truly made me appreciate Pirate Nation and northeast North Carolina in general. I love it here. It’s been great.”